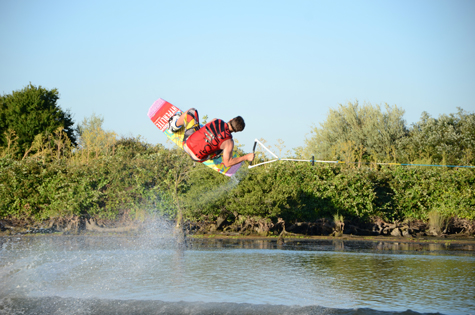 There are two words that come to mind after getting to know Sacramento-based wakeboarder Brodie Chaboya during a recent interview that went into the wee hours of the night at Kilt Pub: passion and dedication. Not only has Chaboya spent half of his lifetime pushing himself to progress in the sport he so desperately loves, he’s also spent countless hours teaching and coaching others, spreading his infectious joy for wakeboarding. Simply put, he is an ambassador of the sport. A self-proclaimed “31-year-old kid,” Chaboya is living the dream, despite getting the occasional, “When are you going to get married?” or, “When are you going to buy a house?” from family members. He’s part of the national-level Hyperlite Wakeboards Legion Team, he manages the NorCal Hyperlite men’s team, he gets to wakeboard behind crazy-awesome boats every day and just last year he purchased the company at which he had previously worked for years, Launch Wakeboarding School. “One of my buddies told me, ‘It’s the American dream, you’ve been working for the company for so long and now you own it. How much more perfect could it be?’” Chaboya smiled, sipped his beer and said, “At this point I really can’t complain, it’s everything I ever wanted to do and so much more.”

Chaboya grew up in San Jose and was bitten by the wakeboard bug early in life. What started out as recreational skiing, kneeboarding and tubing with his family on local lakes quickly turned into an obsession. “I was probably about 16,” Chaboya remembers, “And I saw somebody go by on a wakeboard one day, well, back then it was called a ‘ski board,’ and this guy came by and did a back roll or something, just right in front of us. He was just full-on inverted, landed, rode by and I was mesmerized. I said, ‘Mom, I want to do that! I want one of those!’ So the next year I got a wakeboard for Christmas.”

That same year, Chaboya’s father bought a Mastercraft tournament ski boat, a huge step up from the runabout family-style recreational boat he had been riding behind. Now he had the board and the boat, but one critical piece was missing: the inspiration and motivation that can only be brought on from watching professional athletes at work. If you’re going to go skateboarding, you watch a skate video; if you’re going to go snowboarding, you watch a snowboard video; if you’re going to go wakeboarding, you watch a wakeboard video. It’s a ritual. So, Chaboya bought the “most hardcore” video out at that time, Gravity Sucks, which is, to this day, considered a classic among wakeboard enthusiasts. “So I got that video and I watched it every day, I was all stoked and fired up,” remembered Chaboya.

“I still have it to this day on VHS,” he said with a laugh.

From there his passion for the sport skyrocketed–and no longer was it just weekends that he was itching to go out and ride, it was all the time. Chaboya and one of his closest riding buddies even went all the way to Florida for an intense weeklong wakeboarding camp. “It was a big deal to go to a camp and ride our butts off for a whole week,” Chaboya said. “We had our own private coach, and it was just me and my buddy and our private coach just riding all day, every day. By the third day we were just dead tired. We could barely move. But we came back and we had learned a ton of stuff.” 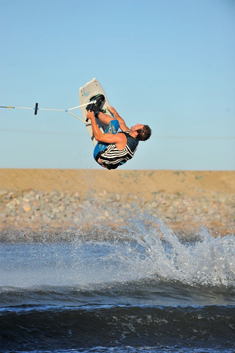 Through being an all-around ripper on a wakeboard and his job working the pro shop at Cope and McPhetres Marine in Santa Clara, Calif., Chaboya was introduced to a bunch of industry connections, including an HO Skis/Hyperlite Wakeboards rep by the name of Joe Sassenrath. “I met him while working the shop,” Chaboya said. “He would come in and he was the total cool guy. He’d do demos and stuff, so I’d get to go on those.” Chaboya recalled one particular day where he was riding a board with “the hot new technology at the time” behind Sassenrath’s boat. “I threw down a decent set, rode pretty good, and I get back in the boat and he goes, ‘Hey, you rode really good on that board!’” Impressing Sassenrath with his skills was one thing; impressing him with his work ethic was another. “I started off riding for him and Hyperlite as a local and regional rider. It was basically just getting hooked up with product here and there and I’d go work sales and stuff, whatever I could do. You kind of earn your keep by helping out. If Joe needed help, I was there.”

Chaboya moved to Sacramento in 2001 to attend Sacramento State and kept in close touch with Sassenrath, who lives in Rocklin. Again, the young wake-rat showed his enthusiasm. “I just started working and doing everything I could,” Chaboya said. “I’ve pretty much been his right hand man since then for all the boat shows, wakeboard clinics, demos, sales, everything.” Also while at Sacramento State, Chaboya was re-connected with an old mentor of his, Ryan Fraser, who had helped teach him how to do one of his first inverted tricks way back when Chaboya was coming up. Fraser had started Launch Wakeboard School and was running lessons out of Folsom Lake. Naturally, Chaboya got a job as one of his coaches. “It was a killer gig while going to college, you know, making $12 an hour coaching wakeboarding. I couldn’t have been happier, it was a summer job and I got to ride every day. I was like, ‘Does it get better than this?’” The days were long and hot, though, as the company was booming, being among the top wakeboard schools in the region, maybe even the state. Twelve-hour days in 100-degree heat were commonplace in peak season and eventually it wore Chaboya down. “It was out of control, it was just crazy,” Chaboya remembered. “I couldn’t believe it. It was all day, every day.”

Eventually the two had “a little bit of a falling out” and Chaboya left the company. While he was gone, Fraser sold Launch to another one of Chaboya’s long-time riding buddies, a guy by the name of Ryan Ash, and according to Chaboya, “He just kind of let it go downhill. He just didn’t know what he was doing. He wasn’t the type that would be at the boat shows; he wasn’t in the industry.” Over the years, Ash would hit up Chaboya here and there to teach lessons, and he did, but eventually the company, much like the economy, started tanking and Ash just wanted out. “So last winter he was like, ‘Hey man, I’m done. This company fits you perfectly. You should just take it over. I’m done with it, I’m ready to throw it away.’” 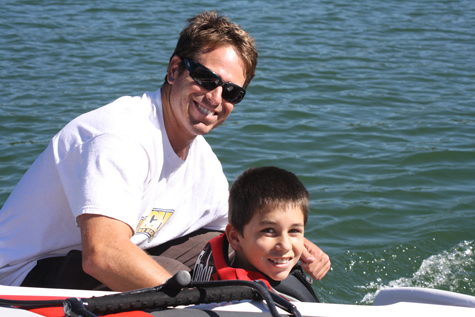 Chaboya with a young student

Chaboya deliberated and eventually used every dollar he had saved from a gig working for the census and flat-out bought the company, the rights to the website (Launchwakeboarding.com–a site that Chaboya admits is outdated and “old-school”), and the company phone number, (916) 532-WAKE, a number that tends to ring all day as soon as the sun is out. “By the time I took it over it was mid-June last year and Ash goes, ‘I’m getting calls all day, every day, you can make your money back, it’s ready to go.’” Without regular access to a good boat to coach on, Chaboya spent last season doing private lessons on clients’ boats. “It went great,” Chaboya said of his first summer teaching lessons for the company he now owned. “I was getting busy, but not crazy busy. Busy enough to make my investment back, it was a crazy return on investment. I was stoked. I was just missing the boat thing.” 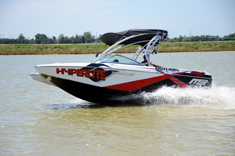 This year is different thanks to the folks at MB Sports Boats out of Atwater, Calif. hooking up Sassenrath and Hyperlite with a 2011 F21 Tomcat (sounds like some sort of jet but it’s really one helluva wakeboarding boat) that Chaboya has frequent access to. “I told them what I was doing and that I was fully insured as an instructor and MB was like, ‘We want that boat on the water every day.’” Now Launch Wakeboard School students will not only ride behind a state-of-the-art MB boat (if the Tomcat is preoccupied Chaboya has access to a number of other quality boats), they’ll also receive top-notch instruction from someone who’s been there, done that. 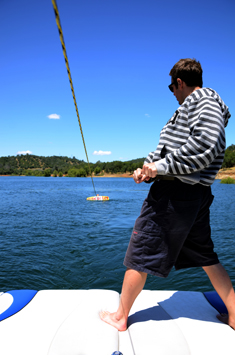 “It’s a whole new level now,” Chaboya said of his recently rediscovered motivation to teach the sport now that the company is his. “I thought I was putting so much into it before, but it was kind of like, after that tenth hour of getting burnt out I probably wasn’t giving it a full 100 percent. Now, it’s like I’m giving it 110 percent every second. I pour my heart and soul into every lesson.” 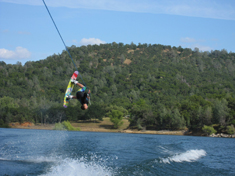 Most recently, Chaboya has been impressed with two 16-year-old students from Elk Grove, Frank Schultz and Ty Piearcy. Both are progressing at a fast rate and are competing regionally. “Every time I’ve gone out with them, they learn something new. For me, it’s like I’ve just been getting this huge over-enjoyment out of it.” He pointed out that the week he spent in Florida with a personal coach when he was a youngster still to this day plays a role in how he teaches others. “I kind of attribute a lot of the stuff I coach these days to that, like how to break things down for people and whatnot.”

The majority of Chaboya’s lessons are with beginners, and he says that he’s fine with that, to him there’s nothing like getting someone standing up on a wakeboard for the first time and getting them hooked on the sport. But, when he does get the opportunity to work with young, advanced riders, like Piearcy for example, he can have a larger impact on their riding. “He’s right at that level where he just needs one little turn of the wrist this way, or to look forward instead of backward, or to get his shoulders squared up, and then boom, he sticks it. I’m always the guy that’s like, ‘OK, you’re right there, one more, one more!’”

Chaboya killing it on the Delta / Photo by Andy Guillinta

Whether you’re a beginner trying to get up for the first time on a wakeboard or you’re an experienced rider and are trying to get inverted (and land on your feet, the most important part), Chaboya is your guy. Age doesn’t matter either, he has already taught 7-year-olds to 63-year-olds this summer. With a most certain determination to get Launch Wakeboarding School back to where it once was when he was just an employee there, Chaboya acknowledged how much things have come full circle for him. “It’s been a roller coaster ride, ups and downs, but it’s just been totally cool. It’s been a joyride!”

Contact Brodie Chaboya for more information about Launch and to learn how you can get out on the water and ride with him by either calling (916) 532-WAKE or by emailing him at bchaboya@gmail.com. Find him on Facebook by searching for “Launch Wakeboarding School.” Also, on the first Saturday of every month this summer you can find him at Swabbies on the River doing board demos all day. Summer is here, get out and shred! 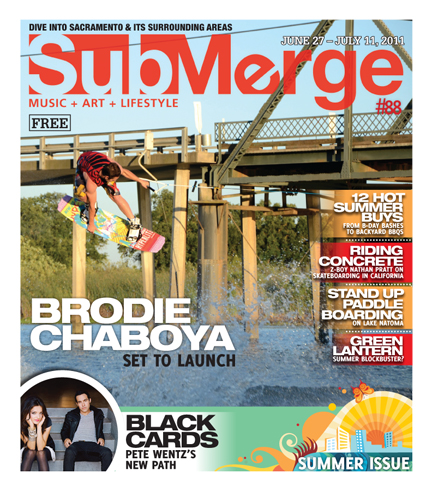