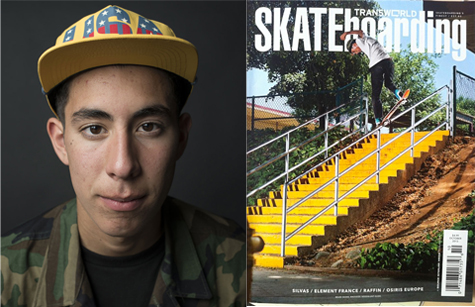 In skateboarding, there are many widely recognized pros in the industry that have roots in the greater Sacramento region: John Cardiel, Matt Rodriguez, Brandon Biebel, Omar Salazar…the list goes on. These guys have been on the international scale for years now (have you seen Salazar in those Levi’s commercials on TV?!), but local 17-year-old up-and-coming skate phenom Miles Silvas is just getting his first taste of major success. Silvas, who technically hasn’t even turned pro yet, landed himself on the cover of one of the industry’s biggest magazines, Transworld Skateboarding. The October 2013 issue features a photo taken a few weeks ago by Dave Chami of Silvas mid-trick on a monster 18-stair handrail in Folsom. It’s an absolutely massive handrail. Tall, steep, intimidating, the kind of feature reserved only for those with the skills (and balls) to hit it. “I had skated that rail a couple years ago, so I kind of had a feeling for it,” Silvas tells Submerge. “But I had been thinking about it for a while now and then went out there just for this trick,” he said of the stylish cover shot.

The trick he’s doing (Silvas thinks it took him nine tries to land it) is a backside noseblunt-slide—and with the handrail being an 18-stair, according to Transworld Skateboarding, it’s technically the biggest one ever done! Nyjah Huston, another famous pro skater with regional ties, has been filmed doing the same trick on a 16-stair rail in Southern California, but Silvas done went and two-upped him. “It feels pretty crazy,” Silvas said. “I wasn’t going for it like, ‘Oh this is the biggest one ever.’ I didn’t even have that in mind, you know? I just did it.”

It’s not completely unheard-of for amateur skaters to get covers of national mags, but it’s rare. “I’ve seen [amateurs] get covers before, but I don’t know how common it is. I usually see pros on the cover,” he said. While he is technically an amateur (probably not for long, after this some company is bound to turn him pro), Silvas is sponsored and backed by a number of legit brands like Lakai shoes, LRG clothing company, Organika skateboards, Royal Trucks, Mob Grip, Small Wheels, PLA Skate Shop in Folsom and locally based hat company Official. Extremely mature for his age, largely due in part to years of skating with older peers, Silvas remains modest about his recent success and is focused on his burgeoning career. “I just want to try to stay healthy and keep skating,” Silvas said. “Continue to be productive, keep traveling, and hopefully just keep it going.” Keep up to date with Silvas on Twitter and Instagram (@miles_silvas).