If you walk down the hall past the hookah smoke of Kasbah Lounge and the smell of Mediterranean food from Tapa the World, you will find it upstairs, tucked in the far left corner. A small room that used to house a tiny church now holds the high-end athletic clothes of Morris Terry (2115 J Street, Suite 212). The two owners, Marisa Minasian, or “Morris,” and Terry Buccat have lent their names to their first clothing line, Morris Terry Athletic, or MTX, which is dedicated to the kind of woman who enjoys a healthy but luxurious lifestyle. Tie-dyed yoga pants, multi-colored sports bras and graphic tees and tanks fill the boutique. White walls and rustic chic decor accent the small space, making it feel rich.

The fact that their initial idea to create a successful clothing line and open a boutique was a high school dream–something Buccat says they joked about–shows that you can’t doubt in their abilities to make things happen. Spoiler alert: It worked out.

“I guess when you put an idea out there, it really does come to life,” Buccat said. 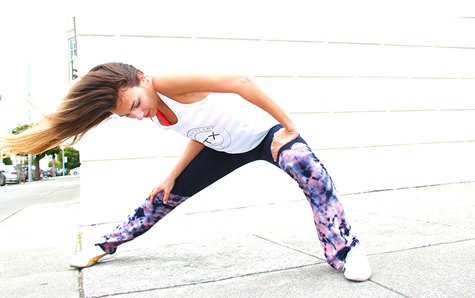 When the girls finished college and reunited, they realized they still wanted to pursue their fashion dreams. They started the company in 2010 and up until now their clothing has mostly been purchased through their website and the 24 nationwide locations that carry their line.

Their first namesake boutique is their answer to the local following they’ve accrued.

“We’ve been really lucky…because we’ve had such a great local following and it’s not something we both necessarily expected… We were just a website, we could be from anywhere but we had a really great local response,” Minasian said.

Their fans started to beg to come into their Sacramento office to try on the clothes. 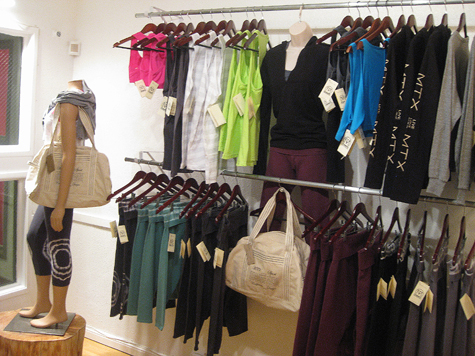 “There was nowhere for you to change… It was just kind of awkward, [but] people did it and it was fine. They were happy. They knew what fit. And that kind of thing just kept happening… It was time… There was that local need,” Minasian said.

The boutique has two dressing rooms to fill the void, a major step up from their office bathroom.

The 300-square-foot store was a strategic move on their part: “We looked at a lot of different spaces, and, honestly, they were mostly too big for us. We’re still pretty small. We didn’t start very long ago. We wanted to be able to fill our store comfortably,” Minasian said.

Minasian and Buccat met when they attended Mira Loma High School together and their dreams of being successful in the fashion industry bonded them for life. Now the 28-year-olds oversee everything: from the signature graphics they’ve drawn themselves to the Bay Area and Sacramento factories that assemble their clothes. 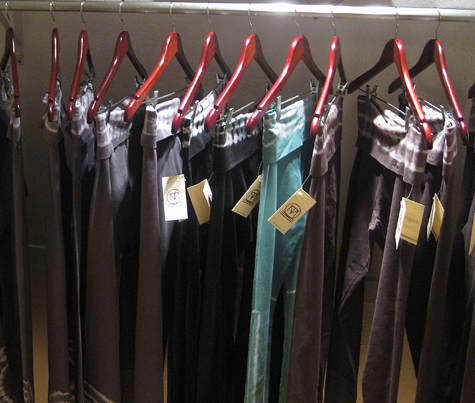 Some of the graphics include inspirational messages in beautiful script and antlers encasing the number 84, the girls’ birth year. The boutique itself has many organic elements like branches and natural wood. The whole line feels down to earth while maintaining the richness of well-made clothing.

“American history really interests us. We make everything here in California. Keeping it local and domestic is really important to us,” Minasian said.

If employing Californian workers by staying local wasn’t enough, Buccat and Minasian are also quite generous when it comes to donating to charity. Every season, they come out with special items that gives back 100 percent. When you purchase the Weekender Bag, the Give Back Antler Tank or the MTX Give Back Tank, all of the proceeds go to HELPS, a Sacramento-based foster agency that funds extracurricular activities for children including sports and arts and theater programs.

Minasian was adopted from Korea at age 3 and Buccat’s family fosters children, so it’s not difficult to see why this charity is so close to their hearts.

The grand opening celebration for the boutique is happening on Dec. 8, as part of Second Saturday. There will be a live band and food provided by local food trucks and bakeries and everything in the store will be 10 percent off. Best of all, with every purchase, the girls will be giving away their Weekender Bag, a large cotton canvas bag adorned with gorgeous script writing, with every purchase, but you have to make it between 5 and 9 p.m. to snag these deals. 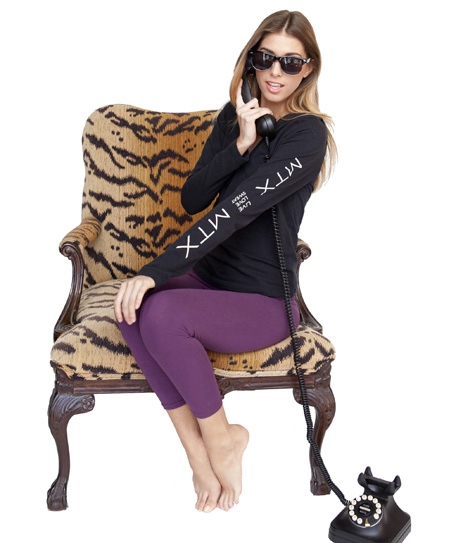 Although the girls are very fond of yoga, Minasian said they like a variety of workouts. The clothes are multi-functional for most any kind of workout you desire.

“I really like doing pilates at home… We both do random cardio. I used to surf a lot more when I was close to the ocean…all kinds of stuff. I like to mix it up,” Minasian said.

MTX is their sport line from which they plan to expand.

“We do plan on branching out into different aspects of a woman’s lifestyle and so there will be other branches that we will call other things,” Minasian said.

They someday plan to create ready-to-wear clothing and even shoes. The latter is something the girls are very excited about pursuing.

Minasian said they would probably start off with workout shoes “to make the flow more natural. But we love shoes of all sorts.”

Most every designer finds inspiration and is driven by their customers. Like a muse, she illustrates a lifestyle that is drawn in clothing. Minasian and Buccat are no different.

“We’re inspired by American luxury lifestyle and this whole idea of the woman who wears these clothes. We’re trying to expand into her entire life… She likes to take care of herself, she has a healthy lifestyle, she likes the luxuries of life and she’s passionate about fashion,” Minasian said.

Be on the lookout for their Spring 2013 line, coming soon. Minasian gave me a teaser of what’s next: “Some new charity items for sure, some very cozy longer sleeve kinds of things, and some fancy pants… Other than that I can’t really say.”

Although the boutique may be hard to find, tucked far back into a building that is mostly known for tapas and hookah, it is worth the mini-adventure. When you leave the store with your new workout wear, you may not only encourage yourself to hit the gym more often, but you have also become the opulent woman that Morris Terry Athletic represents; and that in itself is inspiring. 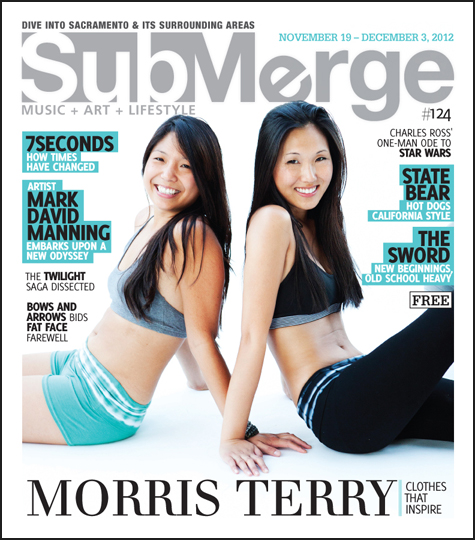 Come out for the grand opening of the Morris Terry Boutique at 2112 J Street in Sacramento. From 5—9 p.m., enjoy hors d’oeuvres, drinks, live music and 10 percent off everything in the store. Shoppers will receive a free Weekender bag. For more info, go to http://morristerry.com/.