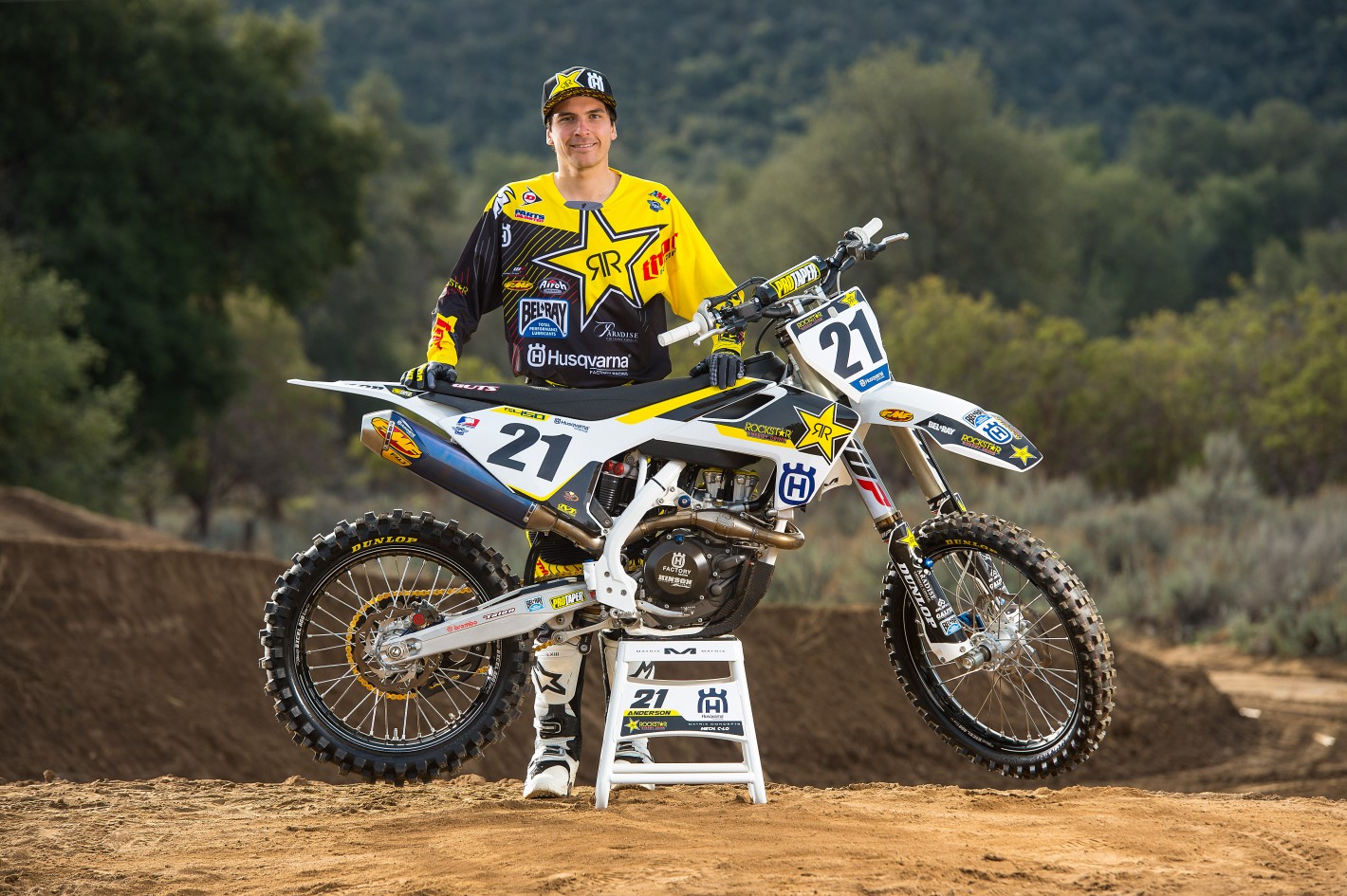 Supercross and motocross, although completely different beasts, both have their challenges. Whether a racer is competing in a supercross race under the lights in a stadium or in a motocross race outdoors at an equally well-groomed track, all competitors have their strong suits.

Rockstar Energy Husqvarna Factory Racing’s Jason Anderson, arguably one of the fastest living racers, now finds himself poised to take third in a long and arduous Monster Energy AMA Supercross Series. And although his rise to fame and good fortune did not come without hard work, he has already proved himself a veritable force that not even top riders such as Ryan Dungey and Ken Roczen can dismiss. He handily won the 250cc AMA Supercross Lites West championship aboard a KTM motorcycle, a company that not-so-coincidentally owns the much smaller yet equally competitive Husqvarna.

While the brand hasn’t placed in any significant motocross standings—here in the United States, that is; Alessio Chiodi was crowned Motocross World Champion in the 125cc class in 1999—a new, energized Husqvarna team is now led by 450cc racer Anderson along with equally talented teammates Martin Davalos, Zach Osborne and Christophe Pourcel.

What separates the 23-year-old Anderson from other motocross racers consistently placing in the top five, however, is his choice of motorcycle: Husqvarna. The brand that started making racing machines in 1903 back in Huskvarna, Sweden has, consequently, come back in a big way in both 2015 and 2016 after a lengthy absence from outdoor motocross in the United States.

Now in its 48th year,  the 2016 Hangtown Motocross Classic kicks off the 2016 Lucas Oil Pro Motocross Championship May 21 at its usual Prairie City State Park location in Rancho Cordova. Although many have their eyes on reigning Supercross champ and KTM rider Ryan Dungey, Suzuki’s Ken Roczen, Kawasaki’s Eli Tomac and Yamaha’s Weston Peick to name but a few, a closer look at the guy donning white plastics and Rockstar gear is fully warranted.

As luck would have it, the Rockstar Energy Husqvarna Factory Racing team—now in its second year—recently re-signed Anderson and gave fellow racer Christophe Pourcel his first full time 450cc contract in the United States. Additionally, the upcoming motocross series serves as a litmus test for the Husqvarna brand and showcases the company’s new FC450 machine.

Ahead of this month’s Hangtown Motocross Classic, Submerge recently caught up with Jason Anderson as he was driving to Las Vegas from his home in California for the Supercross 2016 season-ending race at Sam Boyd Stadium. 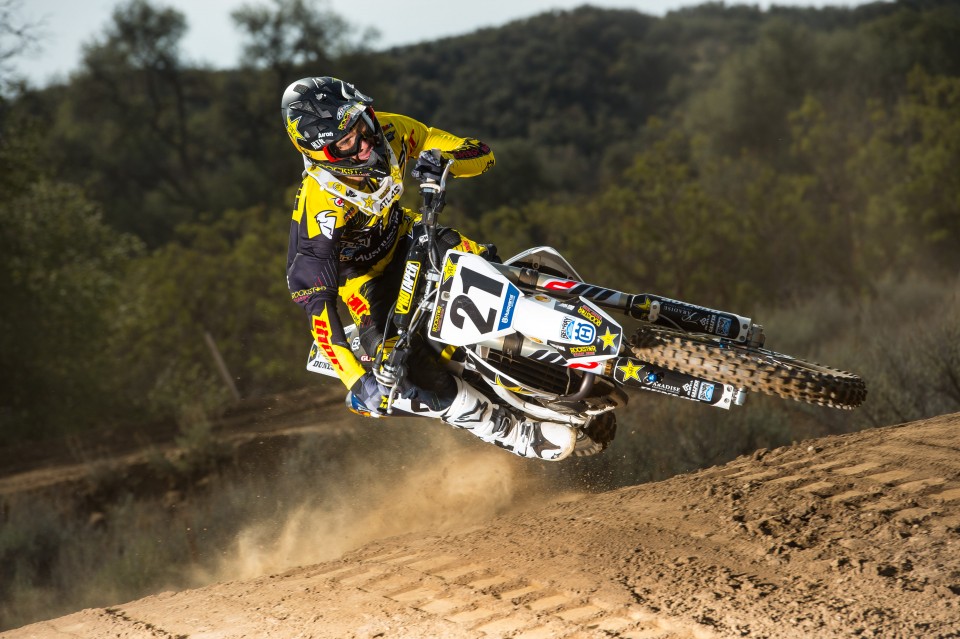 What is your method for getting good starts aka holeshots? I’ve watched your clutch hand both live and on TV. You’ve got it down pat.
Thanks. Good starts really come down to getting a good spot at the gate during timed practice and qualifying races. Of course, my team and I try to perfect the art of holeshots as much as we can. It makes it rather tough if you have a good gate pick but the track and ground pack is bumpy or clumpy. Also, you have to start with a consistent style. A good starting gate pick, like I said, always helps.

What setting does Jason Anderson find himself more antsy or nervous than usual? Supercross? Outdoor motocross?
That’s a good one. It’s hard when you are on the line at a stadium and have all these nerves going through you. It really doesn’t matter if it’s at a supercross event or motocross track since we all want to place high and have great vibes at every race. I totally get nervous for both of them equally.

You’re always the first to try crazy jumps and were the first rider to try Hangtown’s 150-foot triple jump last year. Very few pros did it aside from front-runners and Justin Barcia, who made it look very easy like yourself. What goes through your head when trying anything of that size for the first time?
Obviously, you have to pick the fastest line. You can’t launch without it. After figuring that out walking the track before practice and riding over it a couple of times, you either have to go for it or not. As far as being indicative and trying different lines, it’s a choice each rider makes on his own and the answer is never really obvious. I get nervous just like anyone else but I am pretty confident these days, at least in my riding abilities. Sure, there is a huge risk we play with every day, but pro motocross racers at this level and money stakes this high always play with fire. 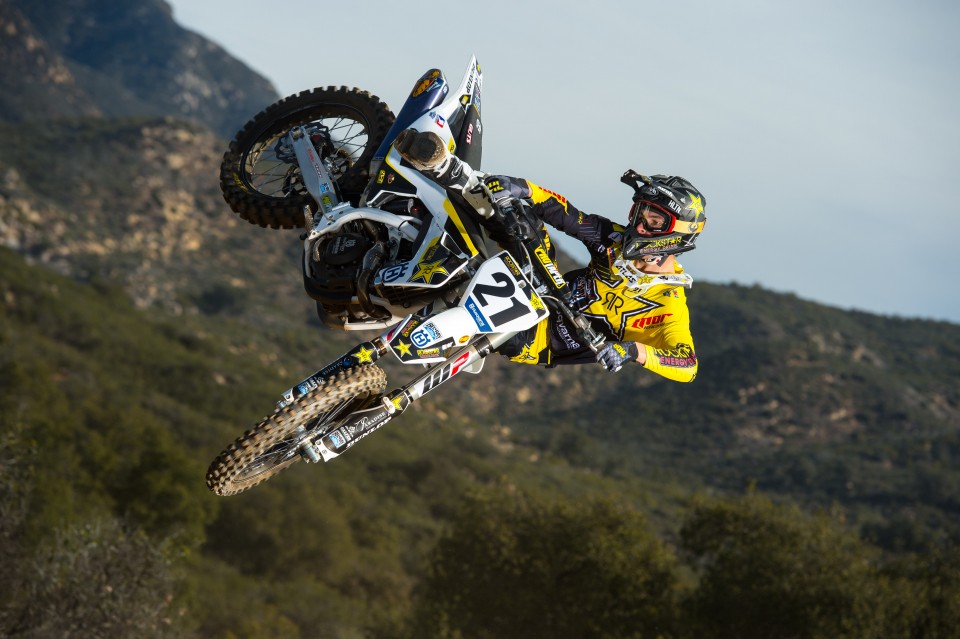 How does one prepare for a faster-than-usual supercross track?
For any supercross race, you always want to walk the whole track. That’s very very important. I look at triple jumps, rhythm sections, corners with quickest in and out and much more. The real difference with supercross as opposed to traditional outdoor tracks first is how steep the lifts on the jumps are. You need to look at all the lines, not just some as in outdoor motocross, and figure out your own pace and rhythm as well as coordinating when and where you pull the trigger. I won’t lie: it is very tough to figure out what you want to do each race.

Any bad crashes that you remember most?
I got a really shitty start at the East Rutherford race and had to come through the pack and still placed sixth. Not my best but no crash. The last track I crashed was with Justin Bogle when he crashed on the first lap and I hit him. I had nowhere to go and that was in Toronto, Canada. At the end of the day, it’s not anyone’s fault as we’re all going for it.

Have you ever been punched or punched someone, Weston Peick-style?
Ha! I have never been hit and hopefully will not. That situation was kinda funny, though. He’s huge. That kind of situation can get get you fined. [Note: Weston Peick punched Vince Friese during a race earlier in 2016 in Anaheim, California which Jason Anderson won. Peick was disqualified, issued a suspension and fined $5000 fine by the AMA.] I think Peick got banned for two races. That kinda sucks. AMA will fine you $5000 or your purse money depending on what you do. There’s different deals but the next $5000 you make from purse money is theirs.

Speaking of a penalization, you got screwed by missing a mandatory joker lane [a portion of the track that can add five seconds to any given rider’s lap time] last October in Las Vegas. Were you pissed off?
Yes, I remember that well. There are some things I have screwed up in the rule book and that was one of them. That incident was at the Monster Energy Cup race. Later on, I won a race as Ryan Dungey lost two positions to me for not paying attention to a medical flag. That was at Ford Field in Detroit earlier in March. I don’t ever want to win that way but, of course, I will always take the win.

Zach Osborne’s mechanic told me last year a Husqvarna chassis is completely different from a KTM. Is that entirely true?
Yes. Obviously they are very similar, made in the same area and have the same owner. However, the bikes do have differences that my mechanic Chris Loredo would gladly explain. The price for a stock Husqvarna when compared to a KTM is very similar.

What about your own 450cc factory bike as opposed to the average Joe’s showroom model?
We have different things on our factory bikes like specialized titanium bolts and different foam on our seats to bring down the weight. From different forks to motors and suspension, a factory bike needs to be different and better. And we do weigh our bikes. I just tell my mechanic and crew if the bike feels good. I will say factory bikes have the same frame and brakes as well as some other things. [My mechanic] Chris knows a lot more than I do.

You changed to the larger 450cc class rather quickly. Why?
If you win a championship within your first three pro years, the AMA automatically makes you.

What other sponsors do you have aside from Rockstar and Husqvarna who pay the bulk of your yearly salary?
We probably have 20 of them right now. It’s really a team effort to get ‘em with my manager Kenny and others helping point the way as well.

Did you want to stay with KTM or was Husqvarna a better deal for exclusivity?
This deal was my first choice after leaving the 250cc class. I’d rather stay at Husky now that I have the deal signed. There is a great group here and the bikes are fast and comfortable. I’m staying put. 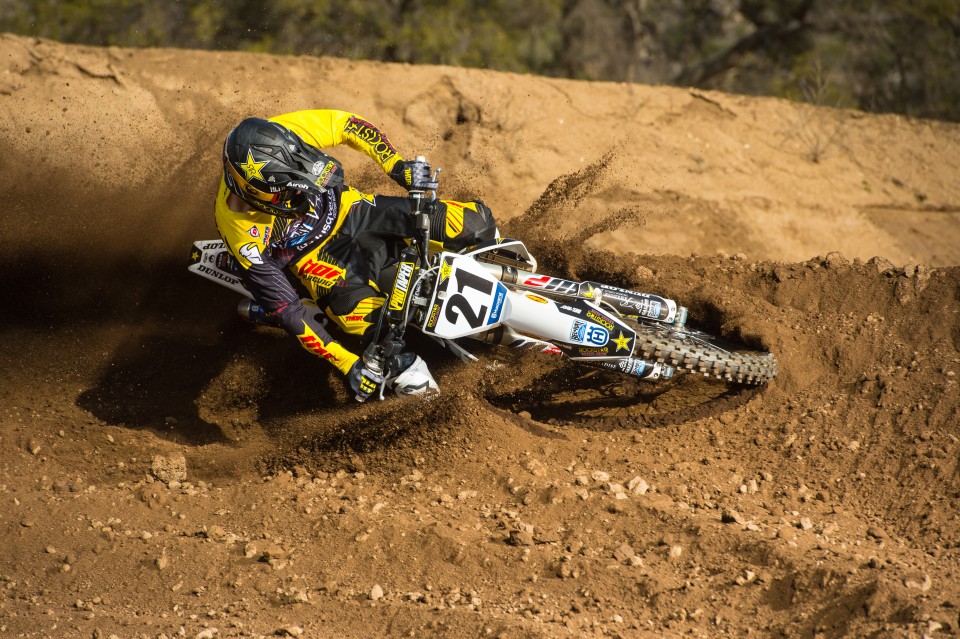 Training regimen?
It depends really on the time of the year. We ride bicycles four to five hours a week, use the rowing machine, do some recovery rides and more. Basically, we never stop training or working out. You have to if you want to land on the top three podium and race competitively. I train on my bike with Aldon Baker who also works with Marvin Musquin and Ryan Dungey. There is a private Husqvarna track in Florida and California.

You’re already a top three rider in the 450cc class for the 2016 Supercross season. Congrats. Did you expect that?
Actually, I did. I signed an extension on my Husqvarna deal that lasts until 2018. I planned on being a top three rider as I am paid to be top three. Confidence is very important in this sport. On that note, I’d like to race for as long as I can. It is hard to know when to quit, but I am young and it’s still fun to race dirt bikes.

See Jason Anderson and the top names in professional motocross May 21 at the 48th Annual Hangtown Motocross Classic at Prairie City State Park located at 13300 White Rock Road in Rancho Cordova. Class practices starts at 8:30 a.m. and races commence at 2 p.m. General admission tickets start at $45 and go up to $325 (plus service charges). For info and tickets go to Hangtownmx.com.