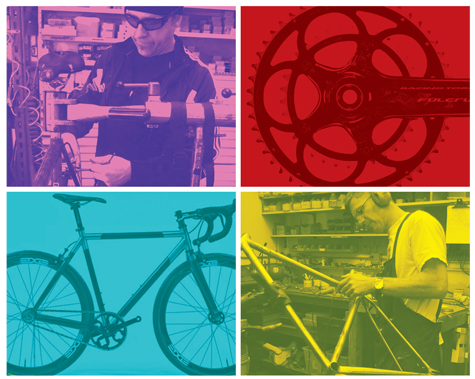 To anyone who has ever owned a bicycle, it’s a universal reality: all the pleasantries of a bike ride quashed by a bicycle chain mishap. Nowadays, however, there is such a thing as bicycles without chains. These bicycles are belt-driven; rather than being equipped with a chain, they are equipped with unbreakable, motorcycle-style belts.

Some of the industry’s most innovative bicycle designs are being generated not by manufacturers, but rather by handmade bicycle frame builders.

As with any niche, when you get into talking about the specifics of how a bike is made and the materials used, the discussion easily becomes esoteric. But regardless of whether or not you can keep up with the bike jargon, if you have even the slightest interest in bicycles, then the North American Handmade Bike Show (NAHBS) is a must-see, says Don Walker, longtime bike frame builder and the show’s founder and president. 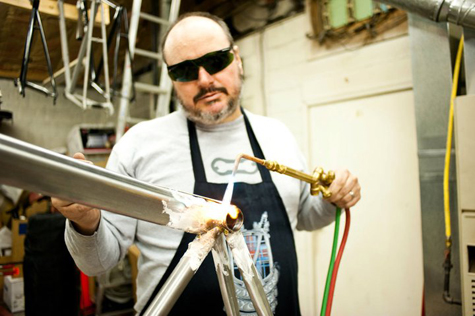 This is the one opportunity of the year where bike enthusiasts can see “eye-popping, over-the-top, beautiful, yet functional, bicycles,” Walker explains. “In my opinion, there are no better bikes on planet Earth in any one location other than the NAHBS show once a year.”

Nor is there a larger gathering of bike frame builders that occurs anywhere else in the world than the gathering at NAHBS, he adds.

The three-day show, now in its eighth year, will come to Sacramento. This year, 158 exhibitors will be featured at the show, the highest number of exhibitors at any NAHBS show, with the exception of last year in Austin, Texas. (There were 174 then.)

Builders will compete for “best of” categories based on the type of material used, the style of the bike and frame, the finish and overall best builds. Handmade bike frame builders coming from as far as Italy, France, Japan, England, Denmark and Canada, and as close as Texas, Oregon and San Francisco, will spend three days at the Sacramento Convention Center showing off their best work. 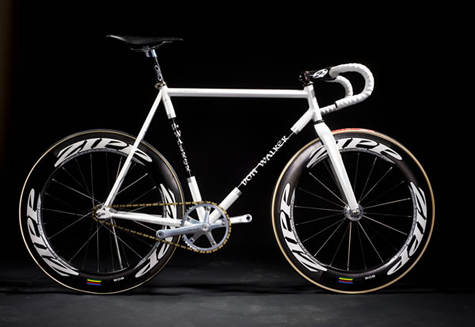 The concept of a handmade bike frame is not unlike that of handmade clothing, local bike enthusiast Rick Houston says, in the sense that it is a high-caliber item tailored and customized to fit an individual.

Houston, co-founder of Sacramento Tweed, a mass gathering of cyclists who don vintage and tweed during big bike rides around town, is also primarily responsible for bringing NAHBS to Sacramento this year.

After reading his fill about the show in bike magazines, Houston made a spontaneous phone call to Walker in January 2010 asking him to bring the show here. Though he had been absent for some time, Walker just so happens to be a Sacramento native who grew up in the Arden-Arcade area and used to cycle race in Sacramento in the early ‘80s.

The next time Walker was in town, Houston met with him over burgers and beer at Rubicon and pitched a list of reasons why the show should come to Sacramento: the city boasts a mild climate, flat topography, and a solid infrastructure, he explains. Not to mention that the headquarters of the California Bicycle Coalition is based here, and the U.S. Bicycling Hall of Fame in Davis. 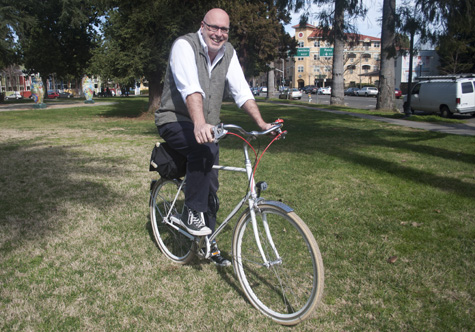 “Sacramento is a great bicycling city,” he says. “We have advantages that Portland can’t dream of.”

This year’s show has certainly evolved from its beginnings eight years ago, Walker says. The show grew out of an online handmade bike crafters forum, he explains, and was first held in 2005 in Houston, Texas. In addition to featuring work by some of the world’s top handmade bicycle frame builders, it was meant to provide an opportunity for beginning builders to network with the pros.

That show featured 23 exhibitors. Walker realized he was on to something when 600 to 700 attendees came through the doors over the course of three days. 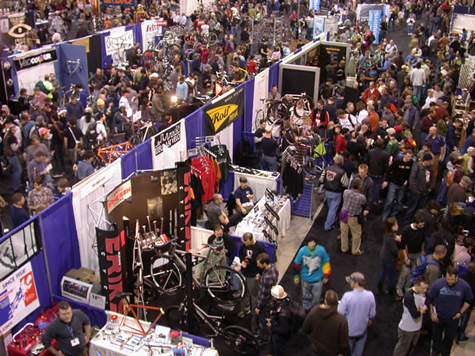 “My mission in life at that point in time became: make sure that every cyclist on Earth knows that if they’re interested, that they can buy a handmade bicycle, usually for less than they can than a brand production model if it’s made in China,” he says.

Awareness of the show is increasing exponentially. At the San Jose, Calif., show in 2006, there were four times as many exhibitors. NAHBS has become an internationally acclaimed event for the cycling industry, and it is now maxed out in capacity.

This is the one show that bike builders can look forward to, Walker says, because they can show their best work, and the whole world will see it, either through the media or viral online buzz.

“[Bike builders] understand that NAHBS is the best bang for their marketing dollar,” he adds. “It’s those guys and gals that really dig your stuff that will take a picture and post it somewhere.”

Walker, who himself has built close to 500 bikes since the start of his building career in 1991, will bring his handcrafted steel bikes from his two-garage operation back in Kentucky to the show. 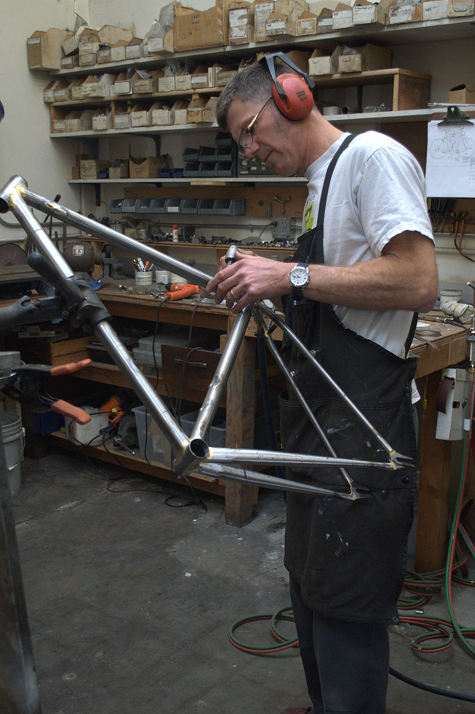 On the local front, Sacramento’s Steve Rex will have an exhibition featuring a variety of his work. Being the only handmade bike frame builder in Sacramento, he stays pretty busy building bikes for recreational and sport riders within the Northern California region alone. As busy as he is, he is still participating in this year’s show.

“I love Sacramento, and I think [NAHBS] will reflect well on the city,” he says. “There will certainly be buzz about it for a couple of years.”

Coincidentally, the show overlaps the 25th anniversary of his building career. A tribute event is planned in which all the fundraising proceeds will go to Sacramento Area Bicycle Advocates (SABA). 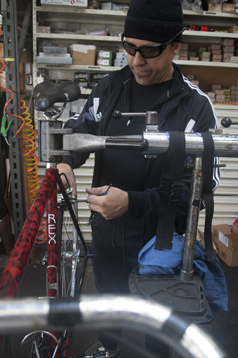 The day Submerge paid Rex a visit, he had been working on building two bikes: a single-speed cyclo-cross bicycle and a road bike, both fillet-brazed. If fillet-brazing is lost on you, just picture this: it is when two tubes are fused together without being melted, instead only the joining or filling material melts, Rex explains. It is a less-commonly used technique that requires more time and patience in comparison to the Tungsten Inert Gas (TIG) welding method, he says.

Once a cycle racer, now Rex’s days are spent building bikes from steel and carbon fiber, whether they are mountain bikes, tandems, road bikes or cyclo-cross bikes. He specializes in building fillet-brazed bikes with carbon tubes and steel joints. The carbon tubes are glued into the steel lugs, or joints, he explains.

The carbon fiber he uses is sourced from and custom-made in Utah, and the steel is from a plant in Missouri. A Rex bike can take anywhere from eight to 20 hours to make; and, considering he is the only one in the shop who actually makes the bikes, it’s understandable that delivery time ranges from three to five months.

Whether from near or afar, the common denominator between NAHBS exhibitors is the high quality of craftsmanship they bring to the show. 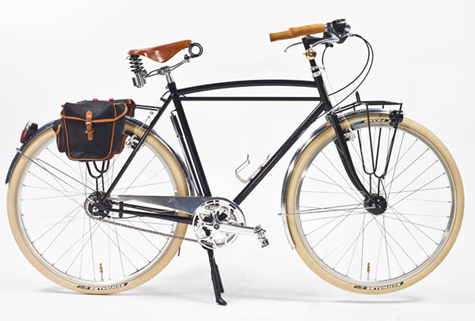 “Everybody is bringing their A game [to the show] every year all the time,” Walker says. The show always has been, and will continue to be, about bike fanatics, he adds.

“We’ve got all walks of life that come in [to the show],” he says, “from new cyclists to veteran cyclists, people who have been riding for 40 years or more.”

Based on past years, NAHBS expects 30 to 40 percent of attendees to come from outside of the state, 15 percent of whom will be repeat visitors. Of the 158 exhibitors, Walker estimates that 15 to 20 will be international, while the rest will be from within the country.

Needless to say, there are countless hands involved in setting the 2012 NAHBS show into motion, Houston says. He himself has been working with about 200 volunteers.

“The volunteer spontaneity overwhelms me,” he says. “I don’t know what kind of city we are, but we are an amazing village.” 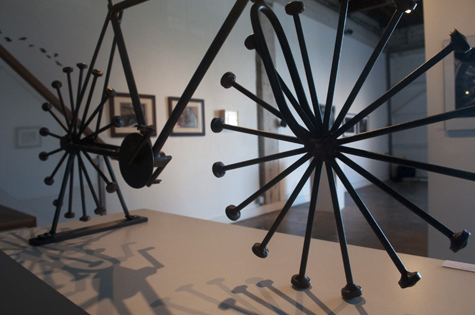 Apropos to Houston’s statement: To show how enthused locals are about the bike show and about bikes in general, within about a month, Sacramento volunteers have organized ArtBike! in conjunction with NAHBS.

In short, it is an art project displayed around the city that pays homage to bikes. Photos, sculptures, paintings and mixed media depicting the two-wheeled machine are featured at Cuffs, The Golden Bear, Milk Art Gallery, First Edition and the Ancil Hoffman Golf Course.

The objective is to express just how much of a creative and bike-friendly city Sacramento is, says ArtBike! organizer Julia Beckner.

The project will culminate on March 3, 2012 with what Beckner describes as a Burning Man-esque bike parade starting at the Convention Center.

Expect the absurd, Beckner warns, including a 5-by-5-foot hollowed toaster that will be maneuvered by cyclists.
“It will blow people’s minds,” she says.

Expectations aside, Houston forecasts that, considering 20 to 30 percent of the Midtown and downtown crowd spends time on a bike at any given time of the week, either commuting or leisure-riding, NAHBS should have a huge turnout.

Regardless of what cyclist tribe you identify with, whether it’s the fixie riders, the road racers, or the mountain bikers, there’s something for everyone at the show, he says.

Naturally, he has invited anyone and everyone, including Congresswoman Doris Matsui. We’ll see who shows up. 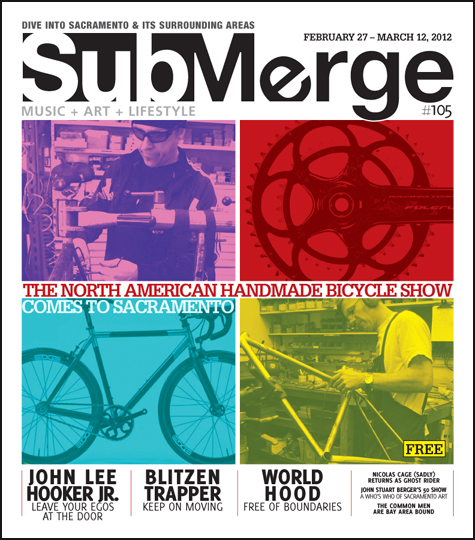 The North American Handmade Bicycle Show will occupy the Sacramento Convention Center March 2 through March 4. Three-day passes cost just $50, and single-day passes are also available. For more information on this event and ArtBike!, go to 2012.handmadebicycleshow.com.