Nisha Grayson documents the search for her birth mother in her film, You Follow: A Search for One’s Past

Scenario: Imagine you’re strolling down a main street in Southern California—let’s say Overland Avenue in Culver City—and in the near distance you see a family of four walking in your direction, swinging their arms hand-in-hand. You smile at this sweet scene of a happy family embracing each other so openly, but as they get closer their image becomes clearer, and all of a sudden you’re doing a double take.

You notice each person’s skin tone is of a remarkably different shade of color. It’s as if you were scanning a palette of makeup foundation at a MAC kiosk in the mall. And you bluntly ask yourself: “How did that happen?”

It’s actually a question my cousin and her husband get asked all the time, but maybe not in those words exactly. People politely wonder if Josh and Siena are their kids, to which they smile and enthusiastically reply, “Of course! Can’t you see the resemblance?”

Josh and Siena were adopted at birth as transracial adoptees. Josh is half Puerto Rican and half white, and Siena is African-American. Their father, Troy, is white, and their mother/my cousin, Deanna, is half Mexican and half Colombian. It’s no secret Josh and Siena are adopted. They’ve been raised to be aware of the situation and seem to understand it to the extent that any 5- or 8-year-old would be expected to.

Yet, even with their basic grasp on the circumstances, describing their birth parents has always been tricky.

In the case of Josh, my cousin was fortunate enough to stay in touch with his birth mother and has even introduced them in person before. They say the two are not particularly close, but that if he ever wants to pursue a connection as he gets older, she’ll only be a phone call away.

Siena, on the other hand, will have to search for her birth parents like countless other adoptees before her. They left no contact information and didn’t appear interested in keeping tabs on their daughter.

Siena sounds intrigued whenever they’re brought up, though, asking what they look like and where they live. I’m betting she’ll go out and try to find them one day, too—she’s already stubborn as it is when she sets her mind to something.

Still, Siena is only 5 years old, and her thoughts on the next Disney princess dress she plans to wear almost certainly supersede any desire for such a search at the moment. She’s just not at that point in her life yet, but her time will come.

Now, fast-forward 26 years and drift away from movie studio central and up the California coast to Sacramento, where we meet 31-year-old Nisha Grayson at a Peet’s Coffee shop in the heart of Midtown.

Like Siena, Grayson is also a transracial adoptee who looks nothing like her adopted family and never knew her birth parents. Unlike Siena, however, she was born across international waters, which automatically sent her dreams of ever finding a bloodline spiraling into damn-near impossible territory.

Here’s the fascinating part: She went abroad and looked for them anyway, and she filmed the whole thing in a cutting-edge documentary called You Follow: A Search for One’s Past.

“It’s always been a burning desire for me,” Grayson says. “But I’ve always kind of talked myself out of it because of what people have told me. I kind of adopted their narrative, and so I just never thought it was possible.”

Back in 2009, Grayson tossed that narrative out the window.

As she relentlessly paced the unfamiliar streets of Goa, India in search of her birth mother, Grayson found herself hungry for the truth. She had arrived at that point in her life where she needed to know, and she had come too far then to give up.

But before we get ahead of ourselves, let’s go back to the beginning. 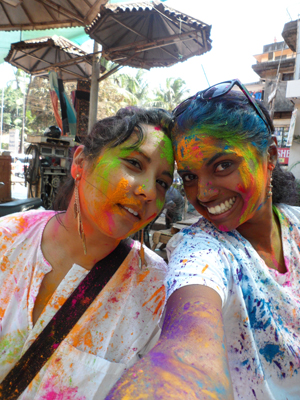 In the early part of 2009, Grayson and a group of four friends started to plan a trip to India together, where they intended on sightseeing and exploring as much of the country as they could. Three of her friends—who are also of Indian descent—had been there before, so Grayson was thrilled to finally have a chance to visit her homeland with them and discover her roots in the process.

Her friends took it one step further, though. They suggested that Grayson seek out her birth mother—the only one listed on her adoption papers—while she was there and document the journey on camera. So that’s exactly what she did, and what began as a mere vacation quickly snowballed into a quest for family and identity in a country with more than a billion people to sift through.

Through six months of promoting and fundraising up and down California, word quickly spread among the local adoption community about Grayson’s cause. Momentum for the project gradually picked up as they went along, as did Grayson’s passion.

“Once we started telling people about it and kind of advertising it and saying, ‘Hey, this is what we’re going to do,’ that’s when I got really serious,” Grayson says.

Eventually, the You Follow… crew raised the necessary funds for their eight-week adventure, which altogether came out to roughly $20,000, according to Grayson. The first two weeks of the trip were dedicated to traveling through Northern India and was paid out of their own pockets, leaving the last six weeks and all of the fundraising money devoted to finding Grayson’s birth mother and producing the film. 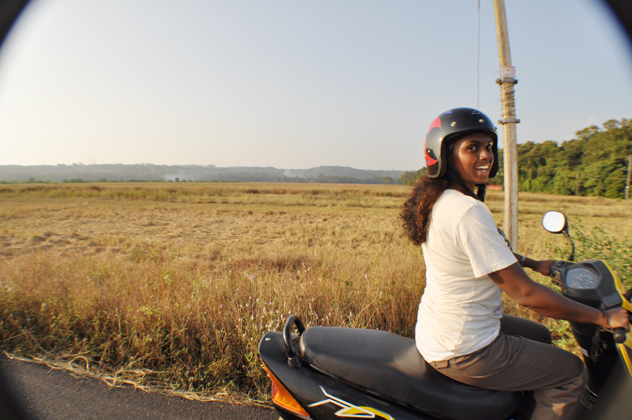 Grayson and her friends boarded their flight to India in September 2009. Her birth mother was a world apart and without a trace, but she truly believed she could find her.

In those last six weeks—and ultimately over the course of two years—Grayson and her friends scouted her birthplace of Goa far and wide in search of this woman.

Going off of the original adoption records and starting at the hospital in which she was born, Grayson and her crew followed the rest of the clues as they presented themselves, which oftentimes led them to dead ends.

While Grayson’s efforts were usually met with genuine interest from the locals, she says she couldn’t take full advantage of their potential insight because of the taboo surrounding adoption in Indian culture and the possible repercussions her search could have had on her birth mother.

It wasn’t until Grayson was in her last couple weeks and at a complete dead-end that she finally opened up to a local food truck vendor down the hill from her apartment in Goa. His name was Tony, and he turned out to be a godsend for Grayson—the one missing piece she needed to bring her mission full circle.

“Yes, my search angel,” Grayson says, laughing. “I was about to leave anyway, we had nothing at that point. So I just told him. And he was like, ‘Oh, well I can help you.’”

And what a help he turned out to be. Tony, being a local in Goa and familiar with the language and town gossip, hit the ground running in this reignited campaign.

Unfortunately, Grayson had to return to the States before any significant progress could be made. But she was astounded to hear from Tony a year later, telling her to come back after he had found something worth her while. So back to India she went, and the search continued.

She says in the long run, her trip to India was about way more than just finding this one individual.

Grayson and her friends are hosting a screening of You Follow: A Search for One’s Past here at Sacramento’s 24th Street Theater on Aug. 22, 2014 at 7:30 p.m. Tickets are only $7 and are on sale now at Eventbrite.com (just search “You Follow”). Swing by and check it out, it’s one film you’re not going to want to miss this summer.