To become a full-fledged member of Sacramento’s legendary Flexible Flav B-Boy Crew, you must learn the ropes from the crew’s elders at the Legendary Steps practices.

The Sol Collective on a Tuesday night threw me off at first–just a couple art folks, sitting around talking in the gallery, none of whom know a B-boy named “Ernesto” but directed me to the B-boys in the back space. I followed the sounds of break beats akin to B-boy acrobatics in the back, to find a few young kids stretching and warming up. Ernesto was not there, but I met Abraham Dunham, aka B-Boy Buckingham, the originator of Flexible Flav.

Dunham has been break dancing since 1997. He and a fellow B-boy called J-Rawk got the idea to start a crew in 1999 when they caught word of a competition. None of the B-boys tell the story without candor; the two simply formed a team, called it Flexible Flav for no particular reason, showed up to the jam and won it. But in the simplicity of the Flexible Flav legend lies a glaring truth: these are B-boys who show up to win. Dunham described the crew’s inception in a matter-of-fact manner, as though the past decade of glory was bound to happen. “Nothing better to do,” he said. “I try my best to be good at it. If you’re black, it’s either rap or dance. I picked the latter.”

After winning Freestyle Session 11 in 2009, Flex Flav considered themselves made men in the international B-boy scene. Some of the crew’s legendary battles are cataloged on the Internet. In my research, I quickly got lost in the plexus of battle footage on YouTube of Flex Flav dismantling its competition with solo and choreographed group stunts that showed innovation beyond the average B-boy’s imagination, which is why Flex Flav made winning its only option.

Before Dunham and Larry “B-boy Fatso” Oliver, a former Legendary Steps trainee, began their training, I spoke with Oliver about how the crew did at the jams it attended in Portland, Ore., and Seattle. Future and a visiting B-boy from Italy named Eddy took first place in Portland, but the best the crew did in Seattle was second. “We don’t take too kindly to second,” Oliver said.

Oliver regrettably missed the Portland jam, but for good reason: he got engaged to his girlfriend. Oliver, a member since 2004 (he joined fresh out of high school), is taking the steps to become a core member. “I was at every single competition, every practice and made a name for myself,” he said. “I was just a young 18-year-old kid that was really hungry, and they built me from the ground up. Now I’m with the big dogs.”

Dunham and Oliver are the elder teachers in the backspace of Sol Collective, instructing seven B-boys of varying degrees of skill. I watched from a wooden staircase as Oliver mixed in with the Legendary Steps kids, taking his turn to demonstrate the proper arm/foot placement so their feet don’t drag on a windmill. There are two Italian B-boys practicing with the Legendary Steps crew. They are B-boy Rufy (Mattia Giannattasio) and B-boy Eddy (Edoardo Napoleone), who won in Portland. The Italians have traveled to Sacramento to study under Dunham. “They wanted to come to the United States to learn more about B-boying and train to get better,” Dunham said. “They train really hard and won some jams, so I’m proud of them.”

Oliver added, “Just based off rep, people wanted to be down with us. If you see Michael Jordan playing basketball, you’re going to want to come up to him and ask, ‘What can I do to be as good as you?’ That’s how it starts.” 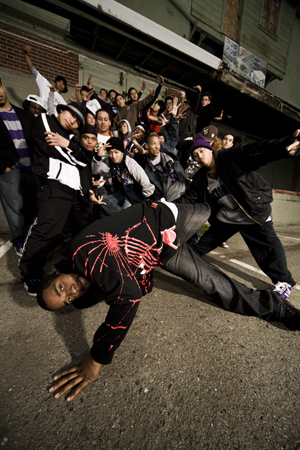 Currently, the core members of the crew are Dunham, Future and Oliver. I asked Oliver who he considered past legends to be, to which he named five former B-boys who’ve since joined other crews. B-boy Machine is now in Killafornia Crew. B-boy Ajax is in Rock Force Crew. Oliver called B-boy Foots a Sacramento legend, but said he is “doing his own thing,” whatever that entails. B-boy Morris left for personal reasons, as did B-boy Swells, who’s been friends with Oliver since they were 13. Answering questions via e-mail, Ernesto Abueg included B-boy Marx (Marcus Ramos) to the Hall-of-Fame list. Ramos is Dunham’s close friend who helped build and shape the crew in the early years. “People come and go,” Oliver said. “As long as you have three to four people that are always going to be there, people to look up to, the young guys will know who the real crew members are.”

Even though Flex Flav emerged victorious from its most recent jam, Oliver said the crew’s focus is on cultivating the skills of its Legendary Steps generation. They practiced for over an hour, as sweaty T-shirts began to cling to the breakers and dark stains formed on their backsides from spinning on the dusty gray concrete. One of the breakers, a pudgy young kid, was getting tips from Dunham to use his deceptive agility and humor to his advantage. He was encouraged to play up that he might not be able to pull off a handstand freeze by making his arms wobble. The B-boy name “Yogi Bear” was thrown out and stuck as his new persona.

Dunham looked comfortable in his teaching position, moving around the room to put wise suggestions in the pupils’ ears to play to their strengths while encouraging them to expand their repertoire with crafty moves he’s not seen done before, or at least in a while. “I have more fun teaching than actually battling,” he said (his last battle was in 2008). “I like to help people get better, just hang out, make jokes and teach. You don’t get booed for teaching. I don’t want to be that guy who’s old and still breaking and battling. I enjoy breaking, but I’d rather pass my knowledge down to the younger guys.”

On the opposite side of the room, Oliver taught a pupil how to space his arms in order to pull off difficult freeze maneuvers that require abdominal strength. Prior to this session, the student was in the corner, pumping through crunches. “At this point we’re more about building our younger generation,” Oliver said. “We want to build them so they can become Flexible Flav as well. We’re in training mode. We’re keeping it low for a while, and then we’ll punch you in the face out of nowhere–win another big jam. It’s military tactics. You have to pick the right spot and hit ‘em really hard.”

The crew is keeping quiet competitively, but on Saturday, Dec. 11, it’s planning a major battle called Sac Hop with a prize that piqued the interest of crews as close as the Bay Area, Los Angeles, Utah and Seattle and as far away as Italy. Slated for Mills Middle School in Rancho Cordova, Sac Hop will feature a one-on-one battle for a $250 cash prize and a three-on-three crew battle for a chance to be flown to Montreal to compete at the Just for Laughs Festival. “We’re blowing everyone out of the water with this one,” Oliver said. “It’s the first time ever in Northern California that someone is throwing a dance event that will fly the winner out of the United States.” 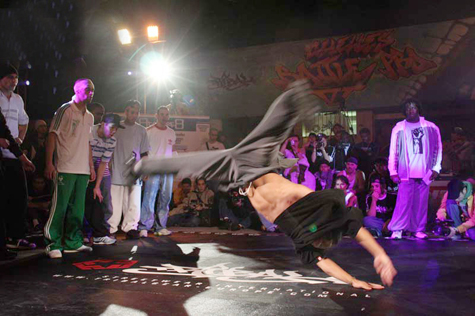 Given its name, the Just for Laughs Festival might not seem like the ideal destination for a champion B-boy crew, but Oliver assured me, it was a tremendous opportunity. “A lot of people don’t know what it is because it’s in Canada,” he said. “It’s big, though. They block off the whole town. It’s crazy. It’s a week-long festival, it’s Cirque de Soleil stuff, it’s comedians, it’s dancing, it’s all kinds of arts. Anybody that knows what’s up in the entertainment industry knows about the Just for Laughs festival.

The first 32 crews to enter Sac Hop will be eligible to compete for the tickets to Canada. Oliver said he’s already expecting Moon Patrol, Fraggle Rock Crew, Misguided Steps, Angels of Death crew, Living Dead Army and Boogie Brats. “I know this sounds like a bunch of crazy random names,” he said. “These people are legit in the scene.”

To prevent concerns of Flex Flav bias, none of the crew will compete in Sac Hop. Oliver was quick to dispel the slightest suggestion by reading off the list of judges that ranged from crews in Atlanta, Utah and Fresno, Calif. “The closest crew is Fresno,” he said. “We’re keeping it 100 percent legit. There’s no excuse for anyone not to come, since there’s no way it’s rigged to benefit us.”