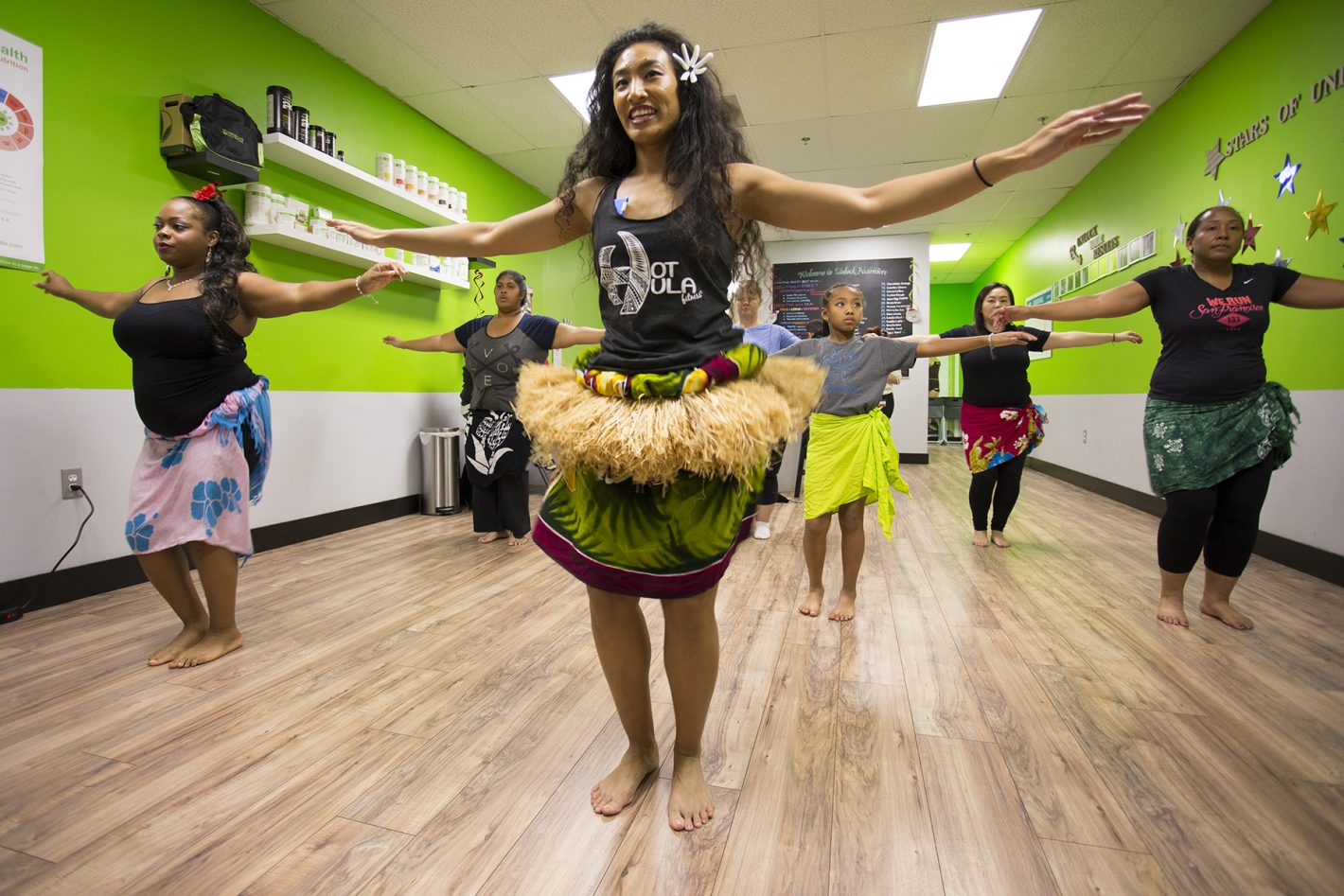 Ohana Fiit, a new dance class company teaching out of two locations in Sacramento and Elk Grove, has your resolutions covered, whether your goal is to lose weight, tone up, learn something new, have fun, make new friends or engage your kids in more activity. Started just this year by Jennifer “Mahina” Leslie and her husband Ron, their Friday classes at Sierra 2 Center and Thursday classes at Unlock Nutrition are already heating up. They’re hoping to bring their Hot Hula Fitness classes to other areas of Sacramento, and their eventual goal is to have their own studio.

When I attended two classes with my gal pal, the music was Lil Mama’s “Shawty Get Loose,” which seemed an unconventional choice for a hula class. It made the hip shaking movements of hula feel a bit more like booty shaking, and I couldn’t help but smile that hula smile while I danced.

“As a certified Hot Hula Fitness instructor, they do give us some songs to go with the dances, and they’re all instrumentals,” Mahina says of her music selection for class. “I use those for the first week, and then, to change it up a little, I look for something with the same tempo. Something not too fast, not too slow, but if you’re advanced, you can speed up your hips double time while the steps stay the same. When the hip movements increase, you burn even more calories!”

Both classes follow the same routine. So if you can’t make it on a Thursday or a Friday, or you want to come an extra day, the classes are structured so that both classes work on the same dance. “In the beginning of the month, you learn a couple of eight counts, then you learn a couple more each week,” Mahina says. “By the end of the month, you learn the whole dance! I may change the songs between classes, but the choreography stays the same.”

Mahina endeavors to make hula accessible to all ages and all skill levels. When she shows the more advanced students a more challenging version of what she’s teaching the class, her mastery of the dance hypnotizes. Watching Mahina snap into double time hip movements and sink closer to the earth with strong legs, offset by lovely, graceful hand gestures and a welcoming smile, makes anyone wish they could dance like that on some beach. And with a great teacher like Mahina and practice, learning to dance hula is totally within reach.

Most people who opt to take the class don’t gravitate toward hula, specifically. It’s more about the fitness payoff. It is estimated that someone who is at a beginner or intermediate level burns 200 to 600 calories an hour, depending on the intensity of their effort. An advanced student might shed 900 calories in a one-hour class. Additionally, you work your obliques, abs, back, hips, legs and arms, engaging all your muscle groups in the movements.

In partnership with Kendrick and Charil Daniels at Unlock Nutrition, Ohana Fiit cross pollinates their customers by offering a free Herbalife smoothie after class.

“Because it isn’t a full studio like Sierra 2, we offer a shake after class,” Mahina adds. “We also understand that class is at 7 p.m., which is most people’s dinner time. So, you dance your little butt off and get the shake after.”

At only $10 a class, that’s a pretty awesome deal and an affordable way to realize weight-loss related resolutions, if I do say so myself. 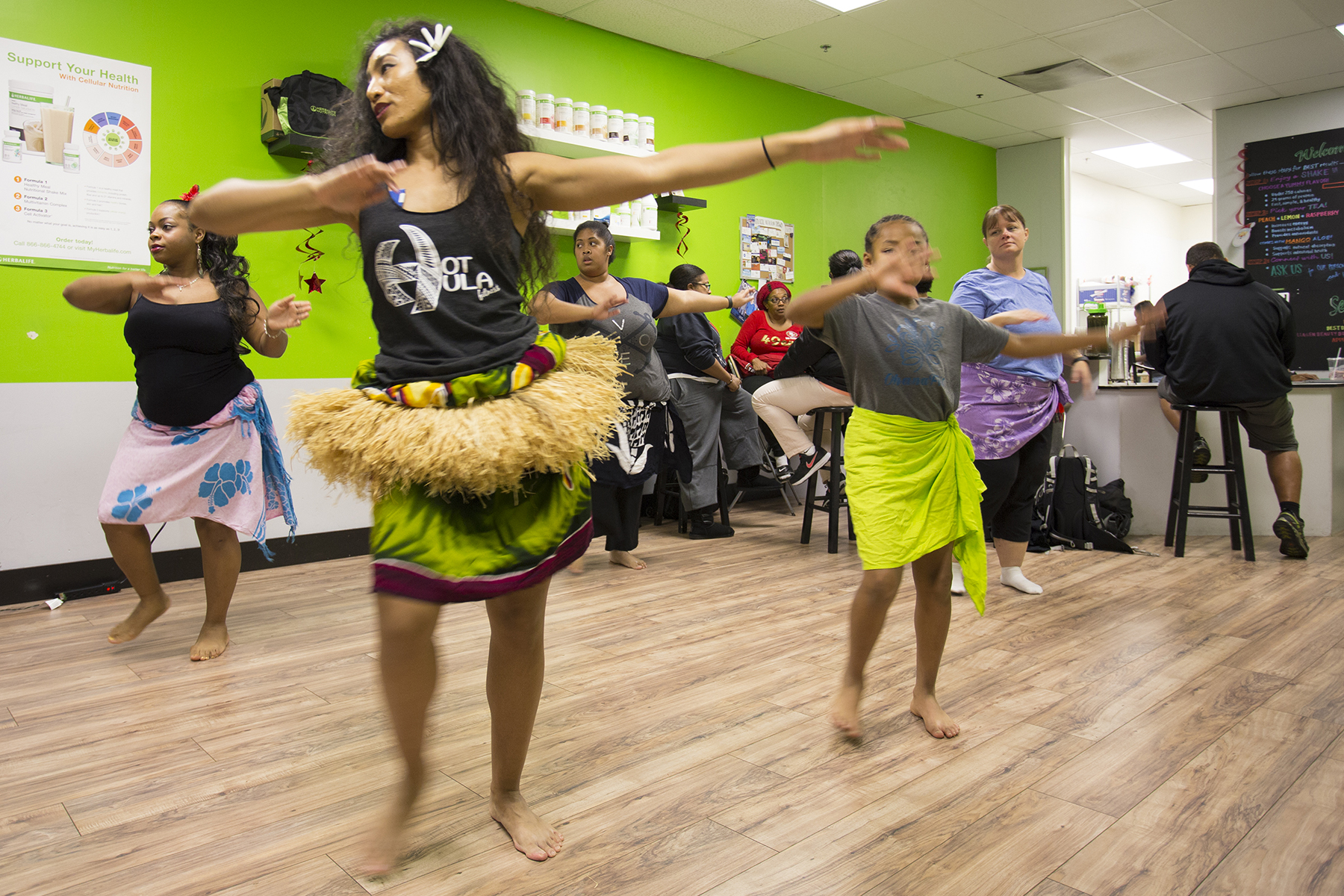 Lightning struck Mahina when two worlds she loves collided. “I started hula dancing when my family lived back in Hawaii, and I was really little,” she says. “I had to stop hula dancing because my parents moved to California. It was when I was around 15 that my mom found a halau here in Sacramento, and joined. And I found out that I really like fitness later on in life, too, so I found a platform for that. When I realized I could combine hula and fitness, I thought, ‘This is amazing!’ Honestly, my favorite style is Tahitian dancing, and the great thing about this is you can take it fast, which is more of a representation of Tahitian dancing, or you can take it slow, but the movements are still the same. So I was like, ‘Let me certify!’ but it was really hard to find a job as a group instructor. So we decided to just make our own class.”

By “we,” Mahina is referring to her and her husband, Ron. The couple are both busy promoting, growing their clientele, filming classes, designing T-shirts and more, on top of day jobs. In spite of their demanding lifestyles, you can see they’re truly in love and on a path together, with purpose.

“We met at a gym. She was looking at me and doing pull-ups. That’s my story. Her story is a little different,” Ron jokes and Mahina giggles. “We saw a lot of families not doing fitness together. Parents might go to the gym, the kids might do football or whatever, but they don’t do anything together. We do a lot of things with our kids, and that’s how we came up with the Ohana fitness concept.”

Mahina continues, “My husband and I are truly passionate about fitness, and we didn’t want there to be an issue for moms, dads, uncles, aunties to have that barrier, to be able to enjoy fitness, especially on a weekly basis, so we’ve really embraced our name Ohana Fiit, and we allow the kids to come in. It doesn’t matter as long as they’re at least 2 or 3, you’re keeping an eye on your child, they don’t disturb class in our studio. They are more than welcome to come and play with other kiddos and run around. We have a couple videos in class where we’re all dancing, and this little baby just runs across the screen. The kids haven’t been too crazy, so we just embrace it. Bring your little one in, come in and dance, sweat, and have a good time with us!”

When asked if she wanted to share anything about Hawaiian culture beyond the dance steps, she says, “Other than embracing the culture, it’s about embracing family. That’s truly a part of the culture. Being welcoming, and offering what you have to offer, even if it’s just a good time, or a shoulder to lean on, or someone to talk to after class.” 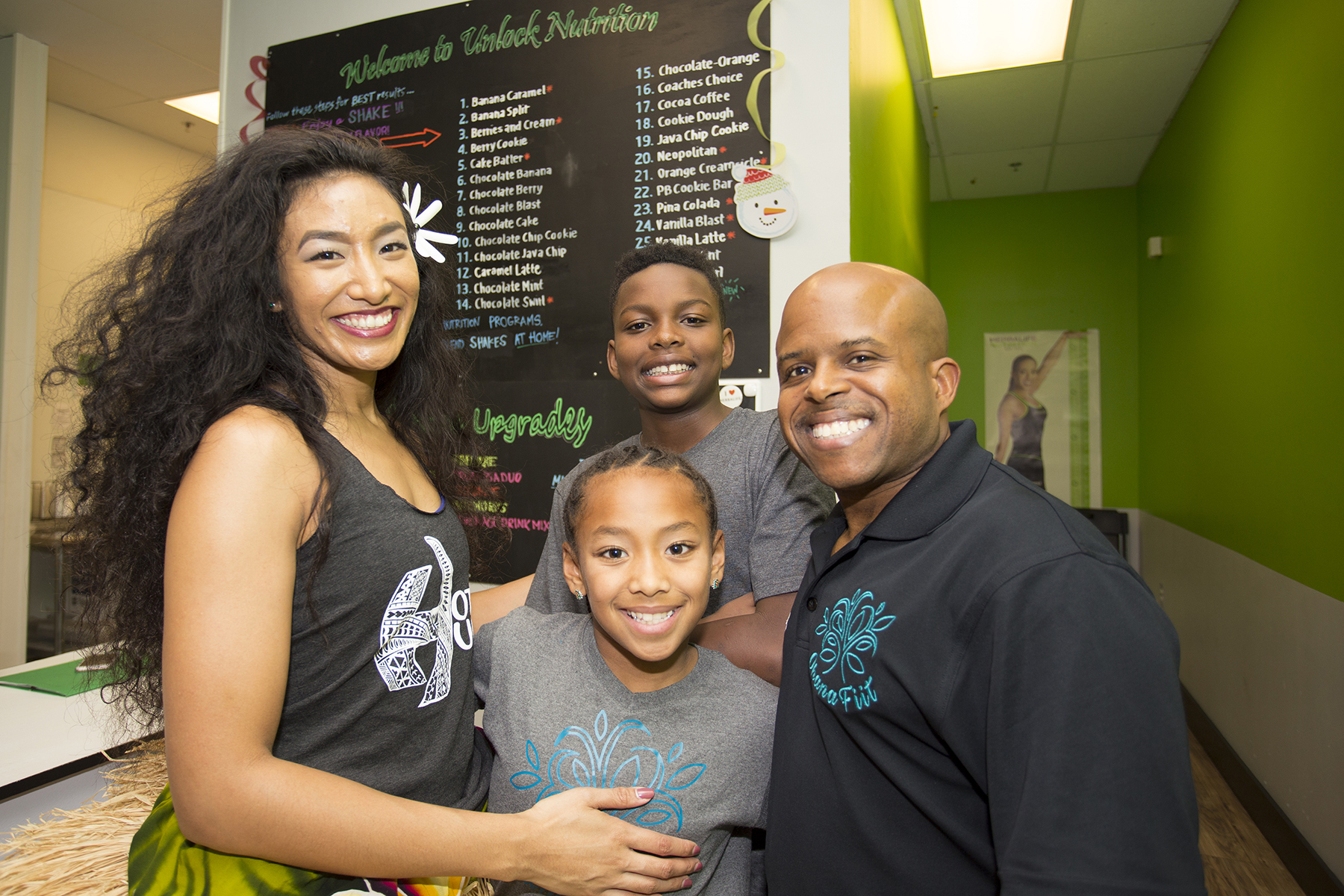 Ohana Fiit is a family affair. Of her family’s involvement in the business, Mahina says, “My daughter, Alisa, takes the Hot Hula FItness classes with us, and she learns the dances. I don’t teach them to her ahead of time, so she learns them at the same pace as the rest of the class. And Devyn, who is also an instructor here, teaches Pound Fitness. And Ron takes classes when he can.”

“I started because I wanted to have respect for what she did,” Ron adds. “I’m a gym guy. But I decided to go ahead and try it out because we also want to promote this platform for men. And with her teaching style it’s fun and easy to learn.”

I asked Mahina how she got her Hawaiian name. “Mahina Malamalama. That is my full, given Hawaiian name,” Mahina says. “My kumu at the halau took the definition of my birth name, and combined it with what she thought I brought to the group. My birth name, Jennifer, references nice, smooth skin. My kumu felt like I brought energy and lightness to the group because I’m always kidding around. In hula culture, there is a goddess, Hina, who is known for having nice skin. So altogether, Mahina Malamalama means the brightening of the moon. Like when you look at a full moon and there’s a ring of light around it.”

Let’s dance around the moonglow.