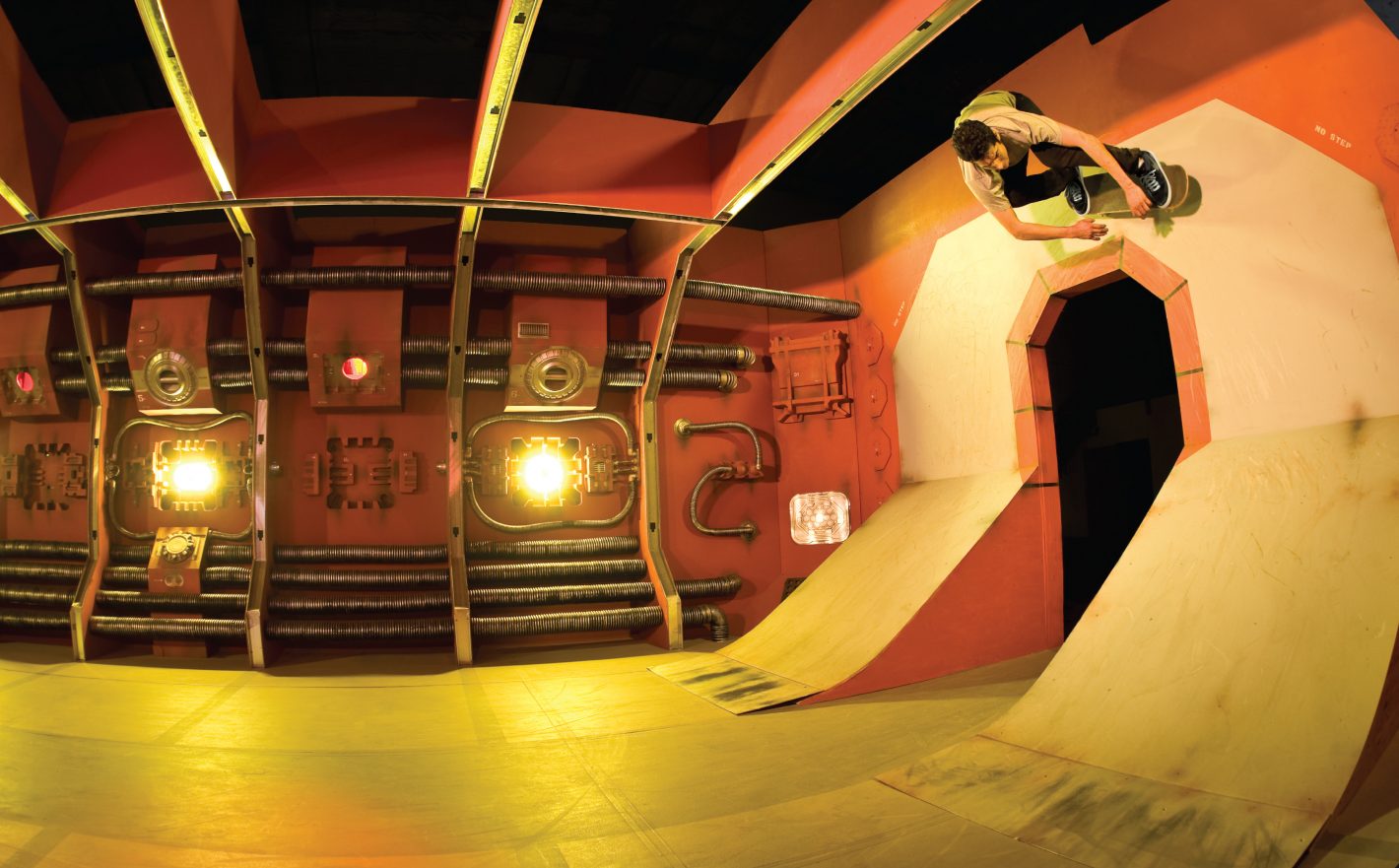 Put professional skateboarder Omar Salazar on the phone for an interview, even while he’s in Australia on a Nike Skateboarding team trip, and you’ve got one of the nicest dudes you’ll ever meet; caring, witty and all around fun to talk to. Put Salazar on a skateboard, assuredly where he’d rather be than on the phone, and you’ve got a savage on wheels; a straight-up wild man that charges at his tricks with relentless speed, dedication and concentration. The 26-year-old skater from Sacramento has made quite a name for himself in the industry, especially within the last couple years with his part in Alien Workshop’s video Mind Field, making the March 2009 cover of Thrasher and the announcement from Nike that Salazar will have his own signature shoe. But all the success hasn’t come easily.

Salazar was raised by loving and supportive parents who fled to the States from their home country of Chile. Pursuing a career in skateboarding, though, was not exactly what they had in mind for their son in this so-called land of opportunity. “They were always like, ‘Hey look, you’re lucky you have opportunities here, you need to go to school and you need to work for a big company,” said Salazar of his parents outlook on his skating. I was always like, ËœYeah, but I don’t want to do that; I’m not good at that. This is what I want to do.”

Salazar remembers having to hide his skateboards and boxes of products that companies were sending him so his parents didn’t get suspicious. “I didn’t want to disappoint nobody, but I was never good in school,” he admitted. “I mean, I finished high school, but I was never good as far as book smarts goes, I’m better at street smarts.” Those early years also consisted of a lot of couch surfing, riling up change from said couches to hit up Del Taco, raiding Safeway’s sample tables and bombarding open house food platters. “Yeah, I’ve come a long way,” Salazar said with a laugh, looking back.

A long way is an understatement, as this month Nike will release Salazar’s first signature shoe, a career milestone for any athlete involved in any sport. Salazar will be the second Sacramento-area skater to get his own Nike shoe, as teammate and close friend Stefan Janoski did so just last year.

“In the beginning,” Salazar remembered, “Before Nike gave anyone shoes, Stefan and I, we’d had offers before in the past from other shoe companies, but I always stick with what I believe in. I believe I’m a loyal rider. That’s just the most important thing. So, I figured if I kept loyal with Nike and the people I work with, then something good was going to happen.”

Even after Nike told them years ago that Paul Rodriguez would be the only team skater to get his own signature shoe, Salazar stuck it out, all the while telling Janoski, “We’re going to get shoes, trust me.” Eventually they both got the phone call and for Salazar, it was sort of an ‘I told you so’ moment when they did.

“I don’t want to sound clichÃƒÂ© or lame, but in a way I kind of manifested it because I knew it was going to happen,” said Salazar, not in a cocky manner, but a confident one. “Even before they offered me a shoe, I drew up a design and straight up put one in my room, one in my bathroom and one in my closet.” Salazar would be gone for months on skating trips and he’d come home having forgotten about his dream shoe designs, which re-invigorated him to skate harder, to keep going so that one day it would be a reality. “Like a year later after working hard and having fun skating and stuff, they hit me up and were like, ‘Hey, we want to give you a shoe after Stefan.'”

When it came time to actually visit Nike HQ in Portland, Ore., to meet the people who would be designing his shoe, Salazar was well prepared with his sketches, his favorite color schemes and other things that represented him and his personal style. “When I first started working on the shoes, they were like, ‘Shoot us your favorite colors, your favorite objects, your favorite things around the house, bring us photos of them.’ I didn’t know what the hell they were talking about,” said Salazar. Nike was essentially asking for pieces of Omar so that his shoe “could tell a story.” Turns out, Nike doesn’t just give signature shoes to anyone and when they do, they always have little stamps of the athlete’s personality and style on them. Take for instance Michael Jordan’s famous Air Jordan logo, jersey number, etc. found on his shoes. Salazar wanted a classic-looking silhouette, but with Nike’s new technology infused.

“I’m really into the ’50s and oldies, and I like old tin cans and old rockets and outer space and all that stuff,” said Salazar of some of his personal interests. Hence the reason his shoe features a cool little rocket ship on the sole. Salazar also pointed out that he likes to surprise people, so he told Nike he wanted to make the tongue of his shoe interchangeable. “I wanted to have fun with the shoe and I wanted it to be functional for people,” said Salazar. “Some people like to tie their shoes real tight and some people keep their shoes real loose. Some people like a thin tongue, some people like a real thick tongue,” he said. He also wanted Sacramento-area residents to connect with the color scheme, so he included purples and blacks to match our beloved Kings’ colors.

What really makes Salazar’s signature shoe stand out, though, is the inclusion of Nike’s Flywire technology, something new to the world of skateboarding shoes. Basically, shoes with Flywire are really light, yet really supportive—two attributes not normally associated with one another in the sporting shoes industry. In the past, more material meant more support, but in turn the shoe got heavier. But with Flywire, Nike took Kevlar and spun it into an embroidery-thin thread for reinforcement, and then they added Lycra in areas that needed power and stretch. According to Salazar, they feel great. “Nike’s technology enables the shoe to be lighter and support your foot more and lock it down really well,” he said of the shoe’s feel.

Sacramentans will be able to witness Salazar ripping up B Street Skatepark in his new shoes on Sunday, March 7, at the official shoe launch demo along with Nike teammates Paul Rodriguez, Stefan Janoski, Brian Anderson, Justin Brock, Grant Taylor, Daryl Angel, David Clark, Elissa Steamer and Brad Staba. Anyone who knows anything about skateboarding knows those are some heavy hitters and that this event is will not be to miss. As our conversation was coming to an end, Salazar closed with a bit of advice for the young skaters out there. “The one most influential person that told me how to get shit was John Cardiel, Sacramento’s best skateboarder ever. Whenever I was trying something, just trying for hours and hours, he’d yell out, ‘You’ve got to want it! You’ve got to want it!’ That stuck in my head forever, so if there’s any message I’d give anyone, it’s that.”

Catch Salazar and the Nike SB team on Sunday, March 7, 2010 at B Street Skatepark. Demo starts at 2 p.m. 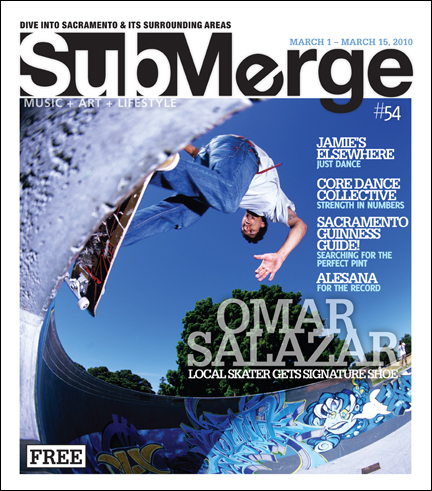