A Bridge to Your Glass

“Hello,” they said, apologizing for the door not being open all the way for us upon our arrival. “We’re a little temperature conscious around here,” they joked.

The two are Michael Gelber, owner of Rail Bridge Cellars, and Michael Chandler, one of only three level-two sommeliers living in the Sacramento area and brand developer for the winery. Behind them, French oak barrels filled with aging wine, a handful of them new French oak, were stacked four-high on racks that stretch to the ceiling. It’s a hell of lot cooler in the winery than it is outside, a steady 55 degrees, which is crucial for the aging and storing of the wine. In fact, everything about the wine takes place right there in the urban winery, Sacramento‘s original urban winery, says Gelber. From the crush to the fermentation, aging to the blending, Rail Bridge Cellars is the real deal. The only thing that isn’t done there is the growing of the grapes, but that’s not an issue.

What makes an urban winery successful in creating great wines is immediate access to good fruit. A winery like Rail Bridge can source their grapes from nearby wine growing regions that are each just under an hour away. Plus, because Rail Bridge’s production is so low (they bottled about 1,400 cases this past April), the availability of higher quality grapes becomes easier, giving them access to just about whatever they want. For now, 90 percent of the grapes they buy come from the Napa Valley, the Oak Knoll AVA (American Viticultural Area) to be exact. 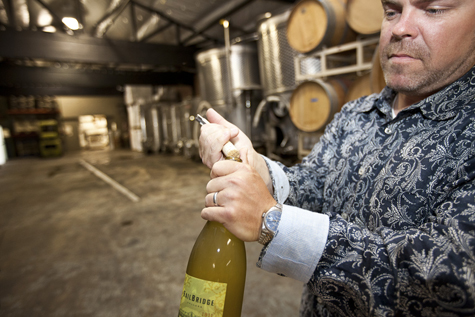 Three of their five reds are blends and that can be a delicate science where too much of one thing or not enough of another can make a world of difference. So being particular about what grapes they select and what AVA they come from is crucial. A wine like their 2007 Lattice Cabernet Sauvignon Reserve is blended with Cabernet, Merlot and Cabernet Franc, which all spent two and half years in French oak. Rail Bridge’s Cabernet Franc shines brilliantly in their blends, even though its percentage can be as low as 1 percent, such as in their Merlot. With the Lattice, it calms the big tannins of the Cabernet Sauvignon while putting a feather in the hat of Merlot.

The fruit may be sourced locally, but the blend and the palettes behind this wine and others like 2007 Right Bank, a blend of Merlot and Cabernet Franc, are certainly Bordeaux. That influence stems from the first winemaker and creator of the winery, Jon Affonso. Affonso’s winemaking experience brought him “to Chateau Angelus, a Premier Grand Cru winery in St. Emilion, France, where he learned traditional French winemaking techniques,” explained Gelber. “He really understood Bordeaux wine and blending.” From there he worked in Sonoma and Napa at various wineries before he decided he wanted to start making his own wine and to start a winery that would live right here in Sacramento.

Affonso gathered some investors, and Sacramento’s first urban winery was born. From there, the story sounds a lot like that of so many other talented winemakers and amazing wines that have come and gone throughout the years. All the components were there for success except the one thing that really keeps it all going: money. The investors decided they were no longer going to support the venture and the hand was on the plug, ready to be pulled. Enter Gelber, Chandler and new winemaker Ron Runnebaum. “Hand off the plug!” they exclaimed with gusto. It wasn’t quite that dramatic, but you get the point.

Why save a sinking ship? Well it depends on what’s on the ship. 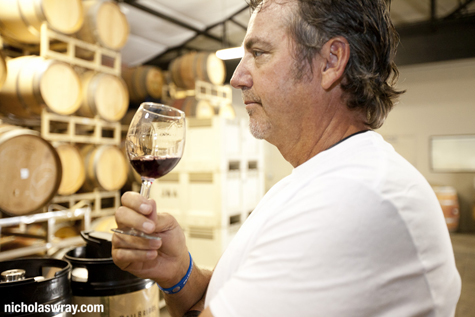 “The whole of it was worth more than the parts,” said Gelber on stepping in to take over Rail Bridge. “The truth is the wine, name and fact that it was Sacramento’s first urban winery were the reasons why it made sense to keep it going.”

With Gelber and Chandler breathing new life into the winery, the next step was to make it their own. Starting from scratch may have set them back a bit on re-launching the brand, but they didn’t have to deal with that.

“When we took it over, we had a ton of juice in here that was already harvested, was fermenting and barrel stored,” said Gelber.

Chandler, whom Gelber described as “the face and the nose of the winery,” was brought on to manage the brand. First thing he did was assess all that “juice” they had inherited as well as look at what Affonso had created before and how they could improve upon it. Affonso was making two wines: a Lattice (meritage) blend of Cabernet, Cabernet Franc, Merlot and Malbec as well as a white–Sauvignon Blanc. Chandler didn’t like this one bit, and for good reason.

“The biggest issue was, you make a Sauvignon Blanc and Meritage, the two hardest wines to sell on a retail wine shelf and restaurant wine list in California, if not definitely our region. So why are you only making wines that are the two hardest things to sell?”

No sense in making a waste of good juice; all they needed was a little reinventing.

“The reputation for the wine was good, but needed more variety,” said Gelber.

Wine varietals in the United States need only contain 75 percent of the named variety in order to be called that. Fun fact and something to look out for when drinking wine, because your bottle might not have the pedigree you think it does. In Rail Bridge’s case, the French Bordeaux influence was retained (even with new winemaker Runnebaum, who interned in Burgundy) and the blends are what make the pedigree. In addition to the 2006 and 2007 Lattice and 2007 Merlot, there is also their Right Bank wine. With a blend of 61 percent Merlot and 39 percent Cabernet Franc, this wine has become a favorite among consumers. What’s interesting too is that not only are the wines of Bordeaux’s right bank consistent with this blend, but Right Bank happens to also be a reference to Sacramento, which lies on the right bank of the Sacramento River. 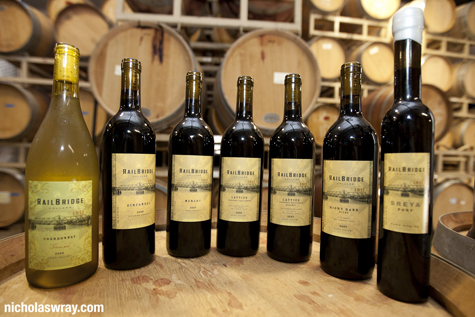 In addition to stretching out the blends and creating new wines, Chandler also added a Chardonnay called “Sienna,” which is named after Gelber’s daughter. Chandler wants to take Rail Bridge’s Chardonnay in a different direction, away from the big buttery wines that have been made popular by giants like Rombauer. He’s aiming for a brighter, more crisp and acidic Chardonnay but still with a considerable backbone. He aims to reinvent their Sauvignon Blanc program as well.

“People were getting away from Sauvignon Blanc because it was too lean and acidic,” said Chandler.

But he feels there is a return, and he’s hoping that will be good for Rail Bridge and the sales of their Sauvignon Blanc. So far, he’s off to a good start. Rail Bridge wines can be found at Ella, Biba, some of the Paragary’s locations as well as the wine department of Bel Air grocery stores. Chandler is also championing another interesting new addition to the retail wine world: wine kegs. Specially designed kegs with plastic liners that hold 15 bottles are on the Rail Bridge agenda. Magpie Catering is already on board and larger clients are in the wing. Move over Red Bull backpacks, because the keg can be strapped on, making filling and re-filling mobile. Be on the lookout for Rail Bridge opening up in a new space inside the historic Elk’s Lodge building located off J Street in downtown Sacramento. A VIP tasting room in the penthouse will be open for reservations as well as private access to club members.

The I Street bridge that is featured on the Rail Bridge Cellar label is significant for its iconic Sacramento imagery but also signifies the linking of Sacramento to the wine country. The bridge passes over the Sacramento River and connects travelers to Yolo County, Napa and Sonoma where wine is a religion. Gelber and Chandler have great pride for their city and a Q and A on their website states that, “We think a wine begins with a simple question ‘What does Sacramento want to drink?’” It sounds like a great start to Rail Bridge’s new beginning. 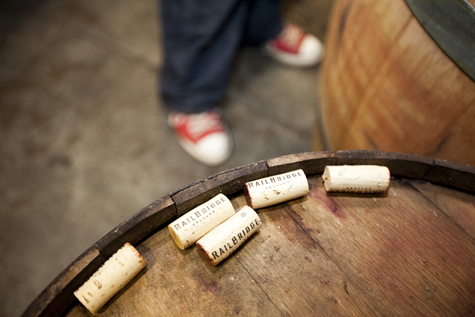 For more information about Rail Bridge Cellars, including their list of wines, go to Railbridgecellars.net.