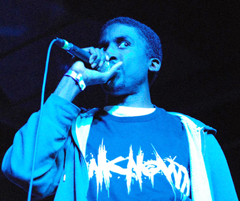 Out with the old: Local rapper extraordinaire Random Abiladeze has changed his name to Rasar. In an email sent out to fans and friends in early December titled, “No More Random Abiladeze…” (which for a split second made us really nervous), he thanked everyone for their support over the years and announced the name change. “As of Tuesday, Dec. 4, 2012, I have officially changed [my name] to RASAR. The short version of its meaning has to do with the Kemetic (Egyptian) deities Ra and Asar and the fact that my former initials were already RA.” He went on to point out that he’s working on a few releases under the new moniker, including a free solo EP titled The Dream Is Over, which will be released in early 2013, as well as a “highly transformative duo album” called Divine Science, which will be completely produced by Styles 1001.

“We will release it under the group name Mellow Nine,” he said. Later, on his Facebook page, he further explained the new name.

“Rasar just resonates with me,” he wrote. “Aside from the mystical/mythical inspiration, it’s just time for change. Rasar is simpler and more connected to my purpose as an edutainter. I had my former name for nine years and that cycle has completed. The next chapter is now unfolding for all who care to walk with me a while.”

Call him Random Abiladeze, call him Rasar, call him whatever you want, we’ll just simply call him one of Sacramento’s best.