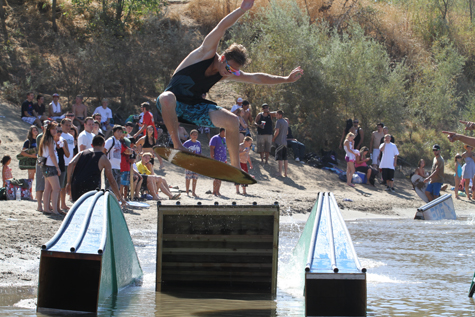 One day every summer, people line the American River to watch guys, and the occasional girl, go airborne on skimboards at Paradise Beach. Riders, as they’re called, propel themselves along the water before launching off ramps and grinding rails.

“Skimfest has I think the best reputation of any flatland comp in the world so it’s quite a big deal,” Sam Price, owner of New Zealand board company OXS Skimboards, said via e-mail.

Greg Krolczyk, director of the skimboard retailer Skim City, is a wave rider himself, but he expressed mad respect for Sacramento’s flatland riders over the phone.

“I’ve seen the videos. They’re killing themselves. They’re skimming on nothing,” he said. “God bless them. I appreciate their imagination and dedication.”

Think of flatland skimming as skateboarding just beyond the water’s shore, minus the wheels.

Riding a wooden board over hand-built ramps made of wood and PVC, in water that is only inches deep, is risky business as far as Krolczyk is concerned. 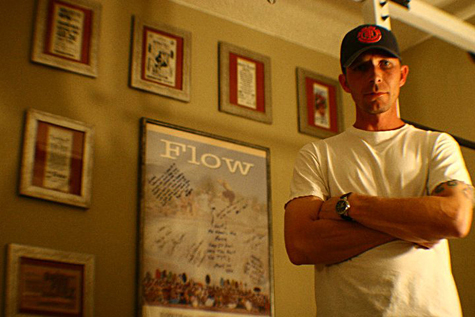 Little did Skimfest cofounders Lon Porteous and Mark Robinson realize that when they began blending the features of skateboarding with flatland skimboarding in the ‘90s, they were pushing the sport into new territory that would have wide-reaching influence.

It is the innovation and longevity of Skimfest that has put Sacramento on the map in the skim world.

Unlike wave riders, who flock to Laguna, Malibu and Florida to skimboard, flatland riders can ride on any large body of water.

“Ninety percent of the people in the world don’t live near a break you can skimboard at,” Porteous said, but most people live nearÂ a lake or river where you can set up skim ramps.

And Paradise Beach along the American River has been a hotspot for flatland skimming for years.

This is where the new school of flatland skimboarding started, Porteous said. He has been skimboarding for the past 25 years, starting in his teens. At that time, performing an ollie on a skimboard was unheard of.

These days, Sacramento Skimfest draws an average of 60 competitors, including about 30 sponsored riders, to Paradise Beach each year. Competitors travel from nearby locations like Granite Bay and Yuba City, and further locations like Utah, Washington and Vancouver, British Columbia. Competitors are broken up into the beginner, intermediate or pro division, which consists entirely of sponsored riders.

Pro flatland riders like Blake Zimmerman and Lexi Hutchings have shown up to compete in past years, in addition to pro ocean riders like Brandon Rothe and Morgan Just.

Matt Matteucci, a local flatland rider whose past sponsors have included Kayotics Skimboards and Ground Zero Boardshop, is currently the primary organizer of Skimfest. After competing in 2005 he became increasingly involved with Skimfest in the following years. 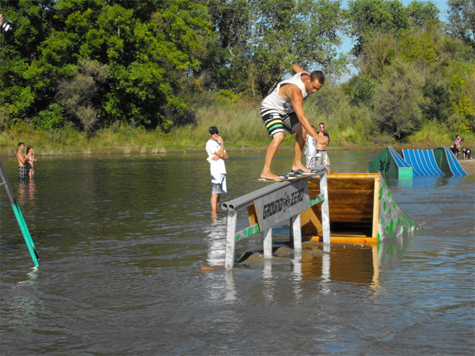 Along with Porteous, he did most of the legwork to produce Nothing Is Cool, a film of the flatland skimboarding scene in Sacramento that came out under Blister Productions in 2007.

Though Robinson is no longer involved, Porteous has recruited other local riders like Matteucci to help keep the competition going. At this point, Skimfest is the only flatland skimboarding competition run by riders, Porteous said.

Each year, a couple of weeks before Skimfest, Matteucci, Porteous and other riders build the ramps, which are often inspired from setups used for skateboarding or snowboarding.

The event has been on the up and up as the skimboarding scene has continued to grow over the past five years, Porteous and Matteucci agree. The event’s increase in popularity, along with its generous first place prize, has doubled the number of sponsored riders since its early years. Last year, the first place winner of the competition received $1000.

Submerge had an opportunity to speak with Porteous and Matteucci about the evolution of Sacramento’s skim scene, the shortage of female competitors and the far-reaching influence of Skimfest. The following is an excerpt from the conversation. 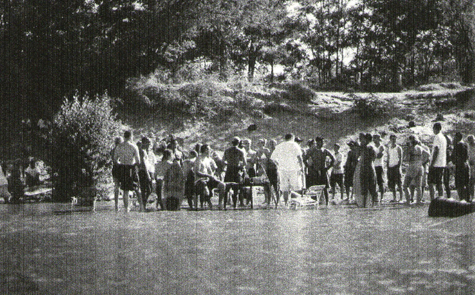 So, where I come in, is growing up in Sacramento, part of the skateboard side of it [was] we realized we could do a lot of our skateboard tricks on our skimboards. So, we ended up taking a lot of stuff and crossing it over, at a time where people were just basically sliding down the beach or trying to do headstands or basic tricks.

We turned around and were like, wait, we could ollie a board, we could make rails. You know, we could do a rail slide, we could do everything we do on a skateboard. So me and a guy named Mark Robinson… we ended up progressing it.

In terms of who’s putting together all the ramps and stuff…
Matt Matteucci: You’re looking at us right here. I mean we have other people that build. Most of the time we build at [Porteous’] house.

So I get the impression that this is more of a guy’s sport. Is that accurate?
LP: Yes. And no. We had more girls in our first year at Skimfest than we have now, which was great. There are some really, really talented girls that skimboard. Unfortunately, the girls that came through in Sacramento are no longer living in Sacramento. They have also progressed. There was a girl on my skimboard team, and she is now an ocean skimboarder. She competes.

And so, I think it just depends, because without a major influence like that, you know, somebody that a lot of girls can look up to and say, “Yeah, I could be as good as her,” or “I can do that” … they don’t have anybody to really be that role model. But there are scenes that have a really good girl turnout, like Washington, Vancouver. I would even say Utah had a pretty decent girl turnout.

I would be happy if I could just have four girls come that want to compete. I would bend over backwards to do whatever they want. But you go down to the river and it is all guys. 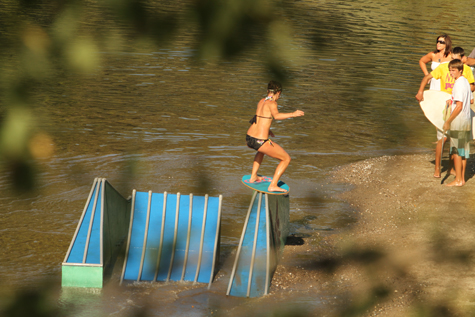 Yeah. I was hanging out over there one day, and some guy tried to show my friend how to skimboard. She got a nice red raspberry on her ass. I mean, it was her first time.
LP: Yeah, and I have the same raspberries, so tell her not to feel bad about it.

Speaking of [that], I was looking at some of those videos, there are some really crazy ways that people go down on those boards. Do you get people who are really injured, or …
LP: We never, ever, ever have had people get really messed up or anything. I mean, yeah, the normal rashes, scrapes. Most of the time, the worst thing that happens are elements in the water. So glass or something like that. Or nails. Like I’ve seen one kid have a nail go completely through the bottom of his foot. Yeah, and there’s nothing better than a rusty nail that’s been lying in the water. You probably end up with the same injuries you’d get skateboarding, like you break your hand or you break your wrist. 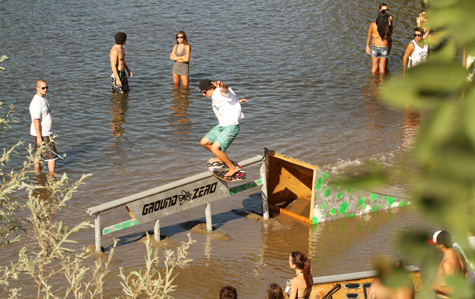 Would it be accurate or fair to say that more people know about Skimfest outside of Sacramento than the people in Sacramento? And how far out do we have a reputation?
LP: Global. Worldwide.

Put it this way, you don’t know how big of an influence you have on other places until you go.

When [Price] got here, I had chests of old swag, Skimfest shirts, stuff like that, that are new. And he said, “You don’t even understand how much this stuff would be worth [in New Zealand].” And I was like, “What do you mean?” [He said] “People covet you guys, you don’t even know, because you’re from Sac.”

And so here are these people saying how much influence we’ve had on their scenes. And it was nuts, because I just thought I was giving him some Skimfest shirt.

Sacramento Skimfest 2011 will celebrate its 15th year on Sept. 10 at Paradise Beach (Glenn Hall Park). Registration runs from 9—11 a.m. and the competition will take place from 12—4 p.m. Registration fees vary depending upon your level.