Things that Go Bump in the Night 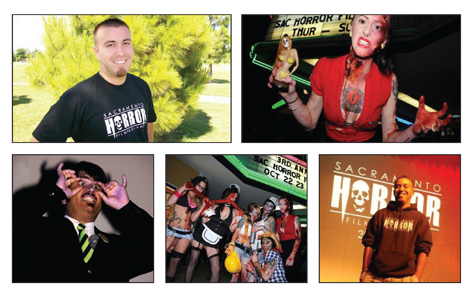 The Sacramento Horror Film Festival returns to swallow your soul

Hamsters can make the perfect family pet. They are very cute, very fuzzy and very thirsty for human flesh. The fluffy monsters will kill your friends and terrorize your neighborhood as they cackle and stare into your soul with their beady red eyes. If you turn your back on them, they will eat you from the inside out, showing no mercy. At least they will according to Tim Meunier’s favorite short horror film, Night of the Hell Hamsters. This cheesy horror film, along with hundreds of other frightening flicks, is part of the Sacramento Horror Film Festival, a four-day event that is ready to kick off Halloween. But this is not your average film festival; not only is it fully loaded with independent films, it also contains shorts, documentaries, music videos, animations, live music and even the Zombie Beauty Pageant.

Since 2007, Meunier, the founder, director, programmer and head of staff of the popular growing festival, somehow finds time to work a full-time job and view every single horror film that is entered into the festival–all 4,800 of them!

“I watch every film that rolls through the doors and as soon as the festival is over, I start accepting entries again. So it’s a year-long process,” Meunier said over the phone after working a long, “chaotic” day. “Of course a lot of people wait until the last minute so it gets a little hectic.”

Throughout the year of watching those flicks, Meunier’s trained eye looks past the blood, guts and killer hamsters to catch the numerous aspects of each film. He watches for production quality, editing, acting, direction and most importantly originality of the storyline.

“My goal in the festival is to show entertaining films that you are going to remember and to promote new talent that can hopefully move on to make bigger films,” he added. “Every movie in the festival I am a personal fan of and I think that somebody will like it because I liked it.”

But in a dwindling economy, this horror film lover struggles with cash flow. After five years of finding cash sponsors to support the event, this will be the first year that the entire four days of horror will be funded by Meunier himself. He and his staff also struggle to find appropriate places to advertise for the event. 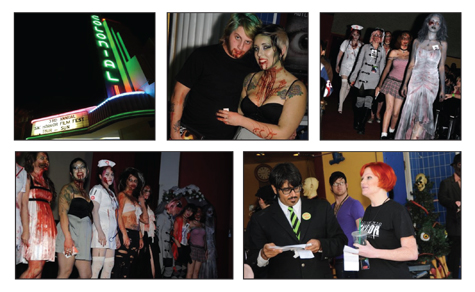 “We’ve been turned away from some businesses because of the type of event. We get treated like the unwanted child of the film festival community,” he said.

Advertisers might be hard to find these days, but the fans are not. Meunier and his staff have garnered a following called the “little horror family” in the Sacramento area. The turnout for the festival has ranged from 1,000 to 2,500 people for one weekend. “It’s like a reunion every year for some of these people and it feels good. We have some die-hard fans.” Every year the staff can expect to see the same faces returning to support the festival. In the past, one Sacramento resident parked his RV in the parking lot in order to be the first person in line for the films and entertainment.

“Our crowd is the Horror Film Festival. I don’t know what it is or if it’s something they put in the popcorn, but we have very vocal crowds, they are very boisterous. It’s almost like all day is a midnight screening,” Meunier said. “It’s not your typical film festival environment.”

The horror family for the film festival has found a “cozy little joint” to call home at the historical Colonial Theatre. The atmosphere of the old venue speaks for itself. “It’s a one-screen theater, and they have pro-wrestling matches there every month. So sometimes the concrete is a little red-stained from whatever matches they had. It has a creepy, rough environment, so it’s very fitting.” 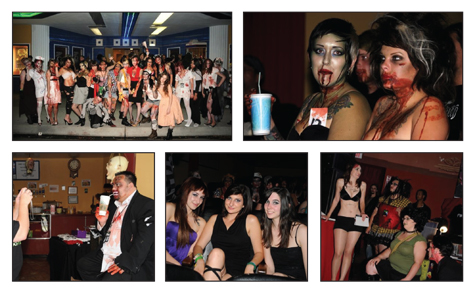 In the beginning, the idea of the festival started off with Tim doing a little research and asking questions of film festival directors around the country, including Greg Ropp, president of the Eerie Horror Film Festival in Pennsylvania and Nathan Schemel, local director of the Sacramento Film and Music Festival. “When I first started I didn’t know there wasn’t a horror film festival in town,” Meuinier said. “I just Googled stuff. I wasn’t involved in the film community that much, I didn’t know if there was a demand for it. I didn’t know if five people were going to show up or 500 people were going to show up.” As a former paranormal activity group member, Meunier found friends that were willing to help out with the cause and after five years he has kept the majority of the same staff members. Over the years, the 32-year-old has learned that some of the best independent or big screen horror flicks have some of the lowest budgets behind them. “A lot of these films require using friends and family. It’s like, ‘Hey mom, do you want to get killed in this scene?’ Even the big Hollywood horror films are nowhere near the budget of the Avatar’s. I don’t know if I’ve ever seen a $150 million horror film,” he said. “But it’s great practice for independent filmmakers to make low-budget films, because they are still going to have to cut corners, even if they make it big.”

Whether it’s Nightmare on Elm Street or Night of the Hell Hamsters, the Sacramento Horror Film Festival wants to leave you with one thought: that horror films are made for an audience to scream at, jump at and even laugh at. “When I get scared I love it. It’s like a drug to me. I don’t drink, I don’t do drugs, I’m addicted to horror. It should never be taken seriously. To me it’s the fun house mirror of society. It’s taking real issues and giving a funny take on it, a unique take, splashing some fake blood on the situation, or amplifying the situation to make it easier to deal with. That’s what the horror film is.”

The Sacramento Horror Film Festival takes over the Colonial Theatre from Oct. 20—23, 2011. Tickets for each event can be purchased a la carte at the door for $10 or an all-events pass will cost just $30. For a full rundown of all that the SHFF has to offer, or to purchase an all-events pass, go to Sachorrorfilmfest.com.