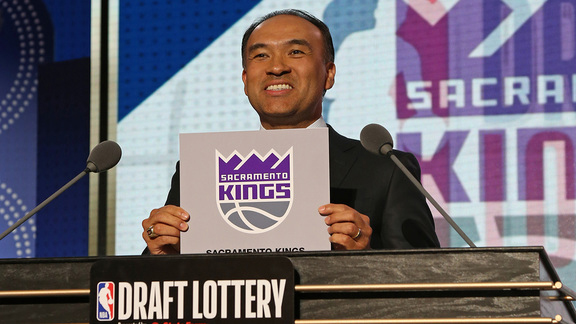 Last week, local basketball fans went berserk after the Sacramento Kings landed a number two pick at the NBA draft lottery, with the Phoenix Suns winning the number one pick. The Kings came into the lottery with the seventh slot, so the jump up to number two was a big one. “The basketball God is at work!” longtime voice of the Kings Grant Napear said in a tweet. “This is the most important draft pick in Sacramento Kings history,” wrote popular blog Sactownroyalty.com. “The Kings were the big winners on lottery night,” penned Gary Parrish on CBSsports.com. This marks the first time in the Sacramento era that the Kings have held the number two pick, which sets them up nicely to draft one of the league’s top incoming prospects, like Arizona’s star Deandre Ayton, or Slovenian phenom Luka Doncic. It seems more than likely the Kings will go with whoever the Suns don’t choose, but who knows, a lot can change between now and the draft, which will occur on Thursday, June 21 at the Barclays Center in Brooklyn, NY. Either way, this is huge for the Kings, who have struggled for a long while now. Maybe, just maybe, with another star player and if the actual stars align, the Kings can break their 10-plus-year playoff-less streak.