Sacramento’s brand new professional soccer team, Republic FC, has kicked off its inaugural season! On March 29, Republic FC, which is part of the 14-team United Soccer League’s Pro Division, made a visit to the Los Angeles Galaxy II. The game ended in a 1-1 tie with Republic FC forward Justin Braun (who has over 100 Major League Soccer games under his belt) scoring the team’s lone goal with an impressive header in the 33rd minute. Republic FC has a really good shot at being a stand-out team in the league, and playoff hopes are high. The team is being led by a formidable coach, former MLS and U.S. national team player Predrag “Preki” Radosavljevic. The 23-man squad is a mix of young players and veterans and has ties to MLS’ San Jose Earthquakes and Portland Timbers (in fact, three Timbers players are on loan to the team, reports Sacramento Bee’s Bill Paterson in a great piece titled “Five questions to ponder as Republic FC begins its inaugural season”). 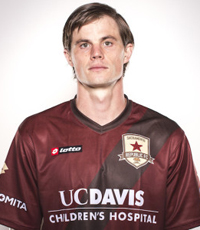 Republic FC has a few more road games before their home opener on Saturday, April 26 at Hughes Stadium (located at Sacramento City College) versus the Harrisburg City Islanders. You can get tickets for as low as $6 right now at Sacrepublicfc.com. Their next two games after that will also be at Hughes Stadium on Saturday, May 3 versus Orange County Blues FC and Saturday, May 17 versus the Los Angeles Galaxy II again. Republic FC’s very own, still under construction, 8,000-seat home facility at Cal Expo will host its first game on Saturday, June 7 when Sacramento will take on Arizona United SC. The Republic FC organization is expecting huge turnouts all year and is already aggressively trying to get into the MLS and eventually wants to build a huge, soccer-specific stadium in downtown Sacramento. We’ll have to wait and see about all that, but for now, we’re just excited about the possibility that Sacramento will have a winning professional team again, not to mention the fact that live soccer matches are ridiculously fun. Get some pals together and we’ll see you at a game chanting Glory, Glory, Sacramento!