Is It In You? • Let Sacramento Roller Derby Help You Become Hell on Wheels 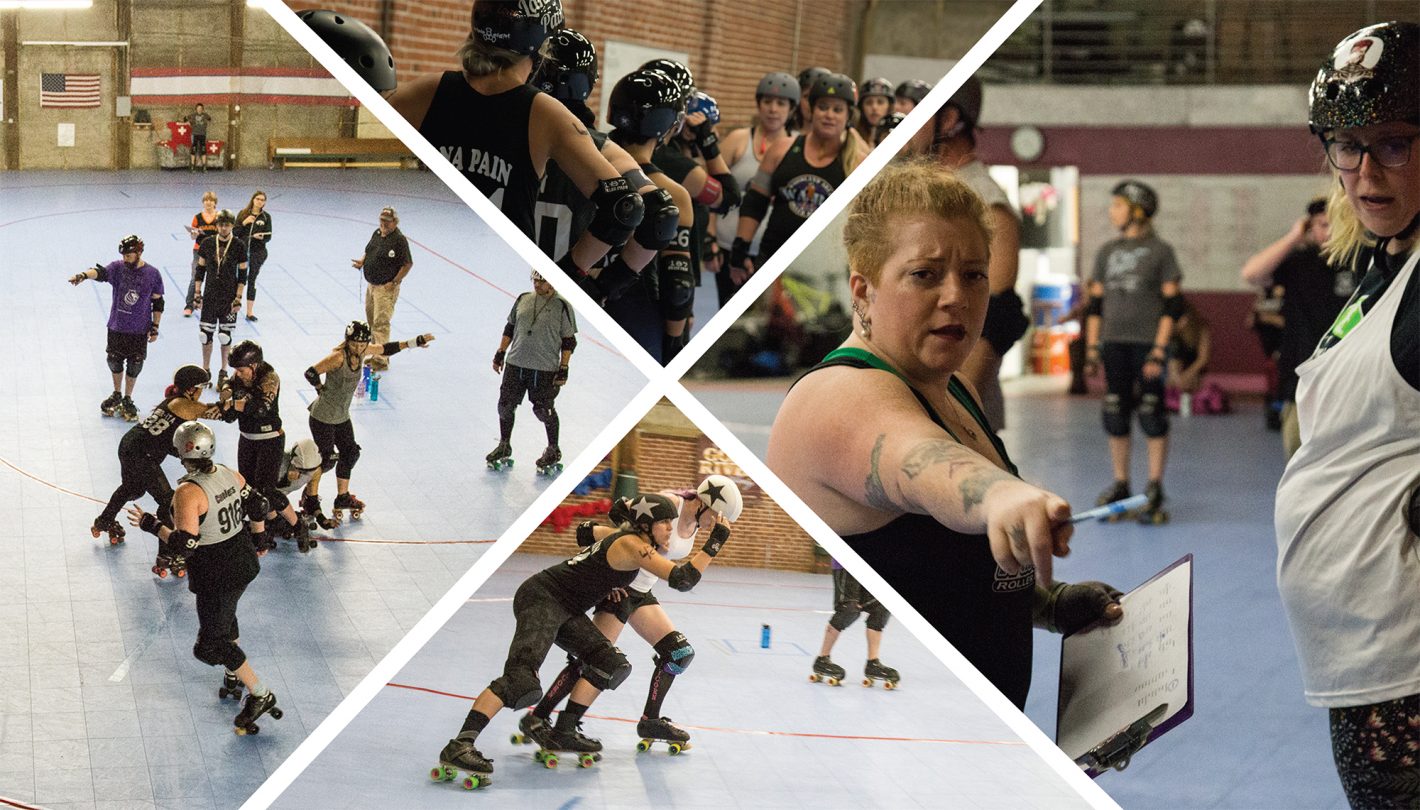 My first time as a spectator for roller derby also happened to be the first-ever game for the newly dubbed Sacramento Roller Derby. Combining the competitive forces of the Sac City Rollers and the Sacred City Derby Girls, the Sacramento Roller Derby kicked off the season on Feb. 10 to a jam-packed crowd of guys, gals, families, babies and tiny tots rocking their own roller skates (while looking on to the “grownup” derby girls like they were gods—which melted my cold, kid-hating heart immediately).

Clearly this was an element: hugs, high-fives and cheerful conversations were not what I was expecting at an event where people push and shove each other in pursuit of scoring points. And score points, they did; the Sacramento Roller Derby A and B teams crushed their competition in the doubleheader that night, kicking off their season on the right foot (er—skate?). Everyone was smiling, laughing, cheering and drinking. Where were the fights? The mean girl spirit? The elbows? The hair-pulling? Wasn’t that what derby was all about?

I had it all wrong. This wasn’t at all about pushing and shoving. This was about family.

Fast forward a month and a half, I call up a former co-worker that I once took with me on a work trip as a chaperone (we had 13 teenagers to take care of, in Denver on 4/20, I repeat: Teenagers. Denver. On 4/20. I couldn’t show fear), because she was a fun travel companion and I knew she would help me bust skulls if I had to (and by “bust skulls,” I mean call their parents/put them on a plane with healthy snacks/not invite them to the next bagel outing, calm down, jeez). This coworker also happened to be a nine-year veteran of the Sac City Rollers—and current member of the Sacramento Roller Derby A Team/Travel Team—meaning she competes at the highest level as part of the WFTDA charter (which stands for Women’s Flat Track Derby Association—it’s pretty cool, look it up). Her name? Red Tornadho. 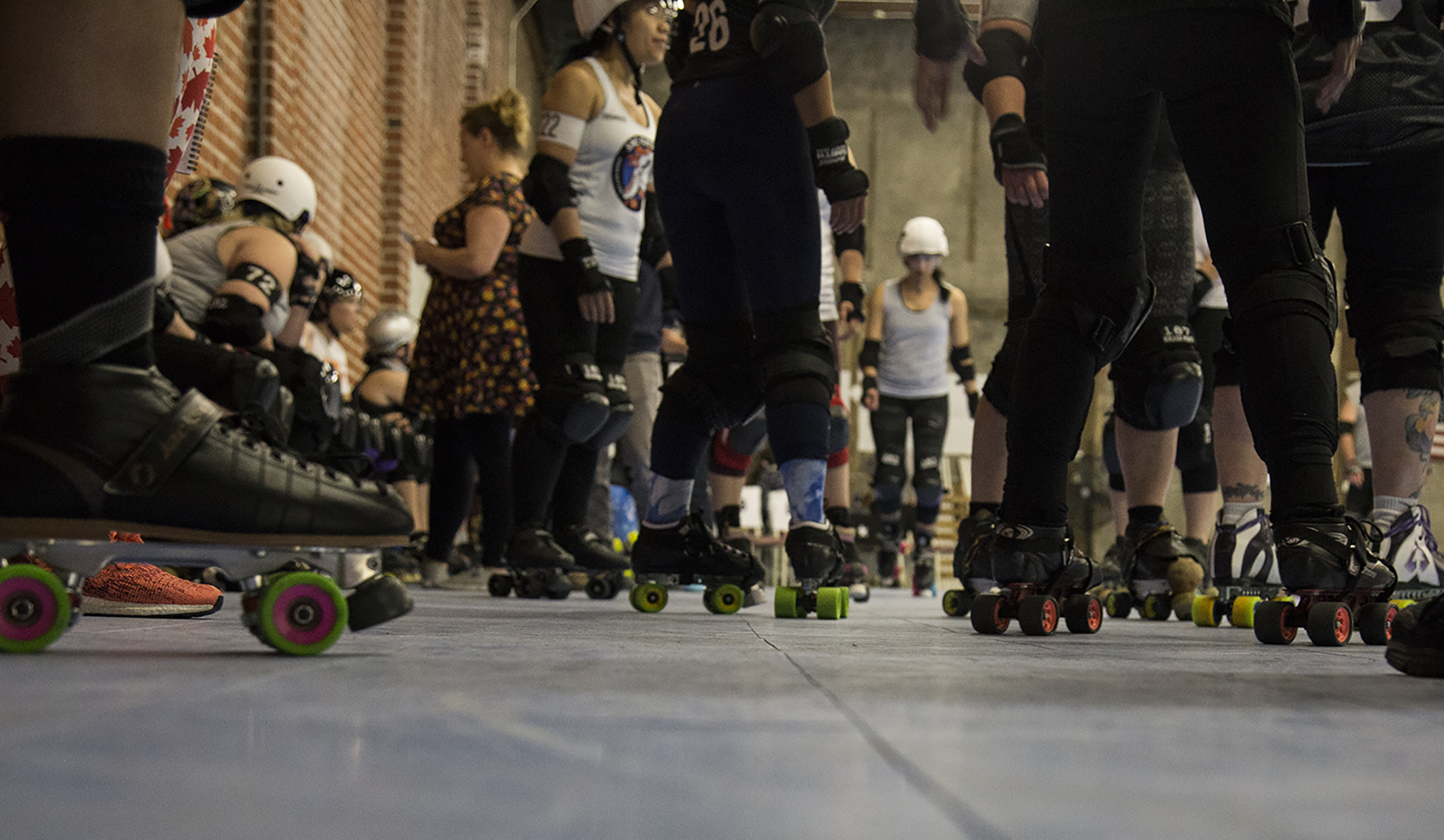 Red tells me they’ve just flown into Dallas to compete in their first sanctioned derby tournament of the year, which counts toward rankings and qualifying for future tournaments. They’re hoping to move up the line. Currently, they’re ranked 62nd out of 400-some-odd-WFTDA-leagues in the world. The team they’ll be playing (at 8 a.m. the next morning, on a Friday, mind you) is ranked 30 steps above them.

As a WFTDA team, Sacramento Roller Derby is allowed to apply to play against teams around their level or better so they can become a stronger team. Red says they tried to choose tournaments closer to California for the sake of their new, bigger, better team after the two Sacramento derby teams merged in December 2017, and they wanted to challenge themselves.

“That’s why we chose to apply for the Dallas tournament,” says Red. “We’re coming in as the underdog.”

At home in Sacramento, the “underdog” consists of four teams within the Sacramento Roller Derby namesake: a traveling all-stars A team, an up-and-coming all-stars traveling B team, a home B team and home C team. And of course, there’s a Junior League for the 8 to 17 age range. Red says the beginning steps of derby typically takes you from the C team with the ultimate goal of making it to the A team. Everyone auditions, and everyone has to go through an eight-week training session. I assumed—again, wrongly—that one must be, in all essence, an Olympic-level figure skater to even consider the idea of derby. Watching these women glide around the track—a few of them defying gravity and at speeds that I can only sum up as pure wizardry—like fucking hell on wheels during the season opener, gave me a huge sense of longing. I want to glide! I want to defy gravity with nothing but wishes and wizardry! I want high-fives!

Who are these women behind the helmets? They’re preschool teachers, nurses, paralegals, stay-at-home-moms, construction workers, hospital administration workers—they’re everyone. “The variety of our backgrounds is as unique as each of us,” says Red. “We would’ve never become friends without this one little thing we have in common that we dedicate a lot of time to. And now I have these girlfriends for the rest of my life. They’re family.” 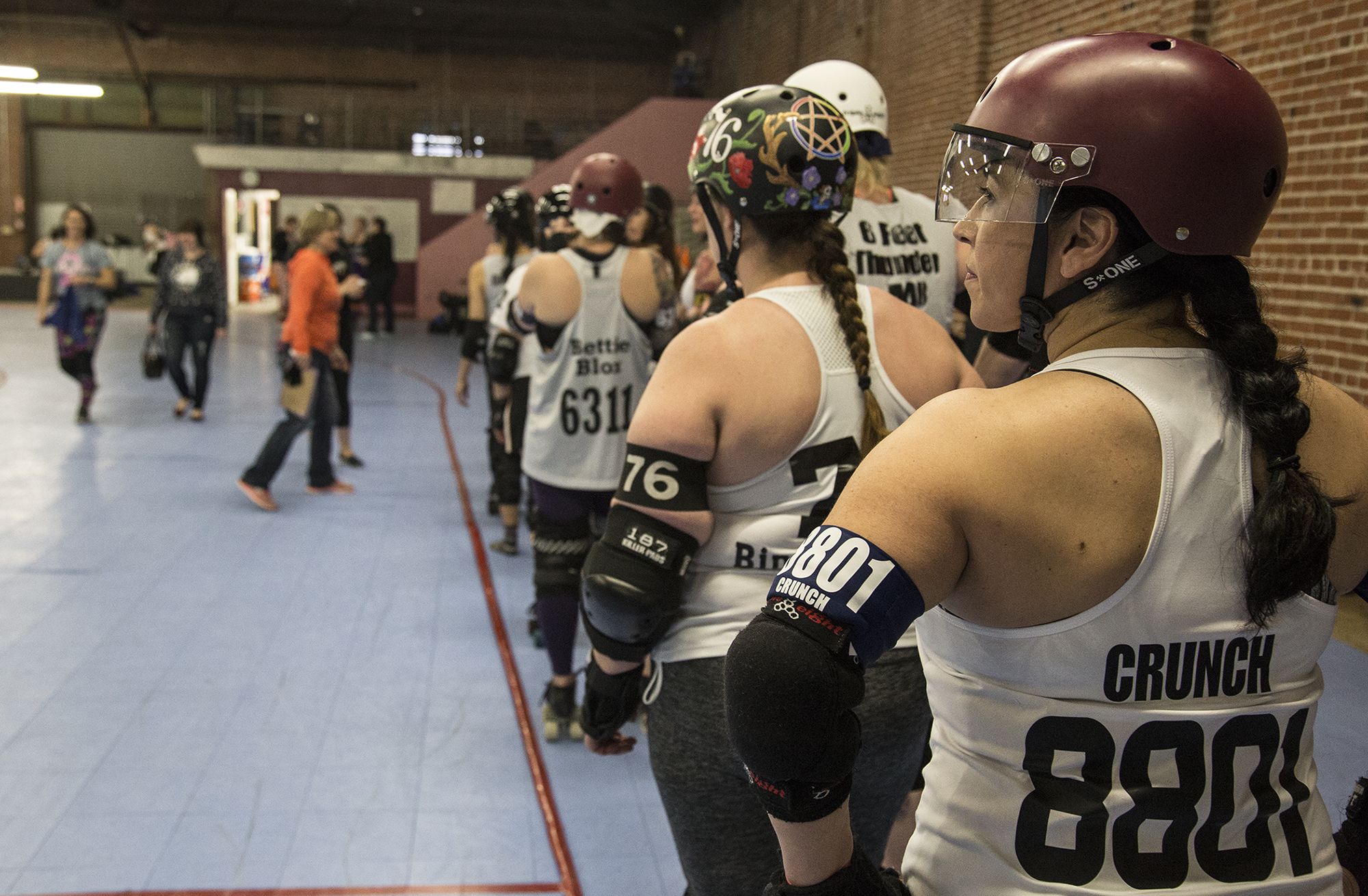 Every week, the team gets together for three or four practices. That doesn’t include additional gatherings if there’s a board meeting. Since the team is 100 percent volunteer-run and self-governed, they have to run the team like a business. Red has been the treasurer for six years and counting (after being the merchandise director for two years).

“And since we’re a non-profit, there’s a ton of laws and regulations we have to stick to. There’s a lot of work behind the scenes,” she says.

Gals drive from near and far to attend practices. Devotion takes on new meaning when you have to drive dozens of miles multiple times a week to throw on roller-skates and do your thing.

“I drive 30 miles to practice, but we have skaters that drive in from Vacaville, Placerville, Sonora, Clear Lake and Auburn, just to name a few,” says Red. I try to imagine driving this distance multiple times per week. I can’t. I broke up with a guy once because he lived too far away—in Roseville.

In addition to regular practices, the team must also be willing to travel to tournaments. Red says the ultimate tournaments happen in the fall, leading up to matches in New Orleans or Spain.

But when it’s family, time and distance mean nothing.

Red comes from a large family. Her parents were more than happy to send her (and a sampling of her nine siblings) to the roller rink for a few hours of cheap babysitting.

“I had my 15th and 18th birthday parties at a roller rink,” she says. “As much as I could get away with going to the roller rink, I would do it. My dad was also a big skater. He taught me how.”

Red admits that she’d seen a few derby matches before she auditioned for the Sac City Rollers. “But I thought to myself, there’s no fucking way I know how to do that shit!” she says.

Like the rest of her derby family, however, it found her—in the bathroom line at Old Tavern. “A girl came up and smacked my hips—she was like, ‘Oh my god, you have hips that could play roller derby!’” Red remembers.

And three months later, she went for it. 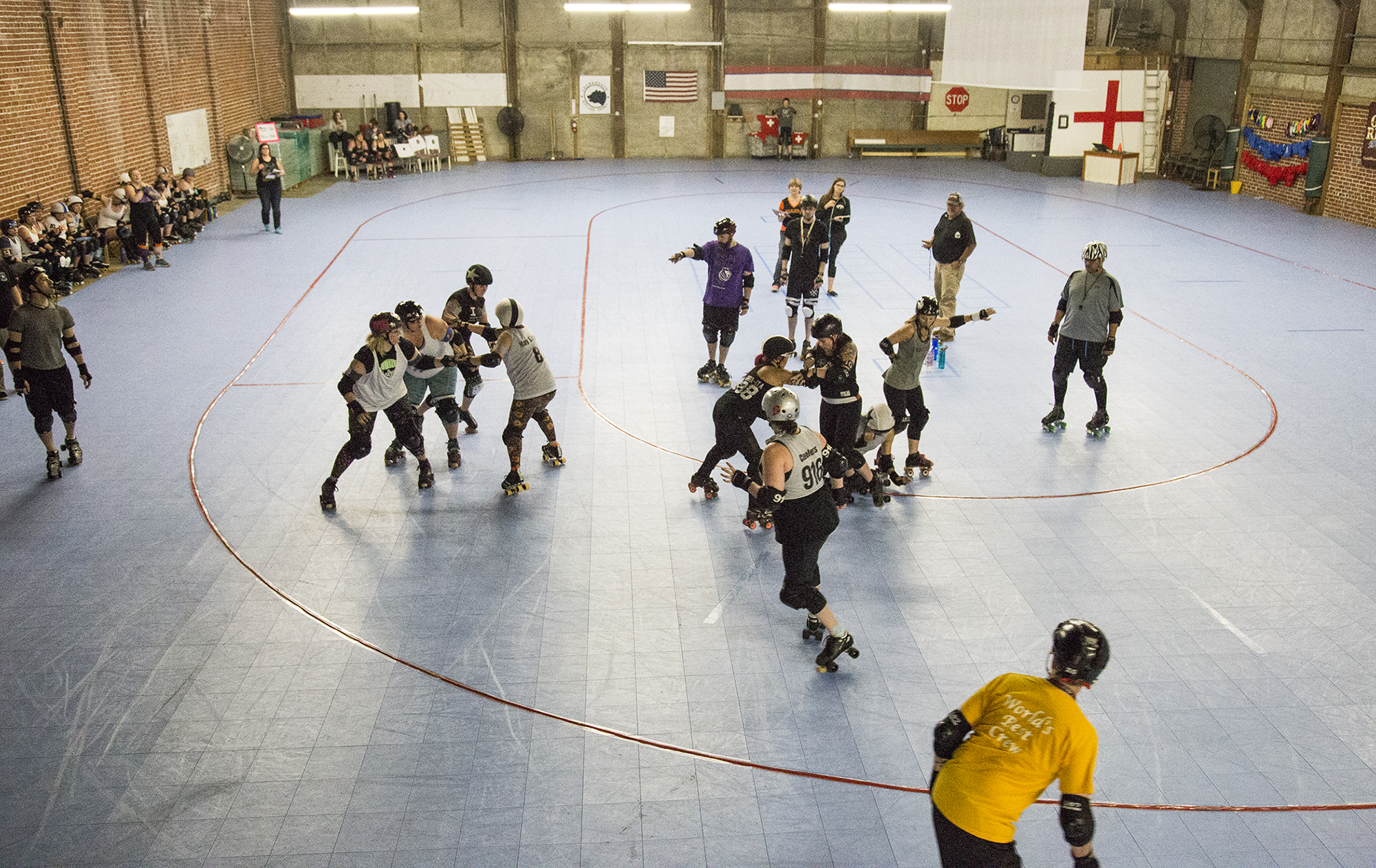 And going for it is exactly what Red suggests for anyone wanting to dip their skates in the derby pool.

“All we ask is that you can stand on skates,” she says. “We have shared skates and pads. We don’t have shared mouth guards, because that’s gross, so bring your own. But we’ll teach you everything. And the first thing we teach is how to fall.” Because once you learn to not fear the fall, you can learn stopping—which is a huge part of the game.

Another part of the game is having a cool nickname. I’m enamored with their snarky puns, with names like Punky Boobster, Pink Freud, Aerial La Twister, and Welt Disney. It makes me wonder where these names come from. I assumed they were earned, like a rite of passage. I pictured a Fight Club-esque rule where you were nameless until the skater gods deemed you worthy of a name.

“Nope,” Red immediately squashes that dream of mine. “It’s a mix. Some people have ideas of skater names, others don’t care. They just want to skate.”

Fine, I say. What about her name, “Red Tornadho”?

She explains: Red Tornado was a comic character from the 30s that, upon hearing the cry of children, would terrorize the house and cause destruction on her way to save the child in danger. “When I cook, you can probably hear me three houses away,” Red says. “I’m not deliberately trying to bang pots and pans. I’m just hustling. My husband actually gave me that nickname years ago. He said, ‘God, you’re just like a Red Tornado in the kitchen,’” and being a redhead, the name stuck.

“Well, it was between that and ‘MisTits,’” she says. “I’m a huge Misfits fan. But then I was like, ‘I can’t have a nickname like tits.’ So Red Tornado won. But then a teammate told me, ‘Honey, this is derby. You can’t be a Red Tornado. You have to be a Red Tornadho.’”

And so it was written.

Before finishing this article, I asked Red how the “underdogs” fared in the big Dallas tournament against the No. 1 team. They won, 243 to 186. It’s a great time to be an underdog. 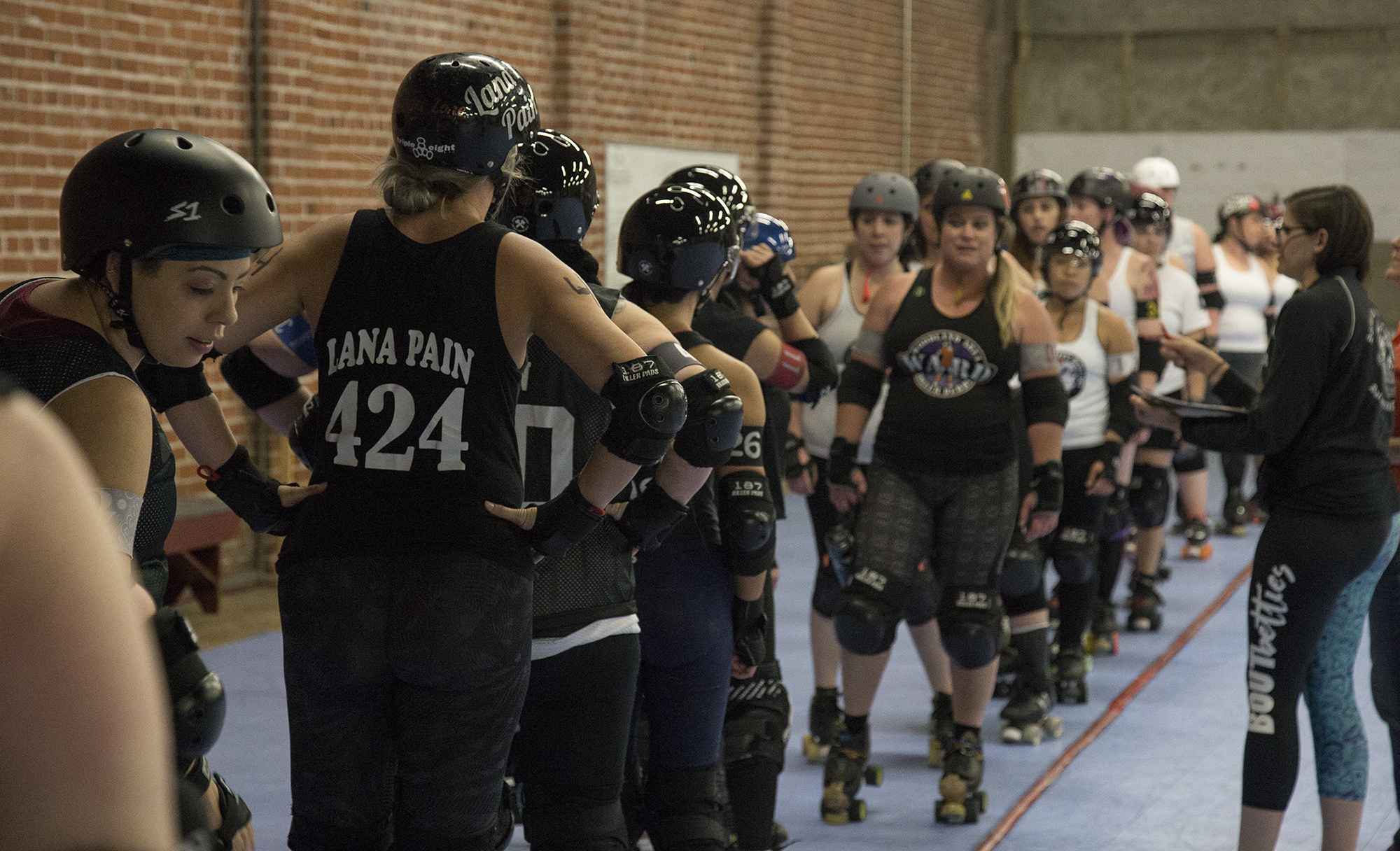 Check out the newly minted Sacramento Roller Derby at their next match on April 14, 2018, and see Red Tornadho and her Capital MaulStars take on Team Gold of Bay Area Derby in another night of double-header action at The Rink (2900 Bradshaw Rd., Sacramento). Doors for this event open at 6 p.m. For more info, to order tickets or to learn about Sacramento Roller Derby, go to Sacramentorollerderby.com.