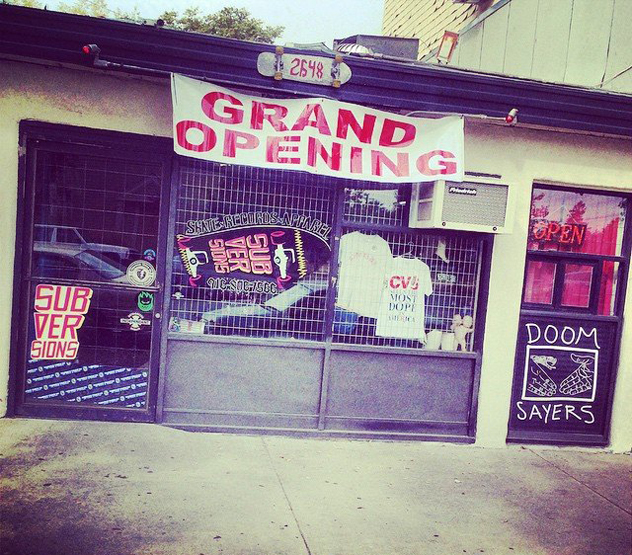 The midtown Sacramento area has long been remiss of a rad skate shop, and Subversions has answered the prayers of local thrashers and then some. Not only can you buy super awesome boards and all the fixings there, but they also have a sick record collection, sweet vintage duds and locally handcrafted candles and jewelry. Doomsayers, a locally owned skate apparel company, has a huge presence in the shop, too. On top of being a really cool store with an inventory unlike any other place nearby, Subversions is a community.

Positioned just down the street (on 33rd and Broadway) from the new skate park just opened in Oak Park, it’s easy for skaters to cruise by to get supplies, hang out and simply belong somewhere. Owner Melody White says, “When I was a kid, I didn’t fit in anywhere, cause I’m a goon, and the skateboard community was a place of refuge. Even if you suck, people are welcoming and it’s a place where everyone can belong. I opened the shop so I could do what I love and give that back to the community that opened its arms to me.”

Subversions originally set up shop in the Colony on Stockton, but moved into its new digs much closer to Midtown and celebrated its grand opening on Oct. 18, at which event the Pets did a most excellent live set. A mixture of crusty old skater dudes, hot babes and young ‘uns were in attendance, and all felt right at home. I feel warm and fuzzy just thinking about that day. 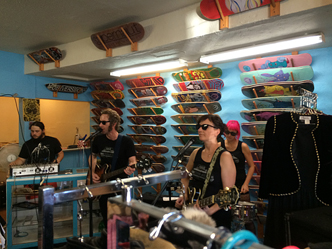 I myself am in the market right now for some Christmas secrets for my thrashers-in-training, and can attest to the fact that there is nowhere in Sacramento you can score such awesome gear for so little. The pricing is set to be as accessible as possible to everyone, something really important to Melody, who knows what it’s like to be a broke ass that just wants to skate.

I asked Mel what she thinks about the spankin’ new nearby skate park, to which she replied, “Holy shit, I love it. There are literally four-year-olds that come in and are all, ‘I’ve been skating all day at the park, can I get more grip tape, oh, my wheels are wobbly’… it’s so adorable because these kids are so into it, and they consider Subversions and the skate park to be home.”

Subversions is currently taking donations of decks, trucks and wheels for kids who can’t afford to buy the new-new up in the shop. Says Mel, “It costs money to skate, and everyone who skates knows that. Sometimes all you wanna do is skate, but yo mama gotta pay that electric bill.” Word, sister, I can relate! Anyway, all that said, this place is a true asset to Sacramento and I hope all y’all hit it up and go skate!

Words cannot express my gratitude for this new addition to Sacramento’s already-popping-off amenities. This free, outdoor skate park, recently built by way of a state park grant, is a godsend to so many seasoned skaters and to the youth of Oak Park.

A project lumped in with various McClatchy Park improvements, the skate park is part of a greater endeavor which seeks to bring back the grandeur of Joyland, the historic amusement park that once stood in its place at the turn of the century when Oak Park was the opulent suburb of downtown. A portion of the grant even funded the recreation of the Joyland arch signage, which is adjacent to the skate park and leads to the entrance of the brand new playgound.

My kids and I visit the skate park every day after work and school. To us, it is a place of refuge, camaraderie, education and lots of bruises. I have befriended many of the “regulars,” one of which is a four-year-old boy named Julian who was alluded to earlier in this column. I asked him, “What does the new skate park mean to you?” To which he replied, “I drive my skateboard here every day! This place is the best and it makes me happy.” Simply put, and hella true. 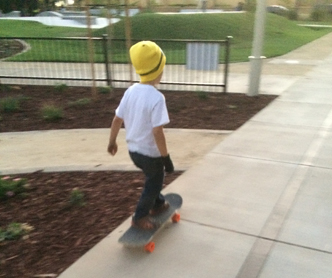