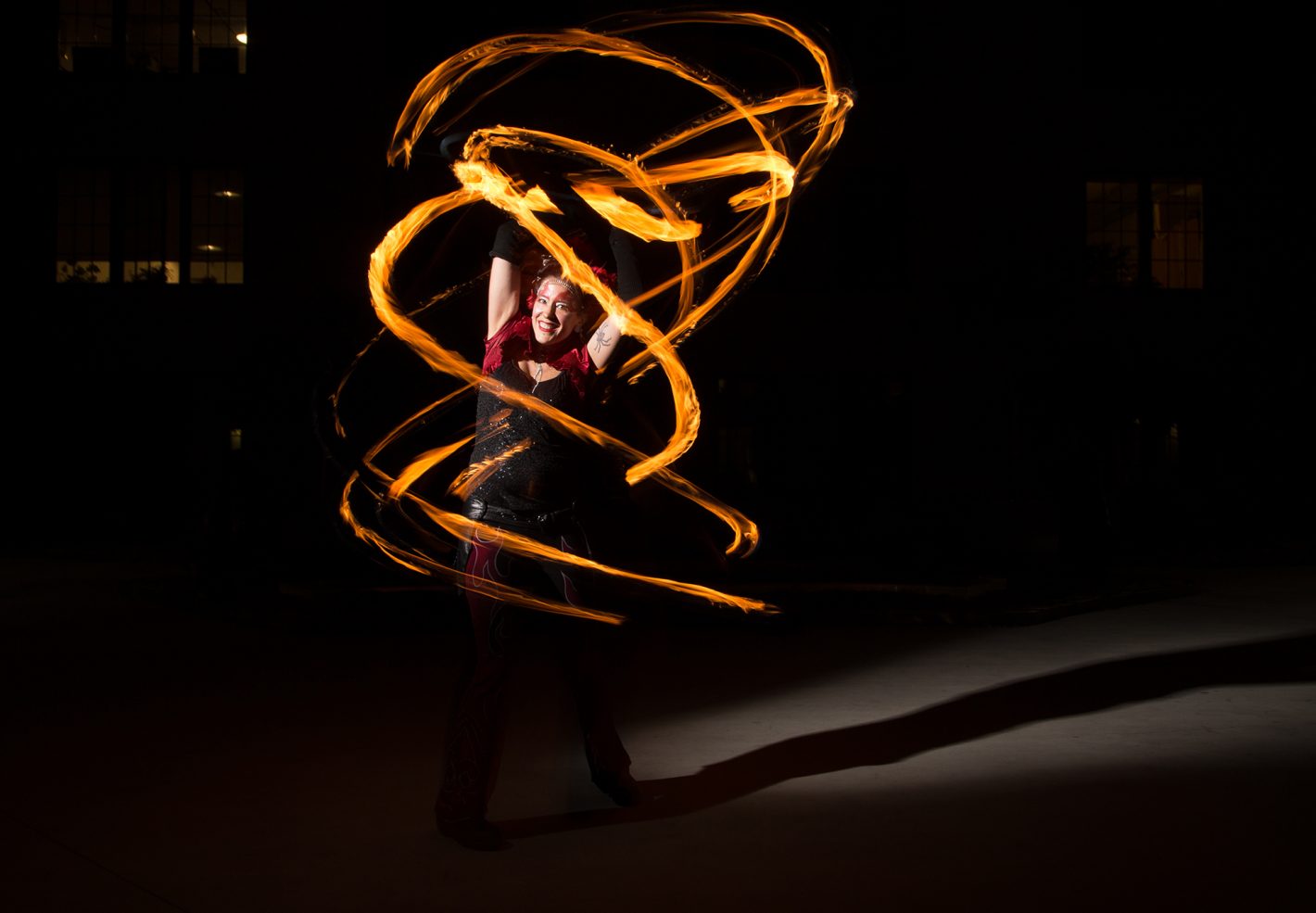 No matter who you are or where you come from, fire is hypnotizing. It’s impossible not to stare. And so it goes with the artistic wielding of flame in the form of dance and performance art. If you’ve been to the California State Fair in the evening recently, you may have seen Sacred Fire, a local dance company that features fire dance performance and is impossible to ignore.

Sacred Fire’s founder, “Sequoia” Jennifer Criteser, recollects, “I had seen many years ago in San Francisco a group of people in Golden Gate Park spinning poi. There were a lot of people and there was a drum circle and they had colorful poi. I remember all these women and colorful things flying everywhere. I didn’t know what it was and just got sort of mesmerized by it.”

It is believed that poi and fire dancing originated amongst the Maori people of New Zealand. It spread like wildfire over a 4,000 square mile area throughout Polynesia. “Poi” means ball on a string in the Maori language, and they were initially used in training for hunting and battle. In the United States, poi wasn’t popularized until the ‘90s when it became a thing at raves, nightclubs, beaches and parties.

Following her first contact with poi dancing, some time passed before Sequoia reconnected with the art form. 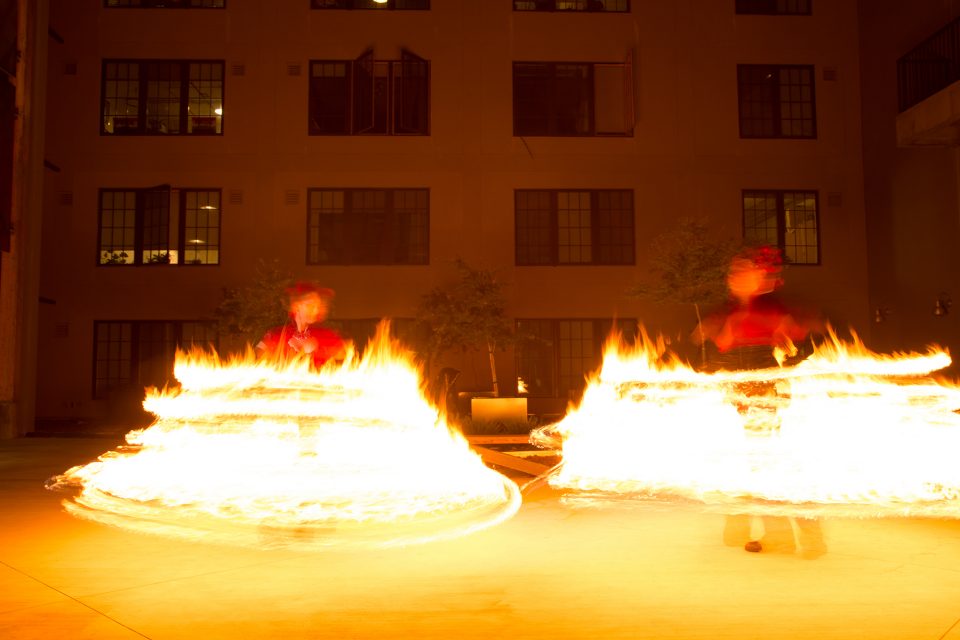 “I kind of let it go, and at some point, I decided that something in me just wanted to explore that. I didn’t know what it was called so I decided to construct my own pair of what I saw. I used tennis balls and braided my own cord, and started just trying to mimic the moves. This was a really long time ago,” remembers Sequoia.

She goes on to describe how Sacred Fire, once called Obsidian Butterfly, later came about: “Fast forward, I had eventually connected with a group out of the Bay Area who put fire in my hands. I never really had thought about the fire part of it, I was just mesmerized by poi dance. This company was a man and a woman and it’s called Fire Pixie. They’d connected me with someone here in Sacramento who was at the same level I was, and that’s sort of how it all came about. Most of the people who started this adventure with me still cameo once in awhile.” 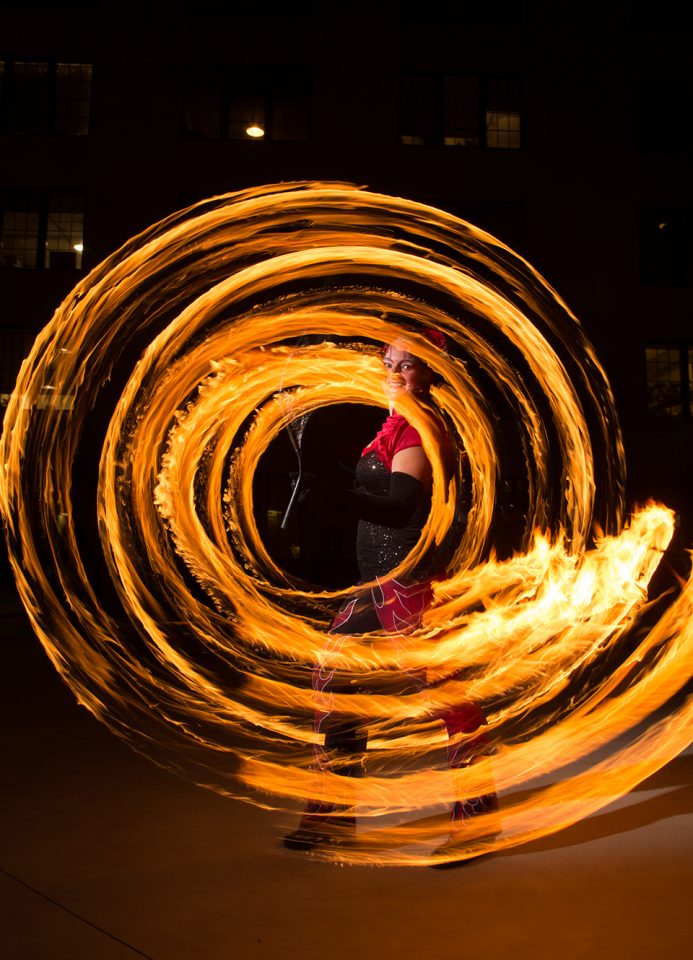 In regards to why she performs, she explains that it’s more about the art than performing. “The performing part has been a major part of it since the get-go. I’ve danced and performed most of my life. I think by nature I am a performer, it’s at the core of who I am. But it was really about the art—movement art and performing art and putting on creative shows.

“We worked through a community called the Horse Cow in Sacramento that was an art community for a period of time,” she continues. “And the Horse Cow was giving us an opportunity and a place to explore, not only to become better performers, but to pursue creative ways to explore our fire. It was really about the art, honestly, in the beginning and the performing and professional company came out of that.”

But beyond art and performing, Sacred Fire also offers education. According to Sequoia, “Everyone comes to the dance to find their own flow, and inevitably that also means to find their own flow through partnership with others … It’s more than just a dance routine. We become close friends. People’s life stories become part of the dance and part of the performance. It’s amazing to help guide people into their heart’s desire, into something that makes them so alive. Some people come to it feeling like they’re not creative enough, and those are the people whose creativity is waiting to burst out. My job is to help them find it and channel it into what we do.”

She continues by explaining how fire itself is another important component of the learning process that she guides, “Most of the teaching I do is to train people to become performers in a company, so it’s more of an apprenticeship and ongoing classes because the process does take so long. Because it’s not just learning dance, it’s learning how to use fire, and that comes with a lot of other elements. Some people are afraid of fire, some people are overly comfortable with it. I myself was super afraid of fire, so respect and humility with it were a big feature for me. And other people who are overly comfortable with it are learning control. Our art form is not a solo adventure. It’s something that, as a fire dancer, we always need fire safety. We don’t ever fire dance alone. As a dancer, I practice dance alone, but I don’t practice fire dance alone. The fire safety people that are side stage are a very important part of our show.” 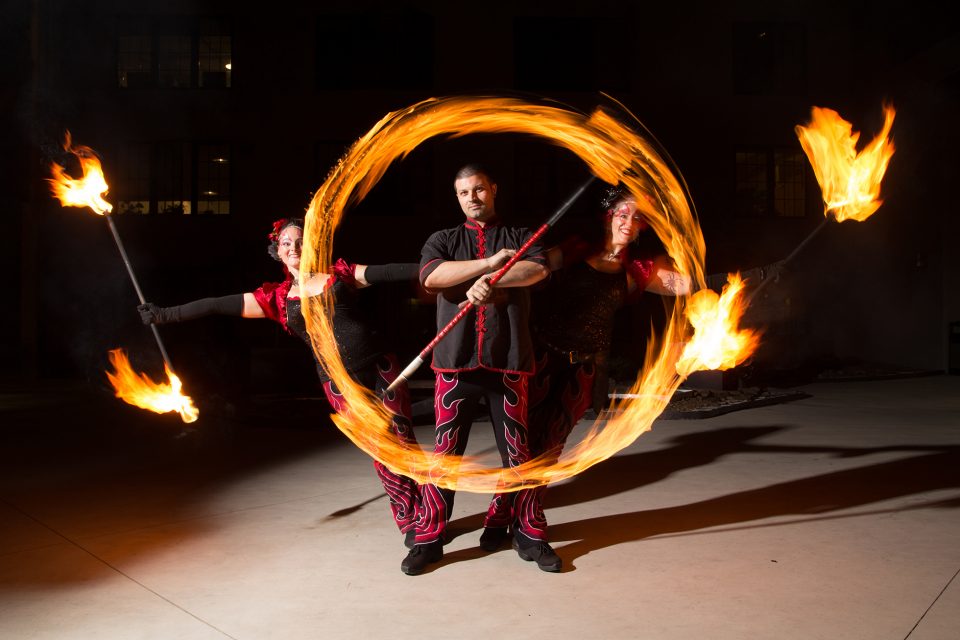 Sacred Fire does all types of events, from small backyard parties to huge affairs. They’re performing at the California State Fair, and this year, they’re also performing at the Oregon State Fair. They perform at Dire World Scare Park in Roseville, Six Flags Marine World and a few local festivals. On Aug. 12, 2017, you can catch them at their self-produced Annual Fire Spectacular in Land Park, celebrating its 10th anniversary.

That’s a lot of teaching, event coordination and performing, so at this point, this is Sequoia’s full-time job. “I’ve got to admit, it is a lot. How do I juggle it all? I am learning to juggle, quite literally. I’m getting better at it. It’s getting to the point where I’ll definitely need a helper. It’s getting to be a lot, and challenging my abilities in time management, and self care and the whole thing,” she admits.

What somebody’s requesting for their event dictates what performances they bring to the table. Sacred Fire is more than just fire dancing. Their performers often study more than one type of dance or performance art, and LED dancing, belly dancing, aerialists, stilt walking and hoop dancing are just some of the skills in their quiver.

But fire is not simply their main attraction, it is sacred.

“Fire opens us up to who we are at the core of our being and puts us in touch with our authentic selves and allows us to internally align and become whole,” Sequoia says. “We’ve fragmented ourselves in many different ways and when we tap into the core of who we are, we become embodied. When we’re aligned within ourselves, it allows us to align with others into social coherency.” 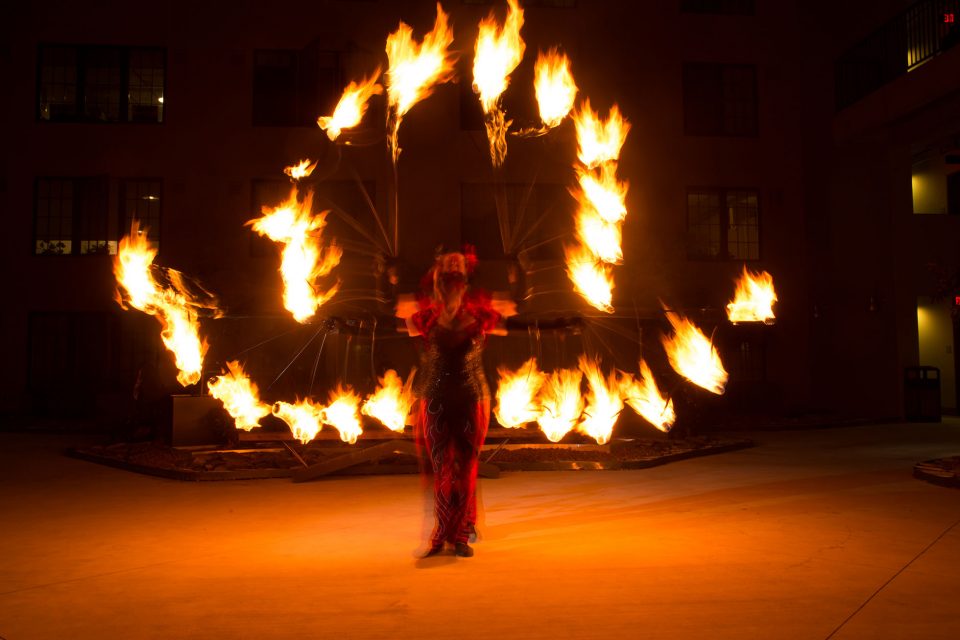 Sacred Fire’s upcoming all ages 10th Annual Fire Spectacular is quite literally Sacramento’s hottest festival of the year and takes place at William A. Carroll Amphitheatre (across from Fairy Tale Town) on Aug. 12, 2017, beginning at 3 p.m. with workshops. The main event goes down from 6 – 10 p.m. Tickets are available online and should be bought in advance as the event is expected to sell out. Pack a flashlight for evening and sunscreen for daytime. To purchase tickets, go to Facebook.com/sacredfire888 or Sacredfiredance.com.