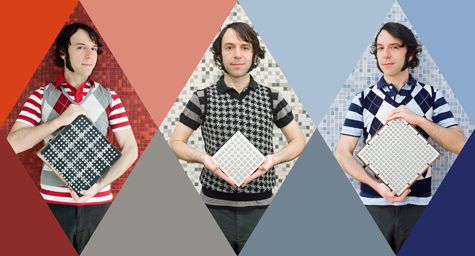 The dandy garb of Alfred Darlington suggests he’s a man lost in the past. His digital instrument, the Monome is a brilliant future trapped in the neon glow of a push-button box. Far from an eye-grabbing gimmick, Darlington is expressing himself beyond the DJ booth of electronic music, which in his opinion will combat banality and the demise of electronic genres of the past.

Darlington is resistant to the label of elder statesmen, but with over a decade of experience in electronic music, he’s seen enough sub-genres come and go to speak eloquently on what it takes to sustain. To him, it’s a presence of personality, which is a glaring separation between the Los Angeles beat music he helped cultivate at Low End Theory and with dub-step. “When [dub-step is] good the bass is really pushing air on your organs, and yet it isn’t about the person expressing it,” he said. “There’s very little energy on stage. It’s usually a very controlled amount of chaos that I think will limit that scene, much like what happened to drum ‘n’ bass. There’s amazing parts of the sound, but personality is hard to come by. Whereas this beat thing, people are really willing to, for lack of a better term, let their freak flag fly–that’s a terrible phrase. But there’s something to it.”

On stage Darlington is Daedelus. He began DJing for Dublab.com in 1999 and by the early Aughts was releasing albums on Plug Research, Mush and Ninja Tune. Much like the mythological Greek character Daedalus, Arlington is a tinkerer and lover of invention. His experimental music caught the attention of Brian Crabtree and Peter Siegerstrong, two developers of the Monome box, which is a sampler imbued with the freedom of improvisation. Through the use of the Monome, Darlington is fossilizing the notion that live electronic music must be static and built on pre-existing recordings. His weapon of choice was our first topic, as I attempted to understand its power.

How did you get connected with Crabtree and Siegerstrong to obtain a prototype of the Monome?
It was really quite accidental; a lot of my career has been a series of happy happenstance accidents. They invited me to play a gig a long time ago when they were undergrads in San Diego. They showed me the prototype, and it fulfilled all my wildest dreams for sample manipulation. Then there was a lot of begging, pleading, bribing and coercing until I got the device in my possession.

It’s funny to think we live in such a wonderful age of invention for young music makers. All the buttons we want to press are out there on some device you can obtain. When I was coming up in the early Aughts this wasn’t possible. Either you got an MPC and did all the weird things like use zip discs to load samples, enduring painful breaks while you waited for the sample to load–five minutes of waiting around. Or you would use the computer and get computer face with the blue screen projected on your eyes and you’d be dead to the world in your bedroom.

Is it a device that made sense immediately? Or did it take hours of fiddling to even get a basic feel for the Monome? Because it looks like a complex piece of machinery, given all the buttons.
There was some stuff to the guts that were complicated initially. What’s cool about it is it’s a very open platform. We’ve added a lot of functionality and play validity, I guess. But the device itself never needed to change because it’s button matrix. The initial idea of sample manipulation was there and it gets more refined as people engage it as an instrument.

It’s funny because at first my imagination tricked me into thinking I could manipulate samples on this, but I’d still need a keyboard to play them. That’s not the case. The potential energy of the instrument was great enough that it’s continued to move forward.

Do you still get a lot of people who are moths to your button machine? Or have they gotten used to its presence and are dancing again?
In 2010 there’s been a sea change. A general shift has occurred and people are used to instruments on stage again. It’s OK. There’s still some of the staring types, but not as many. I think people are kind of getting the idea that electronic music can be live, and it isn’t a matter of life and death that they just stand there.

Have you been following the Anti-Rave Act that is currently passing through legislature?
Yeah, I played at EDC [Electric Daisy Carnival], which is one of the fermentors for the recent spat of anti-rave talk. For a show that was markedly safe with over 200,000 people over two days, which for a non-festival is the single biggest event in America in the past couple years, there was a death of an underage kid there. That began this moral wrestling because it was partially the city of Los Angeles’ fault. There was a lot of controversy, since they were supposed to be carding.

It’s funny because at any given moment people are living their lives outside of a controlled situation, such as a rave or event. I’m sure there are, unfortunately, multiple deaths of teenagers from drinking or drugs on any given night, but they are not all concentrated in one space. With EDC especially, there were paramedics on hand a lot of people being helped and saved, but it’s easy to point a finger.

It’s always been this way. As much as I love the attention given to the scene and the opportunity for young artists to play in front of large audiences, every time the electronic music scene goes underground it tends to bear more fruit. I guess that’s a small piece of solace I’m trying to derive from this negative attention.

How did you feel when you read the phrase “pre-recorded music” as the musical format that this act intends to criminalize? I’m still baffled as to how this definition could be monitored and policed.
At sporting events I’m sure they’re playing pre-recorded music for sleazy cheerleaders. I’m sure people are dying on the field and off, and yet I don’t see them banning those games.

I’ve read that you’ve become an elder in the L.A. music scene, someone who’s even sought out for advice. That has to be a strange transition considering in your younger days. You were treated somewhat like an outsider.
It’s one of those things where when I was growing up I was really enamored for a lot of the new sounds, and for the drum ‘n’ bass scene in general, but it wasn’t for me in the end. It’s a gift that I wasn’t allowed in, because there’s not a lot of those people around right now. Sounds change and being forced to be on my own was beneficial at that time.

By propagating a sound forward there are a lot of likeminded people that have cropped up. I don’t take any responsibility for their music, but I do feel wonderfully inclined toward people like Flying Lotus and Baths. These are people whose weirdo energies can all be combined to make a sort of Power Ranger of Doom.

I don’t know about the elder statesmen thing. I don’t think a lot of what I’ve gone through is represented by what we’re currently in. I had the wonderful benefit of being around when Myspace was influential for instance. I got featured on Myspace and it seemed to make all the difference in the world. In a single day I had 150,000 listens on my tracks. These huge waves are just not there anymore. Facebook doesn’t feature musicians in the same way. In a lot of ways those experiences can’t be propagated. I think the idea of not being bitter is the biggest lesson I’ve learned.

Can we expect dandy garb during your Sacramento performance?
I might have a bit of a tan from a large Southeast Asia tour, so I won’t look appropriately Victorian dandy as far as paleness goes. There are two aspects of it. I like the Victorian dandies and presenting it out of sorts in California. Also by being dressed up on stage, it frees people from their banality, hopefully. They don’t have to worry about someone wearing stupid Kanye West slatted shades and bouncing up and down ridiculously. It hopefully allows people to get into a different headspace.

Your next record on Ninja Tune will be called Bespoke. How far along are you?
It’s done. It’s just artwork that is getting completed. I’m getting ready to begin a big 2011 push for the record.

I’m picking up on a correlation between your retro-fitted clothes and customizing one’s style playing a role in the concept of the record.
It’s definitely bringing it all home. All of these concepts I’ve been propagating for a while now, it’s time to bring them all back. I wanted to do a record that was about combinations. I have a lot of guest vocalists. In a very altruistic way I want the record to be about creating your own reality, customizing your environment to your needs, rather than letting it be banal. I think banality is our worst enemy. Boredom is our worst enemy–the kind of thing that causes people to become punks and other unfortunate subcultures. There’s nothing wrong with being a punk; trust me, I spent my time, but I’m not a big fan of nihilism. We create our own structures and for me it begins with bespoke clothing. People used to hand-make everything for instance, now nothing is made by one person, except for music and the arts. Why not embrace that, push it forward, as opposed to having it be a secret?

See Daedelus and his fascinating Monome as part of the Sacramento Electronic Music Festival on Thursday Jan. 27, 2011 at Townhouse.