Since its opening in February 1921, a wealth of artists has performed within the grandiose bowels of Sacramento’s Memorial Auditorium, including the Rolling Stones, Beach Boys, Duran Duran and Melissa Etheridge. It was the auditorium’s grandeur and antiquity that convinced the semi-local women’s clothing designer Tiana Vega that the annual Designing Dreams fashion show should also take place there.

“For some reason, walking in there feels like you’re walking into New York,” Vega told Submerge over the phone from her hometown in Jackson, Calif. “I’ve never been to New York, but that’s what it would look like if you were walking into an old, established building in New York.”

Not to mention that last year’s premiere event was the first fashion show at the auditorium since the showcase of Coco Chanel’s collection in the ‘50s, according to Vega.

This marks the second year of Designing Dreams, an event dreamt up collaboratively by Vega and Jennifer Richards, CEO of the Sweet Dreams Foundation. The show will feature the work of 11 designers from both Sacramento and San Francisco, including Vega’s, complete with 120 models walking the 90-foot runway. 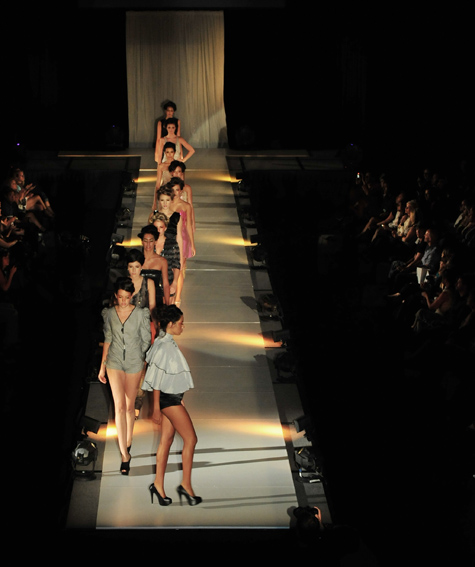 Beyond a fashion show, Designing Dreams is a charity event. The proceeds from the evening will go toward one of the foundation’s bedroom-designing projects. The foundation’s mission is to design “dream” bedrooms for children who suffer from life-threatening diseases in order to aid their healing processes. Thirteen-year-old Cassidy, a Folsom resident who was diagnosed with a malignant brain tumor in January last year, will be granted her dream bedroom using this year’s proceeds.

Last year the event raised enough money to successfully create a dream bedroom for 8-year-old Aimee, who suffers from severe sensitivity to ultra-violet radiation. The project’s goal was to essentially bring the outdoors to her playroom.

In the past Vega has been hesitant to organize fashion shows, especially because so many designers hold them regularly here in Sacramento. Building awareness for a line is understandable, she said, but in Los Angeles designers are focused more on selling their clothing in boutiques.

“So that’s why when I decided to do Designing Dreams I wanted to make sure it was a first-class event and have the buyers there and basically do it right,” Vega said.

This includes making sure the event gains widespread attention.

“You spend a lot of money and a lot of time doing all these outfits, and what’s the point of doing them if you’re not getting the right people to look at your stuff?” Vega said.

Still, she has participated in many events, and her work has been showcased the past two years in Sacramento’s Fashion Week. But Vega makes it a point to participate in charity events, like the Giveback Gala Fashion Show she was a part of this past April.

“I’d rather do shows where basically I’m all for the cause,” Vega said.

While in pursuit of a charity to collaborate with for a trunk show several years ago, Vega discovered Richards at one of the Sweet Dreams events and felt an immediate connection to her cause.

“Working with someone who loves absolutely what they’re doing and every minute of it and not making any money off of it, that’s very inspiring,” Vega said.

The two young designers decided to collaborate and quickly realized that their vision was bigger than a trunk show, so they decided to put on a fashion show instead.

As Vega sees it, she and Richards share a passion for designing the dreams of others, one through fashion and the other through interior design; hence the name Designing Dreams.

Vega’s own fascination with design began at an early age, starting with her childhood days tinkering with dolls and sewing their clothes. Her intrigue with fashion grew throughout her days at Argonaut High School in Jackson, peaking when she was a sophomore interning at a law firm. 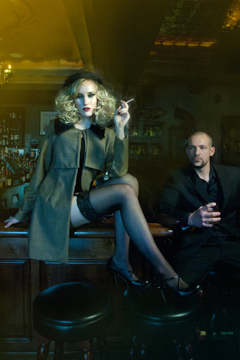 “I was finding myself sketching more than anything and having more fun dressing up to go to work than actually being there and taking care of the stuff I had to do,” Vega said.

After high school she relocated to Los Angeles to attend the Fashion Institute of Design and Merchandising, where she learned draping techniques, how to make patterns and how to sew.

Shortly before graduating with her degree in fashion design in 2008 she met Dave Icarangal, who would eventually become the cofounder of her contemporary clothing design venture. The two reconnected when she moved back to Northern California.

For the past two years she has been living back home in Jackson, selling her custom pieces online. However, the designer plans to return to Los Angeles in the near future, where she anticipates a better market to sell her collections.

Though she expresses admiration for the extravagant, over-the-top creations of designers Betsey Johnson and Monique Lhuillier, Vega does not look to others for inspiration. Rather, her inspiration stems from timeless, elegant looks of eras long past, especially those of the ‘30s and ‘40s. 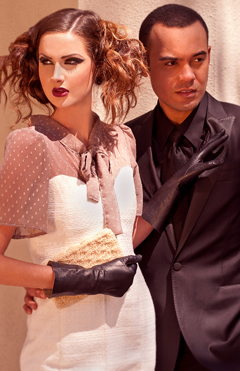 “Honestly, I try to break out of my shell and do something crazy, like Lady Gaga-ish, but I can’t do it,” Vega said. “I always end up going back to something classic and tailored.”

Vega’s work is feminine and chic, intricate collections that usually take the artist two to three months to produce. Her fall/winter 2012 collection, the Margaret Mary collection she fashioned in remembrance of her grandmother, includes fitted, tight-fitting dresses with flattering necklines, or boxy cropped jackets consisting primarily of solid colors. Her collections have included bridal pieces, formal gowns and custom wear.

A scene in a video for which she was a stylist inspired the 2012 spring/summer collection that will be featured in this year’s show. The scene was of a croquet match, so the clothing has a sort of Hamptons feel with a preppy vibe, she said.

The collections featured will cross a spectrum of looks for both men and women, ranging from ‘50s-inspired, classic pieces by Cardenas, to the surprising and chic looks of Aya Yoruha, Vega said.
Even over the phone, the designer’s excitement was apparent.

“We have a great lineup,” Vega said. “I am so excited, I am trying to slow down.”

And, as if the show of massive proportions wasn’t enough, organizers have confirmed that the runway show will open and close with performances by the Sacramento Opera. A grand night for a great cause.