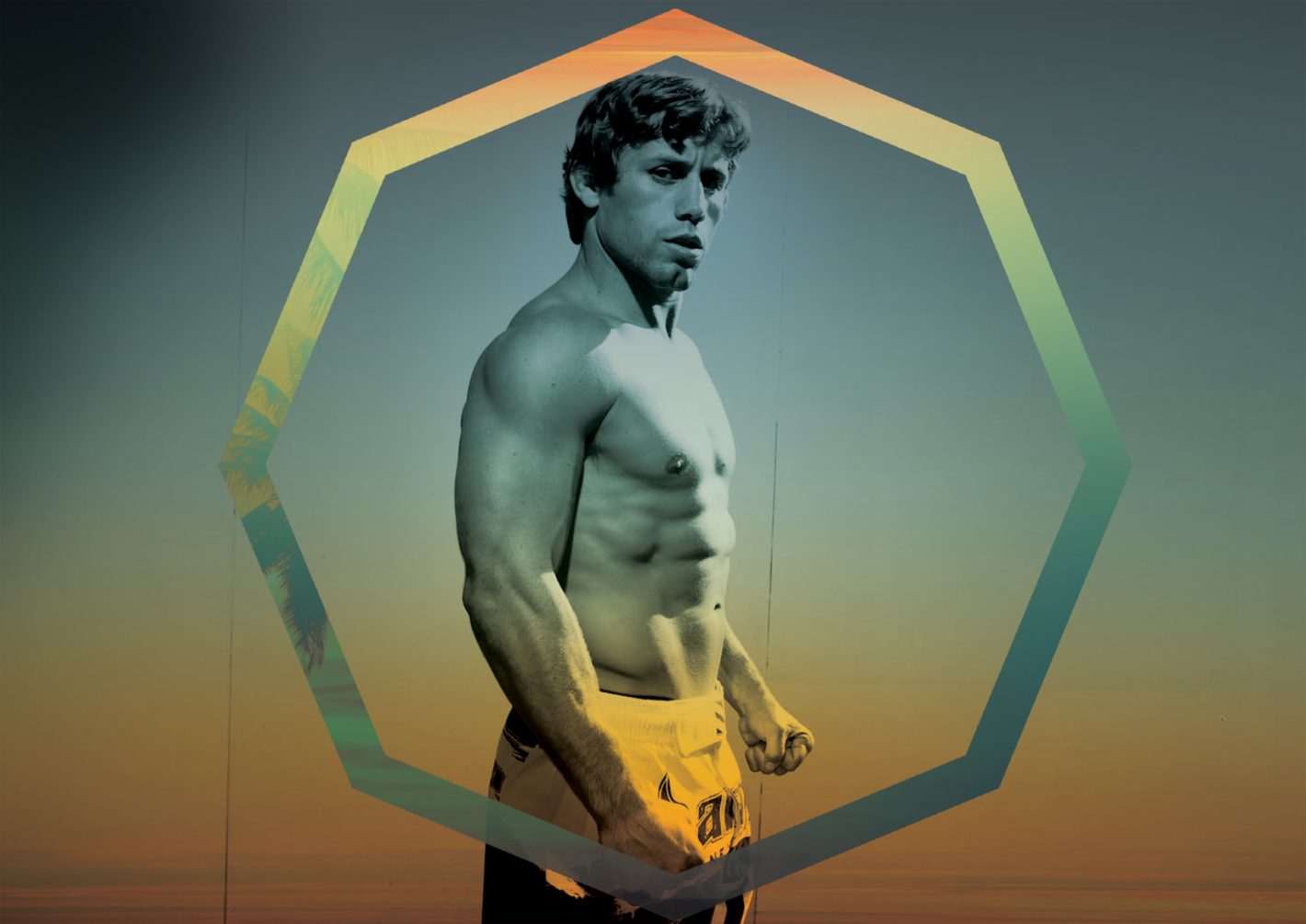 On Dec. 17, 2016, Golden 1 Center is hosting UFC Fight Night Vanzant vs. Waterson, but the bout of the evening is surely the final match of Sacramento mixed martial arts legend, Urijah Faber.

With a career spanning 13 years from the infancy of the sport to what has now become one of the most popular live sporting events on pay-per-view, Faber, dubbed “The California Kid,” will be saying goodbye in what’s sure to be an emotion-filled party for all in attendance.

After Faber closes this chapter, he’ll be devoting his energies to his gym, Urijah Faber Ultimate Fitness, which moves from its downtown location with just five parking spaces to a giant new facility on 6700 Folsom Blvd. that can easily fit many times that amount.

I sat down with Faber in the lobby of his still under construction gym, and we talked about the big night, his legacy and his love of Sacramento, but in the middle of it all, we got interrupted by an exuberant bus driver who barged into the gym lobby, excited to see Faber, shouting, “What’s up, man? You know my man Blake the Beast! That’s my boy, he’s a cool cat!”

Faber returned a giant smile, shook his hand and made the guy feel welcome and special. He tells me that kind of stuff happens all the time.

“Yesterday, I went for a run and everyone was shouting ‘Hey!’ I felt like I was in a Rocky movie,” he says with a grin. “Seeing all of the Sacramento folks get a rise out of someone that’s representing them, is really cool.”

Is it hard to say “farewell match”?
It is. You don’t know what it’s going to feel like until you decide to do it. As a guy who’s been in this sport for 13 years now and always gunning for that title, when you have a fight that’s not for the bigger picture, it’s kind of weird to think about. I’m just getting in and doing my homework and getting ready to have the performance of my lifetime. I’m doing it in a place that’s really cool, and I know is going to invoke a lot of emotion. It’s a monumental thing for me, and what better place than my hometown where I’ve tried to make a name and represent myself in the new arena.

That’s an X-factor with this match that you’ve not had to face before. You’ve got this poetry, finality and all of this extra emotion that you’ve never had to bring into the ring before. What’s it like having that in addition to delivering a good match?
There’s always been these situations that I’ve been in with big fights—my first pay-per-view fight for World Extreme Cagefighting against José Aldo, the first title fight in the weight class in UFC against Dominick Cruz, jumping up and fighting a guy in The Philippines—there’s always a bigger picture. People are always asking, “What is it like?” and for me it’s the same. It’s me as a human being fighting another guy who’s a human being, and there’s a lot more on the line than money and respect. It’s health, and pride, and things like that. I’m preparing like I always have and I plan on performing like I always have with my best foot forward and leaving it all on the line.

So it’s 10 minutes before you get in the ring. What’s going through your head at that point?
Actually, the strangest moment for me in a fight experience is right when they call you from the locker room before you walk out. You’re backstage in the arena, and it’s quiet and you’re there with a couple of your teammates that are in your corner. You’re not ready to fight until they say “you’re up!” and you’re not experiencing the crowd, the energy, and everything else until they start playing your music. So there’s about a five minute period where it’s like crickets. It’s quiet and unique and it’s always an awkward time. Then as soon as that music hits, that’s the closest I’m going to get to being a rock star. Everybody’s yelling at me. Everybody’s eyes are on me. Then once you’re in the octagon, it’s just about you and the other guy. There’s such a cool array of things that happen in that 10-minute period. You’re visualizing your offense. Then there’s this quiet, weird time when you’re about to walk out to battle. Then the walk into the cage is an exciting time. Then there’s the actual moments before the fight when you just focus on this guy that’s across the ring from you.

You go from having your name announced and this ridiculous pop that you only see in movies, to starting the fight so quickly. How do you make that transition?
It’s just gonna happen. There’s nothing you can do about it. You just gotta live in the moment. Today I fought six rounds and that fight will be three rounds. So you just go back to what you do every day. As a mixed martial artist I’ve done this for 13 and a half years, and before that as a combat wrestling athlete since I was 12 or 13 years old. It’s a very familiar thing and it stems from the self confidence that nobody can beat you up. You always go back to that and making it happen is up to you.

If your 12-year-old self could get a glimpse into the future and see what this is all coming to today, what do you think he’d say? What do you think about this journey?
It’s pretty incredible. That just gave me goosebumps just thinking about that. First off I would have thought that I was going to be bigger! [Laughs.]

Physically?
Yeah. I’ve always been in the limelight. When I was a kid I used to do commercials, plays and acting. When I was in high school I was in the newspaper, and in college I was on posters for the athletics. Things got more intense and bigger and bigger, so I’m used to it. But I couldn’t have guessed it or planned it out. I don’t think I would have been that surprised if someone would have told me. Those are my passions. My favorite movies growing up were martial arts films and my favorite sports were hockey, football and wrestling, so I’ve always been a combat type of dude and my passions have been around this sport.

The early UFC fights were a lot different, like Thunderdome.
It was a crazy experience. I loved it. So for me seeing this sport progress as it has is pretty cool.

The funny thing is that 1994 is when they had the first UFC fight, there was no weight classes and hardly any rules. You could hit guys in the balls. You could pull hair. You had sumos fighting little dorky karate guys. It was really a whole different animal.

What’s a memorable highlight that really sticks out in your career?
The Jens Pulver fight, which was a big one here in Sac, which was the first time I fought at Arco Arena. He was a former UFC Champion. He was a guy who had beat BJ Penn, the first champion in that weight division, and a guy I really respected a lot. We had a great five-round war in my hometown on national television.

I fought a guy who was a grizzled vet named David Velasquez. I was fighting in an Indian casino. He had a missing tooth and was talking a bunch of crap to me before the fight. I was just a clean-cut kid out of college and it was my first fight in a casino. It was illegal in California and I was just getting paid a couple hundred bucks and a cut of the tickets. I got kicked in the face and I beat the crap out of the guy, but I took some hard knocks and had a great time. It was the early years of the fight game and everything about it was gritty.

Why are you ready to end it? What made you decide this is the right time?
I’ve been top five in the world for the entire 13 years of my career. I feel like my skill set is still right there. I feel like my body and mind is right there where it needs to be. The excitement level is not quite what it used to be. I still enjoy it but it’s not the highs and lows that got me into this thing. It’s really hard to walk away because it’s an easy way to make a buck.

For me, it’s going out when my skill set, body, and mind is where it needs to be and I have a lot of passions that I’m focusing on in different directions. I think it’s time to dedicate a bit more time to the next phase of what I’m doing.

Having the adrenaline rush of 10,000 people cheering at you is hard to get back when you’re done. What do you do after this?
I don’t know. I’ll be helping the next generation grow. You don’t get into this sport to get into that situation, it’s just a bonus. It wasn’t the reason I got into it, but it’s definitely an inspiring and cool experience.

Urijah Faber’s Ultimate Fitness’ new location in East Sac has a planned opening date of Jan. 1, 2017, just in time for you to battle your holiday food baby. For more info, go to Ultimatefitness.pro. You can see his final fight on Dec. 17, 2016, at the Golden 1 Center at UFC Fight Night. The main event will feature Michelle Waterson facing off against another Sacramento-based fighter, Paige VanZant. Tickets start at $75 and can be purchased through Golden1center.com.