HOME OF THE BRAVE: Zach Liptak and Excursion Always Will Push You Over the Edge 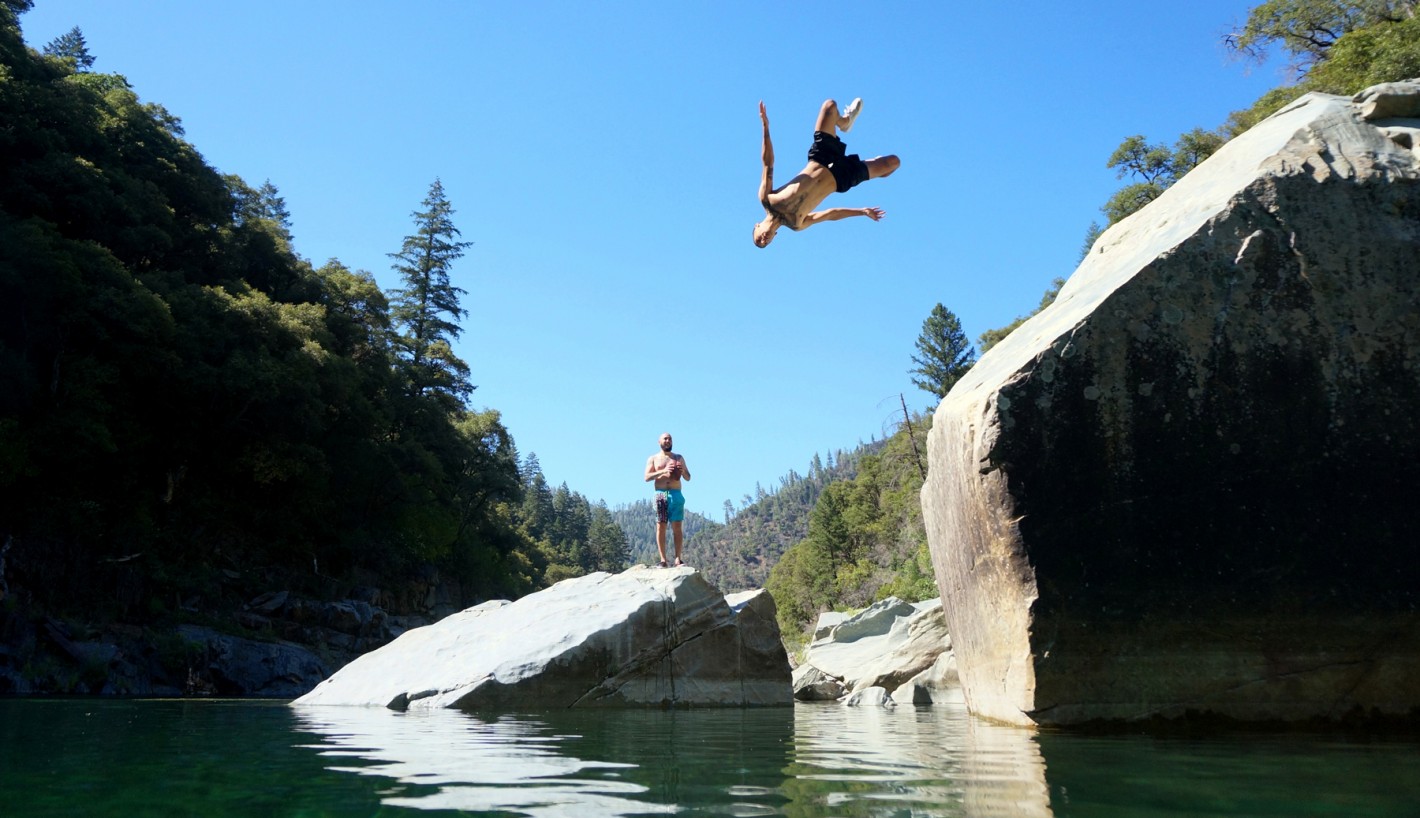 If your friend jumped off a cliff, would you do it, too? When it comes to Zach Liptak, YES, yes I would. Because in Liptak’s case, he’s jumping off a cliff that has met a number of stringent requirements.

Firstly, said cliff towers over a body of water that’s plenty deep to absorb your fall. Secondly, it has some level of remoteness surrounding it—some hiking is required, and thus, it isn’t riddled with wasted “woo” girls and grab-y d-bags. And finally, it is surrounded by sublime beauty.

Liptak, environmental planner by trade, is the leader of Excursion Always. This is an open-to-anyone group of friends who hike, swim and explore. But the most alluring thing about Excursion Always—the fascination—is in that some of these friends, old and new, also bravely dive from dizzying heights into perfectly picturesque pools. And then post on Instagram these insane photos of idyllic water features, juxtaposed with graceful and anticipatory bodies aloft many dozens of feet above the surface. Your eyes pop out of your head as you think to yourself, “Would I jump, too?”

Whether or not you’re ready to take the plunge, you’re more than welcome to drink in the scenery and enjoy the excursion. Always.

A member of another local hiking club, I recently decided to join up with Excursion Always after eyeballing their beckoning social media feeds for much time. The destination? Royal Gorge, in Soda Springs. The trip promised to be a short but challenging hike, leading to rewarding and awe-inspiring swimming holes. Being an experienced hiker with a family that was hot as balls, tired of the usual and in need of a weekend of some leisurely swimming and some kind of outlier adventure, I eagerly set out with my crew to meet some new folks and indulge my kids in an unforgettable Fourth of July weekend getaway. 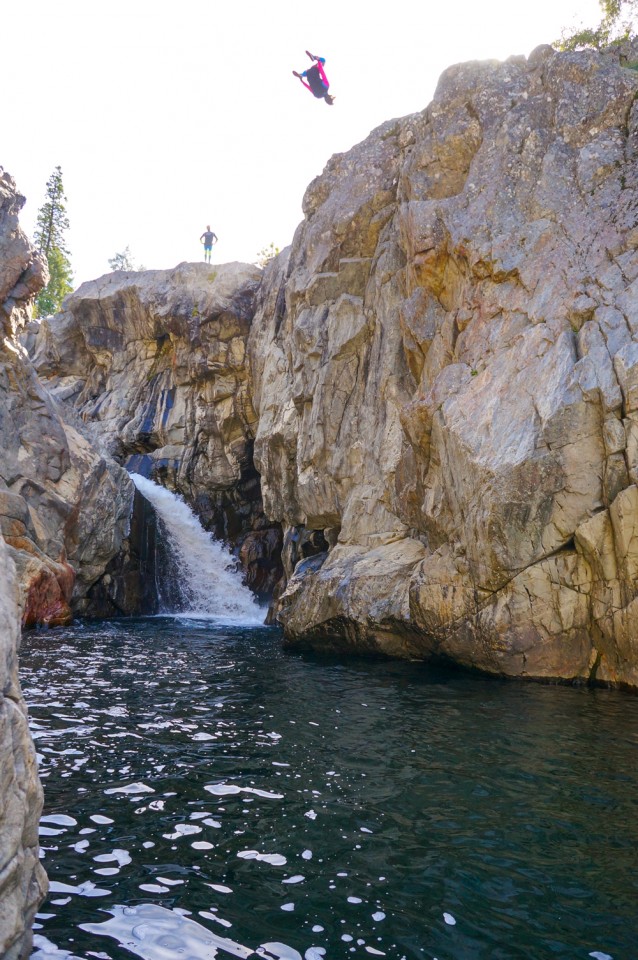 It was royal. It was gorge-ous. There was some roping in, a few tears, a terrifying rattlesnake encounter … but in the end, my kids have stars in their eyes when we talk about that trip, and I was left with an overall impression that this group, Excursion Always, was inclusive and fun to be around as they are adventurous and daring.

Here’s what lifetime Sacramentan Zach Liptak has to say for himself, and this crazy, cool thing he has founded and grown. I mean, there must have been 40 other people on the trip that I went on with Excursion Always—and as a member of a summit-focused hiking club, I know firsthand that that’s a lot of people for one outing.

So what’s the appeal? Maybe the appeal is just as elemental as that which we came from … 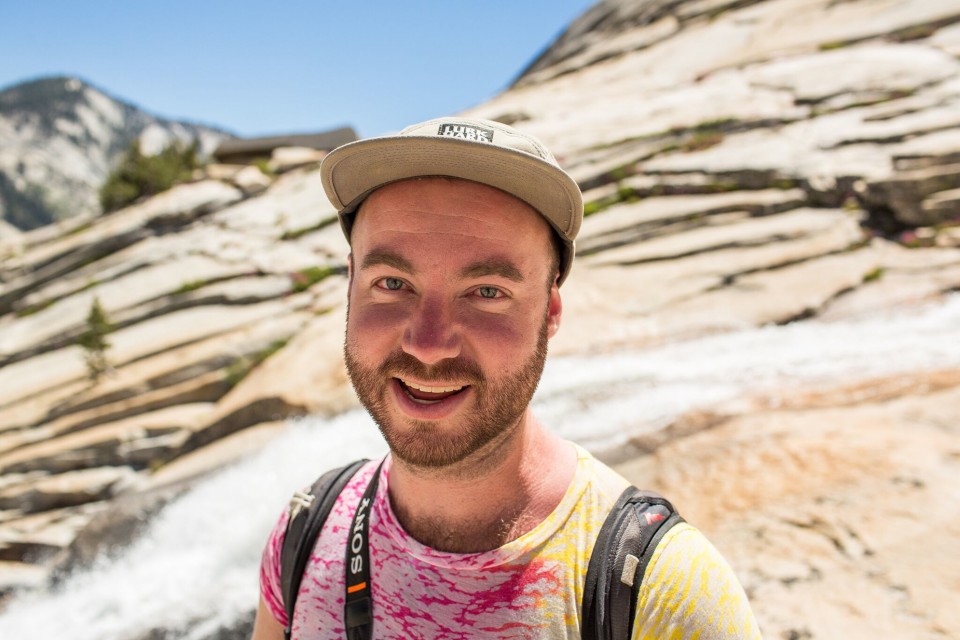 What drew you to cliff jumping and exploring water features initially?
I grew up camping with my family, usually at a lake or near somewhere for my family to fish. I often found myself rock hopping up the creeks and rivers and would occasionally find small … swimming holes or natural waterslides. As I grew older, I started exploring more, and eventually found an amazing group of cliff jumping friends that love exploring and finding new swimming holes, especially those with cliffs that no one has ever seen before.

What led you to start organizing trips?
I’ve always organized trips for friends, so naturally, when I started venturing outdoors more, I started organizing trips for all my friends in the region. I started a collective called Excursion Always, based on the idea of continuously exploring and finding new swimming holes, cliffs to jump and hot springs. We also often join our friends in the Southern California collective, Los Angeles Swimmin. Together, our cliff jumping group has now grown to encompass most of California, with other factions of cliff jumping groups occasionally joining us from all over the United States, including New England and Hawaii most recently on our trip to Havasupai in Arizona.

What are some of the best trips you’ve organized and why?
Last summer, Excursion Always helped organize a nine-day tour of Northern California swimming holes for our friends in Los Angeles Swimming where we went to all of the major cliff jumping spots within two to three hours of Sacramento. This trip really solidified our friendships, and our dedication to continually be pushing ourselves to send bigger cliffs and explore more remote and untouched parts of the State.

On Halloween, I organized a trip to a hot spring where we used a generator and projector to watch scary movies from the natural hot tub, which was incredible—to be soaking under the stars, watching The Hills Have Eyes.

And most recently, over the Fourth of July, I organized a cliff jumping trip to the upper reaches of the American River, with about 40 of our group. The highlight of this trip was the entire group screaming “The Star-Spangled Banner” at the top of our lungs, while our friend, Houston Braukman, stood atop a 50-foot cliff. He successfully sent his first double full backflip (720 backflip) at the peak of us finishing the last verse of the song … “the home of the brave.”

How have the trip attendees grown over the years? How many years have you been doing this?
Excursion Always just started in 2014 as two friends, Nate Alexander and myself, wanting to get outdoors more, and to find like-minded people with whom to go outside. Our trips usually average around 20–30 people; however, our last trip peaked at 120 people, from across the United States.

What are some upcoming trips you have in the works?
We have a few that are going to be a lot of fun, but not in the area. At the end of August, our friends in Los Angeles Swimmin will be leading a cliff jumping event in Portland for the Stay Wild Adventure Expo. Also, in September, our cliff jumping friends on the East Coast in Cliff Life Media are hosting an amateur East Versus West cliff jumping event back in Vermont, where we will be going to the finest and biggest cliffs in the state to determine, unofficially, which side of the county the best jumpers live.

Can anyone join?
Yes, anyone is welcome to join us on our trips. It typically involves backpacking on and off-trail with the occasional 4×4 off-roading. Most of us are fairly experienced; however, I have successfully led some people on their first camping trips ever.

Yankee Jim’s Bridge (pictured on top of page):
A historic bridge outside of Colfax over the North Fork of the American River is home to one of the nicest swimming holes in the area. If you walk upstream from the bridge along a small dirt trail, there is a section of large granite boulders that are perfect for flipping off of into the perfect-temperature, emerald green waters of the American. Approximately one hour from Sacramento. 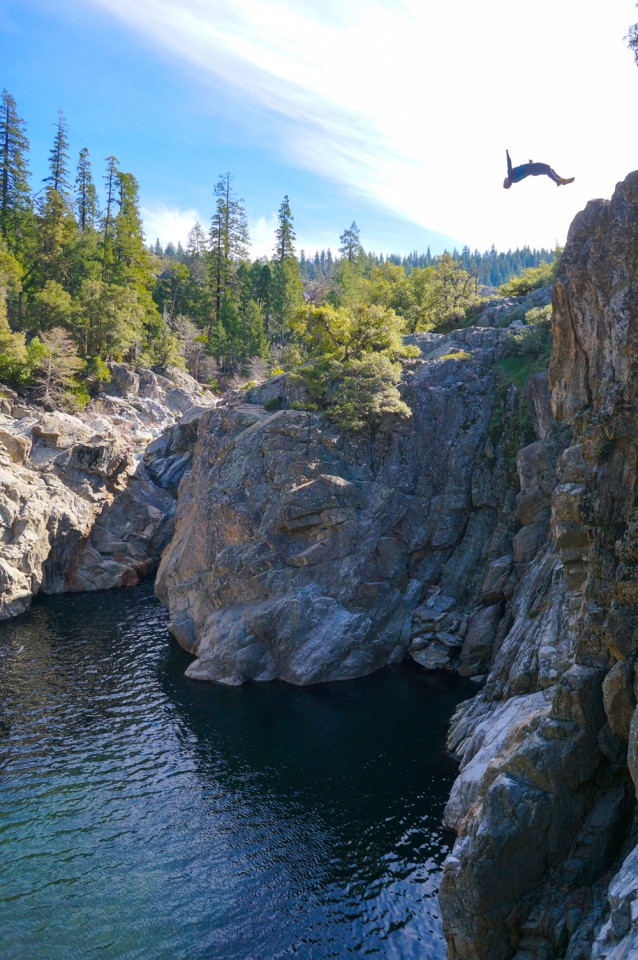 Emerald Pools (pictured above):
A cliff jumper’s paradise located on the South Fork of the Yuba River on the way to Bowman Lake. Monstrous cliffs, including the infamous 68-foot Goliath and a 25-foot waterfall complete this swimming hole. It’s a steep hike down slippery rocks without much a trail, but well worth the scramble. Approximately one and a half hours from Sacramento. 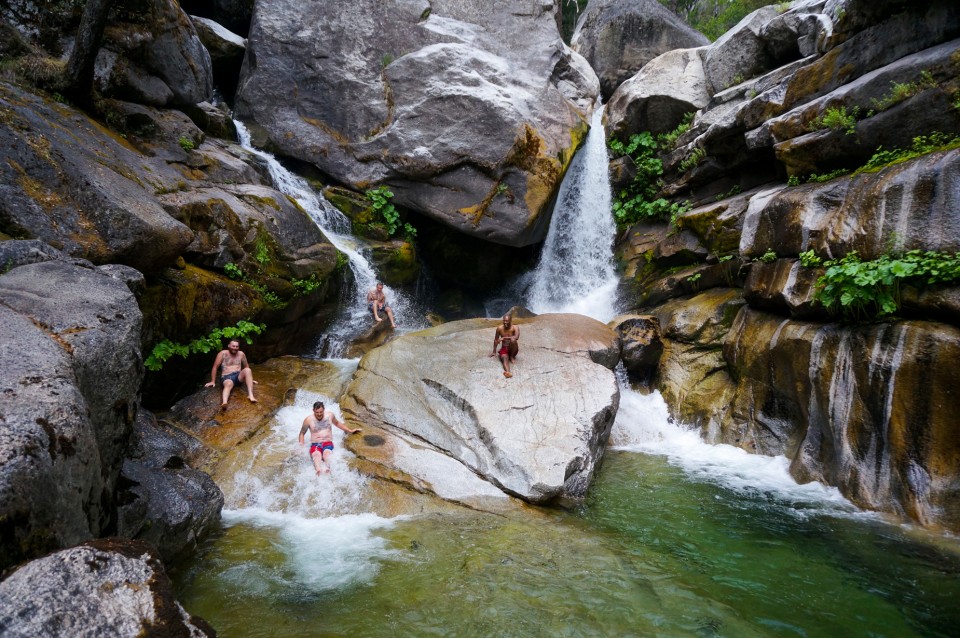 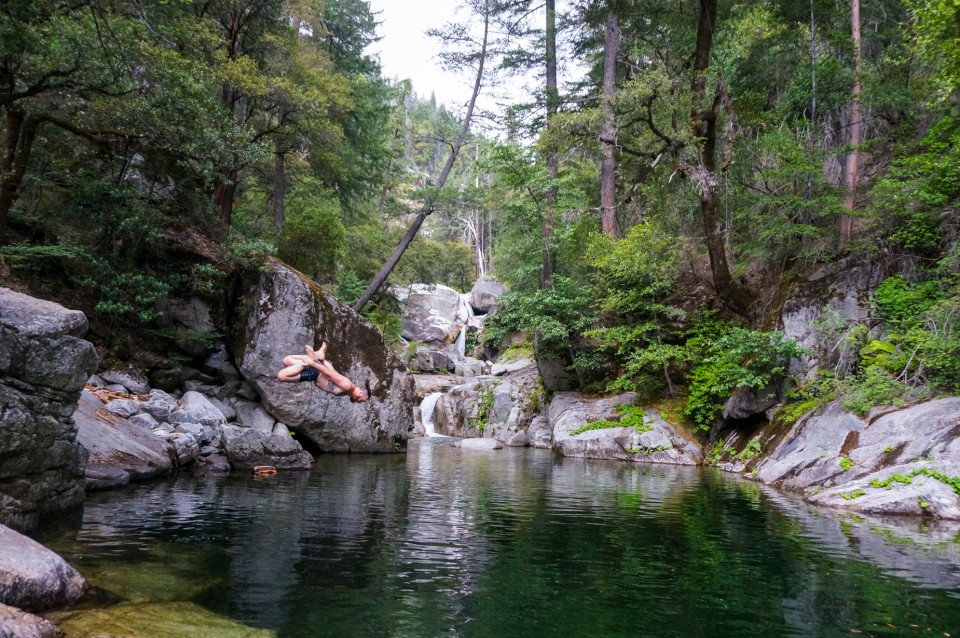 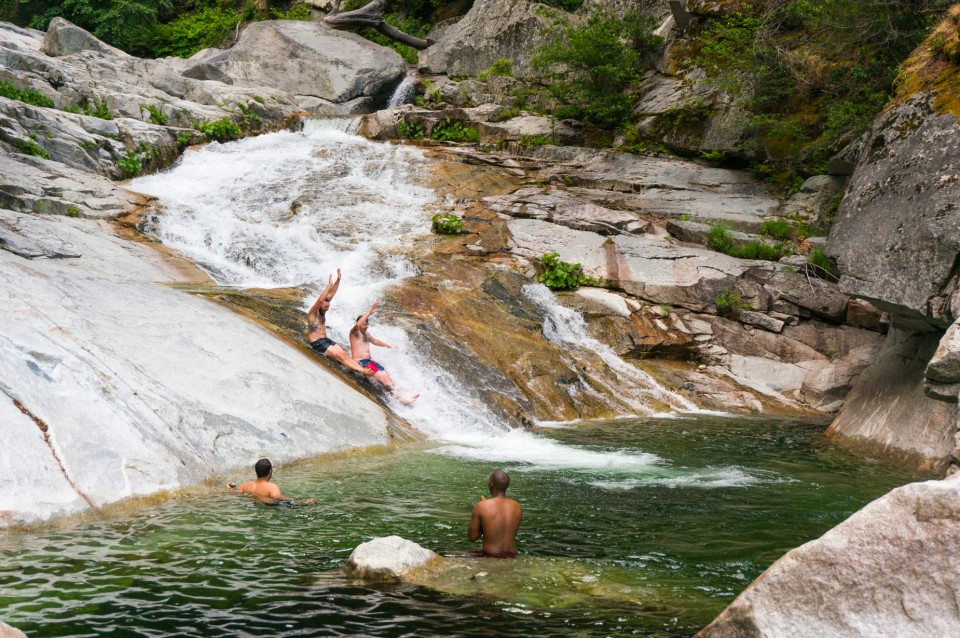 Rock Creek (pictured above):
Outside of Oroville exists an incredible tributary to the Feather River. Right off of Highway 70, this creek has an incredible waterslide, waterfalls that make you feel like you’re in paradise and perfect granite slabs from which you can throw small flips. The Feather River Hot Springs 30 miles up the road complete this destination. Approximately two hours from Sacramento. 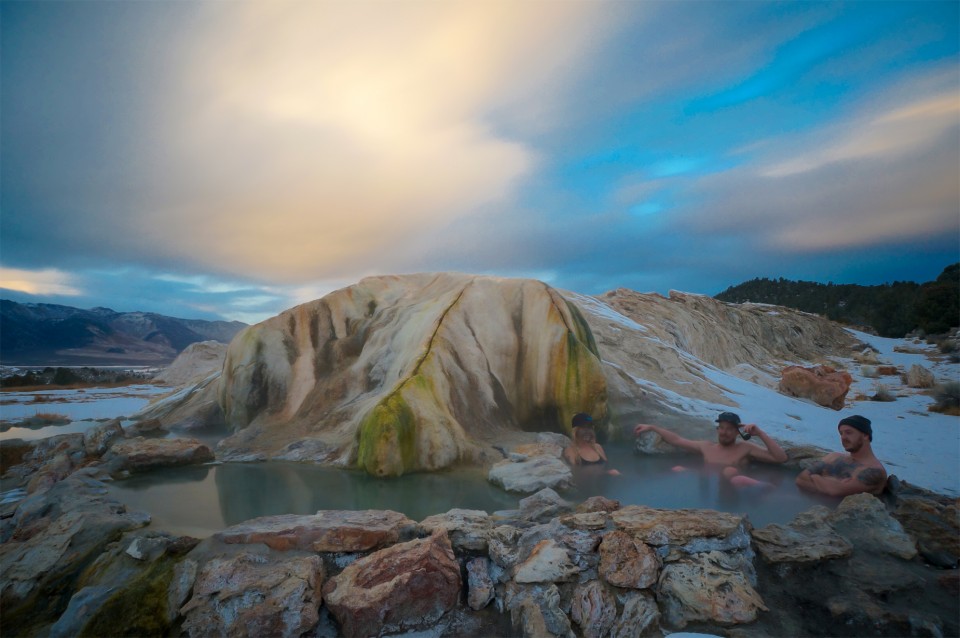 Travertine Hot Springs (pictured above and below):
Right outside of Bridgeport off Highway 395 in the Eastern Sierras is the otherworldly Travertine Hot Springs, which looks like something you would find on Mars. Hot water pours down a spine of travertine to fill multiple pools of varying temperature. The minerals found in the hot water create an incredibly colorful formation hanging over parts of the natural hot tubs. Approximately three hours from Sacramento. 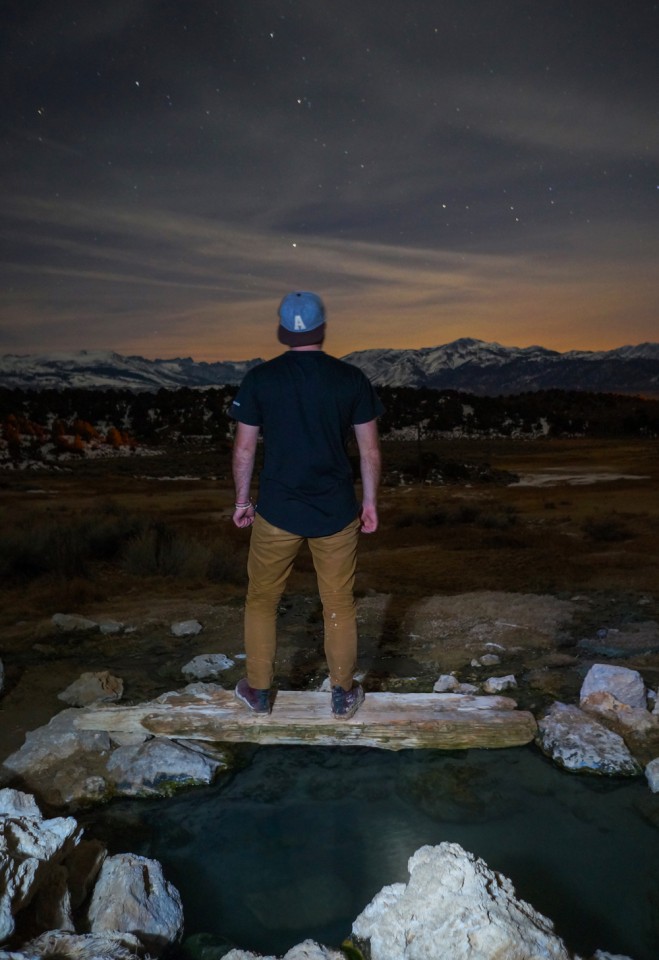 A NOTE FROM LIPTAK:
“Shout out to all the people that have helped make Excursion Always successful, including all of the support from our friends in Los Angeles Swimmin, Local Idiots, Cliff Life Media, Extreme Vertigo, Adrenaline Addition, Telegraph Hiking Club and All Good.”