Rich with history dating back to the 1870s, Old Ironsides, an old-time bar and venue on the corner of 10th and S streets (the location was originally home to a grocery story owned by the Thomas P. Ryan family) celebrates 80 years of business throughout the month of September. Submerge dives into the pages of Old I’s catalogue with help from the Kanelos family, current operators of the business, in addition to longtime employees, musicians and comedians to bring our readers a collection of memories spanning over eight decades. 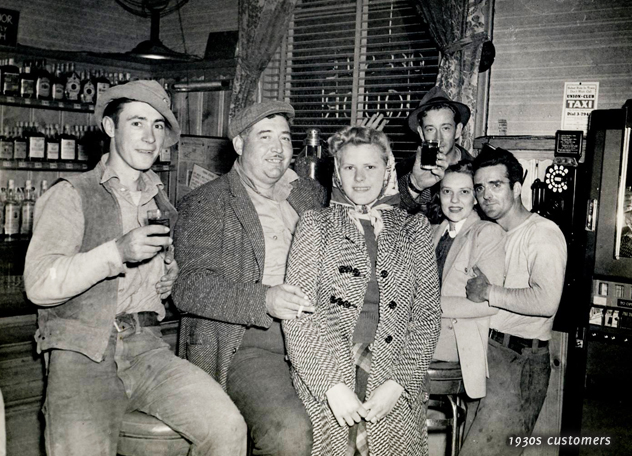 When Old Ironsides first opened its doors in 1934, it was just a bar. Erase the additional room, stage and restrooms from memory and instead, imagine an ordinary wall. What’s left is a small space that inhabits the corner of 10th and S streets that specialized in cold beers and simple cocktails. Still, Old I sailed through a variety of eras and faced its fleet of challenges, only to remain the unsinkable warship after which it’s named.

As the first business in the Sacramento Area to obtain a liquor license after Prohibition, thanks to proprietor William “Bill” Bordisso, this little bar has its trove of tales.

Bill and Lou, brothers, operated the bar with their wives Lena and Sunny during this time.

“When my dad first opened, some of the [neighborhood] ladies would come over with an empty bucket for beer. They would always say it was for their husbands for when they came home, but the thought was that the beer was probably for her because she’d be here in the afternoon for that bucket of beer,” laughs Billee Jean Kanelos, daughter of Bill and Lena.

In the 1940s, Old Ironsides rode the tides into a new era with a fresh art deco aesthetic. Billee Jean’s father remodeled the bar and put in smooth, cushioned booths paired with knee-high, cylinder-shaped tables each with individual mood lighting.

This period of time also marked the grand opening of the bar’s bottle shop and game room, operated by wives Lena and Sunny. The shop was located in the back where the restrooms are today, and sold, well, bottles of booze to politicians, business owners, lobbyists and regulars alike. It thrived until the alcohol industry boomed with bulk sales in grocery stores and warehouse settings.

The game room, with its cozy fireplace and piano, also housed shuffleboard, pinball and claw machines that were ever popular during
the evening hours and also helped keep business sound.

“There used to be back in that time, a bar on every corner from 10th Street all the way as far as you can see,” describes Billee Jean. “There would be a bar on every corner. So, the different bars would challenge each other to shuffleboard tournaments in the ’40s and ’50s.”

Billee Jean and her husband, Sam Kanelos, joined the family business during the ’60s and at the height of cocktail hour, which many of their regular customers indulged in morning, noon and especially after a long day’s work.

With drinks so reasonably priced back in this decade, the term “happy hour” was nonexistent. Whether it was 50 cents for a bourbon and water, or a few more quarters for the popular lunch cocktail (martini), Old I’s bar was never empty.

“In those days, there were a lot of businesses owned by families. So, in the morning at 6 a.m. this bar would be full and they’d be drinking coffee with brandy, beer with a shot, or whatever before they went to work. Twelve o’clock, they were back for lunch for martinis, 5 o’clock they were back until they went home,” explains Billee Jean.

She goes on to describe modern day lunches, usually paired with diet and regular sodas or iced teas. But, she says, in the ’60s and into the ’70s, “it was always liquor and beer when they came in for lunch.”

“We used to have a long, acrylic trough filled with ice with these little carafe glasses,” she describes. “[The bartenders] lined it up with martinis because they couldn’t make them fast enough when the people came into lunch and, not just one martini, but at least two and many times, three.” 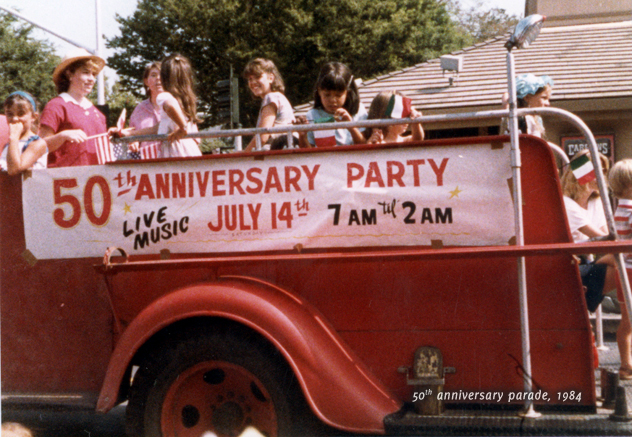 By this time, Old Ironsides had been open for 50 years. The bottle shop was still around, although sales suffered with the changing of times, and the kitchen still served hot lunches, such as spaghetti and meatballs or short ribs, to hungry patrons.

“It’s wonderful to believe it actually happened. You have to look back and say, ‘How did we do it?’” asks Billee Jean. “We went through periods where the lunches went down, so we had to make changes, the bottle shop business went down, and thank God through these years we made the right changes.”

The family has worked together in the kitchen, bottle shop and bar throughout the years to ensure the business’s continued success, but both Billee Jean and daughter, Kim Kanelos, also credit having long-term employees that aided in keeping Old Ironsides above water.

Like Art Rodriguez, who’s been with Old I for 30 years. He started in the bottle shop while he was attending Sacramento State University on a scholarship. In the ’80s, the family hired students who needed to make a few extra bucks through the college’s athletics program and these student employees would work the bottle shop during the evenings.

Rodriguez started in this fashion and when he turned 21, Old Ironsides just so happened to need a bartender. So, Billie Jean’s husband, Sam, trained him—and he’s been pouring shots and beers ever since.

“The Kanelos family has been great. They’ve been like my second parents. If I needed anything I would turn to them and they’ve been there for me,” says Rodriguez. “I think business is looking great especially with Mark Gonzalez doing the bookings now. I think we will be here for 100 years. Maybe I won’t be working, but I’ll be there.”

Before dance club nights like Lipstick, or decibels of live music were prominent on 10th and S streets, Old Ironsides used to close at 11 p.m. It wasn’t until Grant Hudson and Danny O’Grady asked Kim if they could run a DJ night called the Voodoo Hut on Friday evenings that the bar received its second wind in the form of live entertainment. From there, Tuesday nights welcomed local bands that performed on the floor in front of the venue’s fireplace and Wednesday evenings belonged to the Moe Better Mann Show. Orchestrated by local comedian Moe Better Mann, the underground talk show hosted psychics, musical guests and performed skits comparable to Saturday Night Live every week from 1991 to 2002.

Kim and her sister Marla Kanelos, both heavily involved in the local music scene, started regularly booking bands at the venue during this time, which received another remodel with the close of the bottle shop in 1992 and the demolition of the fireplace to make way for a stage. With its new platform to entertain crowds, bands like Pavement, Cake, Death Cab For Cutie, Sublime, Oleander and more have all spent time at Old I. 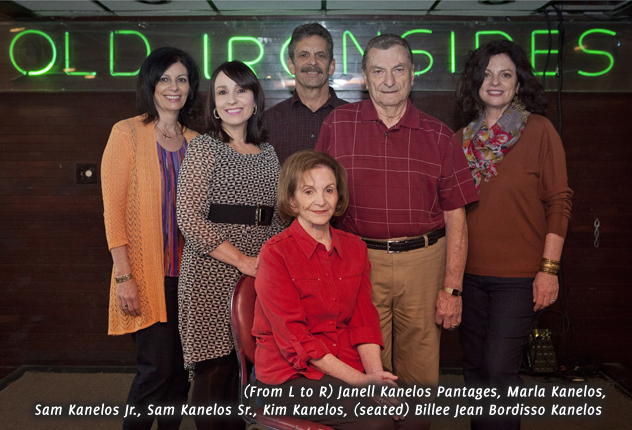 When asked about the future of Old Ironsides and a possible 100-year birthday bash, both Billee Jean and Kim admit the family has never looked that far ahead. Instead, they choose to live in the present and roll with change.

“We’ve all been really lucky for this to have been our careers, you really don’t realize it at the time,” says Kim. “I remember waitressing here to cooking in the kitchen and I love being in the creative stages of things and it has afforded me to be able to do that.”

Still, for long-time musicians like Tim Foster of The Trouble Makers, the venue will always hold not only first-time performance memories, but he says Old Ironsides felt like home as soon as he stepped inside.

“I’m really excited that it’s still there. There have been so many venues that have been lost throughout the years. It’s really hard to run a club and keep that energy of live music,” says Foster. “The city is not particularly friendly to live music and Kim and the rest of the Kanelos family have kept that going through a lot of challenges. On the 80th anniversary, I want people to not take this for granted. It’s a great resource and it’s a good time to be reminded of that.” 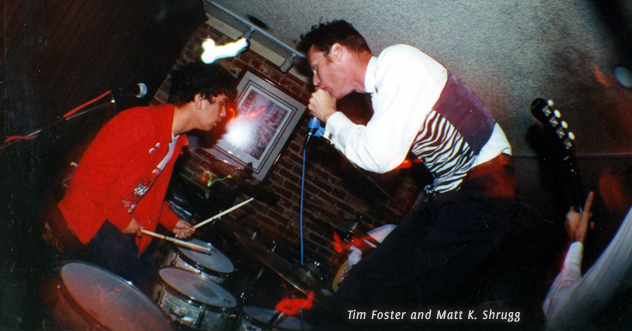 Drop by anytime to wish Old I (1901 10th Street, Sacramento) a happy big 8-0. While you’re at it, thank them for their years of loyal service to the local music scene. To peruse a full calendar of events, go to Theoldironsides.com.