Legendary skateboarder Tommy Guerrero stays in the moment on his board, and in the music studio 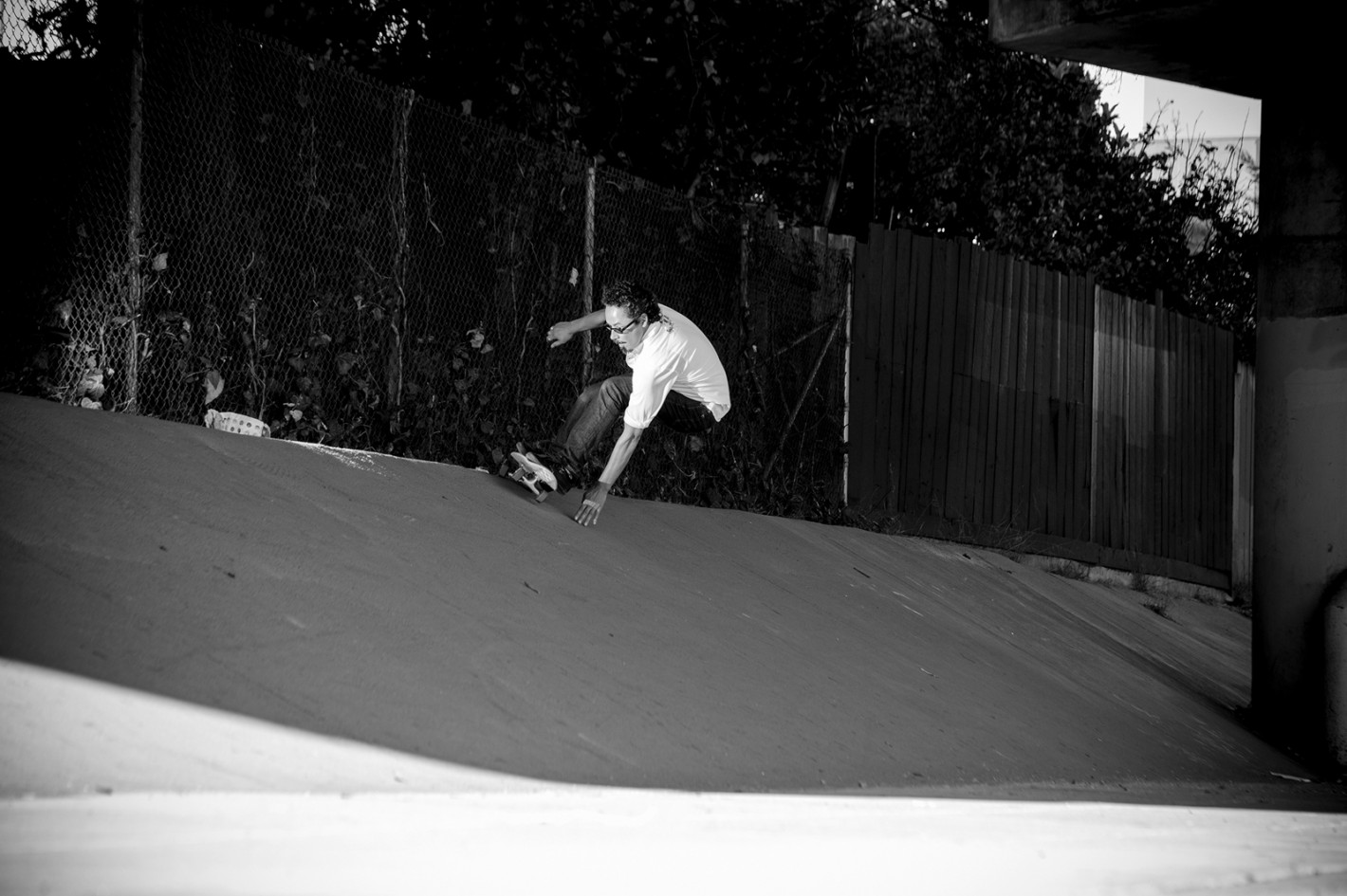 The Art of Being Fluid

While skateboarders across the world might regard him as a living legend, San Francisco native Tommy Guerrero doesn’t want that label for himself just yet.

“I hate that the term is thrown around so loosely,” he says over the phone. “And secondly, it’s usually used when people pass on. It’s like, ‘Fuck, I’m still here!’”

Instead, Guerrero—now a 49-year-old father of one—prefers to keep rolling with what he’s always known best: skating and music.

During his tenure as a professional rider and competitor for Powell Peralta’s Bones Brigade skate team in the ‘80s, Guerrero says he would always make time to come home and play his bass “for hours on end.” Although Guerrero currently serves as an art director for Krooked skateboards, as well as a member (but mostly an ambassador, he says) of the Converse CONS pro skate team, he’s also grown into a multi-instrumentalist who plays guitar, keys and percussion, in addition to bass.

Music, he explains, was a childhood passion that he began taking seriously as early as 1978, when the Ramones came and put on a show in front of San Francisco’s City Hall.

“It changed my life,” Guerrero says. “Being a skateboarder was already kind of an outlaw, rebel thing to do. And the punk ethos went hand-in-hand with skating … So me and my brother instantly were just enamored.”

Skating by day and rehearsing by night, Guerrero ended up forming a few different punk bands throughout the ‘80s—Free Beer perhaps being the most well-known. As a new decade trickled in, however, Guerrero says his band-playing days slowly came to an end while his skating career soldiered on. But that didn’t mean he was done with music.

Investing in a drum machine and a 4-track recorder—the very first Portastudio, as he recalls—Guerrero continued recording his own tunes, until eventually he got featured on a jazz compilation album in 1995.

Around the same time, Guerrero also provided the soundtrack for a skate video in promotion of a clothing company he had started called Forties, which caught the attention of Galaxia and Mo’ Wax Records. Guerrero produced three projects under those two labels at first, and then a slew of others throughout the 2000s and 2010s—he now has 11 albums in the bank, according to his website.

His latest release, 2015’s Perpetual, is an extension of sorts to the album prior, No Man’s Land, which he characterizes as a “break-beat spaghetti-western noir.” Both albums stem from desert rock and world music influences, including Tinariwen, Bombino, Gabor Szabo and John Zorn, among others.

Now, about six months after Perpetual dropped, Guerrero is embarking on a very brief tour up north to Oregon and back down again to San Francisco: a “run,” he calls it.

“This is just to go and play some music,” he says, “just to go do something, really.”

Before he stops off at the Shady Lady Saloon later this month with drummer Chuck Treece and bassist Josh Lippi, Submerge was able to chat with Guerrero about music, skateboarding and his surprising ties to Sacramento. 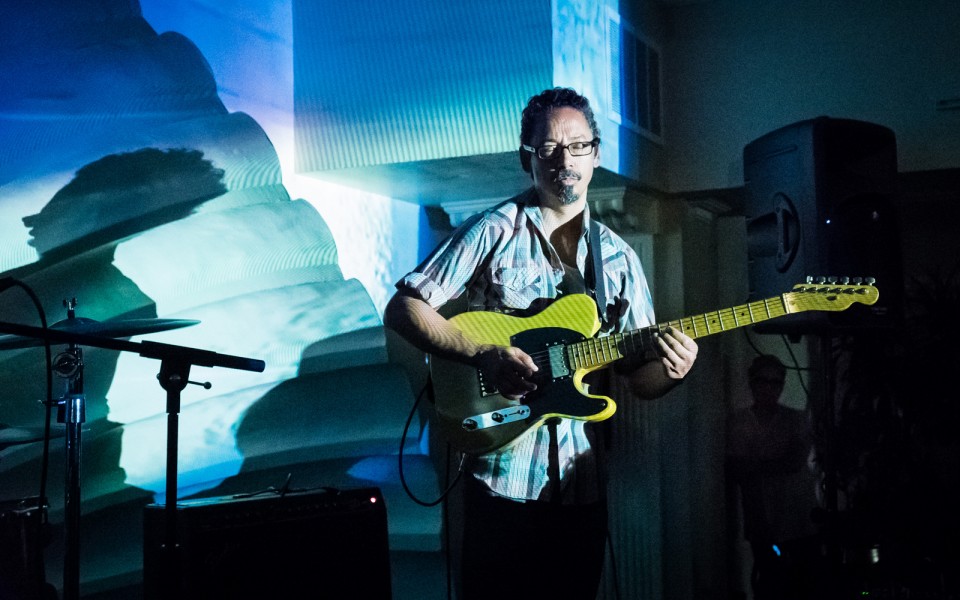 Would you consider your music to be tailored toward skateboarders, or that specific culture at all? Or is it just music for a general audience?
Music is for anyone, just as anything is. And I really can’t stand the way people need to pigeonhole you so they can market you in a specific way. That’s what so many people try to do in the music world … which I don’t agree with. It’s either art, or not. And it’s either good or bad, you know, depending on your taste … And, you know, I get a lot of support from the skate and art and surf community, which is great. I love it, that’s my family. But I would hate to be limited to such things, because I’ve met people anywhere from, literally, 5 [years old] to 65 who dig my music. It’s for everyone and anyone.

Would you say that your musical style is along the same lines as your skateboarding style? Your music, to me, has somewhat of a laid-back, free-form feel to it. And your skate style also seems very free and loose, but fast-paced at the same time.
I think the correlation is more about being in the moment. The thing about street skating … everything is in the moment. It’s very off-the-cuff; you’re improvising as you go down. You see a curb, you hit it. You see a stairwell, you see a driveway, you see a bench. Whatever it is, you’re hitting it along the way. And none of this is pre-planned. So music is kind of like that for me … I just want everything to be fluid and seemingly organic and seemingly natural—not forced. And that’s kind of how I approach everything. But I think that’s kind of the thread within skating.

I’m curious to know if you ever wish you were as well-known or famous for your musical prowess as opposed to your skateboarding career.
No. I identify myself, if I have to, as a skateboarder. And that’s just fine. The music thing for me—I’m not looking for accolades from that world. I don’t even really orbit in that world or have anything to do with the music industry. I’m removed from it, which is fine.

Is there anything you wish you could change about the music industry as a whole? Other than the blanket labeling and branding, I mean.
My only thing, truly, with the business end of music is that it would be nice if the people who are trying to run the industry would understand that without the artists, there is no art. So by not paying them what they deserve for their art, or their product or whatever people want to call it, it’s doing a huge disservice to the community. Even [for] people who have my music and dig it. You know, I’ve had people tell me, “Oh, I love your stuff. I just downloaded it from blah blah blah.” And it’s like, “Cool. I’m glad you dig it. It would be nice if you supported me financially.” Just because of the cost of making a record … The cost of me recording, the mixing, the mastering, the art and design and then the final production of the CD or vinyl and/or a digital release [is high]. There’s lawyer fees, publishing fees—it all adds up. I mean, I can’t get away with making a record for less than $10,000 … It’s always difficult to get people to understand that in this day and age, with technology being what it is. Everyone just thinks that music comes out of the ether into their computer somehow, or into their phone. And they don’t even think about the creation of it … So that’s just my thing—trying to get people to be aware of supporting these artists.

I wanted to ask about Sacramento a little bit. Why was Sacramento included on this run? And also, what are some memories you have of Sacramento, if any?
Well, of course I’ve been to Sacramento—many, many, many times. But the idea as we’re coming back [to California]—because we’re gonna hit Bend [Oregon] first, then Portland and then Medford—was to have sort of a stopping point. And since Josh is from Sacramento … why not just play [there]? I’ve never properly played a gig in Sac, and I thought it would be fun. And I know so many skaters there—just so many people—that it just made sense. I grew up in San Francisco, and so we knew a lot of skaters from Sac. We’d actually go up there and skate all the time. 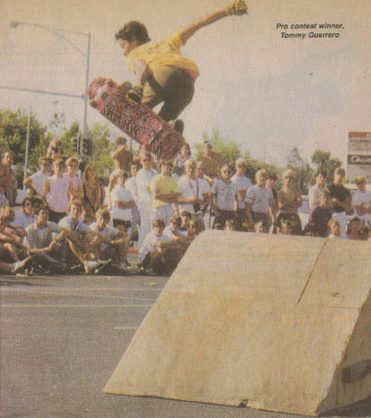 Wow, really? Any specific spots you’d skate back then?
Not specifically. There were some curbs, some banks. I forget the names of them. But in 1985, Sacramento held a street-style skate contest … I think it was my third street contest ever. And I turned pro there. And that was sort of the launching pad to everything I do with skateboarding. So I turned pro in ’85 in the Tower Records parking lot [off of Watt Avenue]. And what’s interesting is that they just did the Tower documentary … So that was super cool to be part of that, kind of coming full circle. I have a photo of me in 1985 standing in Tower Records next to a stack of Thrasher magazines.

That’s amazing! So you’re saying that contest in Sac was the turning point in your skate career?
Yeah, it was. Because I won the contest and turned pro. And then the next year my [Powell Peralta] board came out and everything happened. So yeah, I know a lot of cats up in Sac, all the old skaters.

See Tommy Guerrero live when he and his band play the Shady Lady Saloon on April 22, 2016. Soak up good vibes, great drinks and copious amounts of old school skater cred. Shady Lady is located at 1409 R Street in Sacramento. For more info, go to Shadyladybar.com. 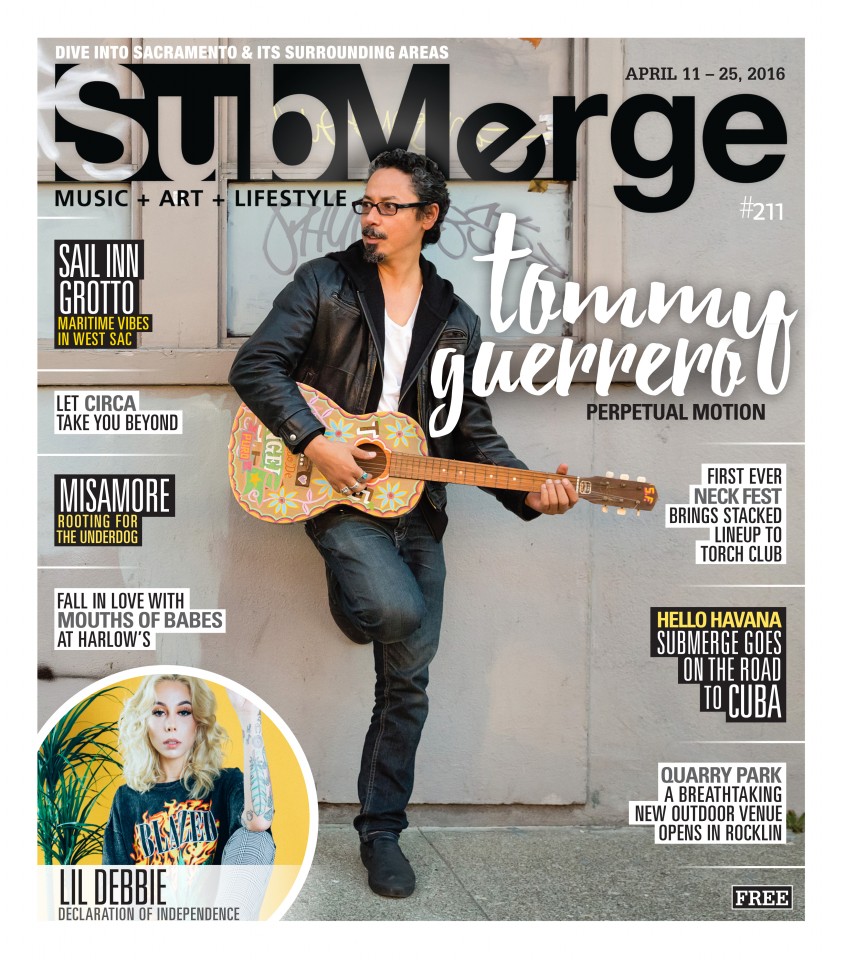