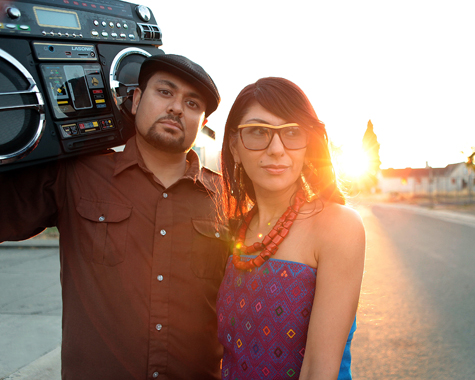 It feels as though it was only a matter of time before Sol Collective made an impact beyond its community activism and support for the local arts and music scene. Collective founders Estella Sanchez and Anand Parmar added recording artists to their resume last year with their debut as World Hood, a project that developed in the wee hours of the night in the gallery.

A nonprofit organization and art gallery located on 2574 21st Street, Sol Collective hosts beat battles and touring psych-rock bands and runs a world music series titled Global Hood, which brings artists that operate in the meshing of tropicalia bass, break-beat, electronica and Cumbia genres to Sacramento. There are B-boy workshops and practices in the back rooms and music production classes for high school students. It is a meeting hall for activist groups to discuss community empowerment and youth development. The gallery is a hub of creativity bound to rub off on its founders.

Nights at the collective rarely ended with a band’s last song for Sanchez and Parmar. After the venue cleared, the couple would hole up in the gallery’s recording studio and work off the excitement from watching the performers.Â “It was definitely convenient to record at Sol after a show,” Parmar said. “We already had things set up and could put in a few extra hours to get a song in. All of the acts we have brought to Sol, specifically through the Global Hood series, were inspiring in one way or another. They have been groups whose music we believe in and were committed to promote either because of their message or because of the cultural influence in their music.”

Anand Parmar was born in Africa and is of Indian descent, while his partner Sanchez is of Mexican descent. Anand said when he started to shape the World Hood sound, he always tried mixing different cultural elements into the production, but collaborating with Sanchez and incorporating her culture and language was a natural progression. “It’s a mix of what we heard on the radio growing up in Northern Cali in the ‘80s and a mix of what we’d hear at home, be it what our uncles or cousins were playing,” Sanchez said. “Even in the studio I go back and forth in elements I want to add that are familiar to us.”

A DJ and producer for roughly eight years, Parmar would play beats for his partner, mostly culled from blending Latin dub and tropicalia with West Coast bass and hip-hop. Sanchez would sing over his tracks alternating between Spanish and English, sprinkling in slang and spiritual incantation. Sanchez sang mostly for the release, not considering the possibility of the songs going further than the studio walls.

In April of last year, Parmar collected 12 of the recordings and uploaded them to Soundcloud, an online audio distribution platform, and then moved them to a similar site called Bandcamp. He designed an album cover and called their group World Hood, a name that speaks to their globalized sound and grassroots activism. By May the duo was being interviewed by the MTV’s Iggy blog and later appeared on NPR’s Alt.Latino station. The coverage swelled further with Hype Machine, Mad Decent Blog, Dutty Artz and National Geographic’s music blog (yes, they have one) taking notice. “It was a little bit of a surprise for us,” Sanchez said. “We had been working on music for a while. Anand wanted to just put it out there and let people hear it. We didn’t expect the coverage.”

The hype moved at a pace bigger than the band as the phone rang and the inbox received requests to tour and perform. It was an invitation the group had yet to consider. “We definitely got invited to play and tour before we even put our live set together,” Sanchez said between laughs. It’s almost a year since they posted the album and she is still in disbelief that she’s juggling a time-consuming nonprofit–a master’s thesis that became her life’s passion–a family, and a burgeoning band. “It’s not stress, but we’re trying to find a way to balance it and do it well,” she said. “I love what I do at Sol Collective and Anand is a big part of it as the music director there. We’ve been finding ways to complement it.”

Being true to their moniker, Parmar and Sanchez use the band as an opportunity to travel and promote Sol Collective. It began with their first show. The duo was invited to the Aborigine Music Festival in Winnipeg, Manitoba, Canada. The high tide in the local scene has sent artists like Sister Crayon and Death Grips to the festival circuit, but a debut performance at a festival is unheard of. “It went really well,” Sanchez said. “It’s a lot easier to perform when you’re in another country. I figured if it all goes bad, I’m on a plane tomorrow and that’s that.”

It did not go bad, though. Radio stations played their music prior to the festival, which meant the duo were welcomed to the festival with excitement and familiarity. World Hood performed as part of the Pow Wow party at the Pyramid Cabaret in Winnipeg. The group played alongside A Tribe Called Red, a collective of native Canadian DJs, which Sanchez and Parmar were fans of. “We got some feedback from them,” she said. “They really loved what we were doing in creating beats and native thinking and mixing up the languages. It encouraged us to keep on that path.”

Sanchez said she hopes to bring A Tribe Called Red to perform and participate in workshops at the center. Sol Collective also approached them to be a part of its #ArtCultureActivism SxSW showcase in March, but conflicting tour dates in Canada hindered their availability.

Sanchez and Parmar view the SxSW showcase as another opportunity to not only promote their collective and its community garden build project, but to showcase Sacramento artists and encourage musicians to tour here. The showcase features World Hood, along with local hip-hop act DLRN and producer/DJ Defeye, among several national acts. “When we travel and do things, it’s to bring folks back to Sol Collective,” Sanchez said. “We also have press passes this year, which they gave us… we’ll have the opportunity to go to workshops and events to approach artists we want to promote and bring back to Sacramento.”

In January, World Hood posted the song “Mundo Libre,” which translates to free world, to their Bandcamp page with the description “Single from the upcoming EP. Dropping soon.” The song is the title track to the EP. Sanchez said she and Parmar would work on finishing the EP that night. The goal is to release the five-song EP in late February/early March for free download prior to their SxSW showcase. A full-length will follow in the summer, most likely remaining DIY. “Nothing concrete at this point,” Sanchez said. “We’ve had some interest [from labels]. We had people ask us to send them our stuff. But we’re still trying to figure out what we’re trying to do and how much we’re putting into this project.”

“Mundo Libre” is on par with the group’s pre-existing material of Afro-Latin dub, with hints of Reggaeton in the arpeggiated vocals. Now that World Hood is aware they have an audience, it’s altered the process a bit. Sanchez said her partner Anand is a meticulous worker in the studio and that his work ethic rubbed off on her in the new sessions. “We paid more attention to the message,” Sanchez said. “Now that people are interested in listening to us, we’re more conscious and aware of what we’re putting out. With the first one I didn’t think anyone was going to hear it, so I didn’t care. The first one was freestyle, where this time I actually stopped and said, ‘wait let’s record that again,’ instead of just saying ‘oh that was fun, I’m going to sleep now.’” 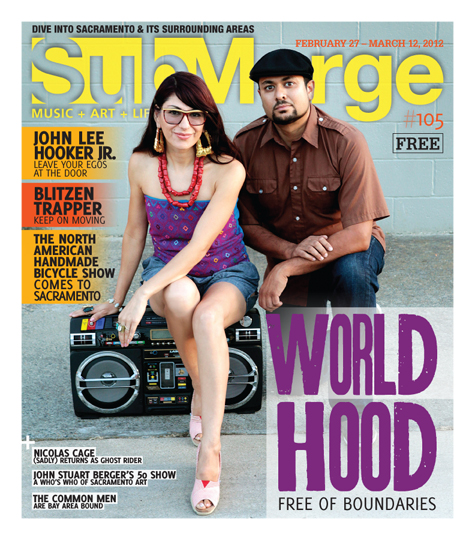 World Hood will be releasing a new EP soon. In the meantime, check out “Mundo Libre” at http://worldhoodmusic.bandcamp.com/. For more information on Sol Collective, go to Solcollective.org.