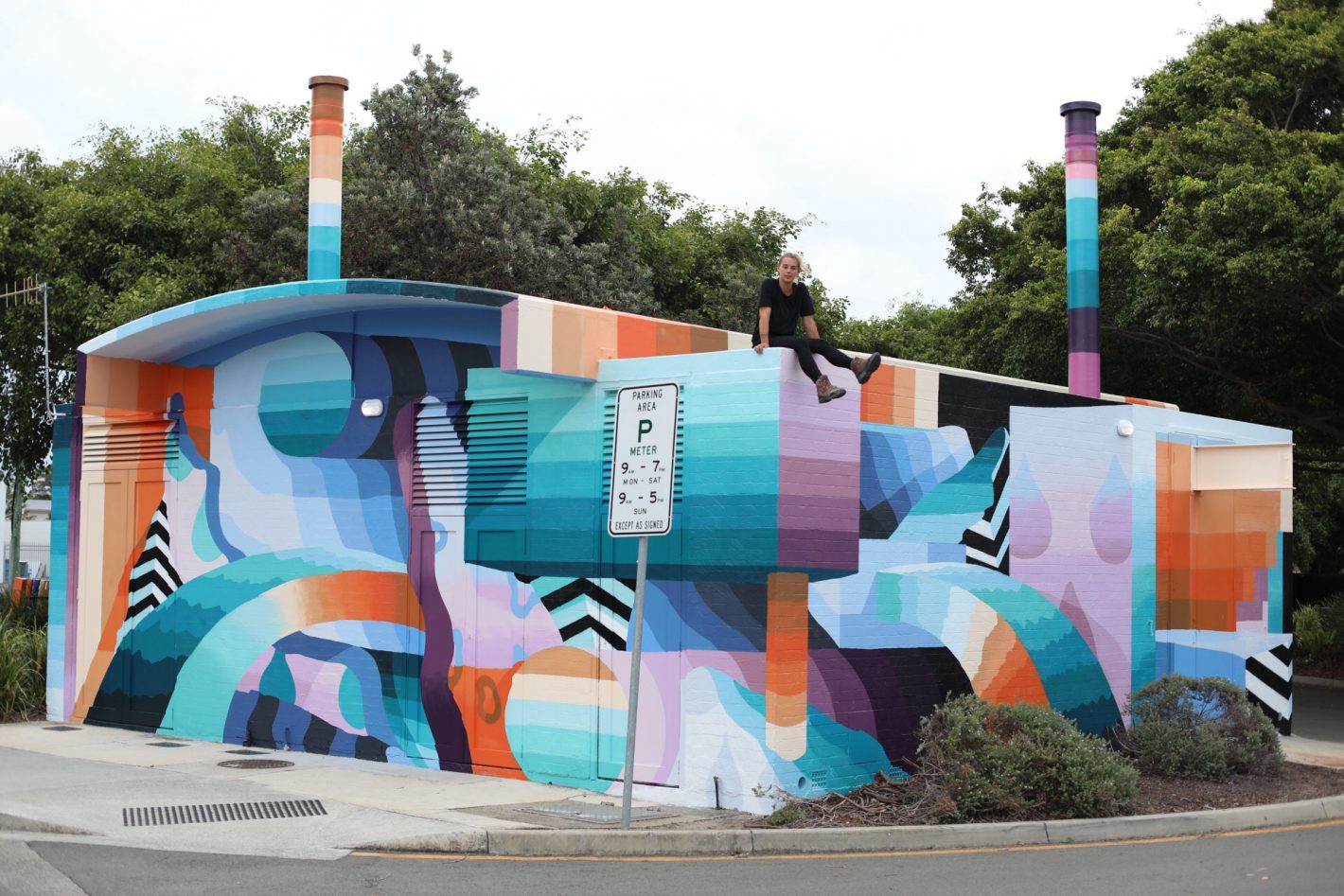 Before his U.S. debut and solo art show entitled Exordium, the 23-year-old Australian street artist who goes by the name Leans is completing a series of unusual commissions. He has carved out a niche for himself by painting the exteriors of houses and large-scale public art in his native land of Brisbane, Australia.

Most people love, or at least appreciate murals, but they wouldn’t necessarily envision having one adorning their homes. Maybe that’s because they haven’t seen Leans’ work. With his reimagining, the flat predictable box of the standard family home becomes a startling optical illusion where corners disappear into trees and sky. It’s only by moving around the building that the visual elements devolve and reveal the simple colors and forms that create the optical effect.

Despite only painting with seriousness for six years—a ridiculous feat by any measure, Leans appears to have gotten the right cross section of education and come along at the ideal time. Veteran Aussie street artists Drapl, Treazy and Sofles taught Leans how to paint in unfriendly circumstances, how to scale from small sketch to big wall, and how to create dimensional letters. Australia, like most other countries, viewed graffiti as an act of rebellion and vandalism when this first wave of artists emerged. But just like here in the States, as the styles went from simple tagging to more sophisticated, vibrant throw-ups, scorn became admiration. The timing couldn’t have worked better for Leans; a good portion of his commissioned work comes from Queensland Funding for the Arts.

When he was still too young to drink legally in the United States, Leans jumped on Instagram (as millennials are wont to do) to seek inspiration and feed his imagination as he developed his visual voice. Within a few years, his feed blew up and made him a full-time artist.

“It’s just a square that says ‘this is me,’” Leans jokes, referring to Instagram’s format. “But it got me thinking about squares.” 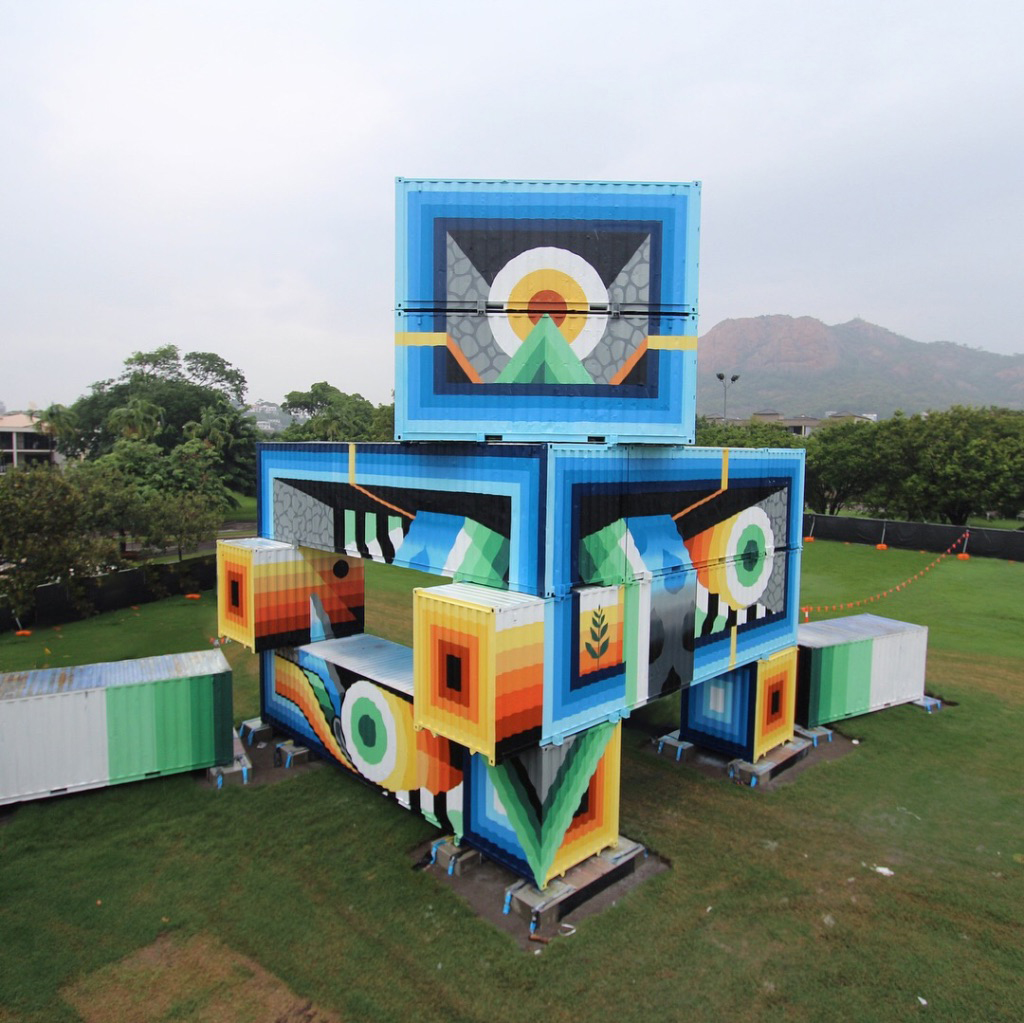 This might have also contributed to his obsession with buildings and his regular nod to retro video games.

Recently, his output has morphed toward something more abstract and psychedelic than graffiti. He credits his evolution and meteoric rise in part to his collaborative relationship with his partner, Zan, who has contributed to all his outdoor work over the last year.

It’s impossible to tell sometimes where the object leaves off and the paint begins. In his words, he’s going for “real and unreal at the same time.” Rivers of pixels give way to voids and the edges blur into the background.

“I got an iPad about a year ago,” Leans explains. “So I take a photo from an angle that I like and then I add shapes and patterns wherever I want on the screen. Using this new tool gave me the confidence to paint whatever I wanted. I got there faster with no restrictions.” 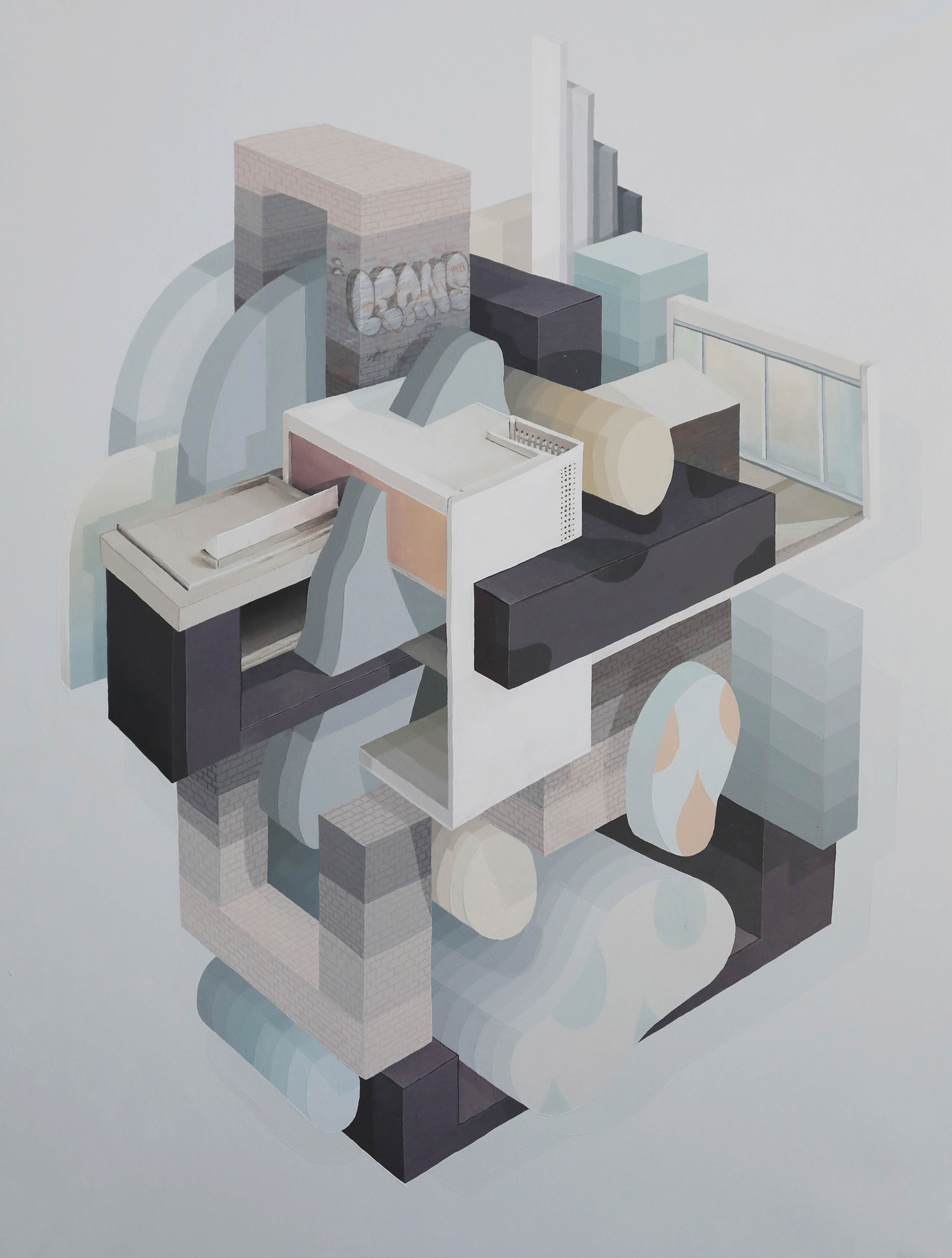 This technological leap forward allows him to put ubiquitous 21st century imagery in a blender with Magritte-esque trompe l’oeil and push the “high” button. It’s a fascinating and even comic reinvention of everyday objects that we visually take for granted.

One year in architecture school made a deep impression, enough to teach Leans some things, including that he doesn’t want to be an architect. It did give him some drafting chops, though, so he understands how to use the lines created by the siding or the nail heads in the photo as visual markers, then he sketches an outline or mock up. When he applies the mock up to the building, he and Zan, who helped develop this technique, fill in the shapes accordingly.

“Kind of like my own paint by numbers,” Leans jokes.

One artist that Leans really admires is Felipe Pantone, whose work is almost an amalgam of industrial design and art. Pantone’s control of space made a big impression on Leans early on. Though the two are vastly different with Pantone favoring sleek, expensive-looking geometry and Leans’ style more fluid and free-form, it’s easy to see they are playing with similar technical approaches that compel the viewer to double-take. 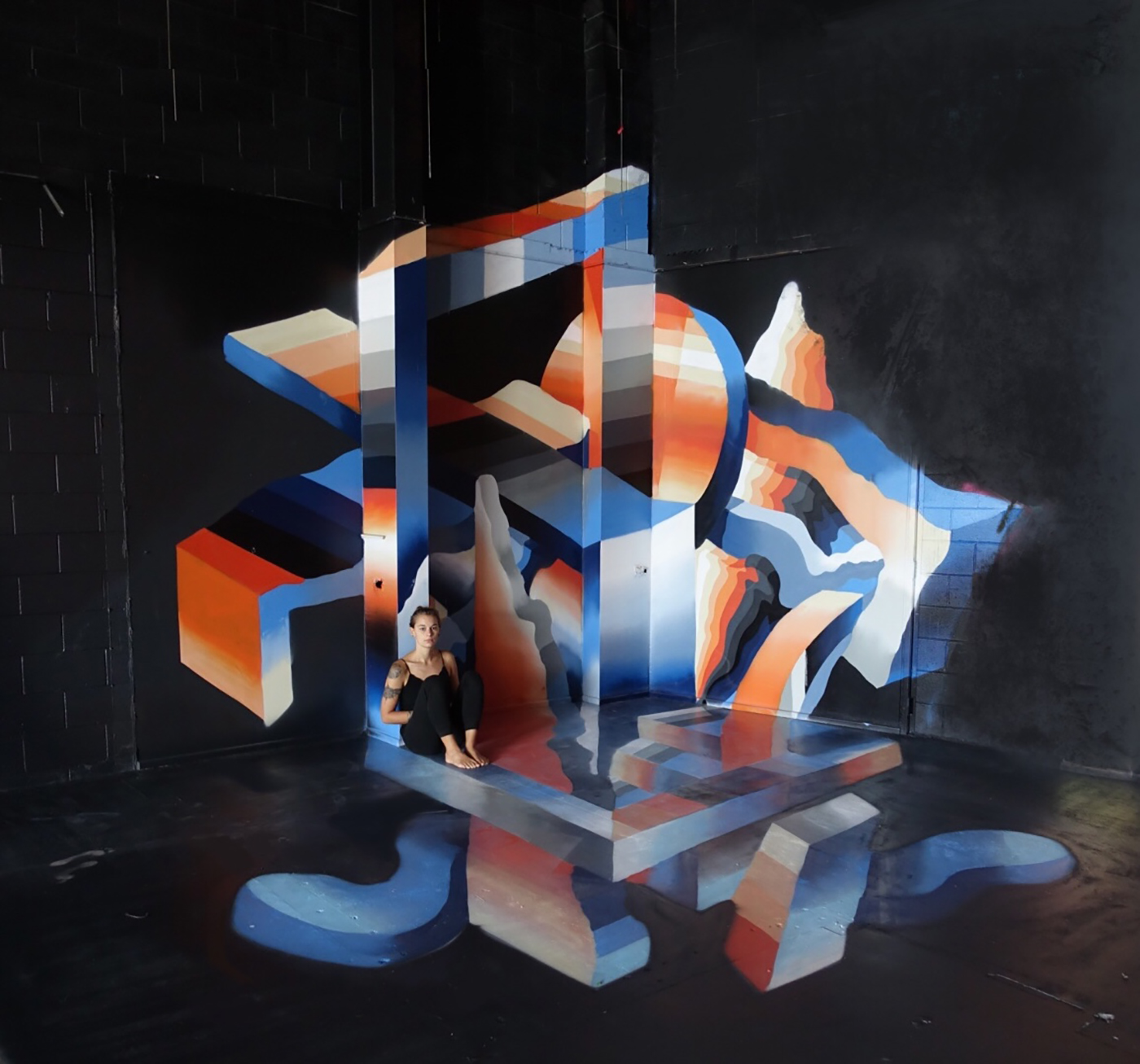 In the upcoming exhibit at The Chambers Project in Nevada City, Leans will show eight paintings, his first collection on canvas. When asked how that feels, he replies, “It’s different, it’s just a flat surface, and it’s small!” then laughs.

In some ways, canvas is much easier because he doesn’t have to contend with dimensions, surfaces and weather, but the paintings have a similar magic, just scaled back down and with more intricacy.

One highlight in the Exordium show that Leans is quick to point out as his favorite, is an embroidered design Zan created from a drawing he did. Another piece is an augmented reality collaboration with digital artist Sarah Capon. When you hold a tablet in front of the work, it comes alive on the screen. This piece is probably a good indicator of where his work is going. 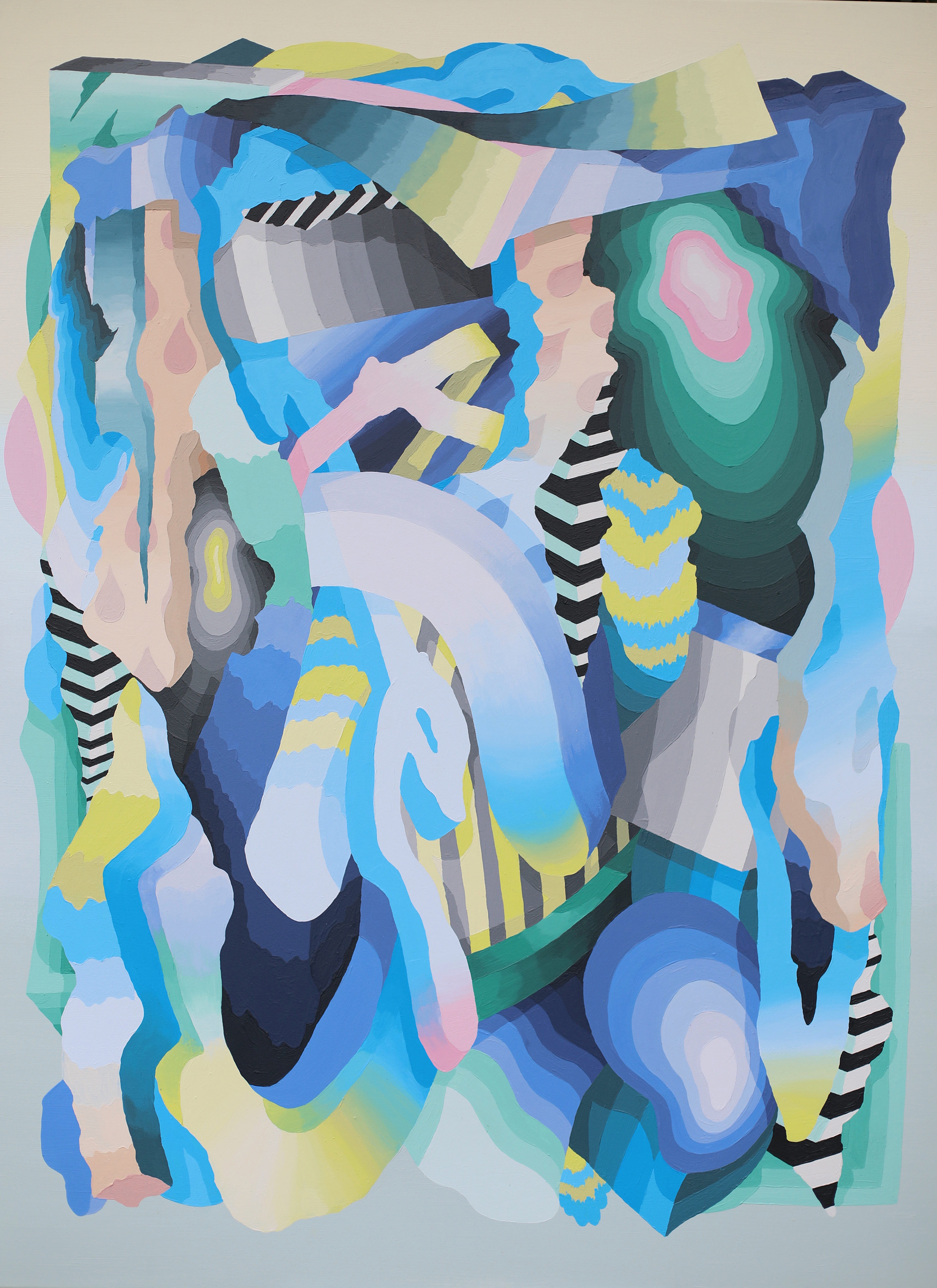 In the future, Leans wants to move into sculpture and hands-on fabrication so that he is creating the objects he’s painting, rather than just adapting to prescribed space. He’s also eager to experiment with virtual reality that would interact with an installation so that viewers have an immersive, dual experience.

His fascination and startling expertise in executing optical illusions as well as his subtler color combinations have given Leans a keen international audience and plenty of play in his home country. Shockingly, he hasn’t had to find work—it finds him.

“I’ve got all my work from Instagram and word of mouth,” he says.

Australia is dotted with public works by Leans, but he’s relatively unknown in the United States—until now.

Despite the demand for his flavor of art, Leans is humble to the point of bashful. Brian Chambers, owner of The Chambers Project, notes that aside from his prolific body of art for someone so young, it helps that Leans has a great work ethic and a positive attitude, “all the right tools to go far in the art world.”

It’s fitting that Leans’ art has a futuristic bent to it since he is keenly focused what will happen next, specifically everything he’s hungry to accomplish. To catch an artist with this much promise at the beginning of his career is a rare opportunity that is not to be missed. 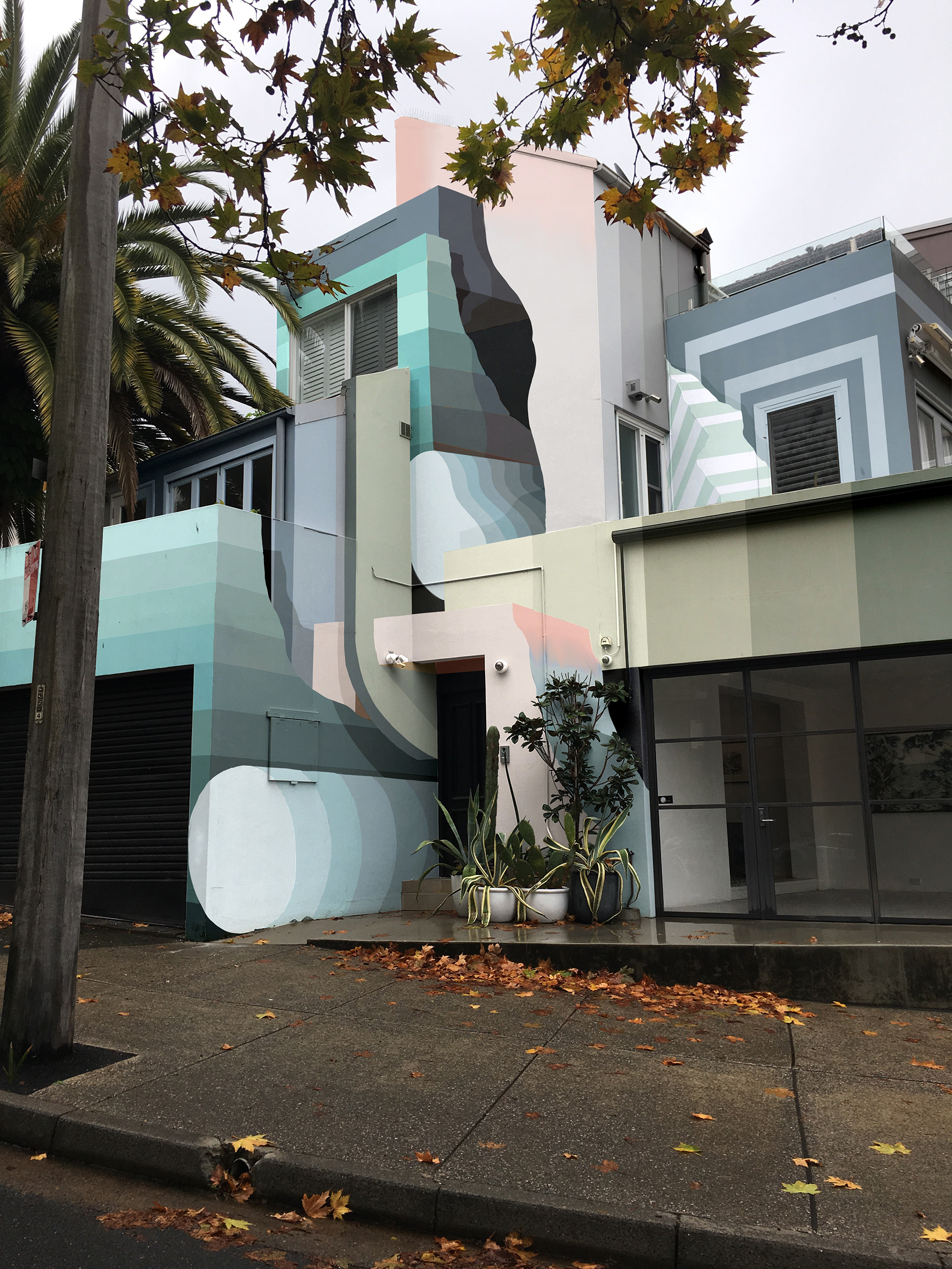 Exordium opens Oct. 27, 2018, at The Chambers Project (103 Argail Way, Nevada City). The gallery will hold an opening reception on the 27th from 5–9 p.m. Exordium will be on exhibit until Nov. 24. For more info, go to Thechambersproject.com.