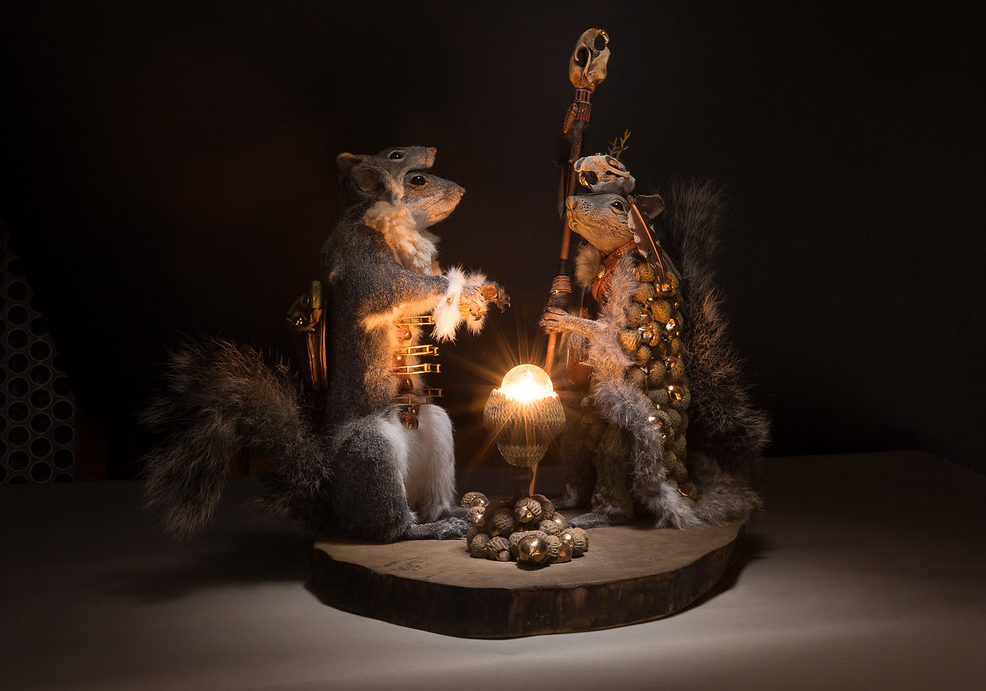 When you picture taxidermy, love isn’t the first thing that comes to mind. You think of hunting lodges and rich old men and trophy cases. Gaston singing, “I use antlers in all of my decorating!” Death, decay, formaldehyde. Taxidermy literally means “arrangement of skin.” It’s morbid. It’s dark.

That’s not how Dilley sees it.

“I believe that once an animal passes away, it loses its spirit, but you can still see it in that animal,” she says. “That’s what I try to bring back with my taxidermy. I try to reincarnate it, give it a second life, something beautiful or magical.”

In much the same way, art gave Dilley life when she most needed it.

Dilley grew up in Binghamton, a small town in upstate New York. She didn’t care much for school. She was always late. She drank and smoked “a lot” of weed. Her senior year, she was kicked out of high school and had to transfer to a rival school to graduate. The only reason she’d go was to attend art classes, of which she took as many as possible. Her art teacher, aware Dilley was new and didn’t know anyone, would let her take lunch in the art room. She barely graduated, getting through solely on the strength of her art grades. “By the skin of my teeth,” as Dilley put it. 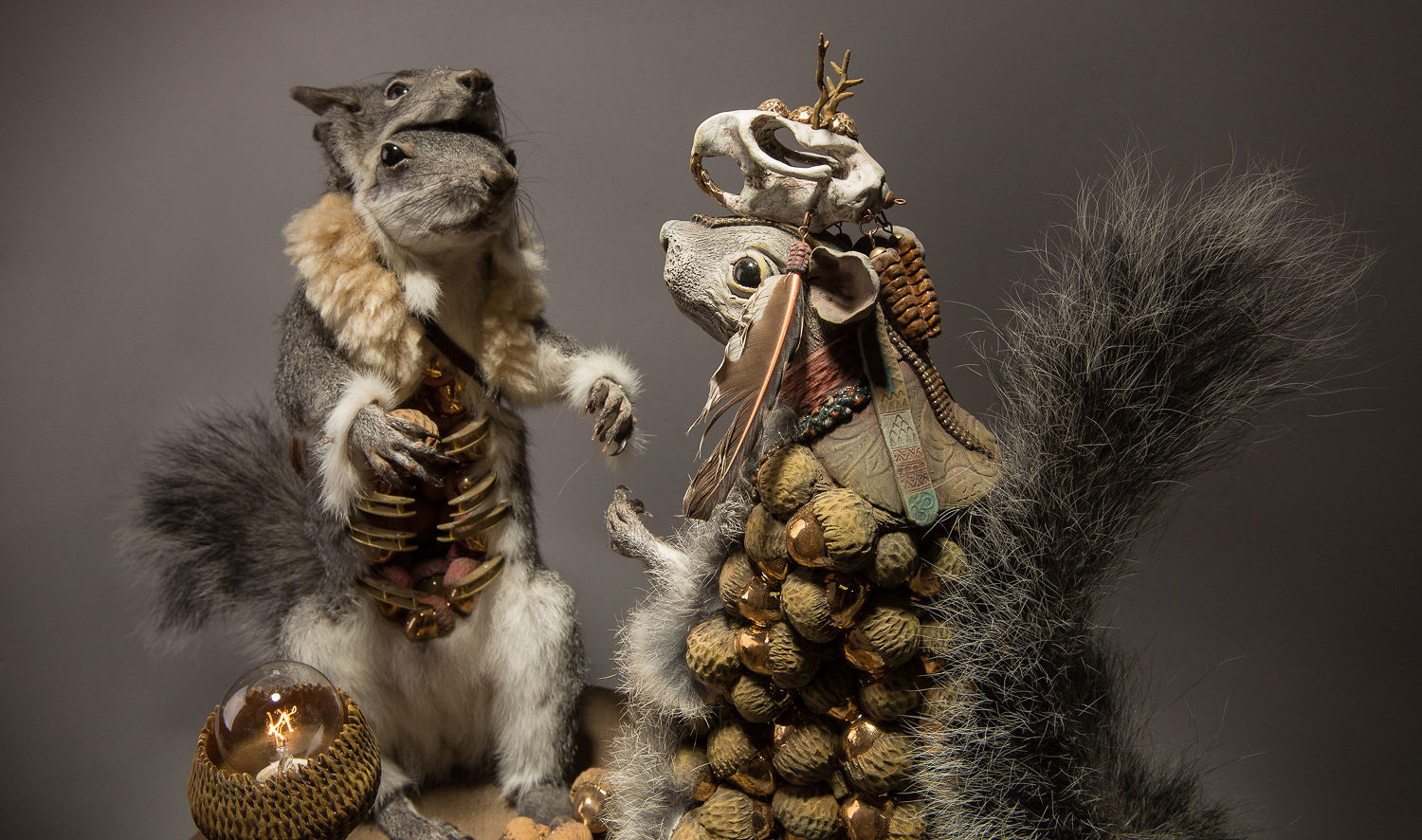 Another shot of “Insight”

She may have always known, but at that point it crystalized in her mind: She loved art. There was nothing to do but keep doing it. She enrolled at her local community college and earned an AA in Fine Arts. The very next day, she left New York for good.

For the next two years, Dilley traveled the country following the band Phish. Traveling wasn’t something her family could afford during her childhood, and this was her first chance to leave her hometown. While at community college, she’d taken silk screening and taught herself how to sew. At each tour stop, she’d sell posters and patchwork clothes, earning enough money to allow her to continue following the band.

“That’s when I learned how to hustle,” says Dilley. “It was make it or break it.” 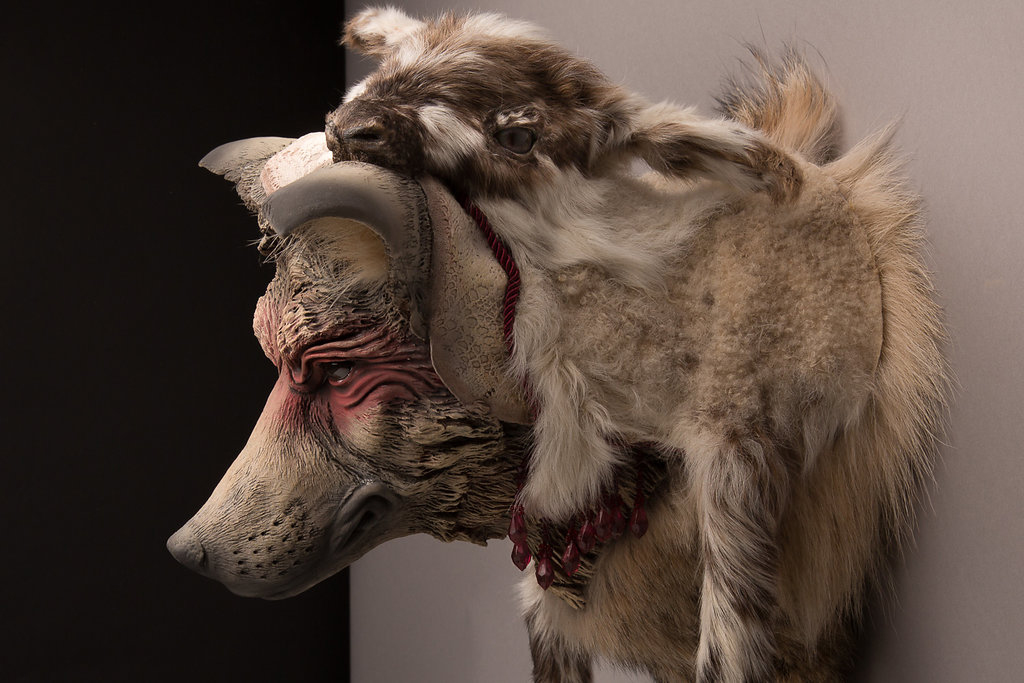 On tour, she picked up a skill they don’t really have classes for: how to talk to people.

“You’re walking into a parking lot carrying posters and wearing clothes that associate you with the band. People are curious. Some people want to trade or barter; I learned to do both. And how to have a conversation with anyone, from teenagers to 60-year-old men.”

The period was also the start of sobriety in her life. After shows, she worked for Green Crew, one of Phish’s non-profits, picking up cans and recyclables. The band started rewarding them with tickets to shows, making it even easier for Dilley to stay on the tour.

“We had to stay sober just to get where we were going next,” she explained. That reality came with some wisdom. “Working hard and partying all the time just don’t mix,” Dilley found. “You can’t do both.” 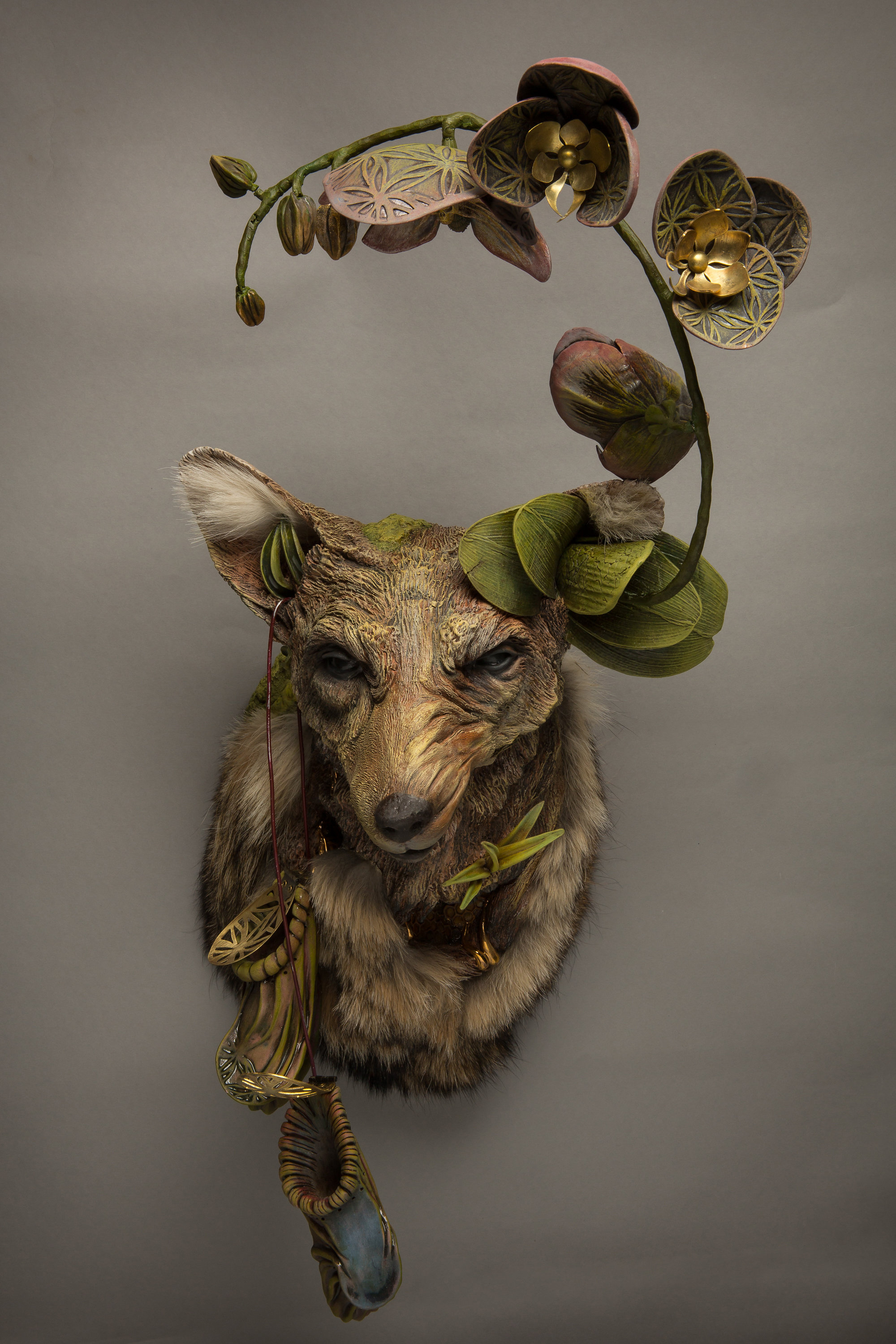 “I took every art class twice,” says Dilley. Not because she didn’t pass—she was in the President’s Club, making straight As. Every semester, she saved a slot for one of her favorite mediums.

Clay and metal sculpting, always animal-inspired, comprised the bulk of her work after graduating. She spent some time in Santa Cruz before settling in Grass Valley, just outside Nevada City. A month earlier, she’d had a son. Soon the realization set in that she simply wouldn’t have as much studio time as she used to. She needed to work faster and more efficiently, and so decided to try taxidermy.

“Turns out it’s not any faster, but I love it as a medium, and I can blend it with clay and metal. So I can approach it in a different way instead of traditionally,” she says.

The animals certainly come to her in unconventional ways. Dilley doesn’t hunt, but she’s not shy about picking up an unfortunate squirrel off the side of the road. Often she’ll get a little help from her friends. Recently, a neighbor who raises goats gave her a call, offering her a stillborn baby goat. Another friend, a journeyman carpenter, was working at a property when a peacock got sick, crawled under his car and died. Dilley’s alpaca vet (She owns two alpacas, which require a special vet) had a stillborn alpaca she was willing to give Dilley … on one condition. The vet wanted to know why the baby alpaca had died, and gave Dilley a list of things to look for after she skinned it. So Dilley performed an an alpaca autopsy. The finding: It had suffered a perforated abdomen, causing sepsis. 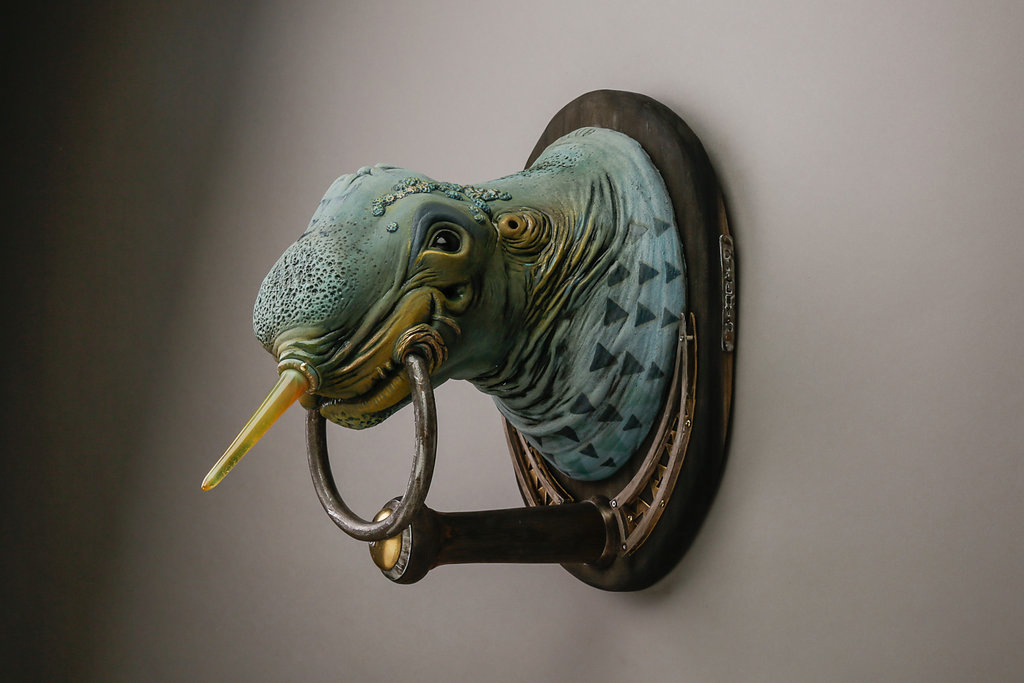 “I couldn’t make these stories up,” says Dilley.

Once an animal comes to her, she says, the day is set aside for that animal. She honors it with flowers and incense, and gets to work. It will require both skill and spirituality.

“They have a past life to tap into,” says Dilley. “I want my work to show that.”

In contrast to traditional taxidermy, she isn’t trying to disguise any blemishes the animal may have.

“I look at their imperfections as reason to embellish that part of their body, “ Dilley explains. “If it’s hit by a car and the side of its face is damaged, I’ll make some flowers growing out if it. I let the imperfections dictate what I do to it.”

Dilley does all of her taxidermy in a separate studio, both so her son doesn’t have to see the gory side of things, and for sanitation purposes. She’s meticulously clean, a habit she learned from growing up in a small trailer.

“Every night, I had to clean up all my art projects so we could have breakfast at the table in the morning and it bred me to stay organized,” she says. “Otherwise I’d be spending half my time looking for something.”

These days, her main use for alcohol is wiping equipment down. 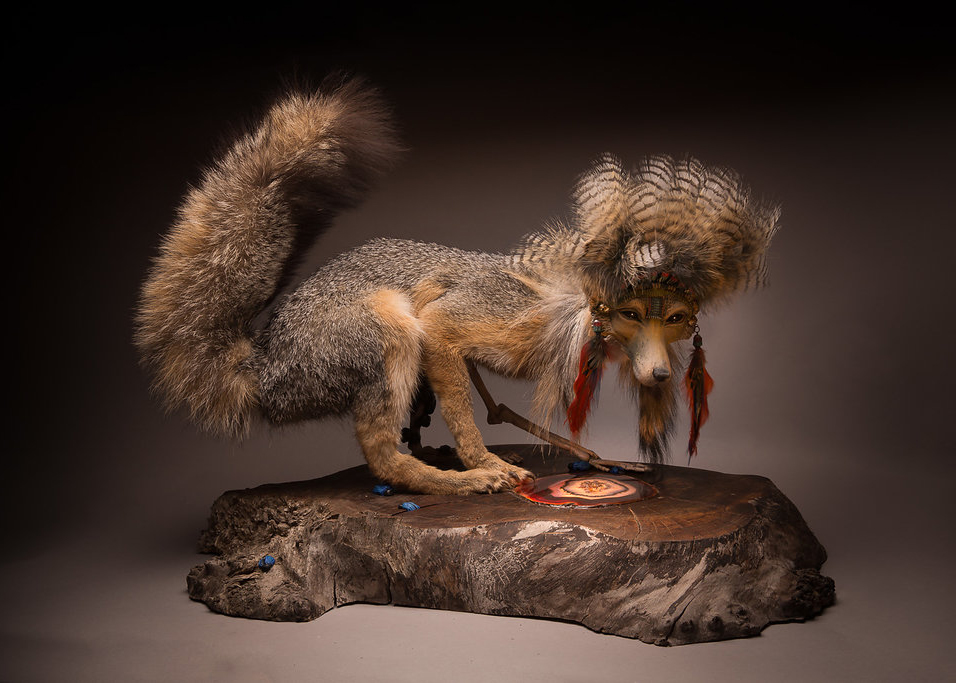 “I’ll have a glass of wine now and then,” she admits, “but other than that I’m completely straight edge.”

Dilley continues to surround herself with animals both living and passed on. The pond on her 20-acre Grass Valley property brings many wild species together. With her husband Rob and son Dash, she helps raise alpaca, two dogs, chickens, ducks and two goats—her spirit animal. When a mountain lion attacked and killed two of her other goats, she began a new routine. She set up a hunting camera, and after skinning an animal for her work, would set the skin in front of the camera to see what came for it. Soon, she discovered a family of bears lived on her property.

It’s all helped turn her life into a thriving ecosystem. Dilley now teaches a sculptural internship at a high school, installs pottery and reclaimed redwood at restaurants and storefronts, and helps run “the Nail factory,” an art collective of over 30 tenants at a 36,000 square foot warehouse. At home, her husband—a professional marketer—runs her marketing. Her son loves foxes and reading animal stories, which have often given Dilley inspiration in her work. But her life is far from settled.

“Everything is a transition in life, and we’re always evolving,” Dilley believes. “If you would have told me five years ago I’d be skinning animals and making taxidermy, I would have said you’re fucking crazy,” she laughs.

So what’s next is anyone’s guess.

“It’s hard to say where it’s going to go,” she says. “My goal is just to do something I love every day.” 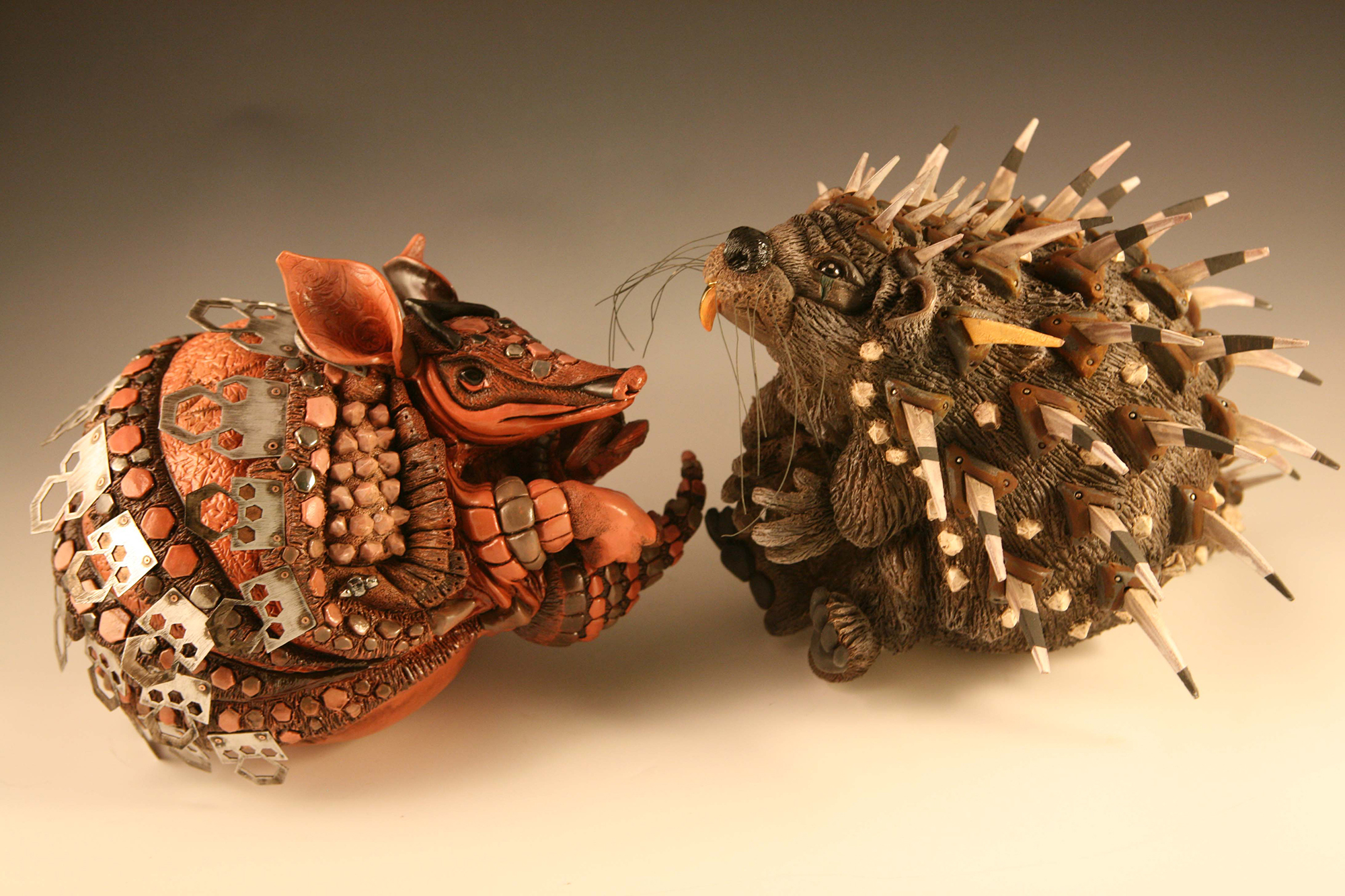 Hollie Dilley’s pop-surrealist sculptures will be on full display during the month of May. Her solo show, Reincarnation, has a kickoff event Friday, May 3 at The Chambers Project (103 Argall Way, Nevada City) from 5–9 p.m. For more information about Dilley’s art and taxidermy, please check out Holliedilley.com.