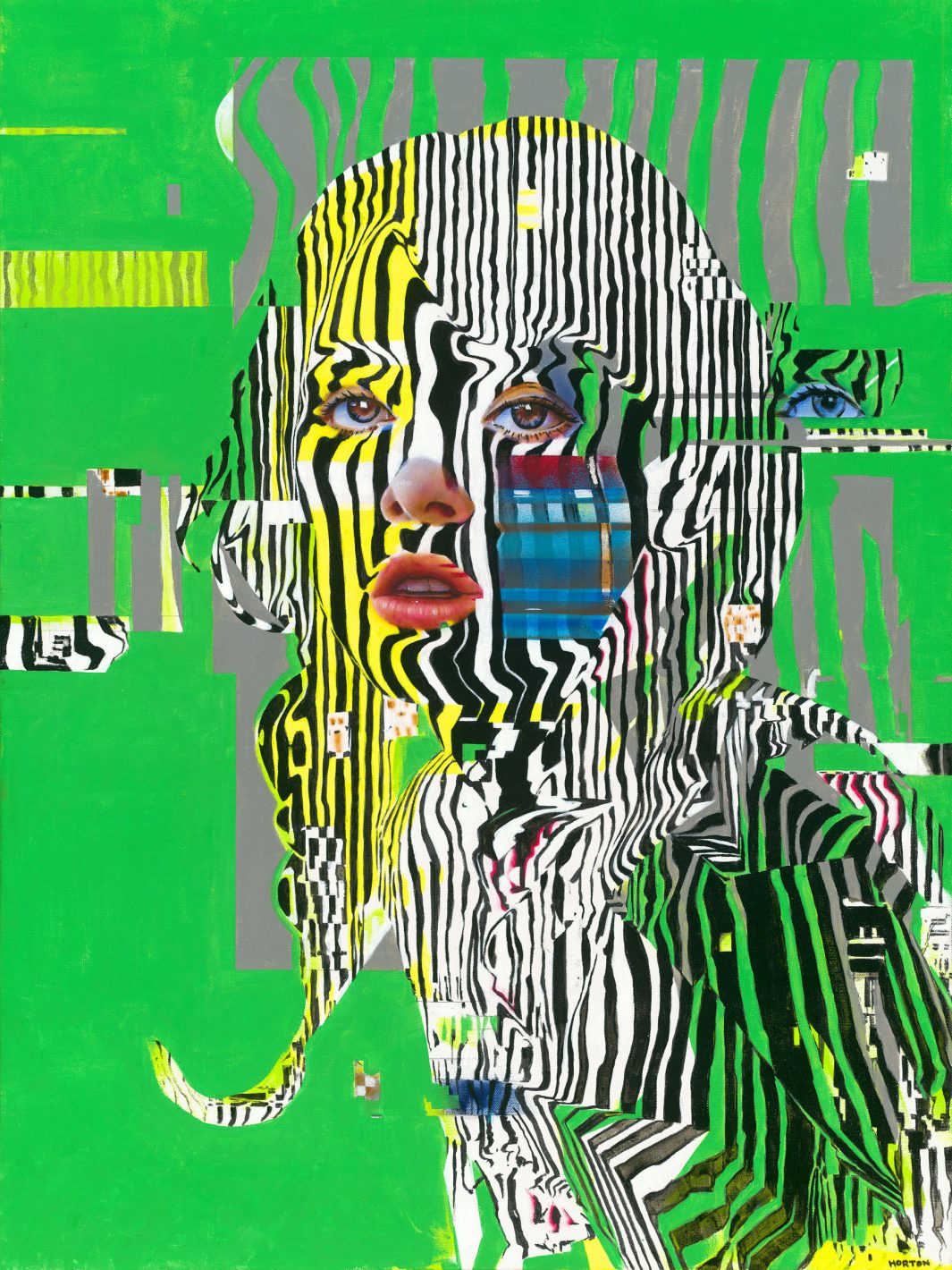 She Married A Chess Computer In The End

Glitch: a harsh term for the beautiful errors bred in the formidably rapid tide of new technologies. What resembles the machine’s first serious grasp of art begins as a mistake, a failure of precision or control. Where machines express error and humans express precision, the fertile world of glitch art thrives. Sacramento’s John Horton has occupied this territory for some years now, rendering the futurist lines of digital flaws in traditional paint-on-canvas works, weaving wildly new musculature atop the sturdy bones of a tried-and-true medium.

Steeped in the ephemeral and impious spirit of cyberpunk, Horton’s painting’s flit between different modes with the speed of a psychic TV channel enmeshed in the bionic viewer’s neural network. The variety unfolds in the ambient glitchscape of Foreign Tongues, the lysergically comical take on classicism in Reference the Future, and the sheer wet horror of organi-digitalization in Conflict and Savage Beauty. These paintings capture the emotional spectrum of a world that has just witnessed a formerly unknown cyberculture swiftly become everyculture in just a few decades. Whether fueled by the ecstasy of future potential or trapped in the scream of unstoppable metamorphosis, Horton’s works are artifacts of the technological and cultural upheaval occurring every nanosecond.

Some of his paintings, like the aforementioned Savage Beauty, explicitly reference the burgeoning art of 3D printing, a format that Horton has been mastering on his own personal printer. One recurring motif is the skeleton, specifically the skull—a structure molded in the world’s original 3D printer, and one specifically shaped to hold the painter’s most precious tools: the eyes. Horton has an instinctive trust in the viewer’s eye and what pleases it, and his creations reward the look for its own sake, drawing every ounce of color and enjoyment out of the subject. The handle of his online portfolio, “Hightech Lowlife,” is taken from William Gibson’s succinct description of the cyberpunk ethos. One could say that in Horton’s case, it also aptly describes the employment of cutting-edge techniques to sharply outline the surging landscape of the “lower” sensory world. It is the human edge of the paintings that truly place Horton proudly within a cyberpunk continuum.

Keeping his chops razor-sharp through commercial work and mural commissions locally and around the country, Horton is a dynamic character, as adaptable and tireless as his artwork. 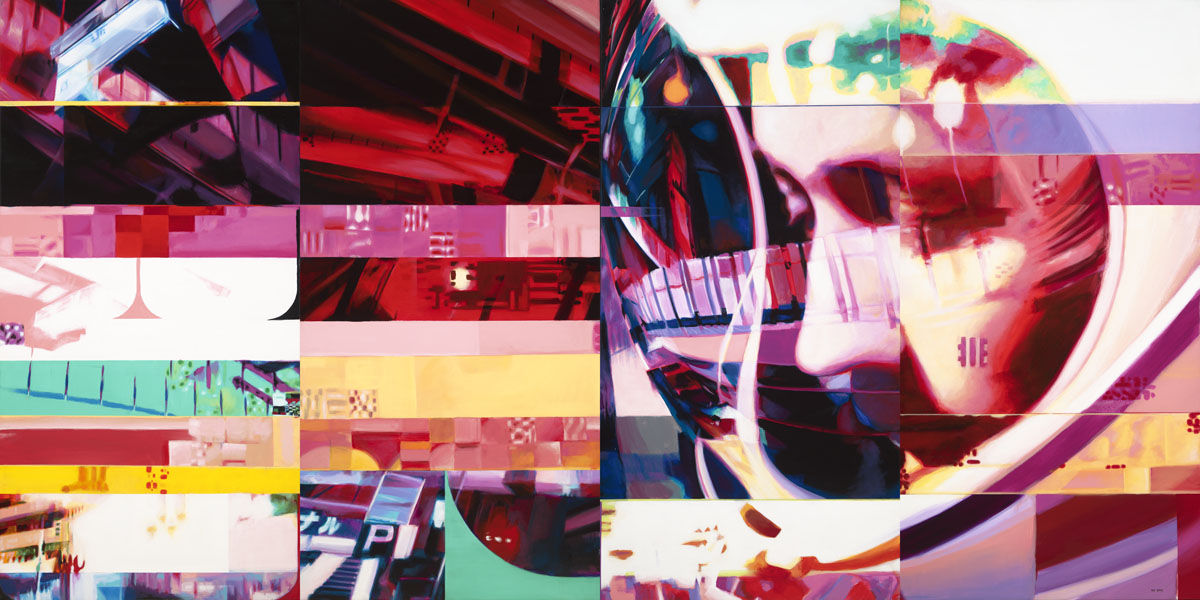 Let’s start with “Hightech Lowlife.” The term originally began as a descriptor for cyberpunk as a genre or aesthetic. What is your personal take on cyberpunk? How do you define it, how does it applies to your art, when/where did you first encounter it?
I’ve always been a fan of sci-fi and cyberpunk themes. Robotics. Cybernetics. Urbanization. Class warfare. Dystopia. Transhumanism. For me, cyberpunk is weird blend of romanticism for tech and a distaste for it at the same time. I first came across it in Japanese cartoons like Bubblegum Crisis and Ghost in the Shell … eventually finding Blade Runner, which led me to discovering Philip K. Dick and William Gibson in high school. I found myself getting into music like Autechre and Aphex Twin, Dieselboy. Japanese cars. first-person shooters. It all kind of went together. I was always into drawing, eventually painting, and the rebellious spirit and techno-romance of cyberpunk found its way into my artwork.

In 2005, I was uploading an image to my website and I mistakenly used the wrong unicode; the image showed up pixelated and distorted. “Beautiful,” I thought to myself. I spent the next few months perfectly rendering this “glitch” painting. It was a challenge so I kept going with it, corrupting files and painting the results. Over time, I realized that replicating the digital aesthetic and errors using traditional painting methods was somehow a critique on technology and society. Half of me embraces our advance into the future, but the other half is a Luddite who prefers an old-school airbrush over the Photoshop equivalent. 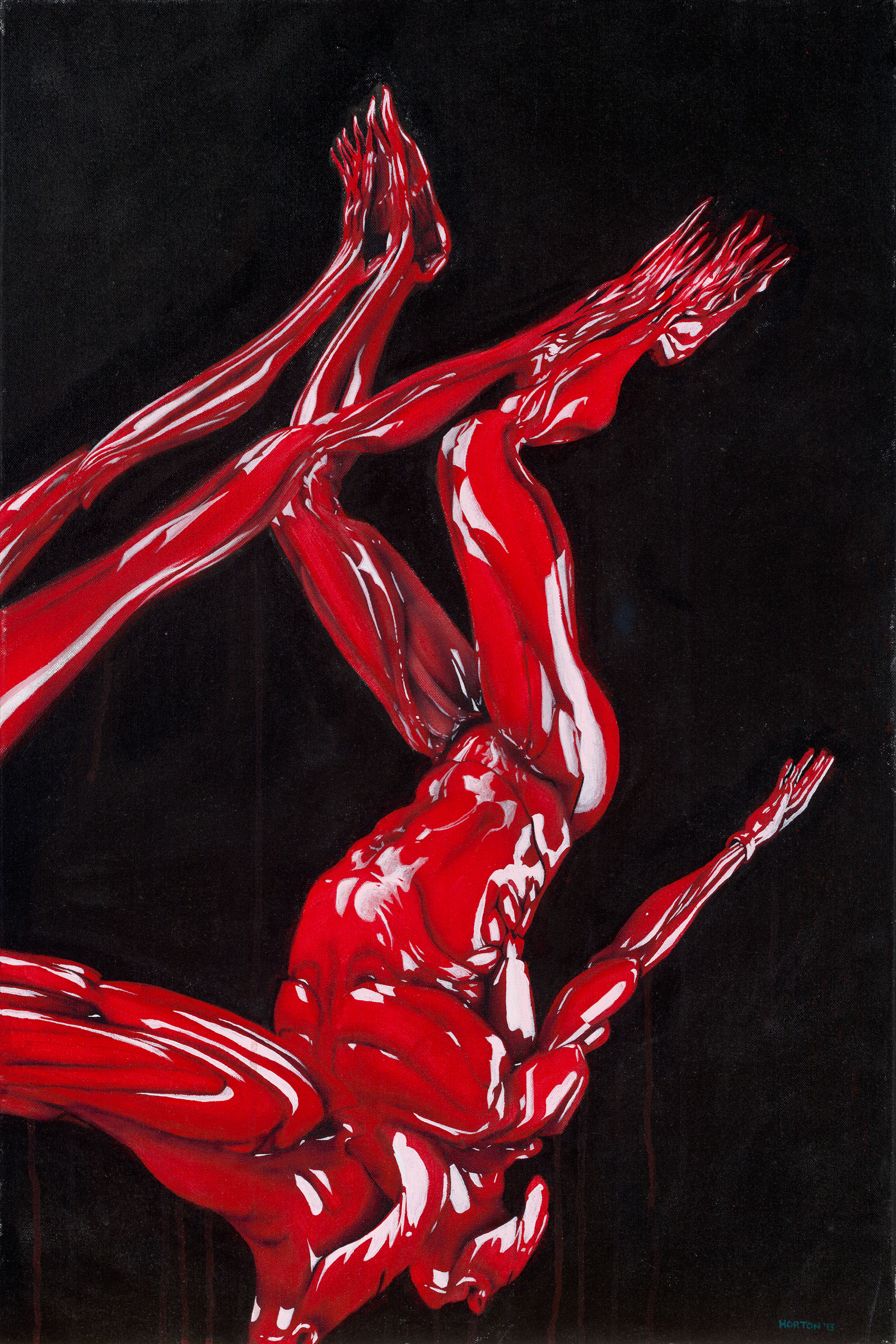 I’m especially drawn to the pieces Falling and Conflict—simultaneously visceral and ultra clean. They also seem to stand apart stylistically from the rest of your online portfolio. What ideas went into these?
Art is about escapism for me. I have always had this pull toward wanting to paint dark imagery and feeling guilty about it. That series of paintings was me working through some weird times in my life and wanting to create beautiful chaos. Tedious, cleansing work. I never planned to show them publicly, but after making a handful of them, that style has worked itself into my normal breadth of work.

Are you working on anything lately? What ideas are currently fueling you or your work?
Lately I’ve been trying to paint larger! More murals and bigger canvases. Something happens when you stand in front of large artwork. Right now I’m trying to push more chaos into my work. For years I made ultra-rendered, ultra-refined paintings, but recently I’ve been incorporating more large, messy, gestural brushstrokes to add contrast and spontaneity. 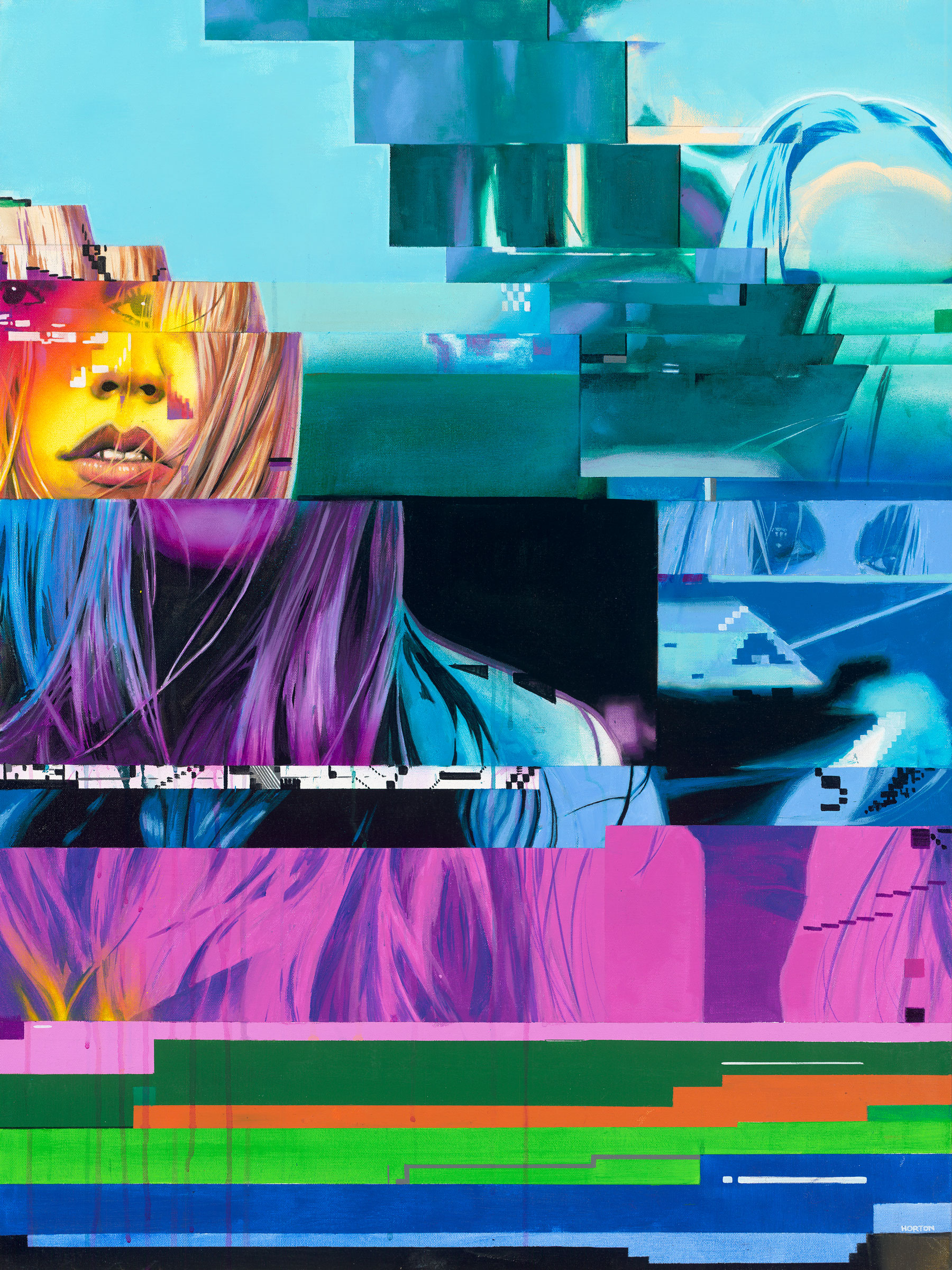 You’ve worked in 3D printer art for awhile. The technology strikes me as one of the most radical developments in art, among other things, in the 21st century. What’s your take on it and its potential?
3D printing changed the manufacturing process in a lot of ways. We can now make things at home—customized, unique objects on demand. I’ve had my FDM printer for five-ish years now and I can honestly say I would never live without one. I’ve used it to make small art sculptures, repair things around the house, even some custom motorcycle parts. The potential is endless! It has uses in the medical field, space travel, automotive, they can even 3D print lenses for glasses and telescopes.

Being highly prolific and experienced in both personal and commercial projects, do you have a process/routine for “getting your head in the game” depending on what each piece calls for?
Art is all I know now. I’m very passionate about my work, so I don’t really need to search for inspiration. Of course some commercial projects are harder than others to get excited about, but it’s the process that I enjoy more than anything. I’ve always lived by this quote from Chuck Close: “Inspiration is for amateurs; the rest of us just show up and get to work.” 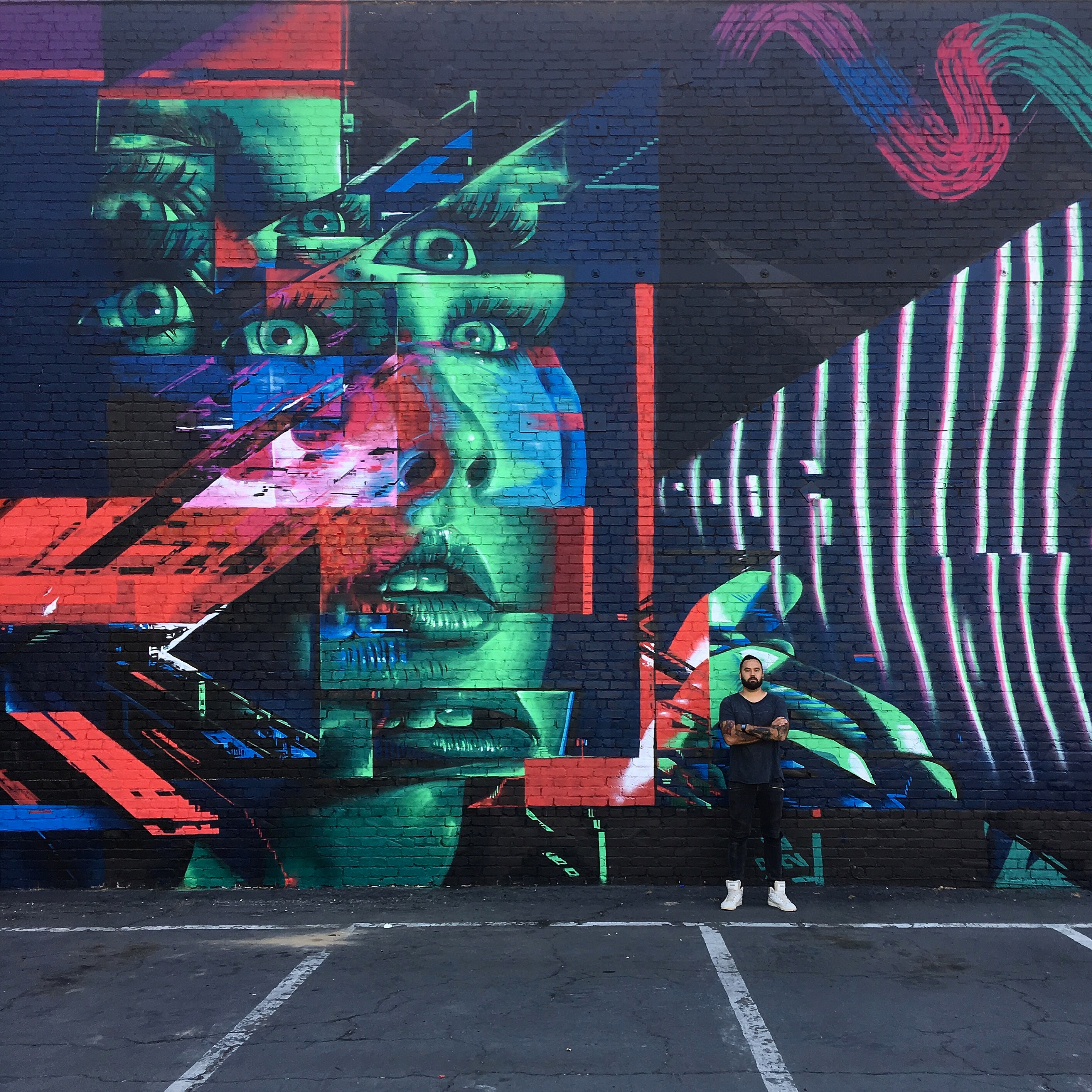 Do you have a favorite personal project? A favorite commercial one?
My mural for [2017’s] Wide Open Walls festival [at 20th and I Street] was a blast! It was great to have an opportunity to work on such a large scale and with so much creative freedom. I got to operate a 40-foot diesel boom lift, so I was stoked.

What is the most frightening thing about present-day cyberculture? Most exciting/intriguing thing?
Cyberculture is a crazy thing! 3D printing, VR, AR, “smart” stuff, automation and of course social media. Most tech advances I think are pretty cool, but some are definitely frightening. I’m most scared of the rapid rate of connectivity in new fields. Think of how much damage someone could do if they could hack your car while you were driving! Not to mention smart locks on homes, or how millions rely on medical tech to survive. Hopefully I’m gone before the AI uprising Musk and Hawking are worried about comes true. 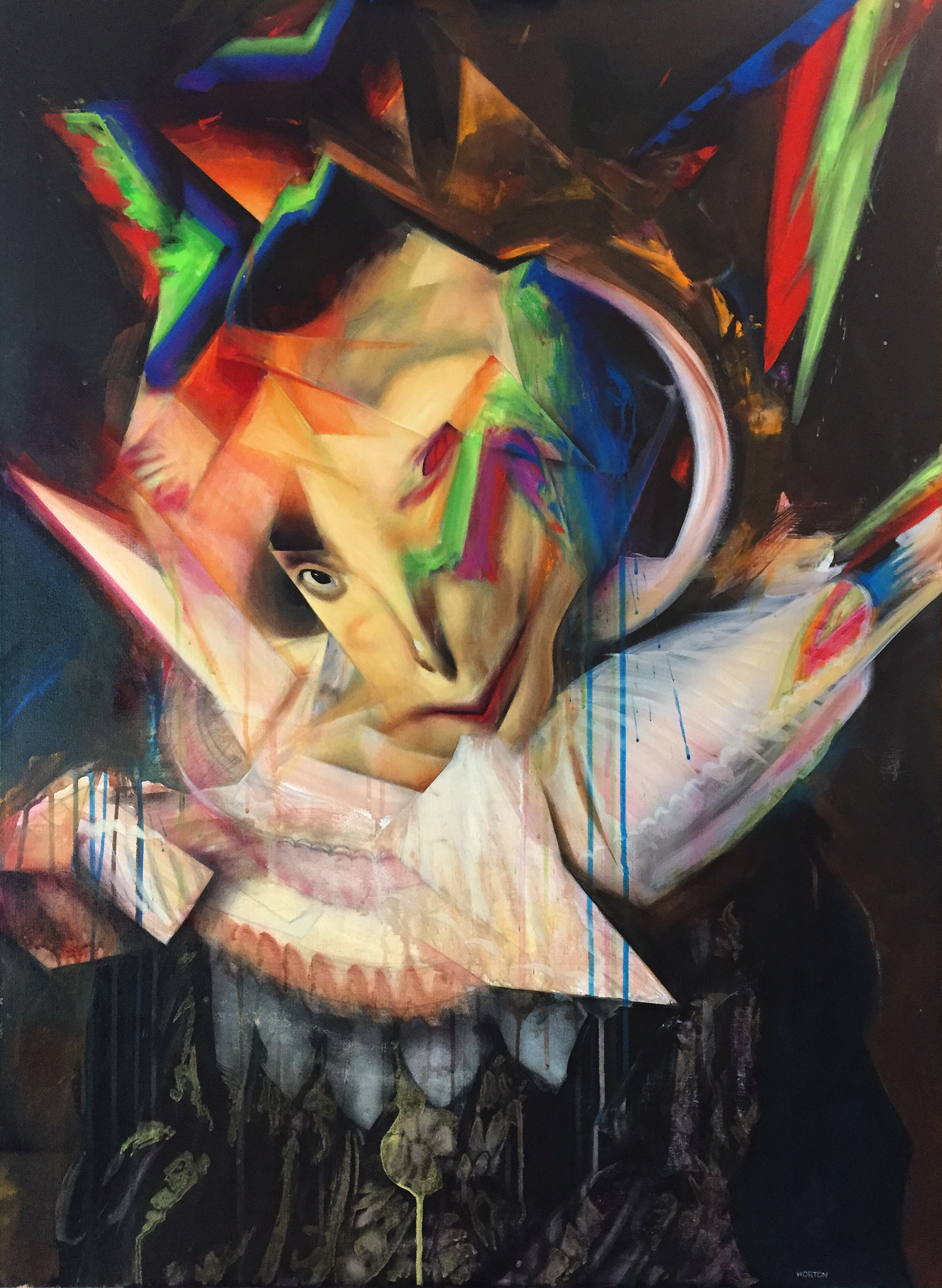 Keep up with artist John Horton by following him on Instagram (@Hightech_Lowlife). Horton’s latest exhibit, Beep Beep Boop, is on display Oct. 22 – Nov. 15, 2018 at the University Union Art Gallery on the Sacramento State campus. Opening reception is Oct. 25 from 6 – 8 p.m. Both the exhibit and the reception are free and open to the public. Learn more at Theuniversityunion.com.