Talk Scoop • Comedian Heather McDonald Dishes on Being a Mom, a Career Woman and a #MeToo Superstar 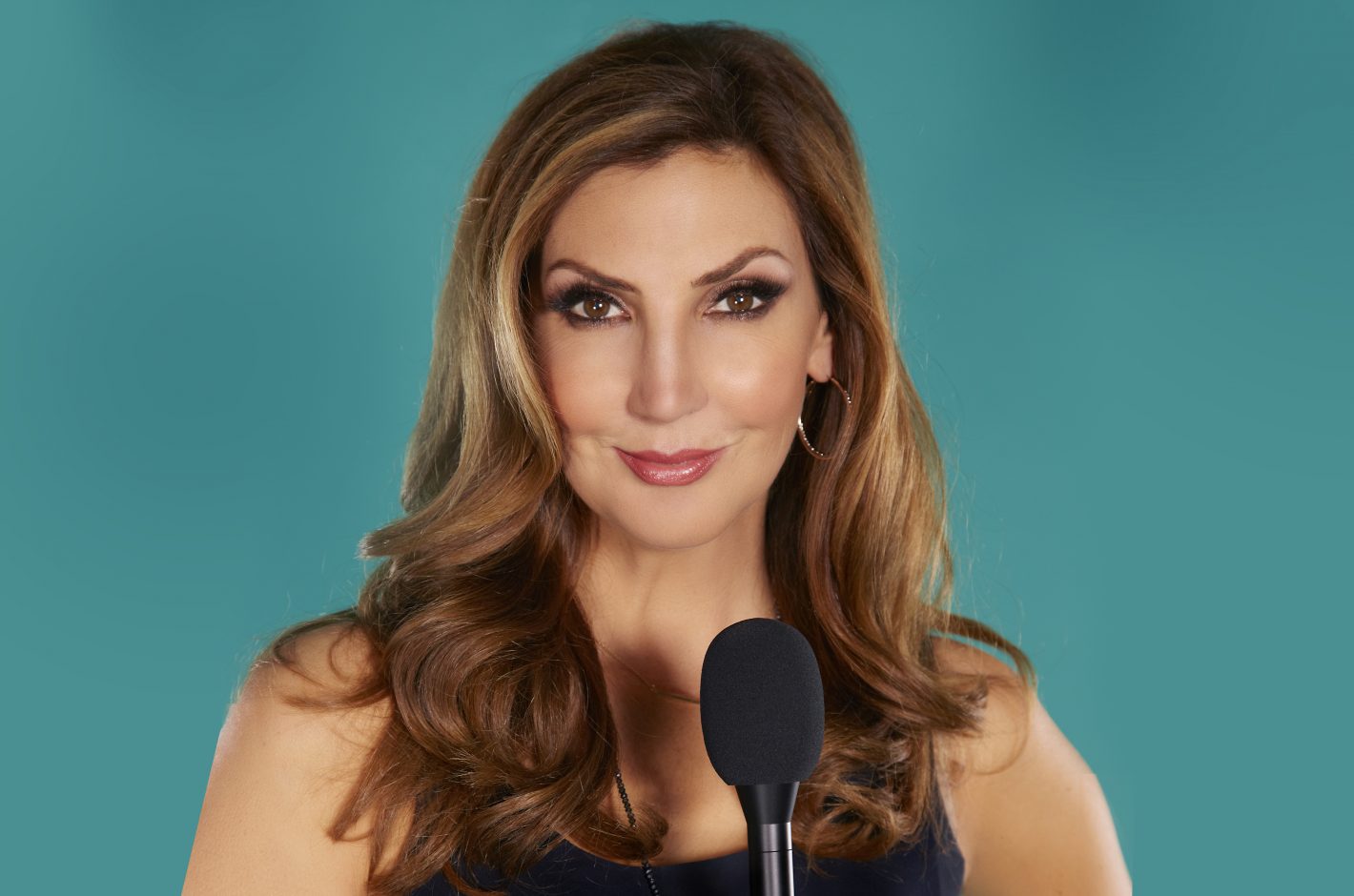 Heather McDonald has done some pretty cool things. She’s a comedian, writer, actress and podcast all-star. These touchstones are great and everything, but I’m going to put it out there first and admit that I’m completely biased here because the coolest thing she’s done was appear on one of my favorite episodes of Frasier. Particularly Season 8, Episode 13, titled “Sliding Frasiers.” McDonald’s character Judy goes on a really, really bad speed date with Frasier. Let’s just say she tells a terrible joke about pirates going to rated R movies (get it? Rated “Arrrrghh?”).

Frasier was not nearly as amused as I was, and continue to be, 17 years later.

But you’ll be happy to know that McDonald’s real-life jokes are much funnier than pirate jokes on a ‘90s sitcom. In fact, McDonald’s wildly popular podcast, Juicy Scoop, has collected a significant fan base, and has welcomed guests like Corey Feldman, Lance Bass (because why not?), Ali Wong and a full range of famous reality TV personalities I won’t pretend to know. She’s also written a couple of best-selling books, released a Showtime comedy special and was a staff writer and regular guest on Chelsea Lately. She’s been a celebrity guest on RuPaul’s Drag Race and Keeping up with the Kardashians, and has a Facebook army of more than 85,000 devoted followers.

And she did it all while being a mom and a wife of 17 years. Feel lazy yet?

“I didn’t pursue acting, drama or film in college because I was like, ‘it’s too hard to make it in this business,’ so I studied marketing,” McDonald says. “Luckily, I was fired from my first job so I was forced to reevaluate my life at 23. I realized it’s really important to pursue something you like. But you also have to be patient and realize it might take a while. As long as you’re enjoying the pursuit, don’t put a timestamp on it.”

McDonald went from performing stand-up, to sketch comedy, to a writing job and then writing books.

“Everybody’s life takes different paths,” she says, “but find that passion and pursue it—that’s what’s great about today’s technology. You can carve out a career for yourself. You can start a show online and create your own business.”

McDonald says that having the flexibility within her job helped her not only have a great career, but to be a great mom—and not because she stayed at home: She didn’t.

While she adores her 15- and 12-year-old sons, McDonald says you should never feel like you have to give up your career to be a great mom.

“Everybody thinks you have to stay home when the kids are really young, but I don’t think that’s actually the most important time,” she says. “I have more free time now, and I get to see my kids and pick them up from school. I almost didn’t take the Chelsea Lately job because they were so little at the time. But my friend told me, ‘You know, five years from now, you’re going to walk in the house and they’re not even going to look up from their Xbox and you’re going to wonder, why the hell did I give up such a great opportunity?’ And it’s true! They don’t come up to me and say, ‘Mom, remember when you missed my poetry reading in second grade?’

“I mean, it was hard for me to make those choices at the time, sure. But I think moms are always going to have more mom guilt than a man will ever have—but let’s all check back when our kids are 30 and see who’s really killing it.”

I tell McDonald it freaks me out when young moms use their kids as an excuse to duck out of their own lives and use their kids as their profile pictures on social media. She adds that it bums her out when she sees families with tiny babies on vacation.

“I enjoy taking my kids on vacations now,” she says, “when they can remember it. And roll their own suitcase.”

And when it comes to being a woman comedian in the modern day, McDonald does not shy away from her experiences, good and bad. In fact, she has her own #MeToo story: Her former boss at PodcastOne was caught on audio saying inappropriate things to her while she was trying to record an ad.

“He made my life hell, and finally I left,” McDonald explains.

After the infamous “Grab ‘em by the pussy” stunt heard ‘round the world, McDonald had had enough and decided to speak out. She played the audio for her audience and the response was bigger than she could have ever imagined.

“People were telling me I should sue, but that’s not what I wanted to do.”

McDonald explains that suing would only bring in money, and then she wouldn’t be allowed to talk about it anymore. She didn’t want money; she wanted change. The man in question, Norm Pattiz, was not only powerful in the radio world, but also a University of California Regent. After students heard McDonald’s story, many of them protested and eventually Pattiz resigned.

McDonald’s willingness to speak out caused a positive change for the students and removed a creep from the radio world, as well as the education system.

“And now they’re working to change the policy [that makes it impossible to “fire” a regent, no matter what they do] that’s been in effect for so many years,” McDonald says. “So I thought, wow, my #MeToo story actually changed a policy on the university level! I’m happy, that’s all I wanted. We shouldn’t be afraid to tell on people that do bad things to us.”

But remember, it’s not all serious; Juicy Scoop delivers on its promise to be fun, relatable and full of pop-culture goodness to get you through a boring commute or jog around Midtown. I ask McDonald who her favorite Scoop guests were so far, and who her dream guest would be.

“I’ve never met either of them, but I’d love to interview Oprah and Madonna! I’ve had so many great guests that have opened up and shared with me,” she says. “Like Kyle [Richards] from Real Housewives, Spencer Pratt from The Hills—of all people—and Suzy Favor Hamilton, who wrote a book about being an Olympic runner-turned-housewife-turned prostitute.”

Of course, McDonald loves when her fellow comedians join her show to cover general topics and keep things light, because at the end of the day, we all need something to laugh about. We’ll get the chance to laugh with her during one of her shows at Punch Line Sacramento, taking place Feb. 2 and 3.

What can we expect from McDonald’s show? She says she’ll be talking about her life, her marriage and her continuing perplexities with the online dating world of Bumble and Tinder.

“All that stuff really intrigues me; I’m somewhat envious sometimes,” she says.

I think of all the bad Tinder dates I’ve been on and tell her, with confidence, “Oh, Heather McDonald, please don’t be.”

There will be impressions and general commentary on reality stars, McDonald says.

“It’s dirty-esque and I use bad language. But it’s really fun and high energy.”

I tell her that sounds cool, but I ask her—for the sake of Sacramento—please don’t perform any public stunts that might get her show cancelled (thanks, Kathy Griffin) before she arrives. She tells me not to worry; the only confrontations that happen at her shows involve people (usually, overly eager ladies) going too deep into the sauce and getting asked to leave.

“Usually I’ll get an email the next day from the gal saying she’s embarrassed, and I tell her, ‘Oh girl. Don’t worry. We’ve all been there.’”

And so we have. Drink responsibly, darlings, and get ready to laugh.