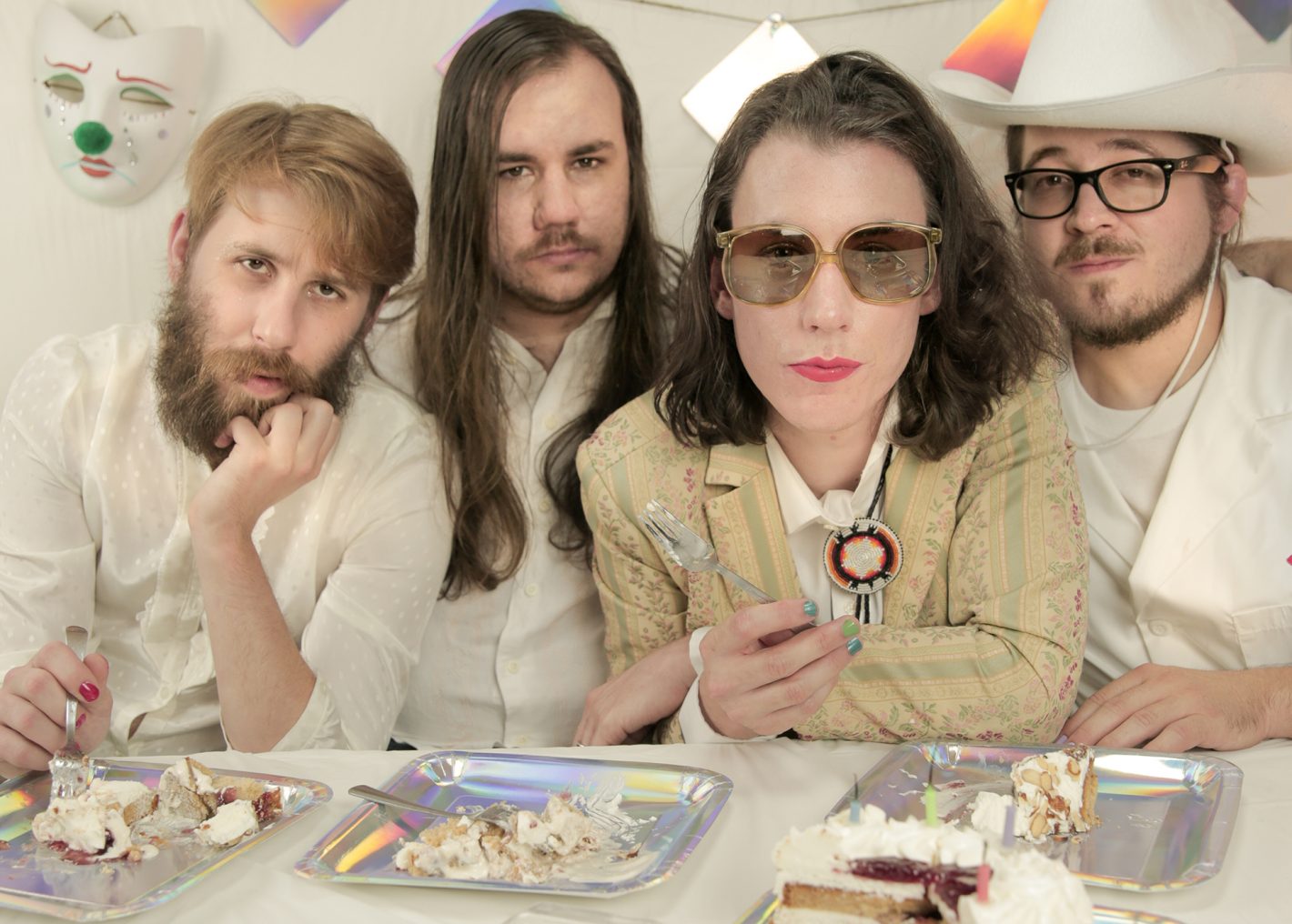 For the Hoffman brothers (Mason and Spencer), it was nigh about time to pull up stakes and head north to Portland. Spencer, the younger of the two, had already started school there; their band, Honyock—rounded out by bassist Tyler Wolter and drummer Christian “Sunshine” Meinke—was pumping along into their eighth year. It had been almost three years since the group’s last release, a demo EP of compellingly sinuous “peyote-tonk” numbers that were nevertheless waiting for some kind of catalyst—the sort of fire that might bring forth the ashes to polish their sound to a silvery patina.

What happened next was a mini-miracle in indie rock serendipity. From the time they were upstart novices listening along in their room to Dr. Dog and other artists on Park the Van Records, the brothers had nurtured a dream of wedding their own work to a similar roster. Now, their demos had fallen into the hands of former Park the Van label heads Chris and Sabrina Watson, who had set down roots in Sacramento a few years back with a new label, Friendship Fever. Before long, Honyock was headed down to Elliott Smith’s former L.A. studio to record with songwriter/producer/frequent Father John Misty collaborator David Vandervelde.

The result of a dream made manifest, El Castillo (out July 20) serves as the band’s debut LP, part stylistic rebirth and part distillation of every quirk and feature that has made Honyock distinctly appealing since they first appeared. Nimble songwriting with a playful pop sensibility is allowed to breathe in the loose-feeling structures of ballads and power-pop suites, imbued with the fractured grandeur of ‘70s guitar rock and glazed with the clean shimmer of ‘60s optimism, though it’s not without a minor touch of wistfulness to make the melodies bittersweet. Lead single “Patron” is the purest example of this, depicting the foolish hopes of trying to break through a loved one’s addiction to save them, the frustration when it fails and the lingering pocket of happiness in thinking that, in some universe out there, it could work beautifully. Honyock regularly dips into serious territory while avoiding the theatrical pitfalls that can derail truly thoughtful handling of the subjects covered. They’re a group that can use artifice without becoming a background to it.

Finally, there’s the name itself. It’s a word to chew on, suggestive of dust-choked horizons under a limitless dome of blue sky, of times, places and ways of living written down in books that have long been shut. Honyock came to Mason and Spencer from their grandfather. It’s an archaic Americanism that has generally passed into the oblivion of the rural past, with several ambiguous meanings. For the brothers, it meant something along the lines of “mischievous” or “up to no good.” An older definition translates to “honey hunter,” someone searching for golden opportunity—in the usual case, stubbornly tilling land too barren to farm—and getting “stung” in the process.

Far from tilling barren ground, Honyock have claimed an out-of-the way territory to cultivate their own unique musical sensibility, laboring for friendship, brotherhood, honesty and the sheer joy of the process, far from any fame or treasure-seeking notions. If their profile is rising now, it’s at the best possible time. The unfamiliar listener has much to discover in their work, now enriched by time, the evolution of their artistry and the strength of their bond.

Catch up with Mason and Spencer to get a sense of the state of the Honyock union as we approach the eve of their album drop. 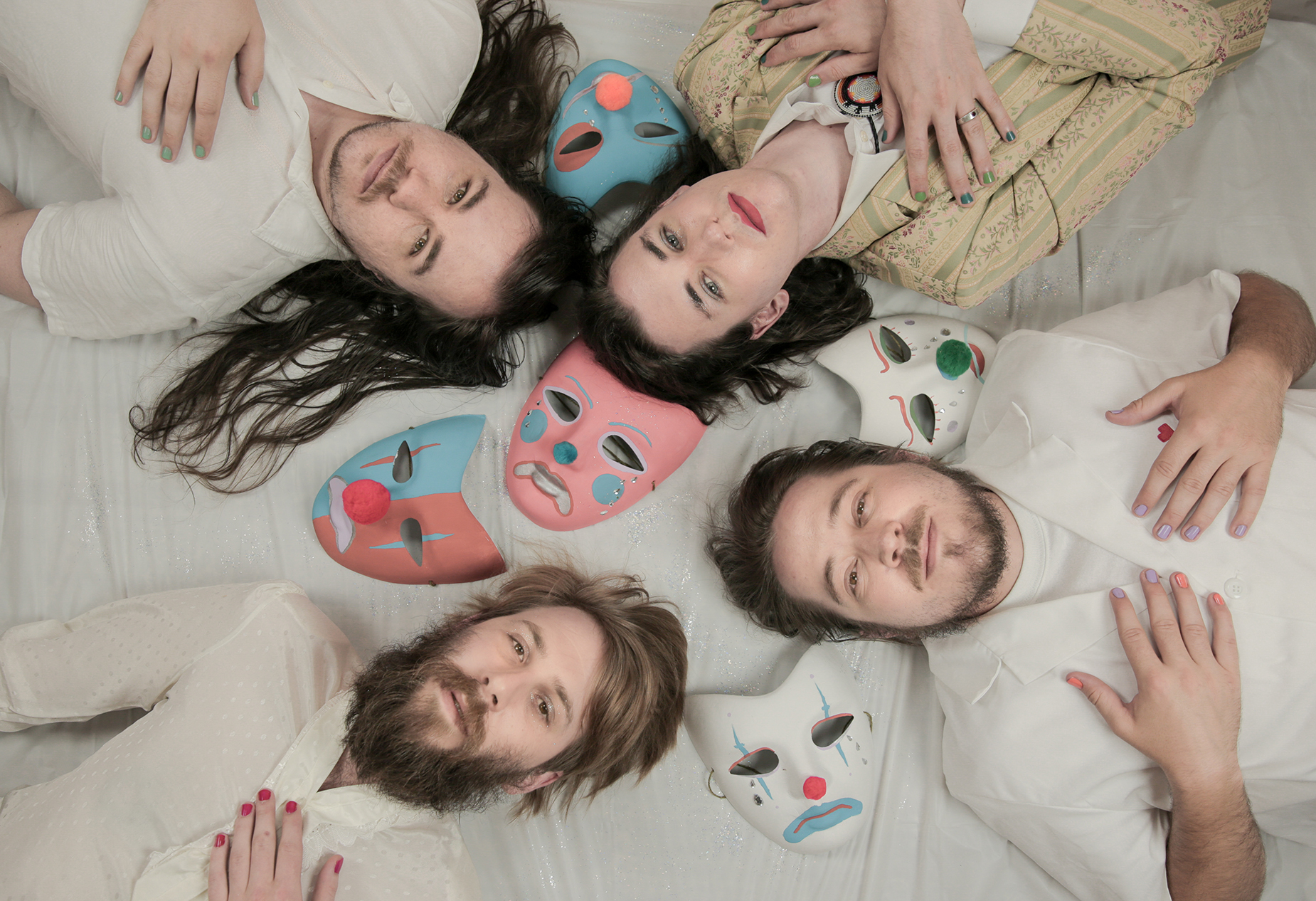 When did Honyock first come into being?
Mason Hoffman: June 19, 2010 was our first show. We’ve been together a little over eight years now
Spencer Hoffman: We’re kind of like a glacier, you know? Just slowly, slowly moving along.
MH: Like a glacier, too dumb to quit.

How would you describe your musical upbringing?
SH: Speaking just for me and Mason, we grew up in rural parts of California—Jackson and Pine Grove and Volcano—and we spent a lot of time up there. That’s where we were born, up in the sticks there. We had two instances where really important family members had old, beat up Toyota pickup trucks with broken radios. Our grandpa had this red Toyota, and he’d sing Roger Miller to us while tapping on the steering wheel, like “King of the Road.” And our dad—he also had a busted radio at some point—he’d sing Willie Nelson and all these old country tunes. We developed this relationship of singing along, and in order to not walk on each other, vocally, we’d sing harmonies.
MH: Growing up, Spence and I moved around quite a bit. I think that forced us to grow up close, ‘cause that’s like your friend, you know? Because you don’t know anybody once you get to a new town. I think that fostered that outsider perspective in a lot of ways, because it was me and him against whatever new challenges we were facing as kids growing up—having divorced parents, always moving around, just trying to make sense of all that. I think there’s always been sort of an us-against-the-world ethos with me and Spence. I think the whole band has sort of adopted it.
SH: We’ve gone through a lot of iterations; it’s been me, Mason and Tyler the whole time, and Sunshine has been there longer than not. But it took awhile to finally find Sunshine, because me, Tyler and Mason have such a brotherly bond that we went through a bunch of extra musicians in order to figure out who was the right fit. We don’t get any inspiration from the caustic, immature sort of band mentality where it’s like some sort of movie, and everything’s so dramatic. Everything with us has to be communicative and loving in order for us to get the work done and feel good about it. And we’re lucky enough to be able to have that.
MH: It’s funny, because we’ll get back from tour, and I’ll be hitting up Spence a couple hours later, like “What are we doing later?” It’s not like I get tired of these guys.

“Patron” has some really hard-hitting themes for such a pretty song. What’s the story behind it?
SH: For the music, it was based off of a little jam between me, Tyler and Sunshine. Then I went home and I was in the middle of a couple of converging kind of circumstances with some close friends, some distant friends, some friends-of-friends. I was musing off of these sort of beautiful people that I considered to be some of the nicest, sweetest people I’ve ever met—some of the most present, engaging people that I’ve ever met—and their propensity to be drug abusers, especially of opiates. In Sacramento, opiate abuse is extremely problematic; it’s kind of had a resurgence from when we were coming up in the music scene. It was just really heartbreaking. As someone who wants to see these people get out of that cycle of addiction, you have a very altruistic feeling of, “Let me help you. If you just surrendered I’d be there in a heartbeat to do anything for you.” But simultaneously, that creates some resentment, because all of a sudden, you start thinking, “I want to help you, why won’t you accept my help? This is your fault.” I think both ways of feeling about it speak more about me than the people that are suffering from the addiction. That duality of emotion is really present for me. So the song naturally spun out of that.

The band has a keen ability to mix uplifting, soothing melodies with downbeat lyrics, or even the theme of depression, as on “Man in Need.” How do you feel about that theme becoming more of a focus in popular music?
MH: I mean, it’s encouraging, but it’s difficult not to be skeptical. Like, do you really feel that way, or are you just Tumblr sad? The whole aesthetic, like, “Kill me, I’m sad.”
SH: Which is very offensive to people who are dealing with that kind of depression, when people put it on, and that’s a little upsetting. And it’s not inspiring.
MH: I try to be as happy as I can. I definitely don’t court my depression or dance with it intentionally. We’ve seen a lot of musicians in town and otherwise burning out, because to them, they have to be sad, or be in a tumultuous place in order to create.
SH: When you’re actually depressed, it’s not inspiring. And it’s not conducive to writing. In that kind of situation, you don’t have the perspective to write about it.
MH: Usually there should be a cycle; a cycle of going through something and then gaining perspective on it and learning from it. But if you’re always going through something, then you’re never learning from it, like you never learn when you’re talking.

Although you’re eight years in, does the debut LP feel sort of like a reintroduction or rebirth?
SH: It kind of feels that way, like this is the first chapter, and everything else has been a prologue. This definitely feels like a fresh start. We have learned so much from the process of recording El Castillo, more than we’ve ever learned in however many previous years, and we’re just kind of ready to hit the ground running. Through David Vandervelde, we learned how much we didn’t know; watching the studio people work, it was just flabbergasting. Being able to pick out a phaser issue from the back of the room, not even having to pay attention. It was incredible to see; I don’t think we realized the artistry, like a painter who uses certain techniques to bring things to life. And with everything else, working with a label we really love, and touring the U.S., it’s all very fresh and novel for us.
And we know that the world isn’t going to start raining puppies and diamonds and free money when our record comes out, but we’re just excited to work on it, continuing to work at it, making more music.
MH: This is just the beginning. A lot of bands get a deal and think “we did it.”
But we just did the first part. Now the work begins.
SH: We’re making music whether people give a fuck, listen to it or not. The fact that we’ve been a stick in the mud long enough for someone to notice that we’re there. The only thing that’s in your control is trying to be true to yourself as an artist and being a nice person. Being a good friend, making art that you want to make. We’re very fortunate to have made some really great friends that have helped us out. That’s why we named the record El Castillo, after our friend Tommy.
MH: Tommy’s kind of the lynchpin of it all. He, unbeknownst to us, was sharing our music with this label. None of us would be sitting here, or planning to do what we’ll be doing in the future, without his strange kindness.

A dream label, a dream record and dream friends to make it happen. So in a way, it really did start raining puppies and diamonds?
MH: Just about as close as you can come to that, for us. I guess that’s why we’ve tried to keep working hard all the time, because it still doesn’t feel normal. Now we have to take it as far as it’ll go. We’re pretty far away from the wall now. We’re swimming.

Shower in the spectacle of Honyock’s raining puppies Saturday, July 28, 2018 at Harlow’s (2708 J St.) during their official album release show! Opening will be Doombird, and Tre Burt. Tickets are $10 in advance, and $12 day of show for those 21 and over. Doors at 8 p.m., show at 9 p.m. For more info on Honyock, visit Honyockisaband.com.