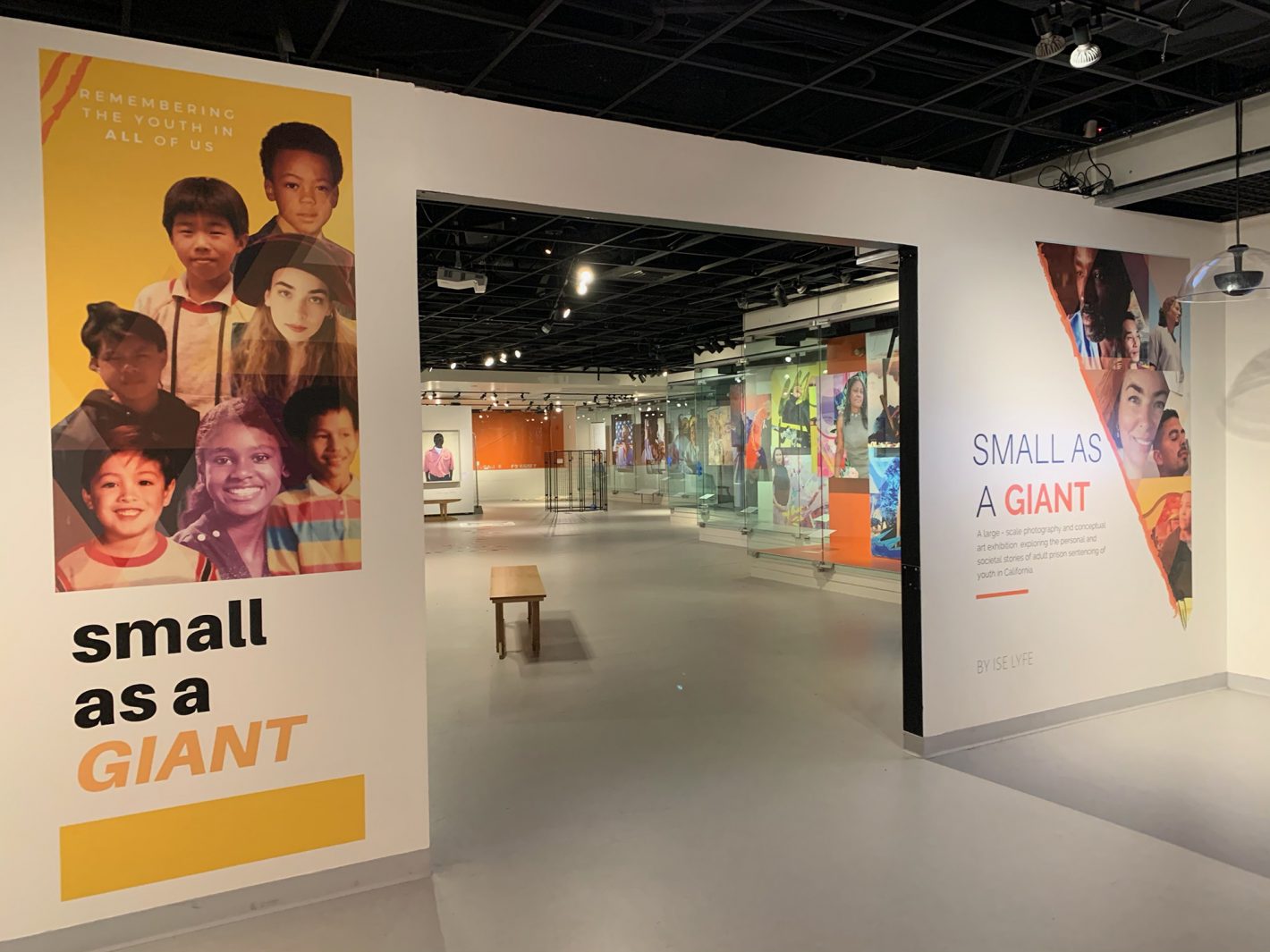 At the far end of a large exhibit room on the second floor of the California Museum, a child’s voice plays with subtitles on a dark screen. He talks about life in solitary confinement and how the prison guards don’t take his ankle irons off even to take a shower.

Perhaps if he were present, it would have been difficult to make eye contact. Yet several “lifers”—or people sentenced to 20-plus years to life in prison before they were 18—shared their experiences at the opening of the multimedia exhibit by artist Ise Lyfe called Small as a Giant, and it was hard not to watch them and want to hear more. And to want to do something positive to help after hearing their stories.

Ke Lam, reentry coordinator with the Asian Prisoner Support Community (APSC) and one of the subjects in the exhibit, says he does his work to save other young people who are immigrants and didn’t know they could lose their resident status after doing time.

APSC provides direct support to Asian and Pacific Islander (API) prisoners and raises awareness about the growing number of APIs being imprisoned, detained and deported. Lam, a Vietnamese refugee, was sentenced at 17 and served a prison sentence at San Quentin. ICE detained him after his release from prison, but he was able to remain in the United States.

“My job is to stand up and give voice to the voiceless,” Lam says.

The focus and impact of child imprisonment in poor communities and communities of color in America is a central theme throughout the exhibit. As participants walk through the exhibit hall, they are hit with facts like, “For every one white youth, there are 4.5 Latino youth, and 11.6 Black youth facing prosecution as adults.”

Lyfe doesn’t shy away from this country’s long history and repercussions of child imprisonment, laying out key dates and facts both on the Small as a Giant website and in the exhibit itself.

“A starting point is for us all to admit that we are afraid of children, and we are particularly afraid of black children and brown children because we see them as monsters. To be honest with that is a starting point,” he says. “The juvenile justice system began as a way to deal with America’s wayward white youth. In the mid-1800s when it started, there was no concept of what we now call a Latino immigrant or people living in the projects of East L.A. Black people were enslaved, and natives were imprisoned. Now we see a black kid with a gun, he is labeled a gang member or a terrorist. But when a white youth does it, he must have a mental illness, otherwise it’s out of his nature to be violent, which isn’t true. It wasn’t until the Emancipation Proclamation and the influx of Latin Americans and Asians and the issue to control the children of these new populations that we see mass incarceration. It becomes a kennel for children.” 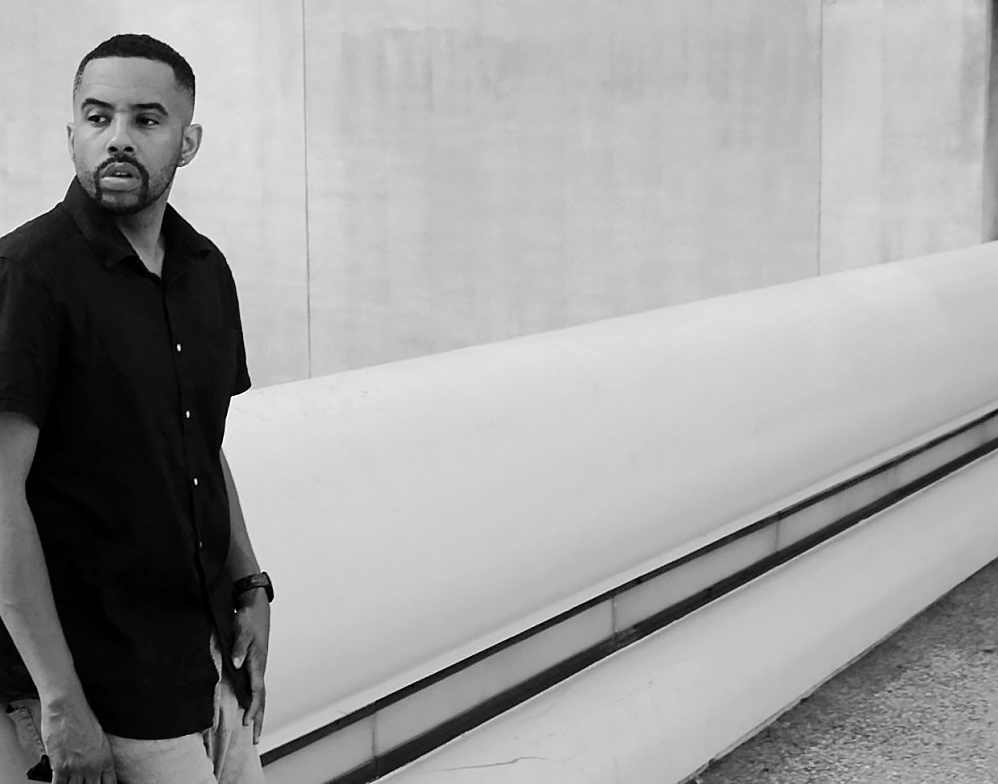 Lyfe’s goal is to shed light on this human rights issue, support communities to better understand the plight of children in the justice system, and to move people to act and to protect children, our most vulnerable members of society. Lyfe hopes the project will be used as a tool and statement to influence and empower voters, communities, politicians and stakeholders to change attitude, policies and laws.

“If you’re on the wrong side of this issue, you get a lot of flak,” Lyfe says. “But if you’re on the right side, you often don’t get the attention. This is to show there is someone who did pardon someone, voters who voted in a certain way to help and people can go and see that and be part of that history.”

Lyfe is one of the leading spoken word artists in America, as well as a justice advocate, author and lecturer. Originally from Oakland, he now resides in Los Angeles and has done projects on other human rights issues such as housing (look up Brighter than Blight, 2013, exhibited in Oakland).

“I was unaware, as someone who has been in this work for 20 years, that children were being sentenced to life in prison,” Lyfe says about why he decided to take on the subject. “If I wasn’t fully informed, there are probably people throughout the state and beyond who didn’t know about the issue or how to get involved. That’s what initially sparked it.”

Lyfe says what stood out wasn’t just an individual case, but this realization after speaking to juvenile “lifers” that in the late ‘90s the justice system was egregiously giving children life in prison.

Lyfe captured more than 50 stories through photography, audio and narrative. “I knew I had to think about where it was going to go up,” he says of the vast multimedia exhibit that has now traveled to several cities across California. “I knew we were going to go inside institutions and community spaces. I determined how we would build it physically, and then I knew what stories I could tell. Most people are coming from a space of trauma, so when we came in talking to people on the inside, I decided I was going to take photographs of the child even inside the adult. We worked together to capture them in a really vulnerable, really youthful state. For anyone who was willing to be vulnerable, they went in knowing that was the environment we were going to take this in.”

Lyfe notes that he’ll be taking the exhibit to San Quentin Prison, along with feedback from the shows, so the subjects of the photographs can see and hear how it’s going on the outside.

Beyond visiting the exhibit, which runs through March 15, Lyfe says the simplest thing that he encourages people to do is to be part of the conversation.

“If you’re a teacher, talk to your students about it,” he says. “I was in first grade in 1989 and graduated high school in 2001. Through that time none of my teachers talked to me about the crack epidemic, and that’s just odd. It’s the equivalent of going to school in Cambodia in 1968 and not talking about the war.”

Lyfe adds, “And even if you’re in your job—a garbage person, a firefighter—find out what your policy is of hiring formerly incarcerated people. Your argument and debate should be informed. I understand if you land on the side of still believing a young person should be imprisoned for a certain crime, but sit through the exhibit first.”

Lyfe notes that Small as a Giant is also an avenue for people to get connected to the various organizations around the country that are already engaging in reform, advocacy and helping people on the inside—everything from support groups to people creating care packages and writing letters to the imprisoned, to movements for providing feminine hygiene products to girls and women who do not have access in prison.

California State Senator Nancy Skinner (D-Berkeley) introduced Senate Bill 889 on Jan. 28, which would raise the age that young people in California are tried as adults to 20 from 18. This new legislation comes on the heels of several bills passed over the last few years in California that have helped incarcerated youth.

Lyfe says another big issue being considered is not handing down life sentencing for anyone under 25, on which he feels more moderate, and understands if people are on the fence. 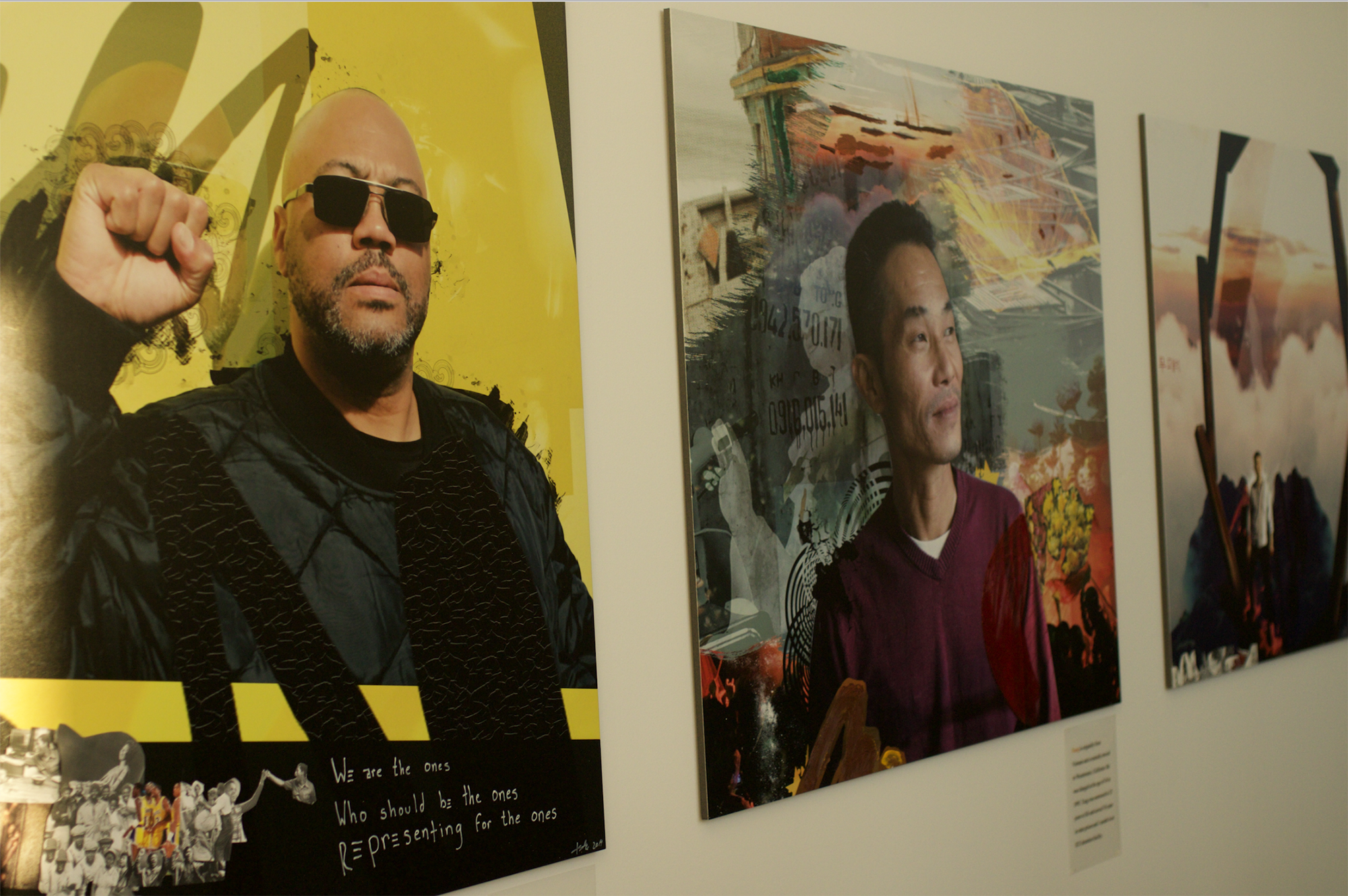 “I hear a 22-year-old gets life in prison and she committed murder when she was 22,” Lyfe says. “When you hear about her getting life, it seems maybe even sensible to some people. But I have witnessed the reality, and I have sat next to a woman who is 70 and is still in there. Do you think after 50 years she shouldn’t have the right to go home?”

Small as a Giant shares the many laws that have passed to help decrease youth incarceration across the country and in California, and Lyfe is quick to note that progress should not be downplayed.

“I think Californians may say, ‘Look how progressive we are, look how liberal we are,’” Lyfe says. “The whole time I was growing up, California was a Republican, conservative state that was tough on crime. The way people voted on everything from affirmative action to housing to crime was conservative. What we are seeing through one generation of experience is a shift in the hearts and minds of the people who are part of the seventh largest economy in the world. It is a positive shift in history. We were not always this way. And when we look east and west, north and south to other states, we share that story of California. It was something we grew into and not something we naturally had.”

Lyfe plans to take Small as a Giant on the road to other states. He says in California, people who see the exhibit generally have a moderate to liberal perspective on the issue, but he has found that some states are 100 years behind.

“There are some states that have banned life in prison but the judge will give 120 years,” he says. “This is our work and our plan is to become a national model of what’s possible.”

Join the conversation. Visit Small as a Giant at the California Museum in Sacramento through March 15, and at Smallasagiant.com.