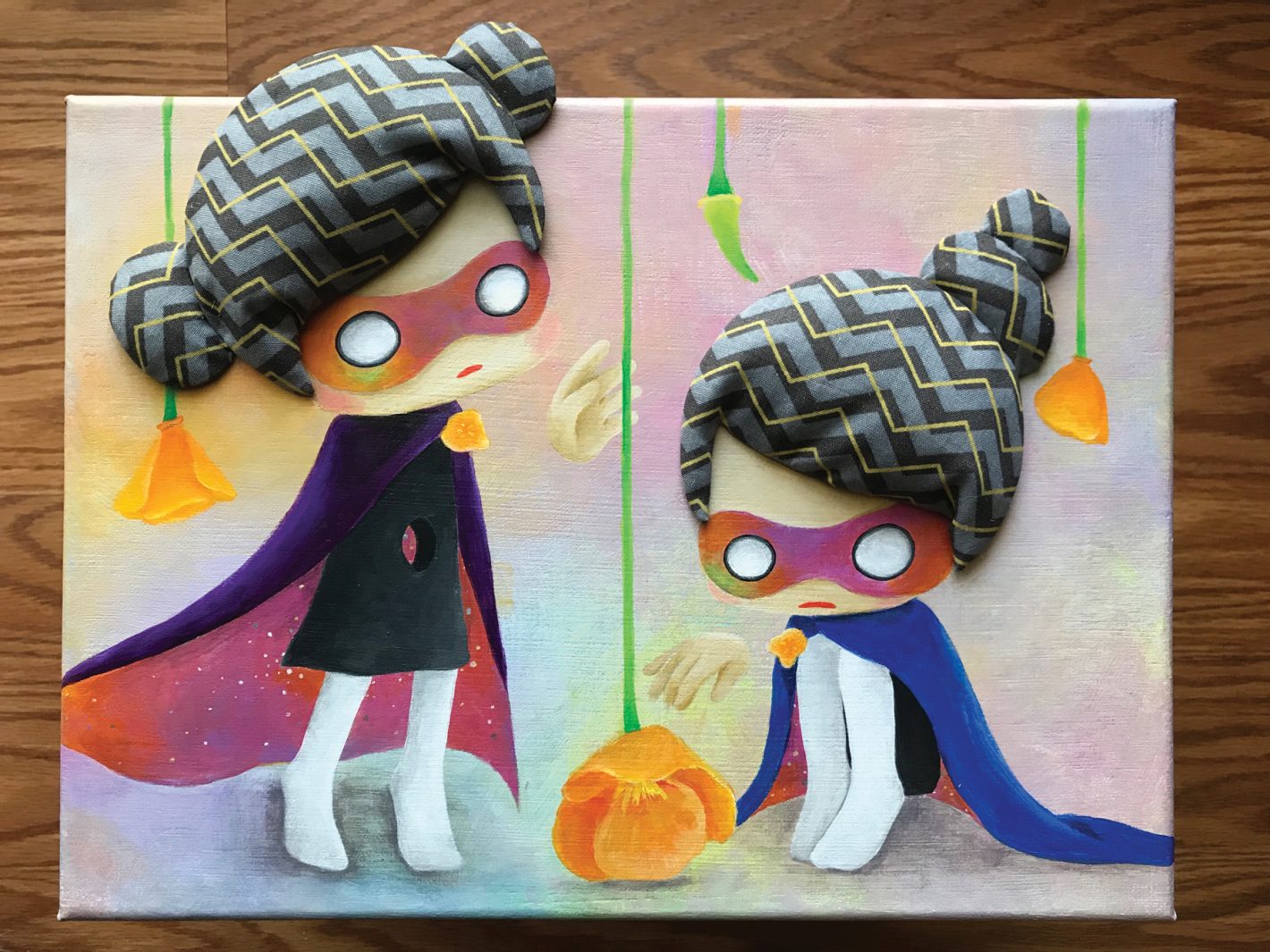 Julie Okahara lives in her own world. The phrase “neither here nor there” often refers to something of little consequence, but in Okahara’s case, it’s the best way of describing who she is and what she does.

Raised in Osaka, Japan, Okahara always had a notebook on her, doodling into it and copying comic book characters. She attended a high school that specialized in graphic design, which, though she enjoyed it, didn’t offer her enough freedom to express herself.

“It was creative, but within rules,” says Okahara. “I don’t like rules.”

Okahara was looking to add another dimension to her life and her art. Eager to travel and see the world, and with the benefit of having taken English classes in high school, she moved to the United States in 2005. She spent some time on the East Coast in the New York City area, visited family friends in Chicago and Michigan, and then settled out west, where she enrolled in an art program at Sierra College in Rocklin, California.

At Sierra, Julie took classes in many different art forms—more graphic design, canvas art and sculpting. In sculpting class, she formed a relationship with Johnny (now her husband of 10 years), as well as a clearer picture of what she wanted to do with her art.

“I really liked sculpting, but I just didn’t have anywhere with enough room to do it in,” explains Okahara. “That’s why I started trying to do 3D stuff on canvas.” 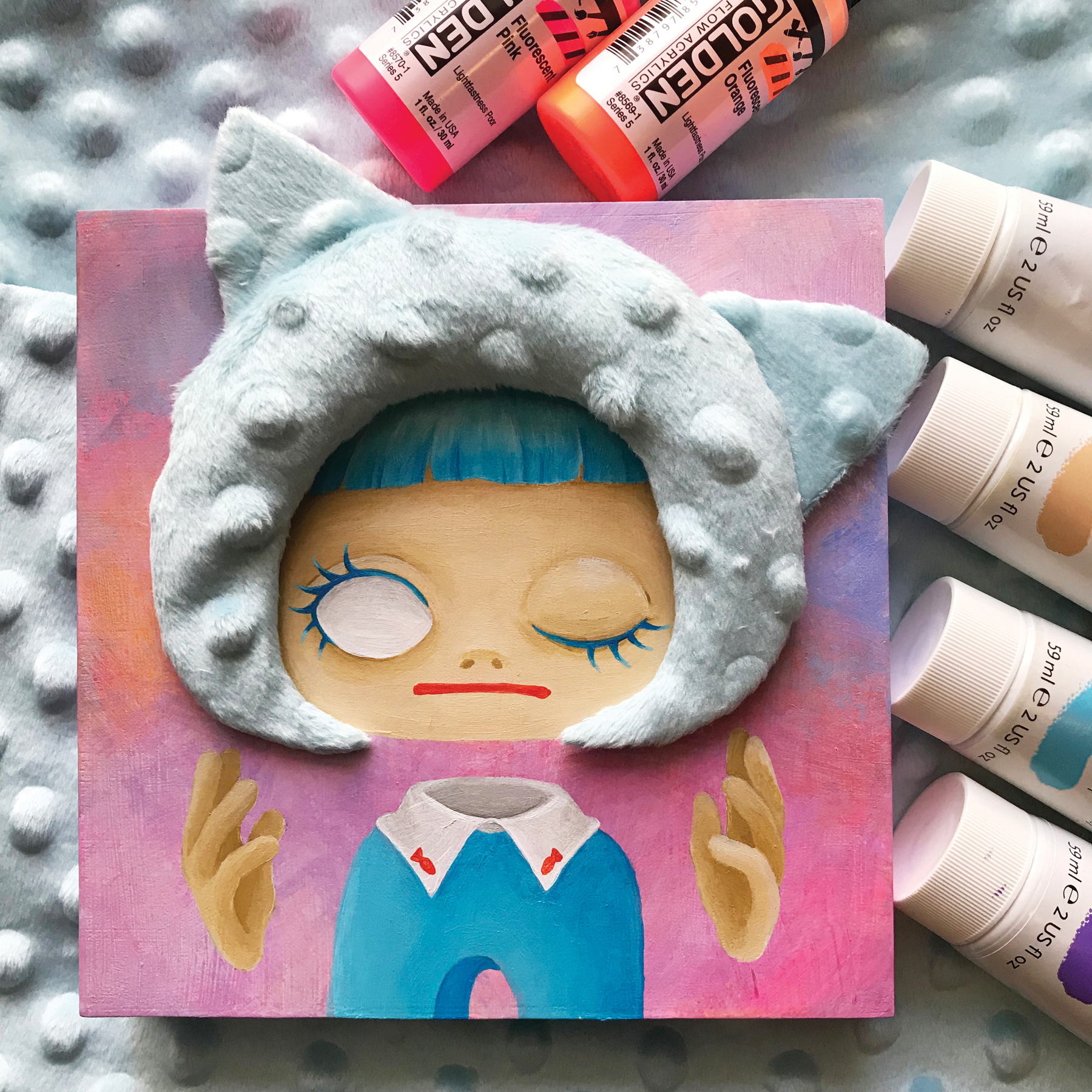 Okahara started using fabrics on her canvas—“puff stuff,” as she calls it—as well as textured or colored paper cutouts, on top of either acrylic painting or watercolor and ink.

“I like creating positive and negative space on two-dimensional surfaces,” says Okahara.

After graduating from Sierra with an associate degree and moving in with her husband, she began operating out of the front room of their Rocklin condo. Though she’s now spent roughly half her life in Japan and half in California, neither place defines her art, but both inspire it. Perhaps as a result, that leaves Okahara’s art somewhat in between worlds.

“I can’t really explain my style,” she says. “I show at comic book shops, but I’m not a comic artist. I go to conventions, but I’m not a convention artist. I’ve shown at galleries, but I don’t do ‘high-end’ art. I just need to find my …” she trails off, as if even this can’t be defined. 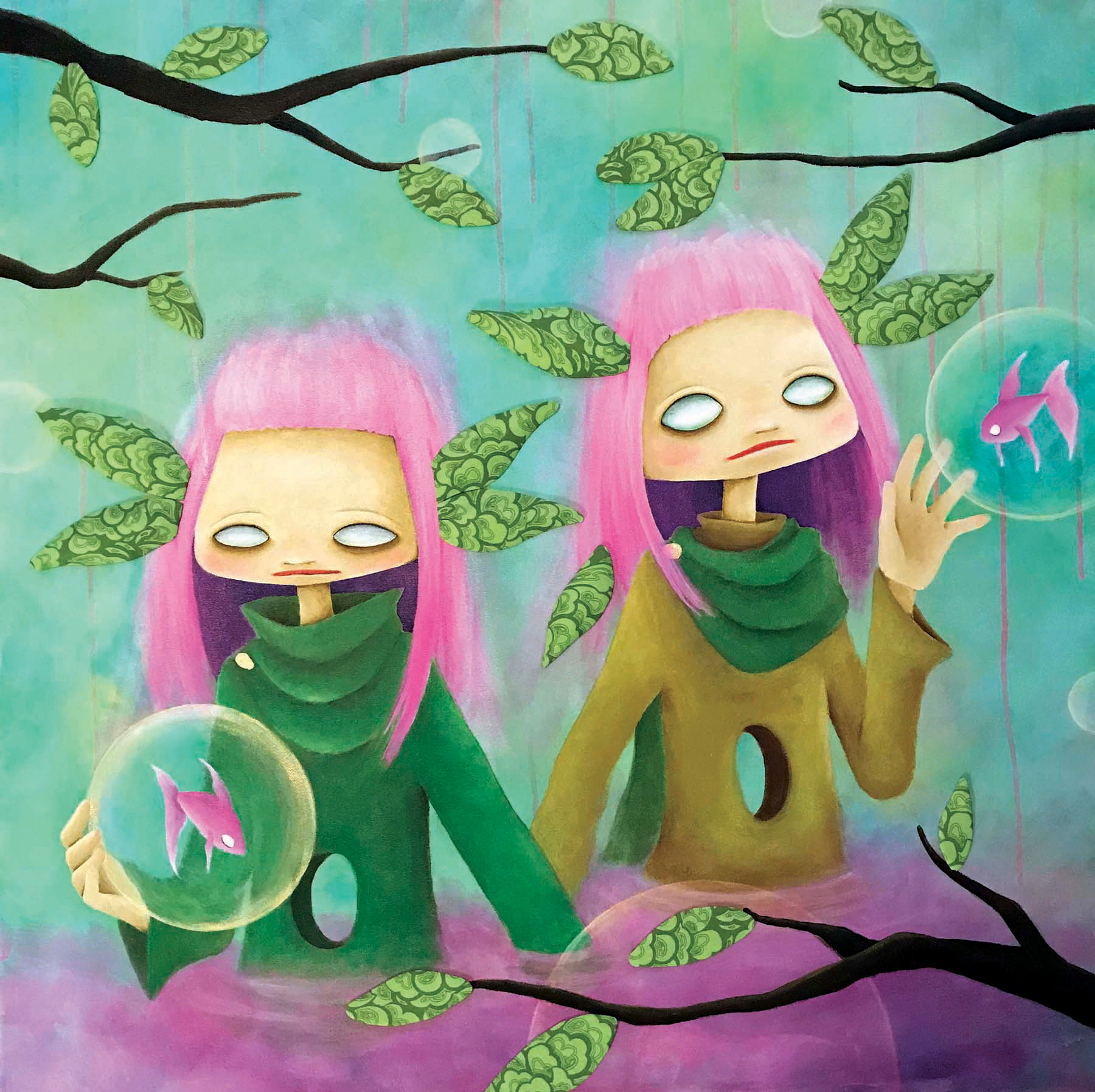 It hasn’t stopped Okahara from carving a niche of her own. Though active in the Sacramento scene, she’s not a part of any art collective or collaboration. Instead, she’s found a community online, often streaming her works-in-progress for friends and followers on Twitch, or posting temporary snippets via Instagram stories.

In the same way, her work tends to be playful and interactive. Though she’ll often listen to music or talk radio while she’s painting, humor is one of Okahara’s biggest influences.

“Growing up in Osaka, there was a very big comedy scene,” says Okahara.

Moving to the United States introduced her to traditional stand-up, and that direct relationship with the audience continues to be a huge motivating factor for her.

“That’s why I like having little galleries or receptions for my art,” says Okahara. “I’m really shy, but I like talking to people, listening to what they say about my piece. I enjoy listening to their thoughts or feelings on what I’m painting.”

For Okahara, that feedback might supply the only narrative she needs in her work.

“I do sometimes have my own story and paint it, but it usually comes after I have the idea,” she says. “I’m making it up as I paint. I want other people to do the same when they see my piece. If they have their own story, it’s awesome. That means it speaks to them.” 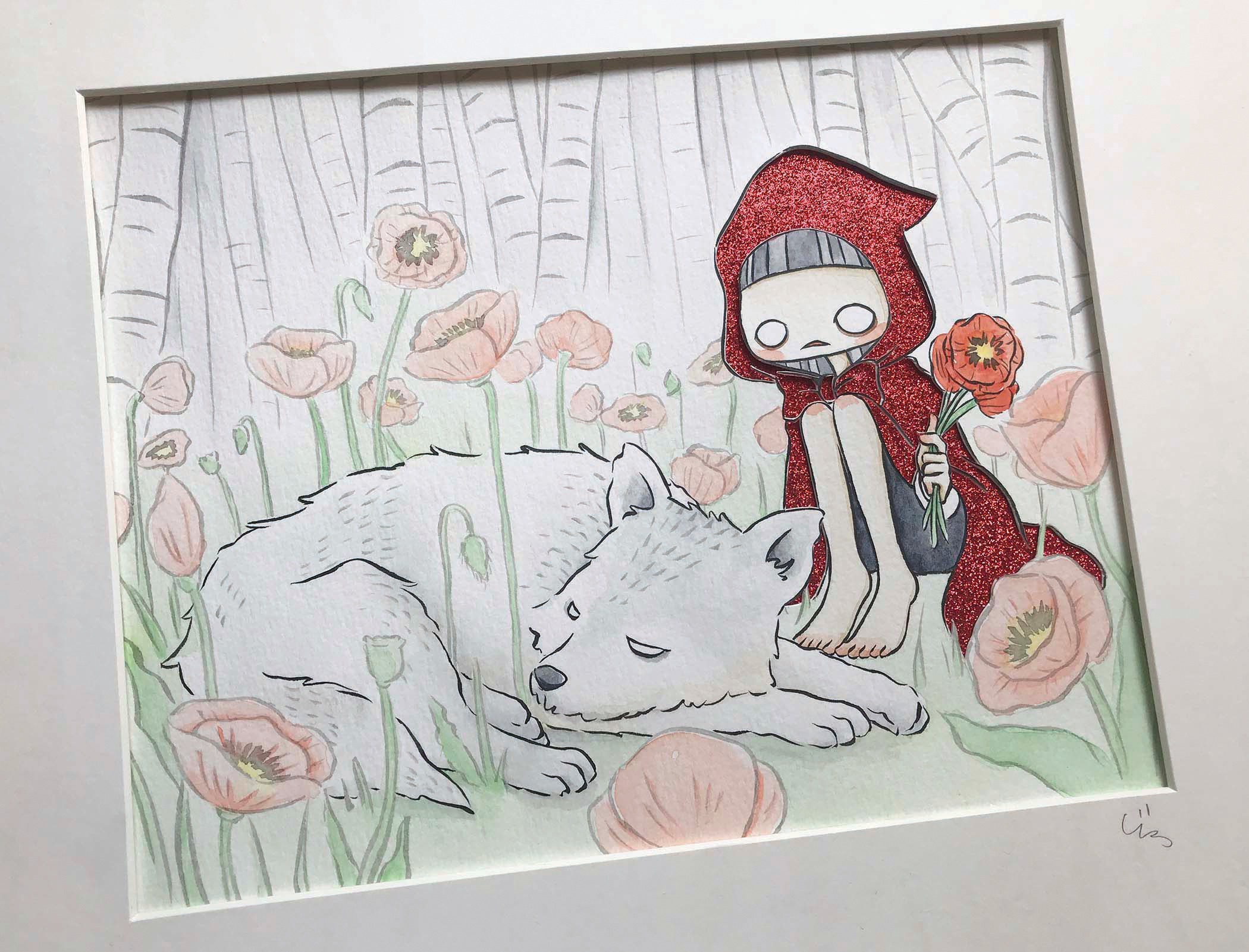 Okahara’s career, like her art, has not yet been completely defined.

“I am a full-time artist, but not quite at the point I can support myself,” she says.

For now, she has partitioned her front room studio into separate areas for streaming, for making art, and for printing, as her work has expanded to making buttons, pins and stickers. Her state-of-the-art printer, a recent addition, allows Okahara to oversee her creation operations from beginning to end.

“I don’t like manufacturing because I like to see the product before it gets mass produced,” she says. “It’s a learning process, but I like the control. I can see it and I know it’s coming out good.”

Okahara uses her newest toy, a tablet, to make custom avatars and emoji sets on commission, a return to her roots in design.

Keeping virtually her entire artistic arsenal contained in-house presents challenges of its own. 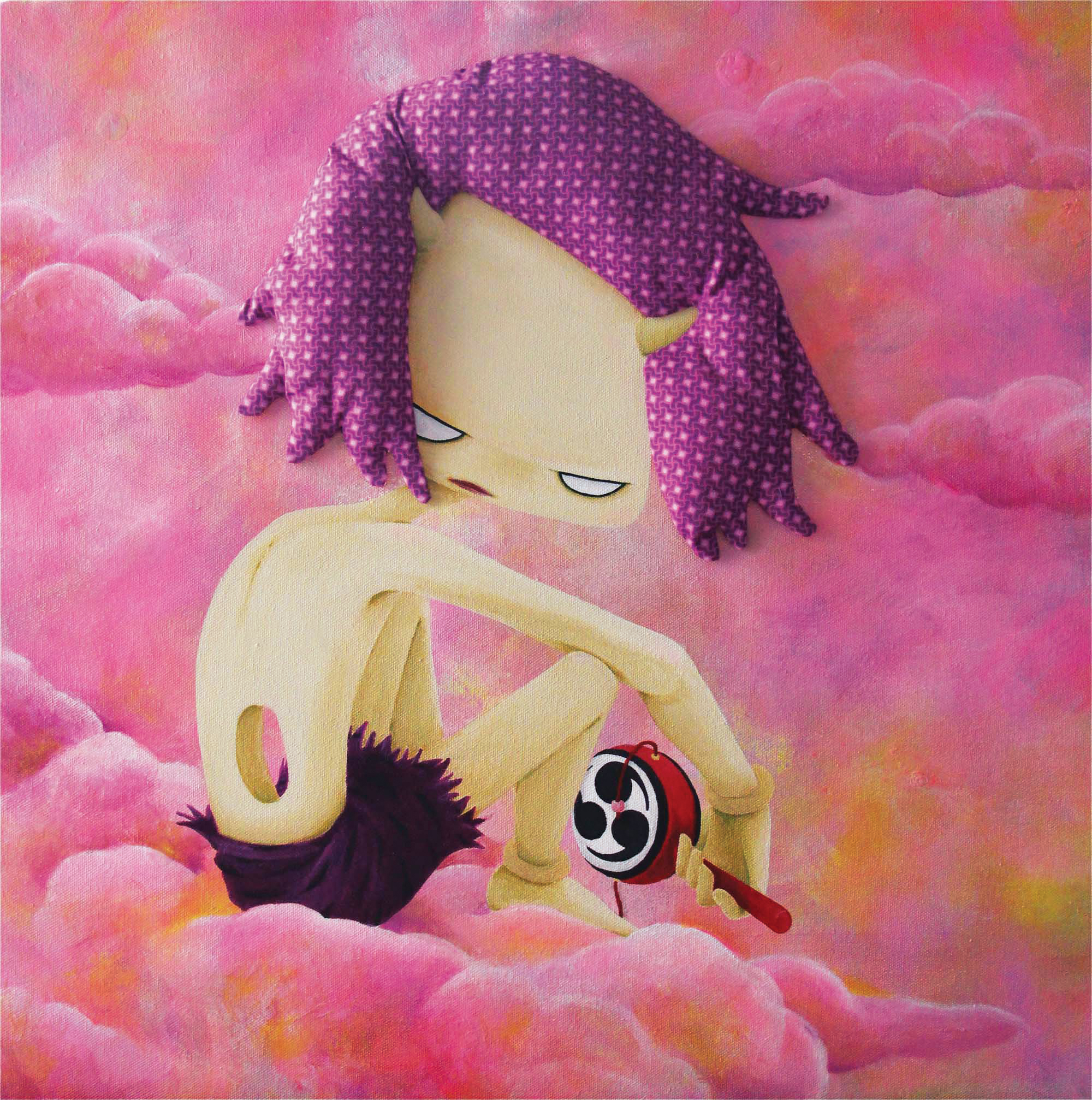 “Our living room is basically a factory,” her husband Johnny jokes. “We don’t have people over. We’ve moved our TV to the bedroom.”

But this suits them both just fine. In addition to graphic design, Johnny also builds with LEGO, and the setup allows them to bounce ideas off each other.

“We both know how we work and what we are capable of,” says Okahara. “So when I need his help for a project, he gets what I want from him without me explaining everything.”

“The challenge is, he can see through my unsureness if I have one in my art,” she admits. “I can’t fake him!”

Fortunately, there is little fake in Okahara’s art. Her subjects reflect the authenticity of everyday life—food, animals, insects and people make up much of her work, which tends to resonate with the most genuine among us.

“Kids really like my stuff,” she says. “It has bright colors, and you can touch it.”

“My favorite piece is the next piece I’m making,” says Okahara. “Always, always.” 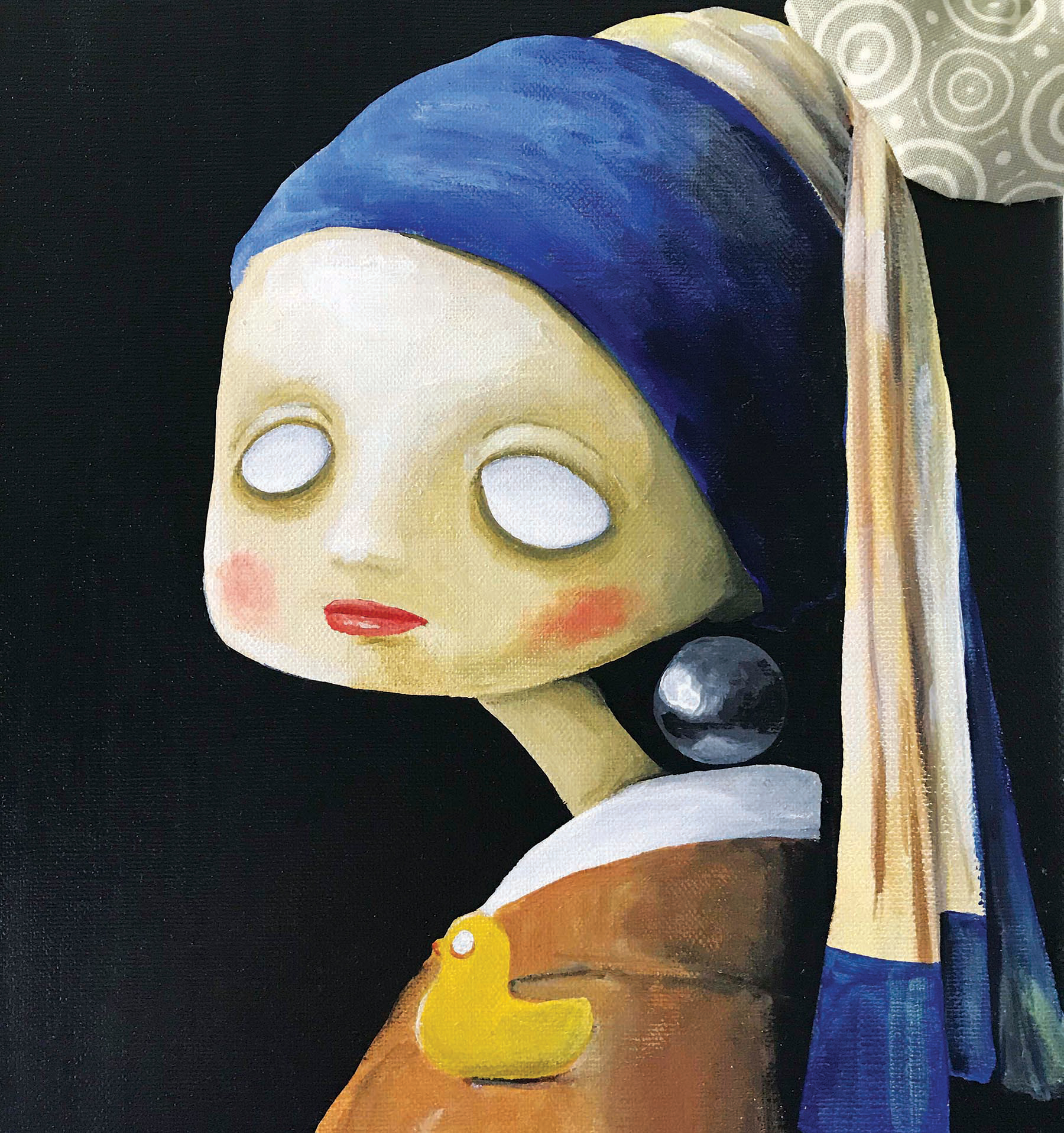 Julie Okahara is the artist of the month at Empire’s Comics Vault (1120 Fulton Ave., Suite K, Sacramento). An opening reception will be held on Feb. 16 at 5 p.m. For more information, go to Empirescomics.com, and you can learn more about the artist at her website, Julieokahara.com.