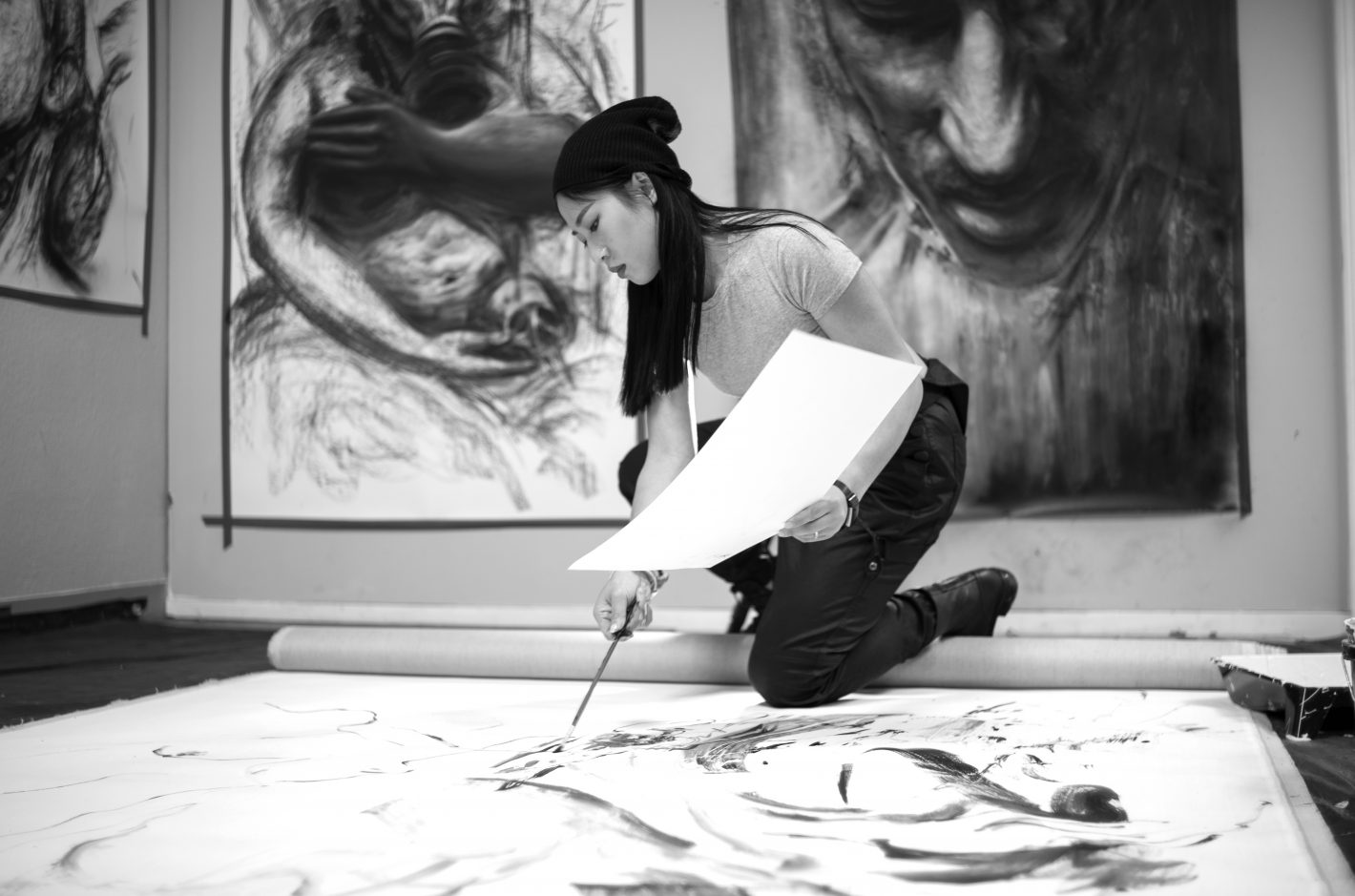 After missing 2017’s Wide Open Walls, this year’s event will feature the abstract and melancholic designs by new Sacramento local (by way of China) Lin Fei Fei. At the moment, she’s painting her mural outside Holy Diver, one of Midtown’s raddest music venues for performances local and beyond.

Lin produces work that consists of wistful interpretations of the human body and intense emotions within the psyche. The artist is more than stoked to participate in this yearly occasion spotlighting creatives from around the globe, and hopes her mural will complement the atmosphere of the venue she’s painting.

“So far, so good. I’m really trying to speed up the process so it’s finished in time for Wide Open Walls,” Lin remarked to Submerge on the progress of her piece. She continued, “The theme of the mural involves the concept of humans becoming reborn. While having that in mind, I’m also including elements that I think will match the the musical atmosphere of Holy Diver. I want it to be positive and fierce. Something special for the building. The images will involve a kind of screaming war between figures.”

In this new Sac local’s signature style, the design will include minimal color. Lin usually commits to about three shades in her work, this way each symbol is distinctly distinguishable to the viewer’s eye. While utilizing black and white paint, as the artist does frequently in her large-scale works, she plans on the addition of the color red to especially stand out.

The deep cardinal hue is not only reminiscent of Holy Diver’s iconic neon sign, the depth of the tint also represents intensity, passion, strength, power and attention, which are prevalent at any adrenaline-fueled concert filled with people who want to light the ground on fire (figuratively, of course). 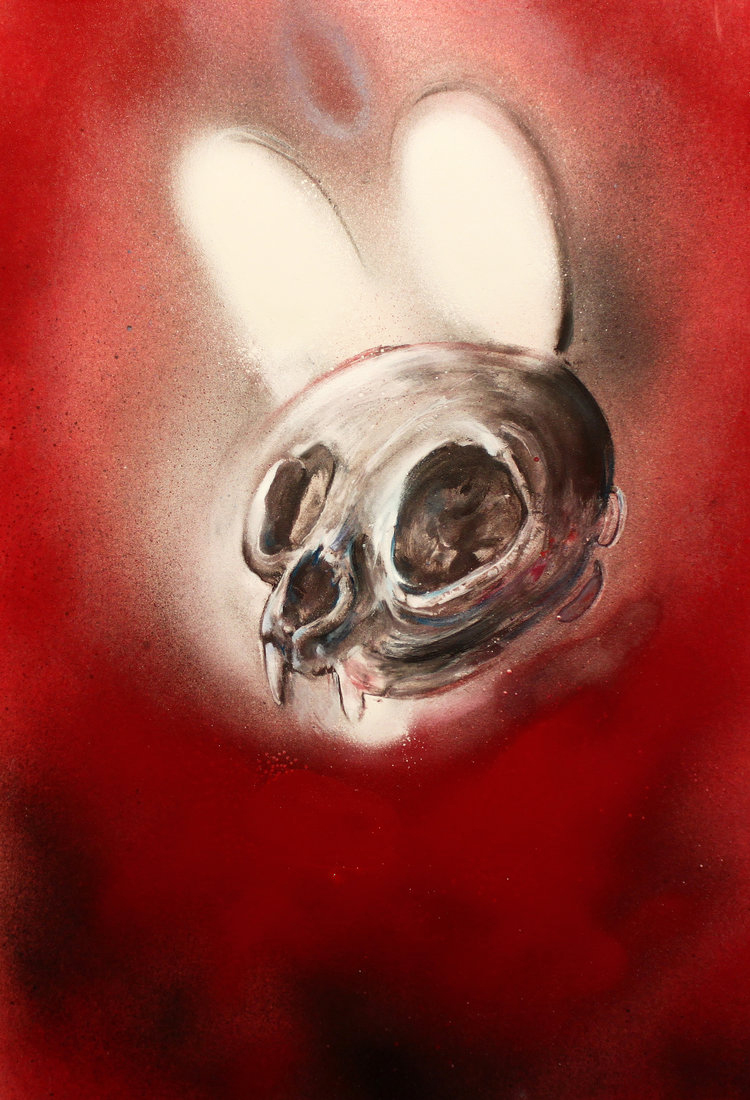 Much of Lin Fei Fei’s work features a darker perspective, with hauntingly exquisite reflections of the human form. She pays full attention to every curve, edge and wrinkle of her subjects and illustrates emotions people emit while understanding that the energy of these feelings are never straight, but instead a series of chaotic lines and cuts in every direction.

“When I studied art I was attracted to [human] figures,” Lin expressed. “I feel like the human body is very beautiful. I remember when I first painted human figures I was like, ‘Wow, I want to paint more of these.’ I wanted to know who the people I painted were and are. This shell we have, it’s beautiful regardless of anyone’s standards of beauty. I think no matter what the shape, no matter whether skinny or curvy, the human body is beautiful. I think [painting such figures] is a strong reflective message about ourselves and represents every individual.”

Though some of her projects contain sexualized imagery and dark comedy, some may find it surprising to learn Lin isn’t in fact an entirely gothic individual full of “doom and gloom” as her pieces portray. She is sweet, polite and stays as positive as she can. What attracts her to working in such a somber painting style can be explained by the cliche of not judging a book by its cover. 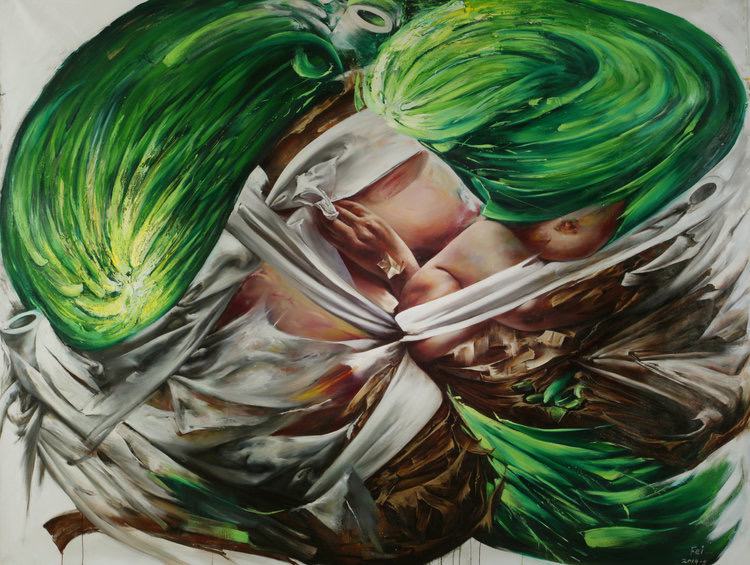 When asked about those who influenced her technique, she asserted, “A big influence of mine came from art in Europe during the Renaissance by creatives like Leonardo Da Vinci, Michelangelo and others. I try to blend the old European styles of illustrating the nude form with modern fashions shown by Francis Bacon. While I do this, I blend what I have learned from art of Western civilizations with the movements in works from art of Eastern civilizations such as China, where I’m from.”

Along with combining cultures in her work, Lin blends the objects in her pieces through swirls she paints. Certain parts of the body in these pools are connected to those not usually linked in reality. These curves and the colors she uses, as Lin explains, represent again the types of energy all humans emit. 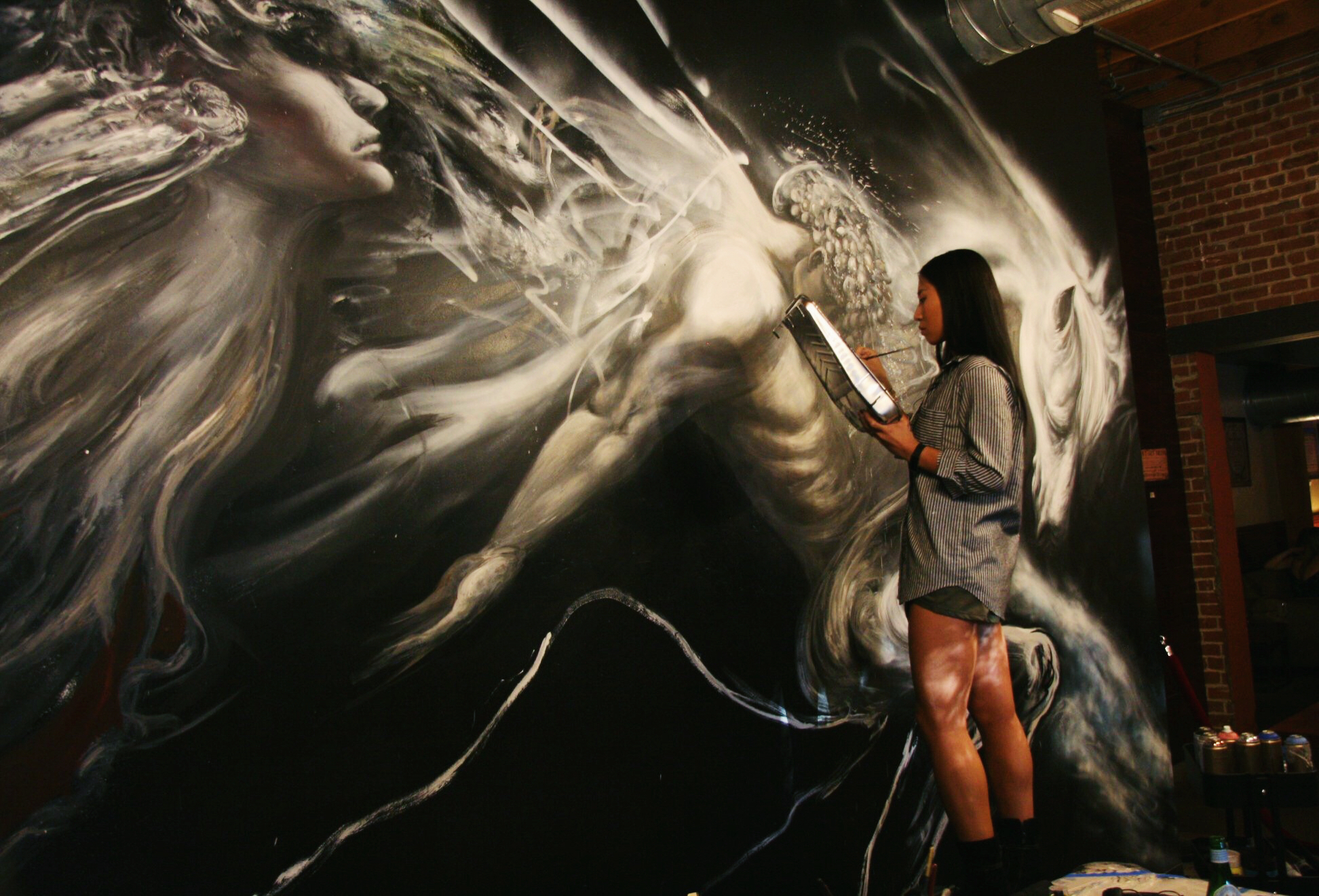 When explaining her reasons behind this she responded, “Naturally I just do this. Sometimes I don’t even think about it, but eventually along the way as I paint I want to draw something as a swirl or something that shows movement. I look up to the energy and power of human beings. The movements are represented in swirls combined with other abstract stuff. Human figures will always be my thing in art. I always like to combine the chaos and any kind of energy around us in the real world.”

Lin told Submerge that while in China and working on her craft, she was under strict standards of how she could conduct her art. She hated how limited she felt and wanted to be free from such constraints.

She has a series of popular green pieces that she says were so loved by audiences because of their cheerful colors and their invocation of nature. She understands how happiness can be moving but did not want to be limited to only art that was positive. 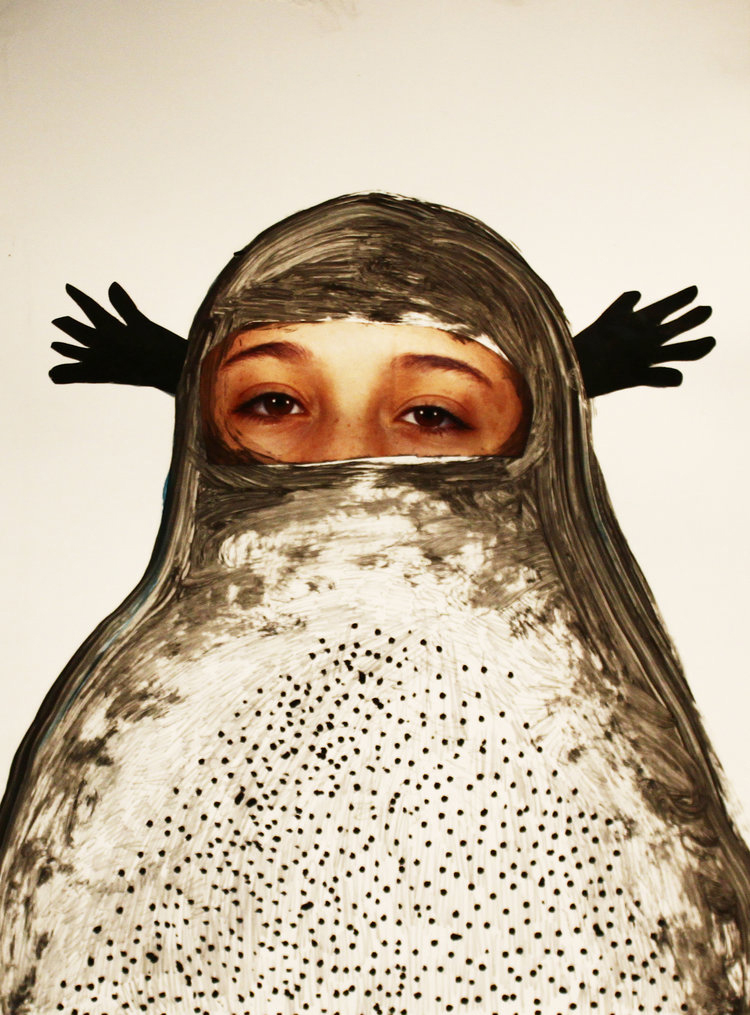 “I’ve studied humanities and psychology,” Lin explained. “I have a huge interest in human beings. For myself, I want to speak the truth—the other side of happiness that is intense. A lot of people avoid the sadness or the ugly side of something they don’t want to face that is the truth. But art not only shows the beautiful things, art reflects the world, or how we feel in depth beneath the surface. In China, there is a certain standard and there are many rules you have to listen to. I want to show a different side of our life. It might make people feel uncomfortable, but I truly believe art should be free to show whatever the human feeling is.”

When she first came to California from China, she found a great change in being able to express herself, but not everything came easy. She battled loneliness constantly, and being in a country where outsiders are vilified by its leader had caused her anxiety at the beginning. With these intense emotions, however, she was able to dive into her work with a better understanding of herself and what she is trying to accomplish being away from home.

“Of course I feel lonely all the time and it is very difficult,” Lin said. “When I was in China, I had friends and family to help me in a difficult situation, I never really felt scared because I had them supporting me. I’ve lived in Europe, too, but during study I had my teachers looking after me. In America, it’s a totally new life because you have to completely rely on yourself and you have no friends at all—like literally nobody. But I have to be strong and be tough, and I am.”

To relieve loneliness Lin immersed herself in the Sacramento art community through fellow artist Gabriel Sanford. He and Lin met at a show, and with his help she has connected with many different creatives in the community. She now feels very welcome and hopes to have the ability to do more in the area’s art scene to bridge cultures together. 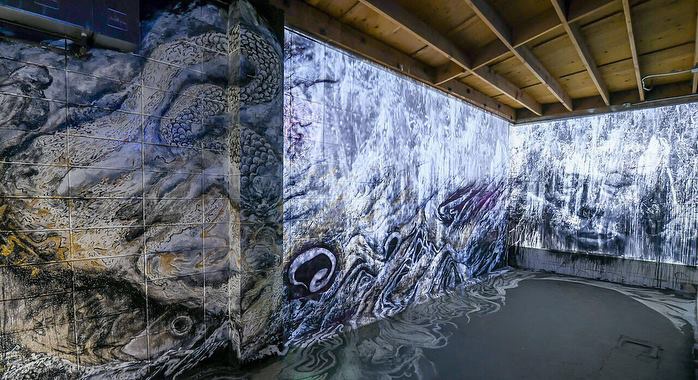 When it comes to choosing between Los Angeles, Sacramento and San Francisco as a place to live, Lin insisted she would always choose Sac. She finds our city not only affordable, but a great place where she and her husband can start a life together. Being a part of Wide Open Walls means a great deal to her, because it is one way of saying thank you to the community she calls her new home.

“This event is very special for me because I am still new and an outsider in Sacramento,” Lin said. “This community has been really supportive of me and has given me so much love and acceptance. I want to do something to return the hospitality, as a gift for the city and for the people who are here.”

Lin Fei Fei may believe she’s an outsider, but Sacramento considers her a talented local and a part of our continuously growing art scene.