Putting the Pieces Together • Melissa Arendt and the Art of Inspiration 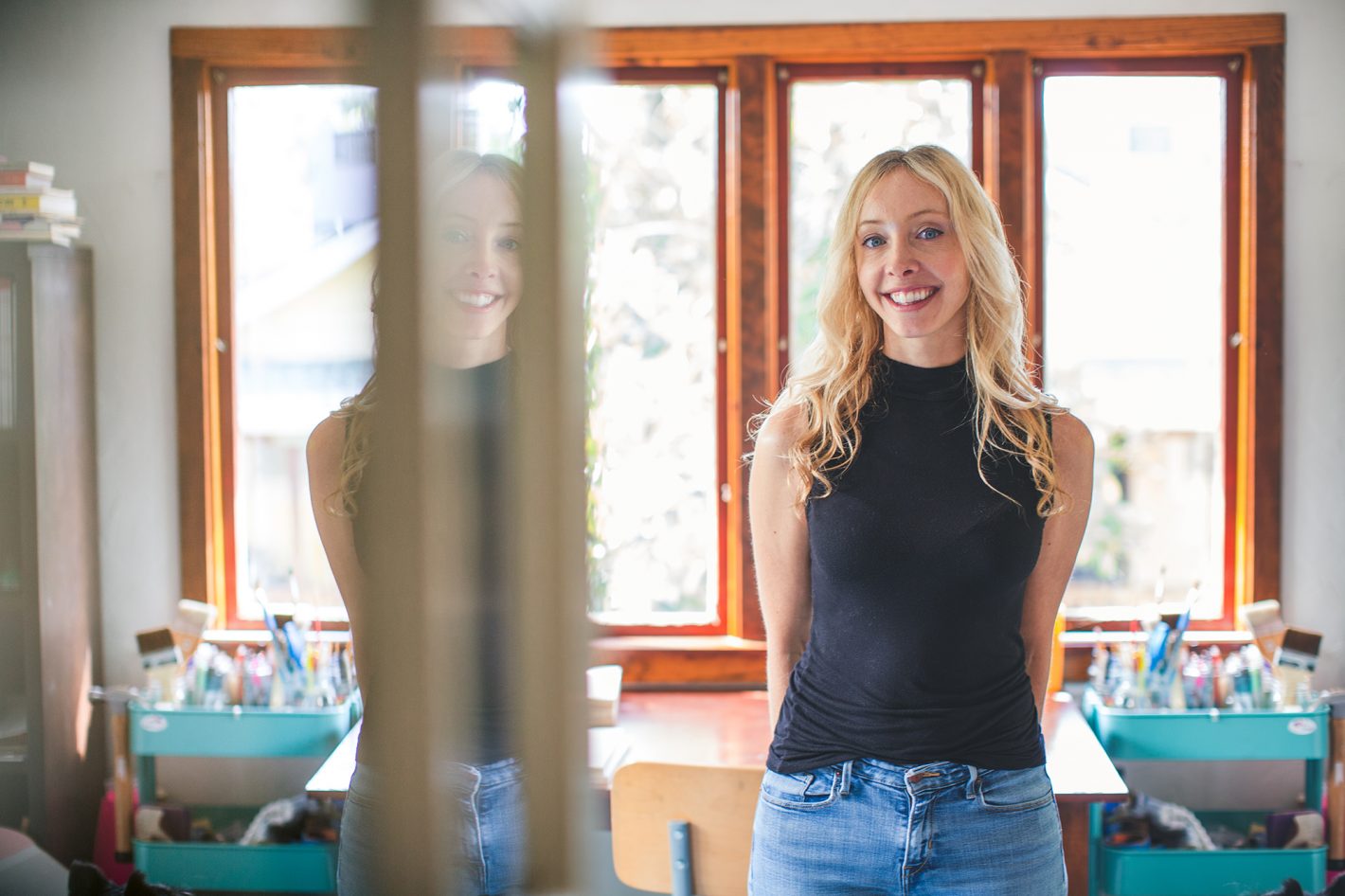 Melissa Arendt refers to her work as “a fragmented record of life on earth.” At first glance, her pieces give the appearance of collage—dense, busy, eclectic—though in fact they’re completely hand-painted and drawn. Time and space are limited, and she’s trying to fit it all in.

Art has been Arendt’s passion since she can remember, and her very first efforts reflect the style she’s honed today.

“I would take a sheet of paper and just try to fill it up with as many little drawings as I could, of little fruits or people or animals,” explains Arendt. “I would make little animals out of rocks and draw little faces on them. Just weird art.”

She had a built-in audience right away. Arendt’s two sisters loved art, too, and their parents would take all their paintings and drawings and put them in a dresser drawer they called “The Museum.” The Museum quickly became a collection of all the things they were most proud of. 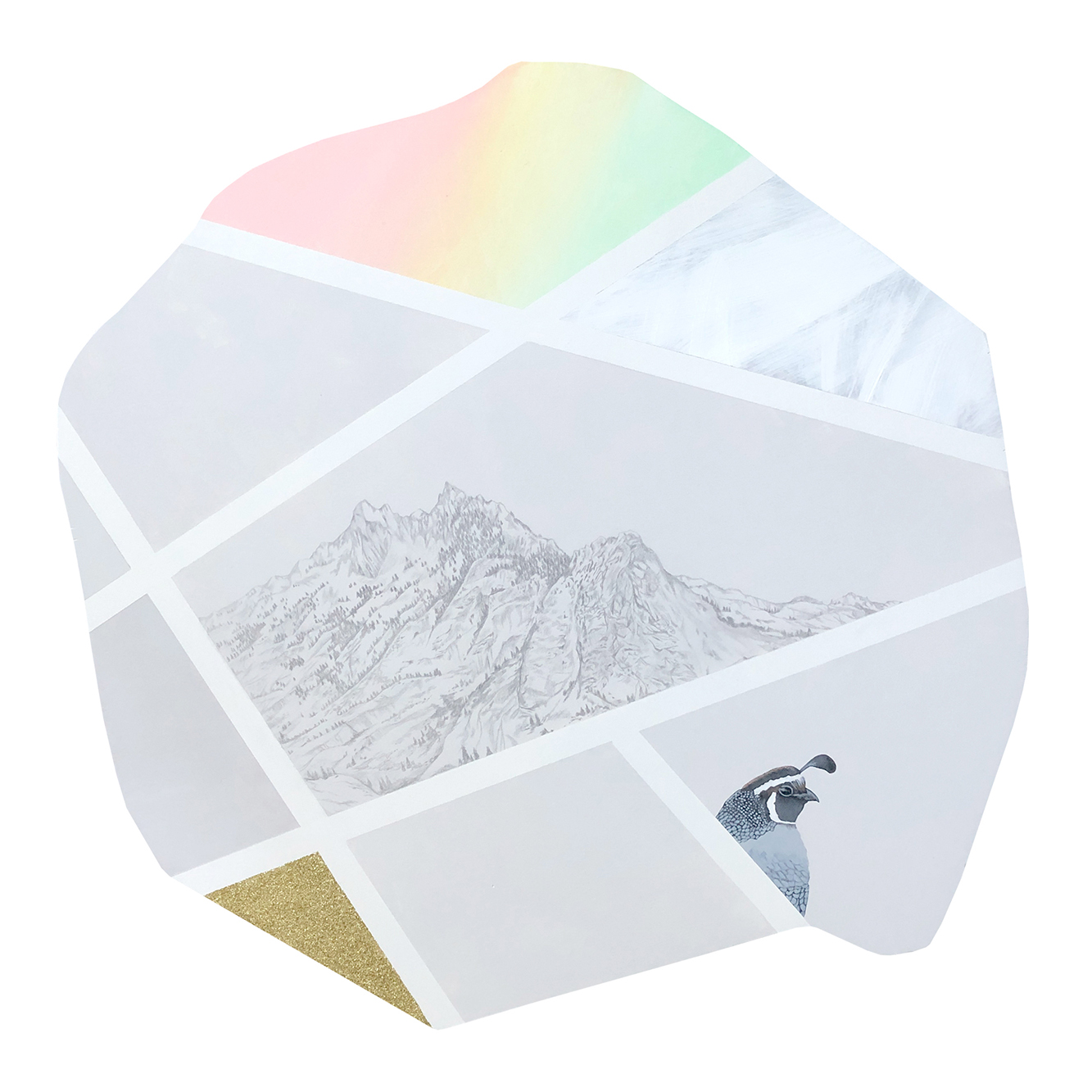 “We looked at it recently,” says Arendt, “and it was just all the worst stuff you’ve ever seen. But [our parents] were really positive, and thought our stuff was so good!”

Arendt continued with art classes and art club throughout high school, and she points to her high school art teacher, Mrs. Amerine, as her hero. Beyond being supportive and showing a genuine desire for her students to succeed, Amerine took Arendt’s sophomore class on a trip to Yosemite, which would expand the lens through which Arendt saw her art.

“Just getting out in the elements and being able to paint from looking at something beautiful instead of being in the classroom or my little space,” explains Arendt of the inspiration from the trip. “Painting nature from real life was something I’d never really done before.”

High school was the extent of Arendt’s formal training in art. She took core classes at Sac City and Sierra College before studying graphic design with her twin sister Melinda at Academy of Art in San Francisco.

“I was one of the weird art kids, and that’s all I ever wanted to do,” says Arendt, “but when the time came to choose a career path, I opted for the sure bet, which was graphic design.”

Arendt was already working full time, which precluded her from any public loans. When she exhausted her private loans, she was forced to drop out, while her twin sister Melinda was able to go all the way through and graduate, offering Melissa a vision of what could have been.

Arendt was able to to pick up enough graphic design expertise on her own to build a career in the field and buy a house in Auburn, all while maintaining her artistic endeavors. Now she works Monday through Thursday and paints Friday through Sunday, but her goal is to transition to art full time. 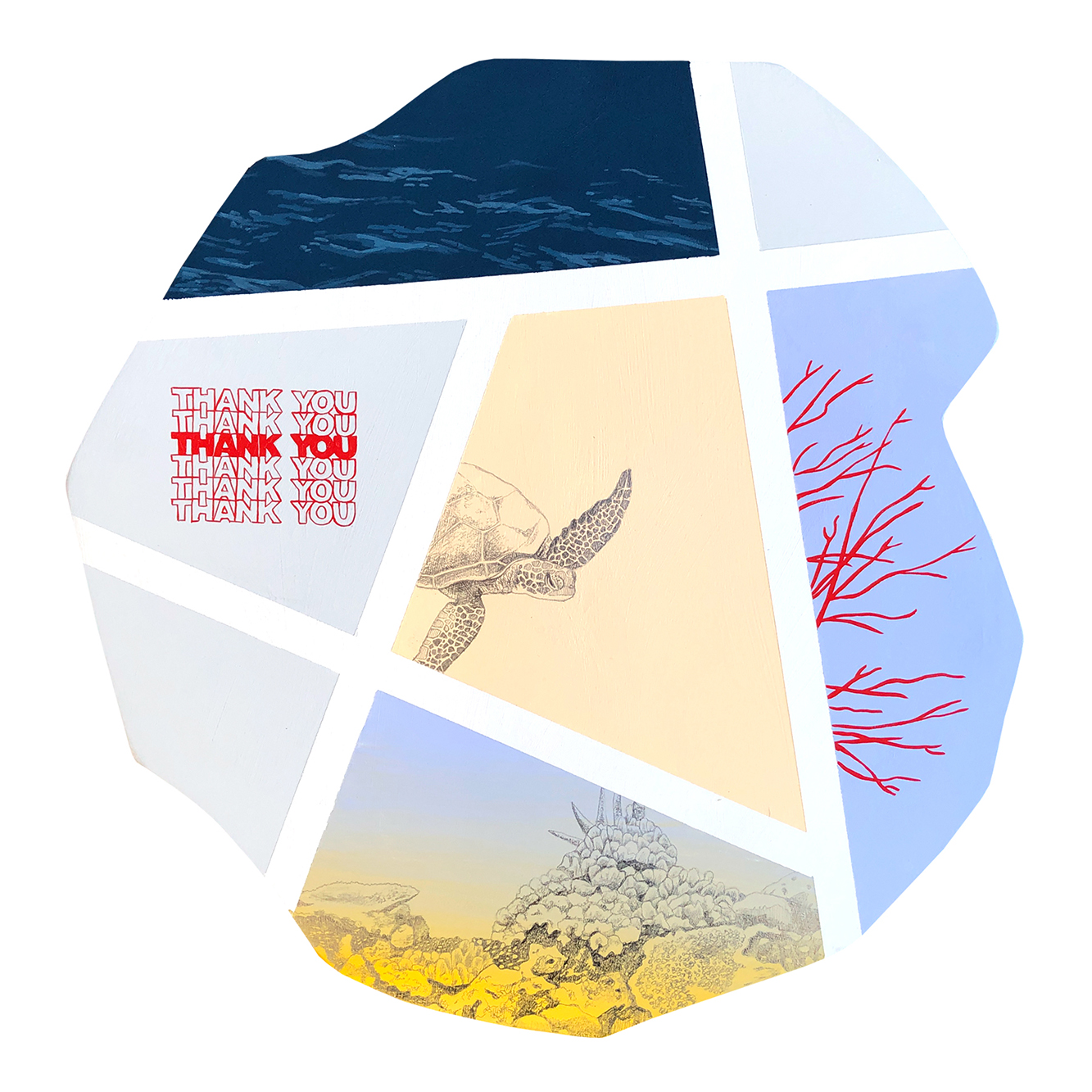 Arendt still draws from her design background when conceptualizing her pieces. She starts every project by mocking it up in Photoshop before shaping it into reality.

“Some artists might be like, ‘Why don’t you just feel it while you’re creating?!’” jokes Arendt. “I wish I could be one of those expressive artists that just throws paint around, but I’m just very tedious.”

Once her work comes to life, it’s anything but tedious. Arendt starts by painting on birch wood with a layer of gouache paint—because it’s chalky and more opaque than watercolor, it offers more vibrant colors. This enables her to then illustrate over it with mechanical pencil.

“I’ve always liked to take a lot of visual imagery and cluster it together,” she says. “I don’t know why—sometimes to tell a story, sometimes for the visual absurdity of it.”

By her own admission, Arendt has never learned particular skills like oil painting, or how to blend colors, but it’s her self-taught background that’s forced her to improvise in areas she hasn’t studied. Does that lend to the originality of her pieces? 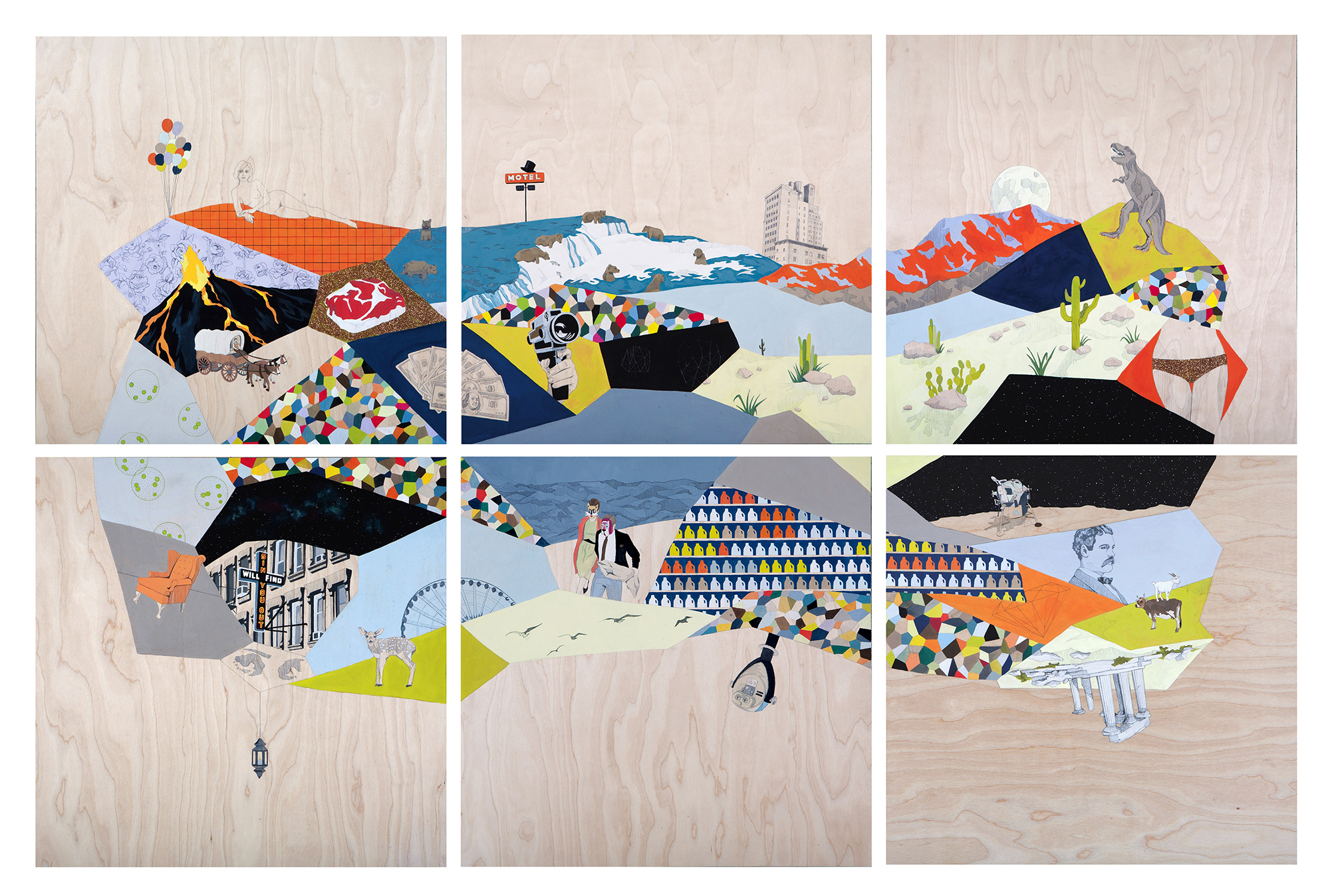 “Maybe,” answers Arendt. “But it also lends to imposter syndrome, that I should learn all these techniques that other artists know. But … I like my style!”

Arendt credits the community in Sacramento for supporting her with commissions and displaying her work at venues like WAL Public Market, Urban Hive and the former Bows and Arrows. She’s also done collaborative projects with Melinda for Capital Dance Project’s “Behind the Barre,” an annual show at Crest Theatre. But transitioning to art full time would allow her to travel, do more murals and gallery shows and expand her horizons in the field.

“Now that I’ve done these ballet projects, I’d like to get into stage design, public art projects, anything collaborative, I just want to do it all,” sighs Arendt. “Anything other than sitting in my cubicle.”

Her goal is to do a mural in every city she visits. For now, she’s making do with bringing the world to her own pallete. Arendt’s upcoming show at Beatnik is part of a winter display with two other artists, and she’ll debut a series called Fragmented Landscapes, where with each piece she takes elements from each scene and puts them together in clusters. A desert arrangement portrays a rattlesnake and a cracked road and desert mountains; a Sacramento scene historical buildings, palm trees, a mural at Dimple. 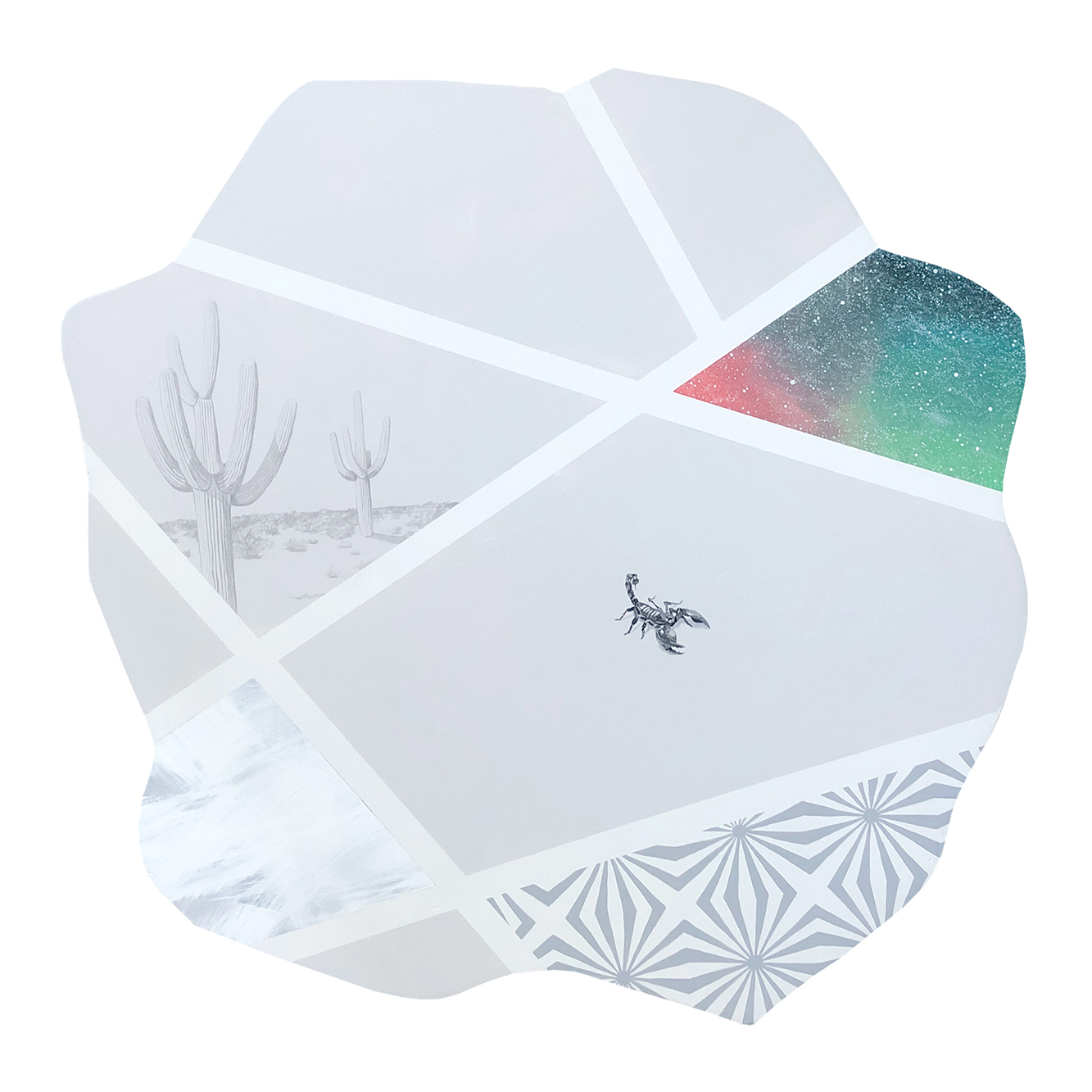 “I like to present all of these assorted things from the earth that make it such an absurd and beautiful place,” she says. “The overall story is just how intriguing earth is, all its inhabitants and environments.”

To that end, all of Arendt’s proceeds from the Beatnik show will benefit Earth Justice, a nonprofit dedicated to litigating environmental issues.

While the show could be an important step toward a full time art career, Arendt remains grounded, yet optimistic.

“I’ll always have to supplement somehow, and I’m lucky I have design, so I’ll always be OK.” she says. “But art has always been my number one. The love of my life.” 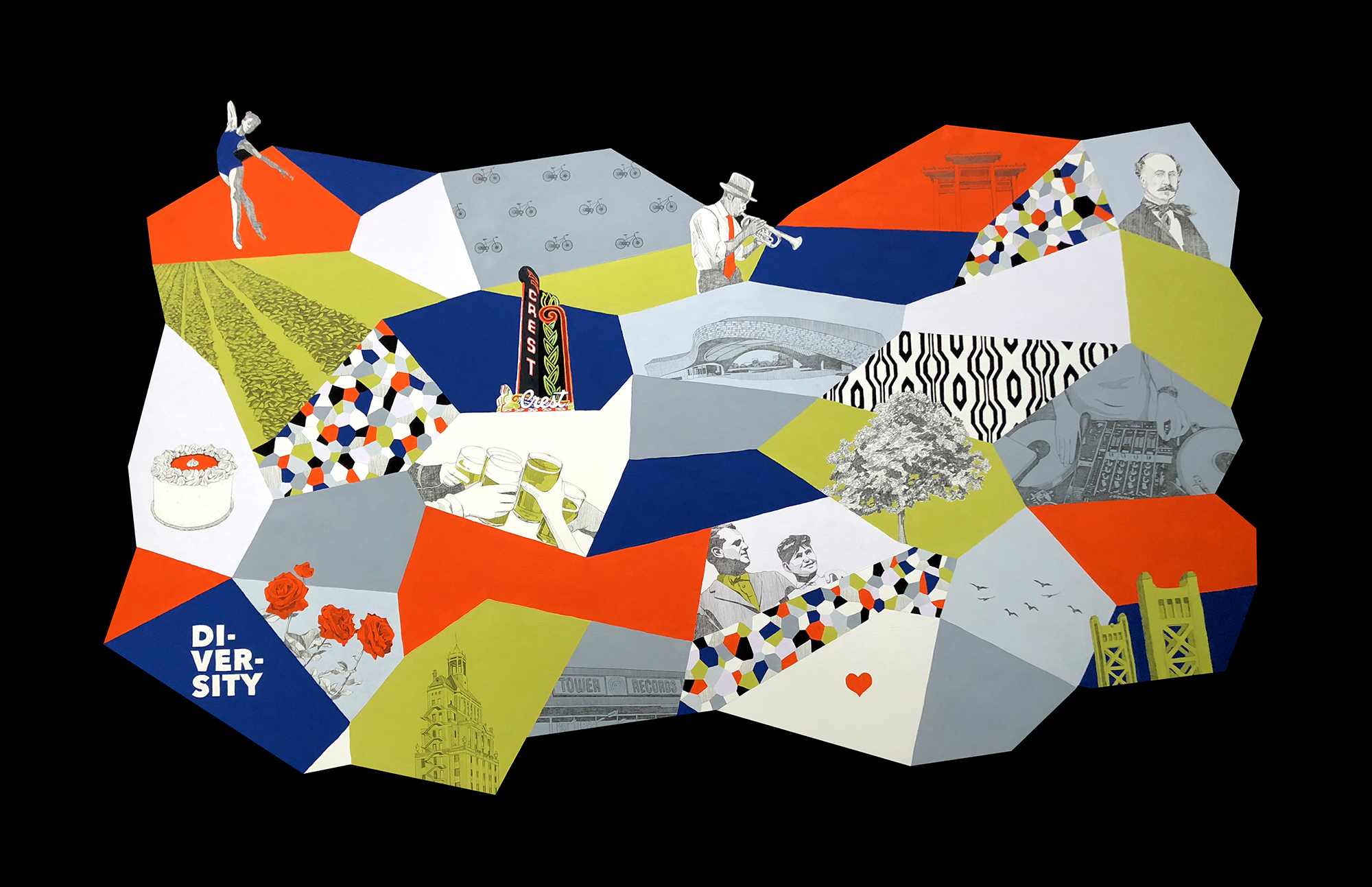 Melissa Arendt’s artwork will be display at Beatnik Studios (723 S St.) in December as part of a group show that also features work by Sarah Golden and Yelena Martynovskaya. Opening reception is Friday, Dec. 6. For more information, please visit Beatnikstudios.com, or Melissaarendt.com.