Seriously Playful • Richard Jackson Has Spent a Lifetime Being Mischievous 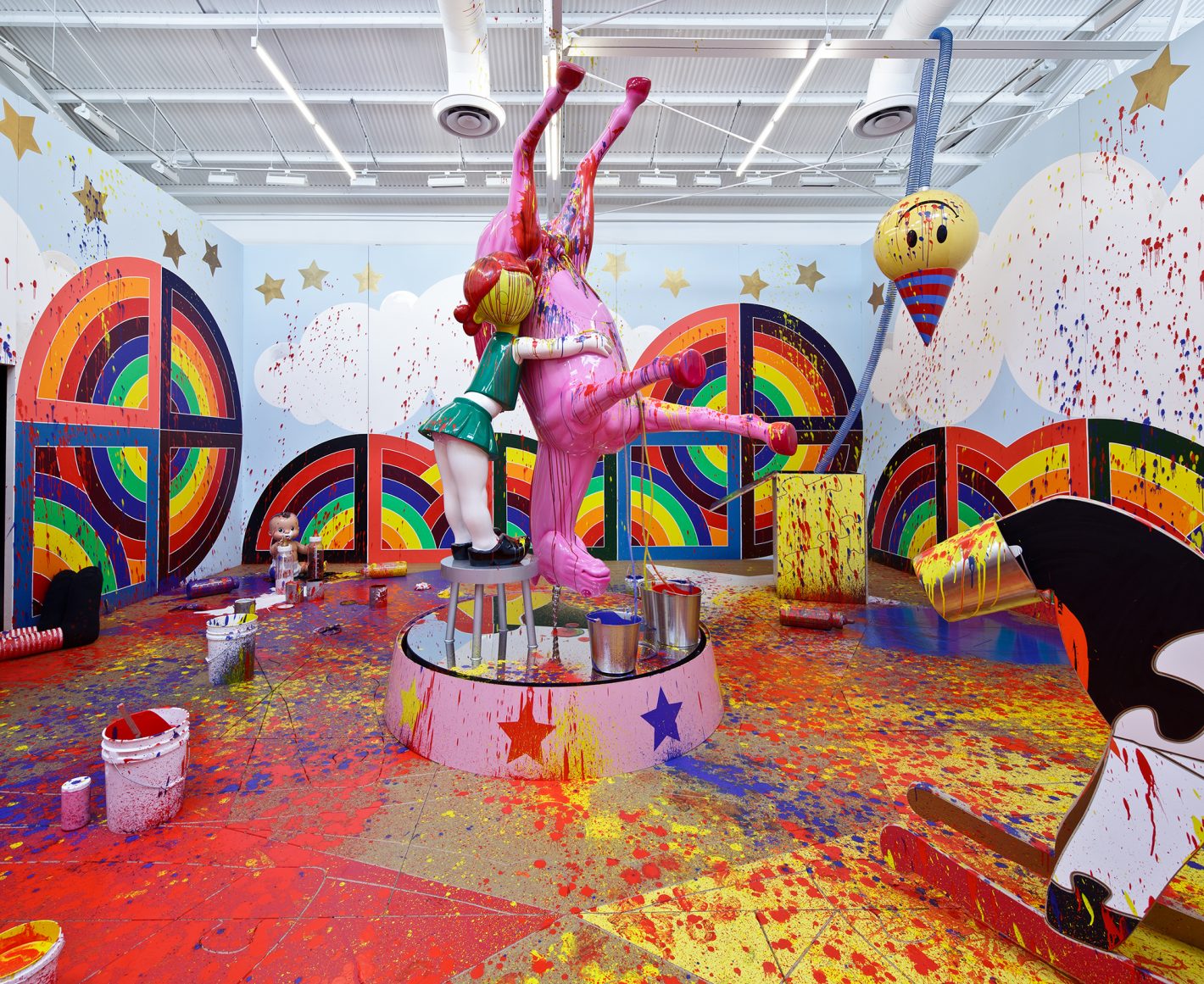 For such a seriously dedicated artist (or, um, sculptor—we’ll get to that later), Richard Jackson’s art is uncommonly comical. Walking into his exhibition at the Crocker was like walking into a vibrant dick joke. And as a Richard myself, let me tell you that Richards know their way around dick jokes.

I met Jackson as he was putting the final touches on the show that’ll be up for most of the summer. There are brightly colored bears pissing into a urinal—some of them have swapped their bear heads for urinals and are pissing brightly colored acrylic paint into bear heads. There’s a Donald Duck-like character with massive steel breasts for eyes, and vivid paint that sprays out of—you guessed it—a large steel penis attached to a pump. But Jackson’s work, in all of its lightheartedness, is neither juvenile nor silly. There’s a massive steel sculpture of his head, cast in bronze, turned upside down, cracked and corroding with bright paint having spilled out the cracks in the skull. There’s a rendition of Georges Seurat’s A Sunday Afternoon on the Island of La Grande Jatte done by dipping thousands of steel beebees in paint and shooting them at a canvas. Jackson famously shies away from over-interpreting his own work, but his art seems above being crass on its own in a way that reflects our crudeness back at us, playfully of course, but also earnestly.

“People are afraid,” Jackson said. “Because the deal is you have to change your thinking about art. You have to change what you already pre-conceived about painting and what you think painting should be and what you want it to be, is it collateral or what is it? Nobody welcomes painting that looks like that. It’s too bad for them, but I think that to change the way people think in a capitalist society, you’re bucking a lot.”

Jackson graciously invited me to the Crocker for a look at the show before it opened. 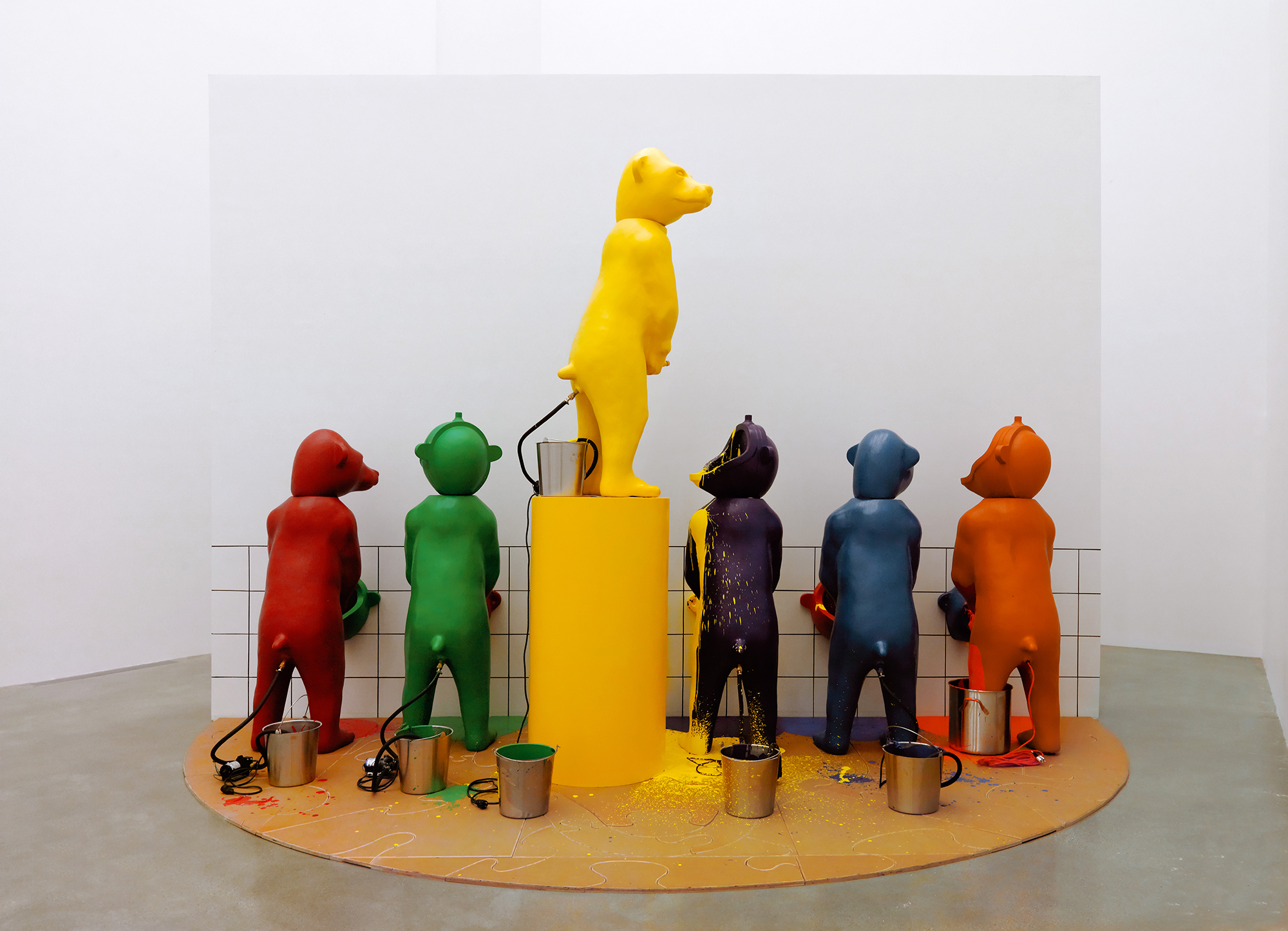 I know that you lived in Sacramento for years, do you consider yourself a Sacramentan?
No. I’m from much further north. You know, my family was around Colusa county. My family’s been there for 135 or 140 years. Anyway, I lived in Sacramento, but no.

And you went to Sac State, too, right?
Yeah, but I didn’t finish.

So how’d you start as an artist?
I was an engineering student and back then you had to take drawing because everything was done in an analog style. There were no computers, so we had to learn how to draw everything out.

But your art is so playful. How’d you start to see yourself as an artist instead of an engineer?
I got kind of interested because it was the 1950s and there’s a whole group of people making art, but there was no money in it so I thought, “Hey this must be interesting.” Then I got interested in abstract painting. I got interested in Jackson Pollock. I went to New York in 1960 and looked at real art and I got interested in jazz and later on, of course, rock ‘n’ roll. I mean, the best thing about Sacramento was that it was close to San Francisco. That’s where we always went, and I think growing up in California when there were only 15 million people instead of 50 [million] or whatever it is now, it was a pretty great place to be.

Do you think that growing up during that time was special in that it allowed you to sustain yourself with art in a way that maybe doing the same thing today would be more of a challenge?
I don’t know. Times are so different. Forty percent of all people want to be artists now, you know? It’s a completely different thing because we have generations of people who don’t do anything they don’t want to do. When I was 15, I was thinking that I’d better get my shit together because I could end up in a foxhole somewhere, and now you don’t have that pressure to grow up. I think also you should contribute something to, not the country, but the society. That’s a bigger thing.

Are you working on anything now?
Oh, I’ve got a shooting gallery—I’m going to make it look like my gallery, you know like the entrance and everything, and people will shoot at it with the paintball again. There will be a big canvas in the back of it and they’ll shoot it and make a painting and then I’ll try to make that sort of make commercial sense. And then I have a motor home that I’ve turned into a tank and there’s a digital helicopter that comes up out of the floor and flies around the room. And there are all these blow-up sex dolls that are filled with paint all over the place like they were dead people. I’m having a hard time trying to figure out where to show things and who would show things because now we’re in a very conservative period and all this crappy painting, decorative painting has come back and it’s something that everybody understands is non-objective painting because it hangs in motel rooms, so I don’t know whether I want to be involved in that atmosphere. So I’m trying to figure it all out, but I’ll probably show in Europe where they’re not afraid of art as much.

What do you think that it says about America that we’re experiencing this kind of lull in the arts?
My German friends say, “You live in an uncivilized country,” and I never really thought about it—until I thought about it.

Do you have advice for somebody who is living here and just starting out?
It’s different now because there was no money in it. That’s what attracted me to it, like, ‘Hey this must be a bunch of interesting people.’ But now there’s a lot of money in it, so I don’t know. I taught at UCLA quite a while ago and I had really good students. So I kind of saw how some young people figure it out, and then I find others that sort of have a romantic idea about it. It’s a job. I think for younger people, they can’t make the change over from art school which is all fun and everybody is paying attention to you because that’s the nature of it. And then all of a sudden, you’re on your own and you didn’t learn that you get to make your own rules. And so it’s really the same problem that I had only there’s this huge amount of money in it now. It’s a different environment. 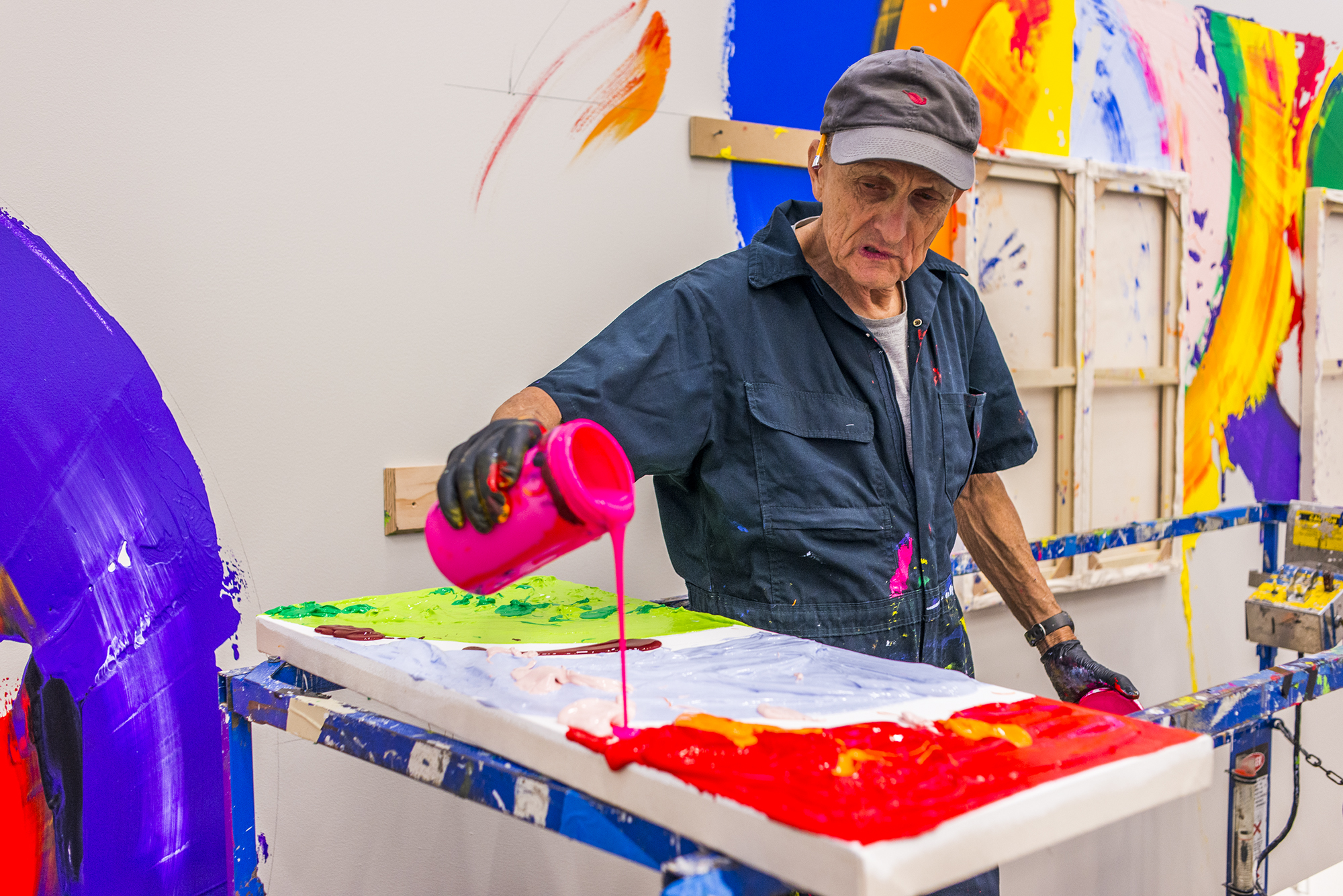 It makes it hard, doesn’t it?
It makes it hard because success can be evaluated differently. It can be just by money or maybe you make something really great and nobody cares and then you have to figure it out.

And then that way, it makes it even more difficult because we’re using money-making potential as a means of measuring worth and when your art is made with that intention, it’s not really genuine.
Yeah, it’s like, “I’m just doing this for the money then I’m going to do something I really want to do and drive around in a Porsche.” It’s so crazy. I mean, it’s a different time, but I don’t know. I think the real trap for the younger people now is that the art establishment is like other businesses. I think that a lot of people are attracted to it who don’t want to change it but want to be part of it. So in my mind—I might be wrong, but in my mind—I would rather someone say, “Hey your art is a bunch of shit, we’re going to do it better,”
you know? 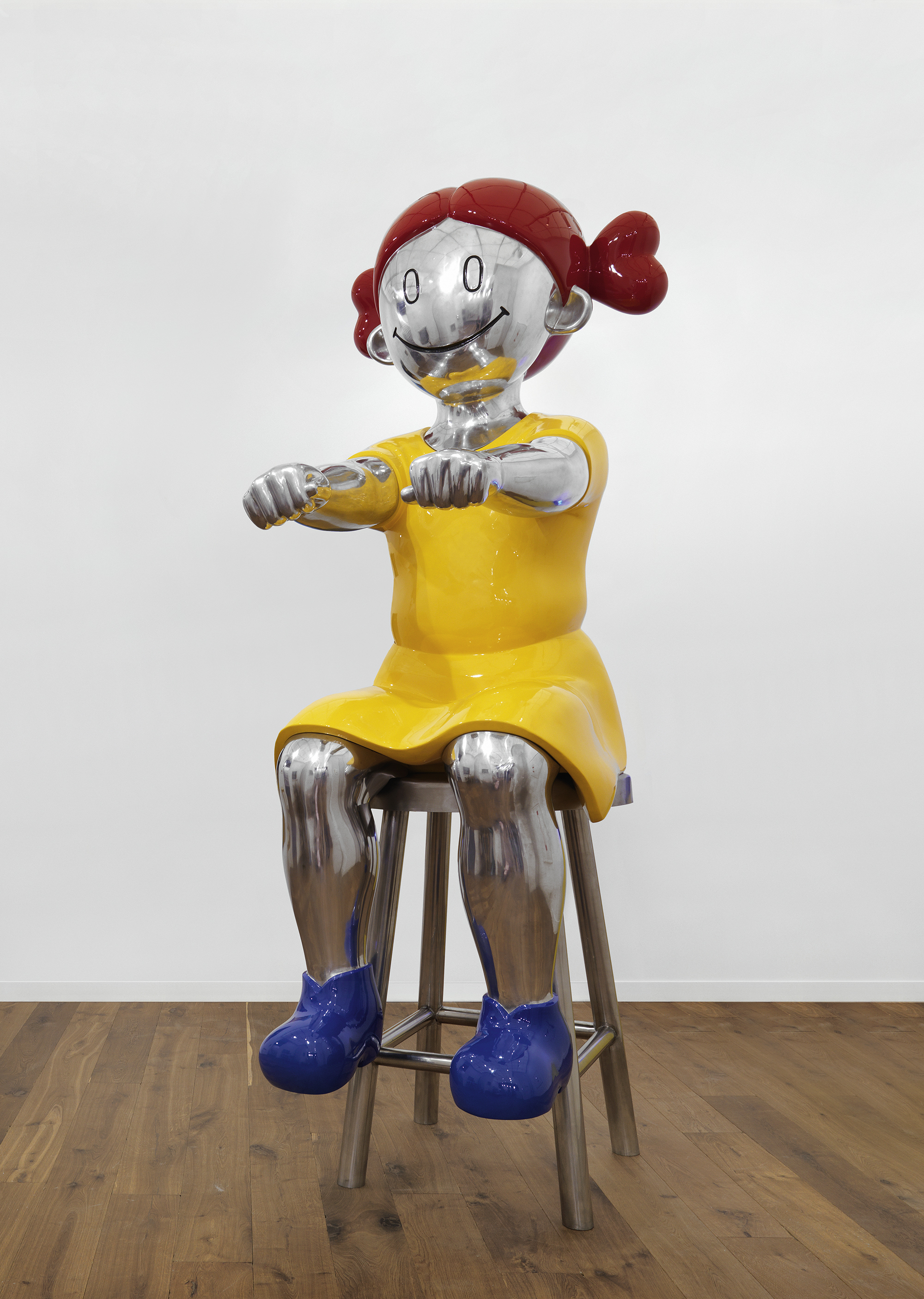 I had read somebody calling you a Neo-Dadaist. How do you feel about that?
I don’t know. I don’t think in those terms. And I think it’s important that there’s a division of responsibilities. As your job is to write about art, my job is to make it. Someone else’s job is to interpret and explain it and tell the public. So I don’t think in those terms and I’m not into art history because things are made in a different spirit now than they were. Nothing is made very well.

Are you talking about just things like iPhones and Toyotas and whatever, or are you talking about art being not made very well?
Everything. And I think art is just an example of that. There’s so much art being made, and you can’t treat it as if it’s important, because it’s not. I think things are still badly made and you can’t preserve them, you can’t archive them and you can’t store them. It’s like you were saying, like an iPhone, you’re not attached to a phone. It breaks, you just get another one.

Can you talk about your process a little bit? It occurred to me that experiencing your art is a lot like walking into a crime scene.
You’re thinking, “How’d it get done?”

Exactly.
My favorite art is like that because you can see the thought process kind of like this. And basically, I guess it’s not non-objective. You know, there is an objective and if something is non-objective, why do it? Painting hasn’t changed since 1940. The only thing that makes painting look different is either that the materials have changed or the technique has changed. Otherwise, it’s just decorative and that’s not enough.

So in that way, do you consider yourself a formalist? I know that you said that you don’t like those labels, but …
But probably. Sure, why not? 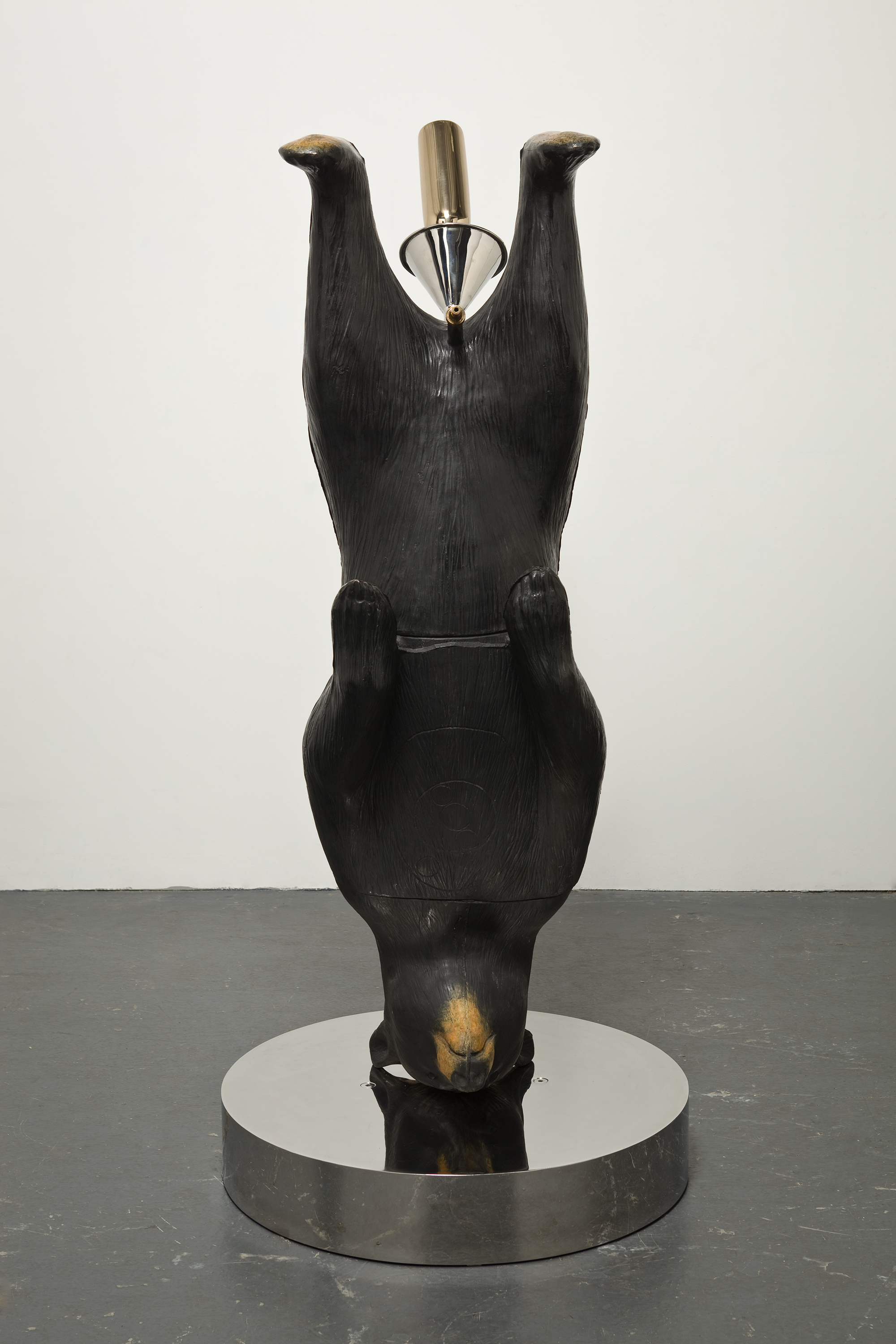 Can you talk about this show at the Crocker? You’re including the stacked paintings called Big ideas, right?
Yeah, this is a thousand pictures. Exactly a thousand are painted and stacked when they’re wet, and you know basically, the commentary is because I consider myself a painter more than a sculptor because there’s always paint involved in everything … When I taught at UCLA, I had to teach sculpture in a class called new forms or new genres or something pretentious. But I’m really a painter, so this is like a commentary on painting. Abstract painters have one idea and then they make a thousand paintings and that’s called a career.

There’s so much motion and action in your work even though it’s still. Do you see these as kind of proof of performance?
That’s exactly what they are. That’s kind of like an action. This is a residue or the evidence of it. And what I try to do when I’m working, I’m not as strict as I used to be about people being around or watching because my idea is that, if you see it, it’s not as big a deal.

Explain that.
Well, I think what it does is, like, if you do something, then people have to imagine it. They have to use their mind to imagine how it happened or sort of investigate, because there’s a little story with everything. And the other thing is that what they really use is their imaginations. It’s like you pass a secret around a room, it always comes back bigger than it started out; so somebody comes and sees the work, somebody doesn’t see the work so they tell them about it. It gets bigger. That’s my art.