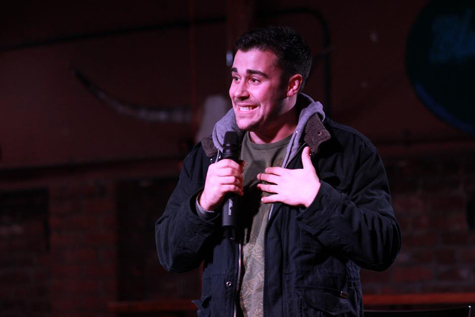 The first ever Capitol Comedy Competition is a five-week comedy showcase featuring comics from all over California battling it out for a $1,000 grand prize. The final two weeks of the showcase are Jan. 4 and Jan. 11, 2012. You’ve still got time to catch one of these hilarious shows, all of which take place at Harlow’s. Each week one winner and one runner-up earn themselves a spot in the Jan. 11 finale. The first week’s winner was Insane Wayne Jackson (from Stockton) and the runner up was Tristan Johnson (from Oakland); the second week’s winner was Jay Rick (from Oakland) and the runner up was Anderi Bailey (from Sacramento); and the third week’s winner was Stephen Furey (pictured, from Sacramento) and the runner up spot went to Leroy Stansfield (from Oakland). Week four (Jan. 4) will be hosted by none other than Sacramento’s own rising comic star, Mike E. Winfield, as well as DJ Racer X, and will feature eight comics each with a 15 minute set. There are only two spots left in the Jan. 11 finale–who will it be? The Capitol Comedy Competition is being put on by Conscious Vibes, a local events company that is coming off a huge year where they booked acts such as Dwele, Goapele, Dead Prez, Questlove, Bilal, KRS-One, Planet Asia and many others. For more information about the Capitol Comedy Competition and other Conscious Vibes events, visit Consciousvibespresents.com