Here, There and Everywhere • Chris Hardwick Brings the ID10T Festival (and a Lot More) to Shoreline 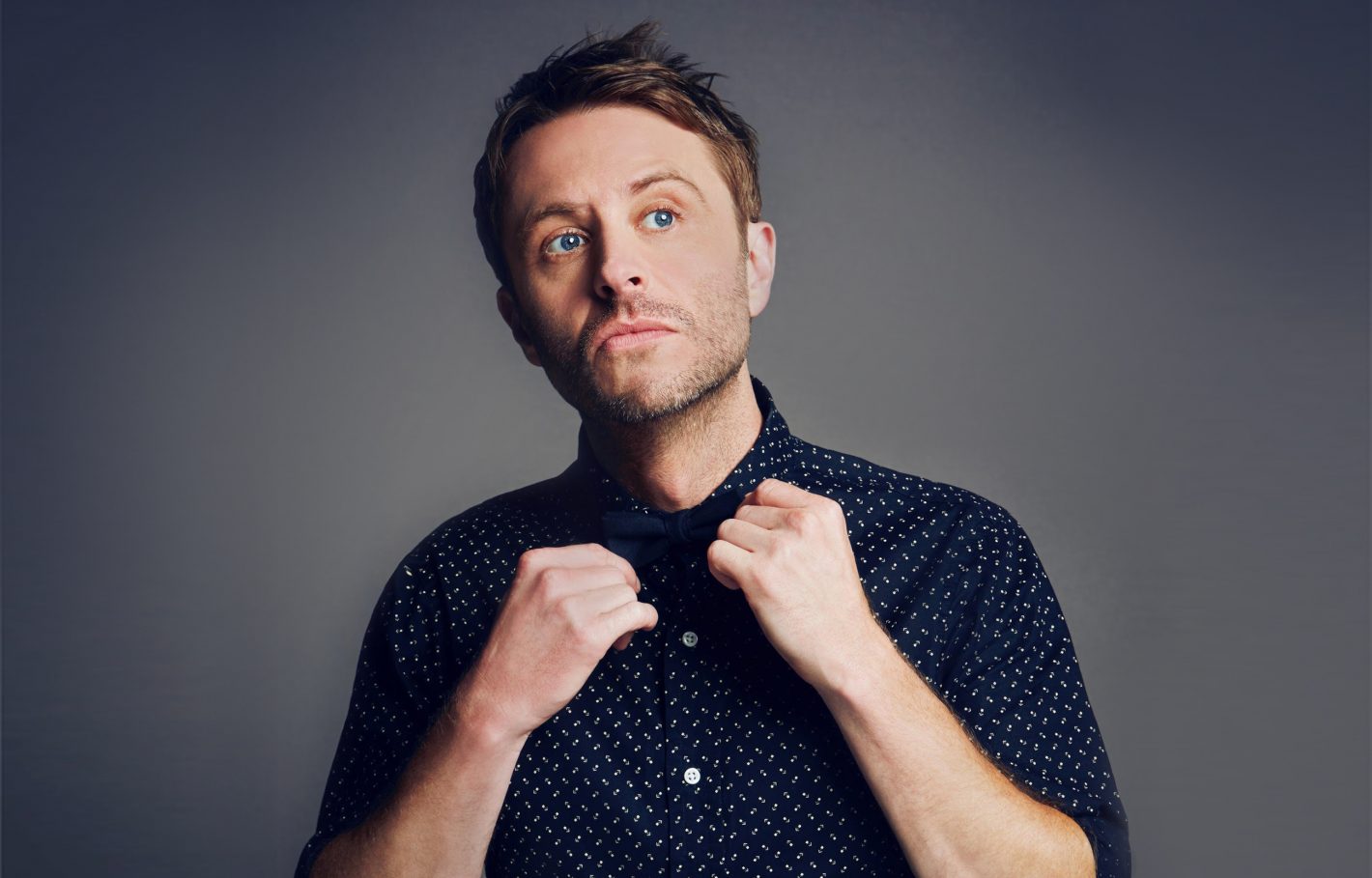 Chris Hardwick is The Flash. He performs simultaneous sets at comedy clubs on opposite coasts. He guests on Fallon and Kimmel on the exact same night. He does phone interviews three at a time by talking out of both ears. He stirred your morning coffee and scrambled your eggs. He’s actually sitting next to you right now. Or at least, he was. But really! Chris Hardwick may well be the hardest working man in comedy these days. You might know him as the host of Comedy Central’s @midnight. Or NBC’s game show The Wall. Or AMC’s Talking Dead. Or mastermind of the Nerdist podcast. Or as a prominent stand-up comedian. Or … as The Flash. And as if all that wasn’t enough to keep Hardwick satiated like a stoner at IHOP, well, he’s already moved on to the next plate of chicken and waffles—organizing/hosting the debut ID10T Music Festival and Comic Conival.

ID10T (pronounced I-D-ten-T) will take place June 24 and 25 at Shoreline Amphitheater, and will feature music from the likes of Weezer, Girl Talk, Lord Huron, Crystal Castles, TV On The Radio, OK Go and Animal Collective, as well as the comedy of Demetri Martin, Michael Che, Garfunkel and Oates, Nikki Glaser and Michael Ian Black, to name just a select few.

But Hardwick’s rise to comedic prominence was a long and winding one, starting way back in the seemingly distant era of early 1990s MTV as the co-host of Singled Out. (Yes, that Singled Out, starring Jenny McCarthy.) He took his lumps along the way as a heavy-drinking, out-of-work gamer, before kicking booze and turning that same obsessive energy toward his craft. To say it’s been an about-face would be an understatement: his Nerdist podcast has more than 5 million subscriptions alone, at this point. In hopes of digging a little deeper, Submerge caught up with Hardwick while he enjoyed a little downtime at his home in Los Angeles.

You’ve been in the comedy game for a long time now. Does the fact that you can now blend a major festival with all of these things you’re interested in, from music to Comic-Con, speak to the current state of comedy?
It speaks to the state of comedy, but it also speaks to the state of, for lack of a better term, nerd culture. Pre-2000 it was considered too niche to cross over into anything else other than regional comic-con, so I think it says a lot of culturally where we’re at.

And there’s also a renaissance of comedy happening right now. Because we’re in an age where you don’t need one of three big networks to determine whether or not you’re funny enough. We have social media, podcasts, YouTube, Snapchat and a million ways for people to get their voice out there. I think part of what we traded for that was when I was growing up there was really just super comics. You know, Richard Pryor, Robin Williams, Sam Kinison, Steve Martin! We don’t have that quite as much now because there’s so much more comedy available, but I think it’s worth the trade-off. It’s certainly something we try to do on @midnight. We’re proud of the fact that we show you 16 comedians every week … It’s very important for me to create platforms to put more comedy into the world.

What’s your relationship with political humor in the current climate? Personally, I kind of live by it. I need to get Colbert in several times a week; I need to make jokes about death and dying; black humor. But I know that’s not for everyone.
My stand-up is not political at all, and part of the reason is because everything I do with Nerdist, Talking Dead, The Wall is very inclusive. And unfortunately we live in a time when anything political immediately divides people. But I do think that comedy is such a valuable tool to subvert authority and shine a spotlight on things you’re not happy with. In some cases, comedy is the only weapon we have—a good non-lethal weapon. There’s a sort of humor backdoor into people’s brains where if a joke is funny enough, it can actually create more understanding and conversation than if somebody just came up to you on the street and started talking to you.
Particularly you’ve seen a shift in late-night—Colbert and John Oliver and Samantha [Bee] and Trevor [Noah]. It really is what’s powering our culture right now. But I’m not a political comedian. My voice just isn’t [one] that has a particularly great take on political stand-up. And the other reason is that there’s a very short shelf life on political comedy. If you put up your comedy special and it’s all political or current events, a year later no one can really watch it because the references are all stale.

I didn’t know that you had to get sober until I read a Wired piece from a few years back. I had to get sober too, and I was intrigued by your personal story. I was hoping you might talk a bit about your past lifestyle and what got you out of it.
The only thing I ever did was drink. I smoked weed a couple times in college and I never liked it because it just made me paranoid. I was already such an anxious person. I could never do cocaine because if my heart started beating fast, I would fucking go right to the hospital. But I drank a lot; I am an alcoholic. I do not have a healthy relationship with alcohol. But the truth of the matter is that label is only part of the story. That is a symptom of what is really obsessive behavior. So after several years of sobriety, what I realized was that things that I was doing in my own life, [be it] relationships that were particularly dramatic, or creating conflict and having to deal with it, it was like “Oh this is a recurring pattern of a personality disorder.” It has a little bit to do with drinking, but the drinking was just one manifestation of that. So I really do have to stay on top of it and go, “I think I’m obsessing about this thing the way I do,” unnaturally or catastrophizing. It’s something I will always manage. It’s debatable whether or not I can say to myself “I conquered it!” I’m OK with that. And because I respect that it has more power than I do, I’m always aware of what it is. And in some cases I try to use it to my advantage, which is probably why I work as much as I do. It is what it is. I don’t know if it’s nature or nurture, or maybe a little of both; it’s just the way some of us are wired.

It absolutely is. Getting back to your career, I think you’re a really excellent MC and host. But in the spirit of honesty, while I have nothing but good things to say about The Walking Dead, I always found the concept of something like Talking Dead overload, like a symptom of the 24-hour news cycle or something. But now I view it more like the postgame show of a baseball game. What’s your view of a show like Talking Dead and all the spinoffs that come with it?
I think we’re in this age of cultural narcissism where we are so accustomed to getting exactly what we want whenever we want it, that if [people] don’t like something they just think it shouldn’t exist for anyone. My feeling for a show like that is it’s really all about pulling the community of fans together who wanna talk about and celebrate and decompress from the show. It’s true that I’m not critical of the show like, “Well why did they do that? What the fuck?!” There’s a million places you can see negativity. One of the tweets I get sometimes is like “You’re just sucking AMC’s dick ‘cause they pay you! You don’t wanna talk shit!” I don’t do that about anything! They never told me I can or can’t say something! I love the show, I’m a fan of the show, I’m friends with everyone on the show, so let’s talk about stuff that we like. Let’s celebrate fandom. It’s not a takedown show. And if that’s what they want, great! There’s a million other places you can get that. For me it’s about allowing the community of people who’ve just seen something that might be very emotionally upsetting or disturbing to them, talking them back into their lives and celebrating things that we like … I used to call my friends after Lost all the time and go “What the fuck was this?” It’s water-cooler stuff.

I think there’s a knee-jerk reaction from people like myself where we might assume that producers at major networks are looking for anything they can do to bolster ratings, while we may not realize that the people running the show are into it, because clearly you’re actually into the content.
I am into the content, and I think that’s one of the reasons the show works. I wanted this job really bad. I [asked myself] after I’d been sober for a few years, what do I want to do in my career? I was just auditioning for jobs to survive, and most of them were terrible. So I was like, “You know, I’m already not working, so I’m just going to pursue jobs that make me happy.” So I did that and I started Nerdist and all that. For the first several years there was a lot of “you’re a fake nerd, this isn’t real, you’re capitalizing” conspiracy theories.

I honestly think it’s because you’re good-looking and don’t fit the stereotype.
I think I’m an average white guy. I wouldn’t devote this much of my life to something if I didn’t care about it. It makes me happy that we live in a culture where that’s an option, because it wasn’t always. So there’s no grand conspiracy. No one is fucking with you. Everyone’s doing the best they can. Of course a TV network wants to get ratings because that’s how they stay on the air, but at the same time they can get ratings without having this evil plot to take advantage of you. I think people look at a network or a company or a website and they just see this faceless entity that is only there to take advantage of them. [But] I really see the human element. This is not a two-dimensional thing. These are people, they have emotions, they care about things just like you and I care about things. And I think that’s ultimately what I try to do.

I wanted to end on something tasteless. If you could sleep with one superhero, who would it be and why?
[Laughs.] Boy, that is a tough question. It might be Professor X, because he could trick your mind into thinking it was the best orgasm you’ve ever had in your life. I feel like he could really do amazing things and it would be [an] emotional experience.