Roasting, Joking and Dancing With The Stars • Comedian Nikki Glaser Gets Ready To Torch Sacramento 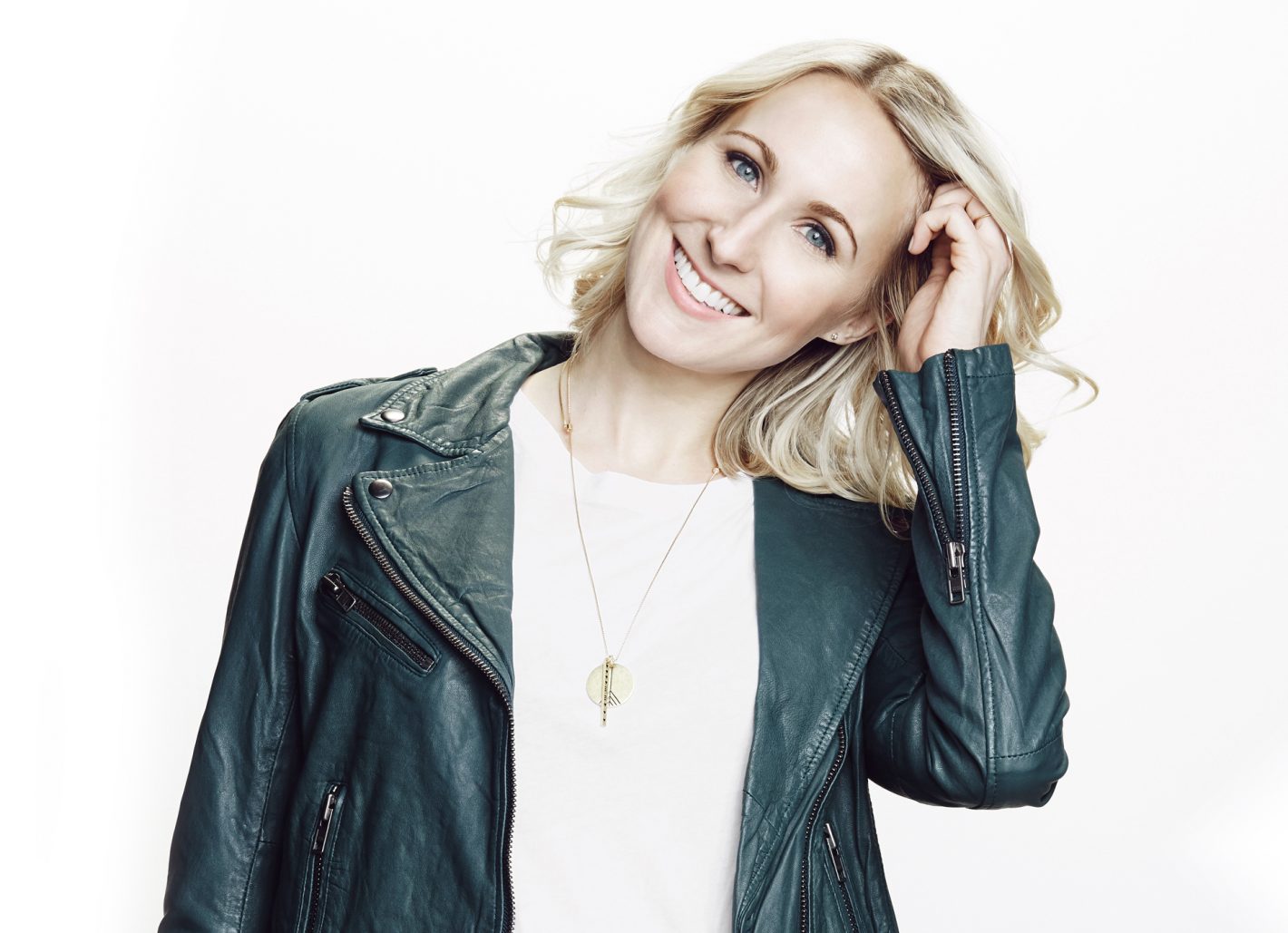 As a comedy fan and as a comedian, I’m ashamed to admit that Nikki Glaser wasn’t really on my radar until I saw her as the stand-out performer on the Comedy Central roasts for Bruce Willis and Rob Lowe. Her 2016 hour-long special for Comedy Central, Perfect, is super clever and hilarious, and her talk show appearances make me laugh as much as some of my favorite Norm Macdonald clips. She’s going to be performing at Punch Line in Sacramento on Dec. 27 through Dec. 29 along with former Sacramentan Jessica Wellington, and they are both great talents worth discovering.

Glaser started her stand-up career at age 18. Though she hasn’t seen the award-winning Amazon series The Marvelous Mrs. Maisel yet (though she says all of the comedian friends she respects love it), her rise into the art is an interesting contrast to that of Midge Maisel’s in the TV show. Glaser didn’t have to hide from her family, and her father supported her from the start. While Maisel was mortified to perform “blue” material about her family in front of her uninvited father, Glaser said she’s been able to use her parents in her act openly and with their support. Now in her 16th year of performing, Glaser has been responsible for several major podcasts, with her most current You Up with Nikki Glaser every Monday through Thursday at 7 a.m. Pacific on SirusXM’s Comedy Central Radio.

I chatted with Glaser over the phone and had a great conversation about her career, craft and her unlikely appearance on Dancing with the Stars.

Yesterday you shared a video of a tiny pig getting a bath in a sink, and I can’t stop watching it.
I know, it’s so cute. It’s going viral right now. The first time I’ve gone viral in quite a while.

Is that your pig?
No, it’s from a site that posted it and I stole the video to make a point that this is what you’re eating every day, just to remind you.

It makes me feel guilty.
That’s the point.

I listened to Perfect and loved it, and was going through some old clips that were so great like some Conan O’Brien appearances, and there are so many clever twists in your material where the jokes just keep not ending with all of these extra tags and fun surprises in them. How has your comedy style evolved over the years? Were you always that sort of comedian? You have so many layers to your jokes, where there are like five or six punch lines then a tag at the end. It’s pretty skillful and clever stuff.
Oh, thank you! That’s so nice. Well, my jokes started out as one-liners. The first prompt for myself when I began writing stand-up would be, “What would Sarah Silverman do?” I was writing Sarah Silverman jokes because my life didn’t seem interesting enough to cull from yet and I didn’t even know how to attempt to do that. I always just liked jokes. Like Demetri Martin, Mitch Hedberg or Wendy Liebman. So I started out as a one-liner and I’d always be told, “Oh we want to hear more about that subject, you just move on to the next one,” and I’m like, “That’s what one-liners are!” But then I eventually wrote enough one-liners about certain subjects that I could group together, then I had a bit. Now I know I can take on any subject, and the one-liners will just reveal themselves when I talk about it because I know how to talk like that now.

It’s funny because sometimes you hear people say, “Ah, a one-liner comic,” as if it’s something derogatory, but some of the greatest comics are that type of comic like you said.
I just love a good joke. It feels like a math problem. It’s very satisfying when you figure a joke out and you know the correlation between two things, or just a fun wording where you know there’s something fun to be had and you just crack it. I still love those kinds of jokes, but a lot of the jokes I do now come from honesty or when you pinpoint a moment that you think is specific and universal at the same time. I think when you touch both of those things it really resonates with people.

Was it a challenge to write jokes for specific people like you did for the Rob Lowe and Bruce Willis roasts on Comedy Central?
The roast jokes are a different kind of challenge because you’re preparing to do jokes that you’re only going to do once. Leading up to it, you have no real way to practice them in a way that will be like the night that you do it. Bruce Willis and Cybill Shepherd have to be in the same room and the audience has to be into it and watching them laugh at the jokes. There are so many factors that you can’t recreate any of that. That’s the frustrating part. It’s a fun, different muscle to use, but I always relate it to being pregnant. I don’t know what being pregnant is like but at the end, it’s really difficult and you say, “I will never do this again!” The two days before [the roast] is the labor part of it, the Hell, “I’m never doing this again!” It wasn’t supposed to be this rigorous and difficult. It’s nerve-wracking. Then you do it and it’s like, “This is the greatest thing ever, and I can’t wait to do it again.” It’s so much work, but it’s so satisfying.

Well, it’s one thing to make fun of Ann Coulter on stage or in your act, but to have her sit there, icily uncomfortable has got to be a whole different level of stress. It’s not something you can prepare for.
I don’t even consider that. If I start thinking about that prior to a roast, then I’m toast. I just focus on the joke because it’s such a behemoth job to arrange a set-list of 20 jokes in the right order, hitting all the right people, not hitting on subjects someone else is going to hit on, and then when you get there it’s like, “Oh, shit! I have to say this in front of them.” You’ve got to leave that panic for the last minute because your brain can’t process it.

At what moment did you decide that you wanted to perform stand-up comedy?
I was in college in my freshman year and a lot of people were telling me I should be a stand-up comedian. By “a lot” I mean it could have been one or two. I kind of looked into it because I was directionless. I thought I wanted to be an actress, but I wasn’t very good. I wasn’t getting roles. I didn’t have an exceptional talent for it. So I was like, “Fuck! What am I going to do?” I wanted to do something with performance, but I don’t have any talent that I can perform. I’m not a dancer. I’m not a singer. It sucked. I was at a crossroads and thought I was giving up on my dream of being something. Someone suggested I should be a stand-up comic, so I looked into that and everything made sense. As soon as I saw Sarah Silverman, I thought, “That’s what I’m going to do. That’s the coolest thing I’ve ever seen anyone do!” She’s not only a woman doing it but she’s the best at it, in my opinion, and that’s cool that we can be the best at something, as a woman.

I tried it once and did a great job. I felt there was no other option.

What’s one of your proudest experiences?
I’ve had so many, but I will say, not comedy-wise, but I did Dancing with the Stars and that was the most proud I’ve been of myself in general as a person. That only came about because I was good at comedy. Taking on challenges that are out of my comfort zone is obviously what drew me to comedy in the first place because it’s terrifying. But once you get good at comedy … my blood pressure doesn’t get raised doing comedy anymore. I’m comfortable with it, so I’m seeking out other thrills like that. Dancing on television made me think, “You know what? You really did it, girl! This was something you never could have imagined doing and if you can do that you can do anything!”

When you watch your comedy performance, you know how it’s going to go, but to see yourself dance on TV must be crazy.
I want to make it really clear that I have not watched my TV dance performance. I lived it and that is enough.

Oh, really? What’s it going to take for you to look at it?
I don’t like to go back and watch my stand-up. I don’t like to review the footage. I just nitpick. I like to just live in the experience of it. The only time I’ll watch it is if I think I had done a bad job because if I do, I’ve usually done better, actually. I’ll go back and watch it and go, “Oh, that wasn’t as bad as I thought!” I like to live it in the moment and feel like, “Oh that was a 9” and not risk it not being a 9. [Pauses] Really it was probably a 10.

I noticed you have Jessica Wellington performing with you in Sacramento. Have you worked with her before?
Yes. She’s a Comedy Store comedian.

She’s from Sacramento, I love her.
She’s great. What I love about Jessica is that she asks for things she knows she can execute. I think a lot of comedians are scared to ask for things. They don’t want to ask; they want to wait to be asked. I’ve learned sometimes you don’t wait to be asked. If you think you have the talent and confidence in yourself, then you’re doing someone a favor by asking, “Hey, can I open for you?” Jess reached out and asked me. Sometimes you don’t think about changing it up and having different people open for you. I really liked seeing her take the initiative and ask for things that she deserves.

Laugh off those holiday calories at Nikki Glaser’s string of performances at Punch Line (2100 Arden Way, Sacramento). She will be performing five shows in three nights, Thursday, Dec. 27–Saturday, Dec. 29. For ticketing information, go to Punchlinesac.com.