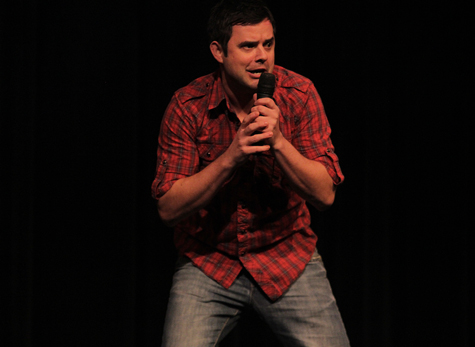 By day, local stand-up comedian on the rise Daniel Humbarger is an attorney, but at night he tells jokes about his girlfriend buying a “max-iPad” and “poop jokes that make you think.” “Dropping a few timely, witty jokes in the courtroom is always exciting,” Humbarger recently joked with Submerge, “Assuming they go over well with the judge.”

Just a year-and-a-half into his craft, Humbarger has a ton of shows under his belt and he feels like he is finally finding his “own voice” as a comedian. “I’ve still got a long way to go,’ he admits. “It’s been weird, awesome, embarrassing and incredibly rewarding. But mostly it’s just been really fun. I’m having a great time with it.”

Humbarger hosts his “Thursday Night Jive at Shine” every first and third Thursday of the month at the cozy little coffee shop, eatery, gallery and performance space located at 1400 E Street in downtown Sacramento. On any given night he’s got four to six featured comedians, both local and touring, as well as a couple slots that he keeps open for other comics who show up.

“I’ve always liked the space and thought it lends itself well to comedy,” Humbarger said of his choice to host the reoccurring comedy night at Shine. “But mostly it’s because it’s close enough that I can stumble home afterwards.”

The next installment of Thursday Night Jive goes down on June 7, 2012 when Humbarger will welcome three San Francisco comics who regularly get on stage at Punch Line, Caitlin Gill, Ivan Hernandez and Ben Feldman. Locals Johnny Taylor, Michael O’Connell and Ben Rice will also perform. On June 21, 2012 catch Clare O’Kane and David Gborie, both from San Francisco, along with locals Ray Molina and A.J. De Guzman. Humbarger hosts all of the shows rather than doing a proper full-length set. He attempts to get the crowd worked up and introduces each comic.

“It’s good for me. It teaches me how to warm up a cold crowd and as a host, you learn the show isn’t really about you at all,” he said. “It’s about setting up the crowd for the comedians coming up next. But, it’s also nice for me, because I can try new stuff and take risks I couldn’t otherwise.” Learn more about Humbarger at http://www.danielhumbarger.com/ and to view videos of his stand-up visit http://www.youtube.com/DanielHumbarger. Learn more about Shine and view upcoming concerts, poetry readings and more at http://shinesacramento.com/