System of a Clown • Comedian DJ Sandhu on Pigs and Puns 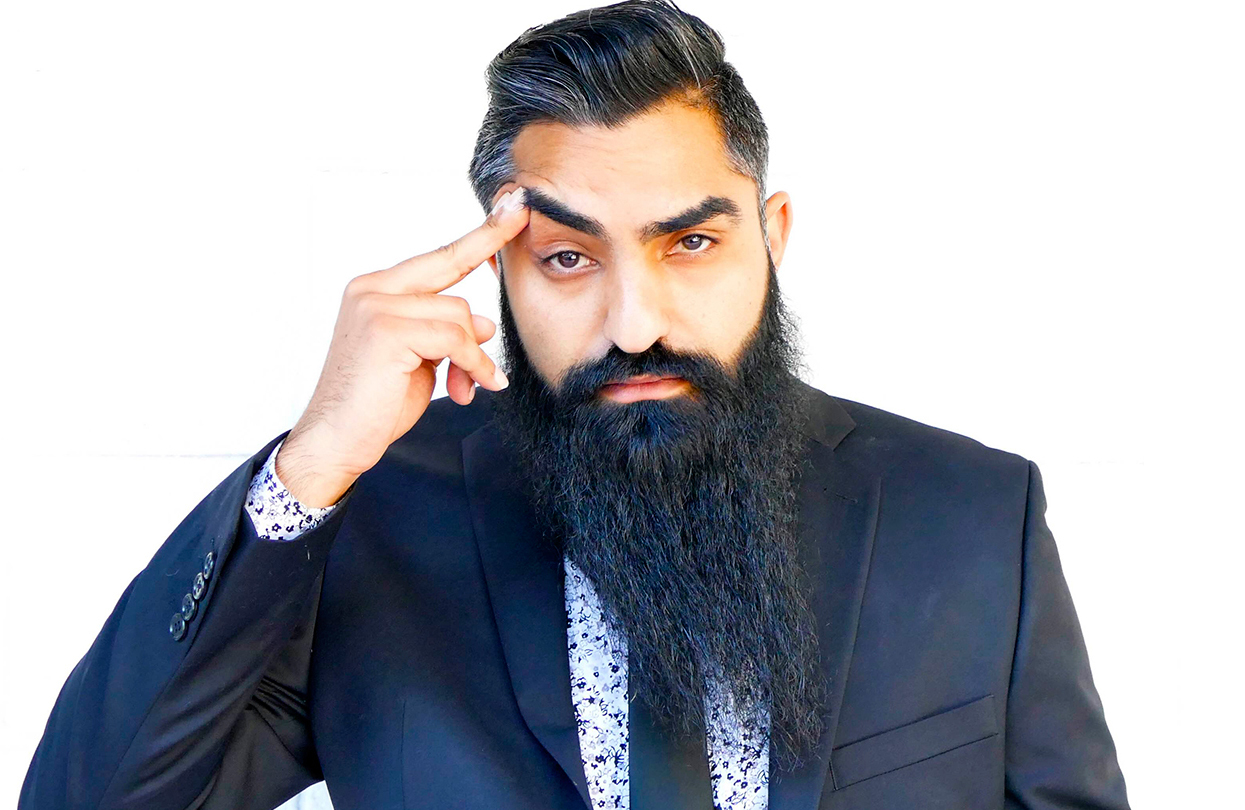 DJ Sandhu is a unique comedian who’s hard to nail down. His material can go from incredibly liberal to unexpectedly conservative stances on dating and relationships. In the last few years he’s grown out a long black beard that’s the stuff of legend. Born of Indian parents, and blessed with bushy eyebrows, he’s had more than his fair share of troubles at airports as a result. He’s told me stories of being taken off of flights in Paris because he looked like a terrorist, and flat out being denied entry into Canada while a guy with five guns was waved right in. Despite these humiliating (and expensive) travel changes, he does his best to find the humor in these situations. In one of his bits, he admits that he isn’t sure he’d want to get on a flight that didn’t give extra security screening to someone who looked like him.

He’s placed well at The World Series of Comedy for two straight years and even taught a class on comedy finance for 100 comedians at this year’s event in Las Vegas. Quick to give advice to new comedians and frequently giving visiting comics a place to crash when they come through Sacramento, he has a reputation as one of the nicest performers in town.

I spoke with DJ at The Sacramento Comedy Spot a couple of hours before we were both scheduled to perform on The Friday Show. He’s always up to something unusual, like painting his beard purple in honor of the Kings or performing in a System of a Down tribute band, but he’s reached new levels of eccentricity by getting a pet pig. And he’s adorable. 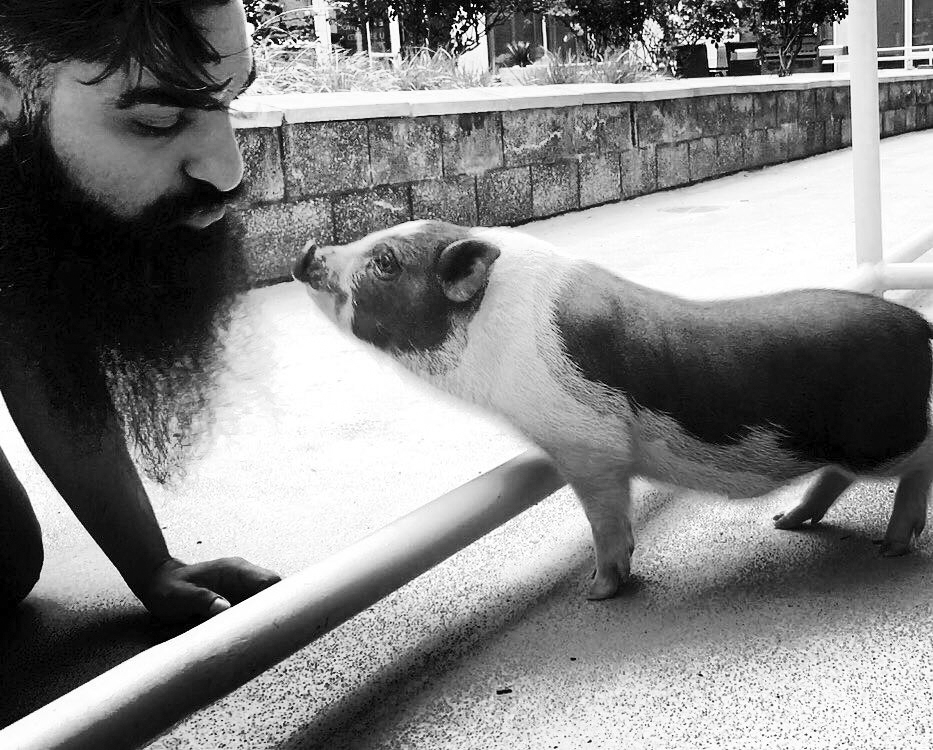 Tell me about your pig.
His name is Sir Nigel Buckingham.

How did this come about?
Anthony Krayenhagen and Chris Teicheira [Modesto comedians] did a Pretending to Care podcast when they were dumping on an article Brian Crall [Sacramento Comedy Spot founder] wrote.

The article about how to start performing stand-up comedy?
As I’m listening to it, I said, “You’re way out of pocket, and I’m going to ambush your next podcast and defend his honor.” So I went there with my girlfriend and my girlfriend said, “There’s something wrong with your pig!” Her gut was just dragging on the floor and Chris said she was pregnant. Then my girlfriend said, “Can I have one?” And she just gave me a look and I said, “Look if you want it, go for it, but it’s going to be you raising it because I’m not around so much.”

We were planning on naming it Lord Hidalgo Noriega then she decided she wanted to name it Nigel. I still wanted a title so I came up with Sir Nigel Buckingham. At the last second I tried to get her to let me name it Hash Browns, because I think that’s an adorable name.

He had a crown on when I met him a few nights ago. Where do you find a crown for a pig?
We had already planned on getting him a mini crown and cape, so the day before we got him we went to Petco to get him his bed, food and a leash, and as soon as we walked in, that outfit was at the door.
This year for Halloween I’m going to be Khal Drogo, my girlfriend will be Khaleesi and she’s going to make a dragon costume for Nigel.

What’s the biggest surprise about owning a pig?
Everyone’s always saying how smart pigs are, but I was reading about it and found out the chain of command is that number one is humans, number two is chimps and apes, number three is whales and dolphins, and number four is pigs. So they’re the fourth smartest thing on the planet.

This pig is gonna get big, right?
Probably about 200 pounds. Considering I’m 175 pounds, it’ll make me feel good about myself.
Tell me about your background. A lot of people make assumptions about you. Let’s get that straight.
I’m born and raised in Sacramento. My parents were born and raised in the Punjabi area of India. And my mom and dad moved to England when they were 3 and 7. My dad moved to Sacramento when he was 12.

So they met in England?
Just a bit, but once they turned 18 they were in an arranged marriage. My mom’s aunt is married to my dad’s uncle. There’s no blood relation, but there’s no word for that in Punjabi. So when people would ask my parents how they met, he would say, “She’s my cousin!” and she would say, “No! We are not cousins. Stop it!”

So the arranged marriage worked out for them?
Yeah. Neither of them drinks or smokes, and they don’t eat meat. They don’t have vices, so it’s not like one is sacrificing for the other.

Where did you go to high school?
Laguna Creek in Elk Grove.

Was being a comedian something you wanted to do then?
Never. I wanted to be in a punk or a metal band.

You’re in a band now, right?
Yeah, it’s Steal This Band. It’s a System of a Down tribute band. They get so mad when I call it a cover band. I guess a cover band plays a bunch of people’s stuff, and a tribute band … only [covers one band]. We’ve been together almost a year, but we’ve only done five shows. They’re all in “real” bands so it’s just something we do on the side.

You can sing. I remember we were in Marysville at The Silver Dollar Saloon after a show and you sang “Pony” by Ginuwine. I’ve heard you sing it before, too.
I would use that to pick up on women at bars. I’d put that song on and make a spectacle. I’d walk the bar top and find the biggest dude in the room and start giving him a lap dance. They always joke back with it, because you can’t hit me, I’m too small. You can’t win a fight against me if you’re a big dude, because if I win, a little guy just kicked your ass; and if you win the cops will be like, “Why are you picking on this skinny little Indian?” Then I’d go to the girl I actually wanted to get with. 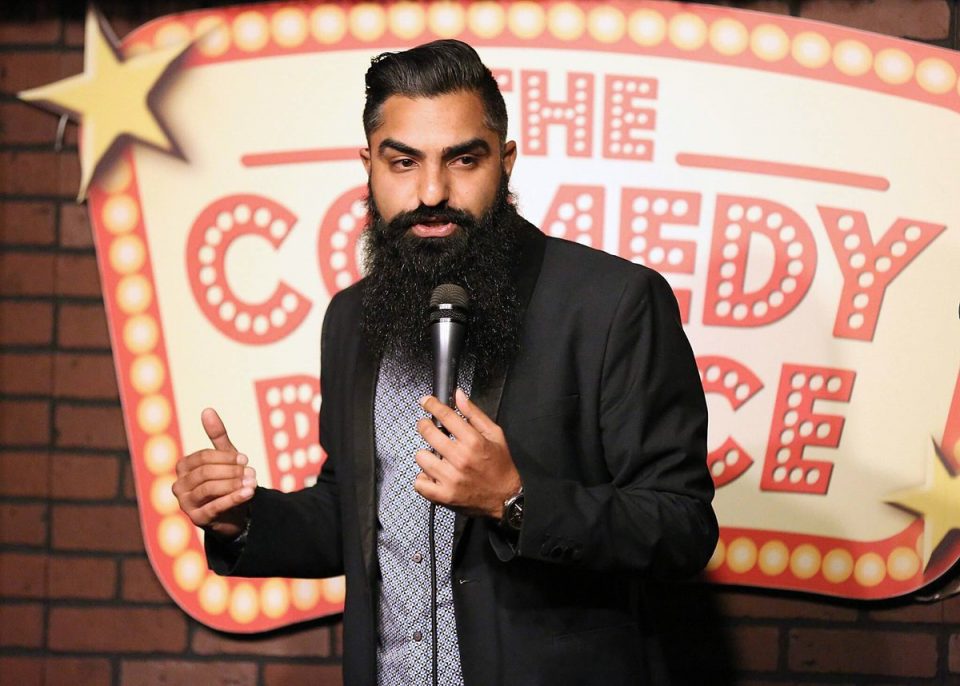 So what was the spark that got you to try comedy?
My brother went to UC Santa Cruz and they had a culture show and they got a comedian to come up from Los Angeles to close it out. They paid for his flight, his hotel and all of his food and drinks for the weekend.

Is this someone you can name?
His name’s on the wall of The Comedy Store. I don’t think he does comedy anymore. They paid him $3,000.

So they didn’t know what they were doing?
He saw them coming. There were children and old immigrant women and everyone in-between there. He’s cussing and was just super vulgar. So he turned the audience off immediately and never got them back. Later on, we’re having a bonfire at the beach and passing a guitar around and someone says to me, “Why don’t you try comedy, you’re funnier than this guy!” He heard that and started treating me different. It really hurt him. So I said, “What, do you think you’re Russell Peters?” Once he started treating me crappy, I recognized that he saw I would be able to do this.

He inspired me to perform, so I came back to Sacramento and did Laughs Unlimited’s open mic back around 2006 and performed three times with different sets, and just put a pin in it and went back to college. Then about three years later I just started it up again. I was going to clubs and watching and became friends with some of the headliners and features. I didn’t even know the local hosts. But I spent the next six months doing open mics and showcases.

I ended up getting my first day job and my first hosting weekend at Laughs Unlimited the same week. Kivi Rogers was the headliner and he was giving me advice, and I was taking it way too literal. After one of the shows he said, “That’s your stage. You don’t leave that stage empty!” What he meant was to not introduce people and walk off the stage before they get up. What I did was after the show I said, “Thank you guys for coming, have a good night!” and I just stayed on the stage until everybody got up and was gone. I was doing that for the whole weekend.