One of These Things is Not Like the Other 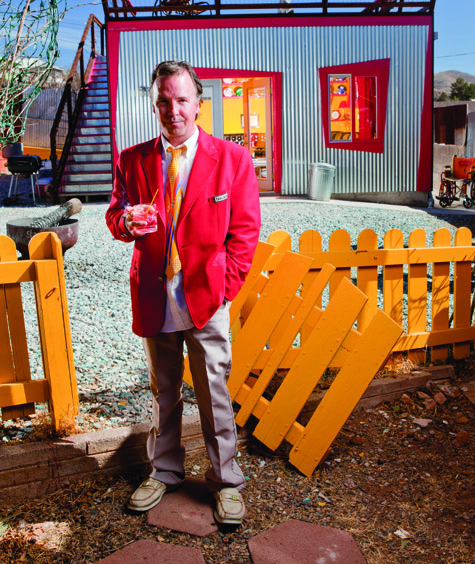 Comedian Doug Stanhope never abided by the rules, and we wouldn’t have it any other way

In one word, Doug Stanhope is polarizing. If you are a fan of his work, you probably think he is a comedic genius, unparalleled by any other active in his craft. Should you fall on the other side of the spectrum you probably think he is a vile, drunken psychotic who should be jailed for abuse of the First Amendment. It’s not a conscious effort on his part to be a polarizing comedian, though, and while ultimately he is an entertainer, he is not an actor playing a role. His ingenuity, love it or hate it, is in his sincerity. He flaunts his flaws and mocks his shortcomings, and though his views of the world may come off as bleak, they are not shortsighted shock value statements. His approach is unfiltered tact; nothing is off limits, and if you are offended, you probably shouldn’t have been listening in the first place.

With more than two decades of stand-up experience, 11 live albums and a resume that spans the BBC and The Man Show, Stanhope is no slouch. He exists within his own lane, and with a DIY approach to his profession has established himself as an undisputed comedic heavyweight. On the stage is where he thrives, and from Feb. 23 through 25, he will be headlining the Punch Line, testing out new material before he heads overseas for a tour of the United Kingdom. In anticipation of the gig, the following conversation conveniently took place immediately following the State of the Union address.

So when you watch something like the State of the Union address are you solely as a comedian, or is there a part of you that is watching as a citizen?
Completely as a comic, especially on Twitter. It was funny to watch my brain work actually. This live tweeting thing was new to me, though. It was like open heckling. To keep up with what he’s saying, and type as clumsily as I type, and then to read what others are saying so I don’t copy them, I just felt like, “Oh shit, I’m taking too long.” It was like playing bingo with too many cards, and I hate that I know what that reference means.

Do you think you could do your stage show with a John Boehner type of figure behind you?
There is always a John Boehner type behind me, and it’s the negative version of me judging all of my jokes saying, “You’ve said that before! Everyone is bored with you!” And there is a Joe Biden on the other side, the angel on my shoulder saying, “Just take the check.”

Do you ever hit dry spells or do you find that the political climate and endless stream of social bullshit provides you with enough material to never run out?
Oh yeah, I’ve been in a dry spell for years. The things that I’m passionate about start drying out, that’s simple mathematics. The longer I do comedy I start running out of ways to talk about things. Like over-population, I don’t know how to find a new angle on that, but it’s something that really bothers me. I’ve found ways in other stuff, but I can’t keep saying the same shit again and again. Over 20 years, I don’t want to fake being angry about things I’m not passionate about, #BillMaher.

One of my favorite lines of the speech was, “America is back and anyone who says otherwise doesn’t know what they are talking about.” Would you like to elaborate on that?
Yeah, I mean, it’s the exact same America I’ve always lived in. I’m 45 now, and it’s all the same shit every year. Every year we need to change something or stop something, and then I realize that none of this will affect my life. Nothing that any president has done or talked about doing has affected my daily life. Taxes, yeah maybe I have $20 more, or $20 less in my bank account at the end of the year, but it doesn’t affect me day to day. I’m sure it does some people, but they play by the rules, which I never did. I don’t mean like, “Oh, I play outside the lines, the rebel,” I just live a weird life.

Have you always been like that?
Yeah, I quit school when I was 16, but I had to live at home until I was 18 by law. As soon as I turned 18 I jumped on a train with $400 and went to Los Angeles to be an actor. That lasted four months, moved to Florida for four months. I did fraud telemarketing and just fucked off until I started comedy when I was 23.

What inspired you to blaze your own path like that?
I have no idea. I was always a weird kid. I was very similar to what I am now, which doesn’t really fit for a kid. I had a really dark sense of humor. I still have a framed letter from my school psychologist on my wall, hold on a second, let me read it. The second paragraph reads, “I very strongly believe that Douglas is in need of professional help. As you know he is extremely negative about getting help.” I was just being funny, drawing fucked up doodles. You know how you would trace your hand? Well I would trace my hand, but move three of the fingers over to the side like they just got chopped off and then make pools of blood around them. I thought it was cool. They thought I was a psychotic.

I love that you had the foresight to hold onto that letter.
Yeah, definitely. When I first got into comedy I had no press pack so I would put this letter in there and highlight the sentence I just read.

So were you the funny guy then?
No, people thought I was creepy. A couple people thought I was funny but most were creeped out by me. So I guess with that, I have the same ratio of fan base I have now. I had a cult following in school, but I was generally observed as way too dark for the room.

You have very strong beliefs and opinions. Do you want people to share all of your beliefs?
Yes, I do. Or I want to share theirs. I just see things a certain way, and I wish that was normal. I don’t like feeling different all the time. I’m not the goth kid who is dyeing my hair and putting on temporary tattoos to stand out. I want to be normal. I want to be able to put on my iPod at a party and have more than three songs play before someone goes, “What the fuck is this!?” I want to fit in and have more friends.

I feel like when people describe your work they only highlight the debaucherous side, but no one ever mentions that you are really smart, which I think is a huge discredit to what you do.
Unless you disagree with me, then I’m just a drunken idiot. That’s one thing that really bothers me, because I do think people who disagree with me will always blame it on alcohol as if I would have completely different opinions if I didn’t have a cocktail at 7:30 p.m. Christopher Hitchens was the only guy I know smart enough to overcome the [drunken idiot image]. He was one of the guys I wanted to get drunk with before I died. Him and Bill Murray. Hunter S. Thompson was fantastic, but you would never want to be him to be that brilliant, and I think the same goes for Charles Bukowski. They aren’t people you want to emulate, because you know their lives were miserable. I would rather put out shitty art and have a nice life.

Your comedy is pretty boundless. Generally speaking, do you give a fuck?
Well, I’ve become angrier which is the antithesis to not giving a fuck, but it’s usually pointless rage. Patrick Cox of Taxmasters, every time I see that commercial with his fat bullfrog throat, I get angry. I call them and accuse him of looking weird at my kid through the TV all the time. I get angry at really stupid things, and I know they are stupid, but it’s actual rage. I get more scared of people and things too. Generally, I give a fuck in a desperate and helpless way. I want things to be different, and there is no way to do it, and that makes me angry. I’ve given up hope. I don’t know if I don’t give a fuck, but I’ve given up hope.

Doug Stanhope will play five shows in three days at Punch Line Comedy Club in Sacramento beginning Thursday, Feb. 23, 2012. Shows will start at 8 p.m. (all three days) with 10 p.m. shows on Friday, Feb. 24 and Saturday, Feb. 25. Tickets range from $18.50—$23.50. You can purchase them through Punchlinesac.com or Livenation.com.