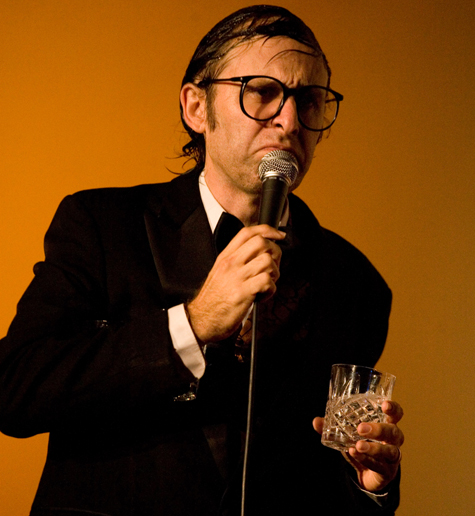 Neil Hamburger might seem as though he was freed from a cryogenic crypt. His classic vaudeville act is both archaic and a fittingly appropriate counterstrike to modern humor. In late March he returns to the Sacramento Comedy Spot. If you saw him previously and it was over your head, this article is for you. If you’ve never seen him perform and have tickets, this article is for you too.

Those old enough to remember Tony Clifton wreaking havoc on late-night television and concert stages in the ‘70s should think of Neil Hamburger as being cut from the same washed-up, beer- and sweat-stained tuxedo cloth. He’s an anti-hero with celebrity worship in the crosshairs. If at any point during his set you find it difficult to accept his reality, take comfort in knowing he’s not entirely real. Unlike Clifton, though, Hamburger is on our side rather than out to sully our evening on the town. On the phone he expressed aspirations to reach the same heights as Abbott and Costello or Laurel and Hardy, which is why he does 399 shows (allegedly) a year.

“Certainly would like to get the point of the same recognition as those guys,” he said. “It was a good situation for Abbott and Costello. What wasn’t so good was when they passed away. That was a problem for them. Fortunately, they’d done quite a few things before that we’ll always treasure.”

On stage, Hamburger is a glum, middle-aged, tuxedo-clad man, with greasy comb-over hair, awkwardly sized glasses and a rasp magnified by a ghost lodging in his throat he perpetually pauses to clear–as if he’s working up a world record-tying loogie. As real as he appears, he’s an act finely tuned over a nearly 20-year span. Before there was Hamburger, there was Gregg Turkington, a punk rocker and label head from Australia. He’s practically dead these days, consumed by the Hamburger persona; so dead, I insisted clarification on precisely who I would be speaking with–Neil or Gregg–before accepting the assignment.

Talking to Neil, I wanted to ask, “Is Gregg there? Is he somewhere in there? Can Gregg come out?” like I was a psychiatrist coaxing a multi-personality disorder patient to let me speak to the host. I didn’t though, because talking with Neil was too much fun. He was professional and just as uncertain about expectations as I was. When we wrapped our interview his parting words were:

“Good luck. I hope I was able to give you the answers you were looking for. You never know what people need. I do hope this leads to some sort of prize or some sort of award for you. I do appreciate the time.”

It was unexpected, considering Hamburger is notoriously cranky. If an audience member doesn’t respond to his inquiry, they are dubbed a “zipper lips.” If an unruly heckler dares challenge Hamburger, relentless throat-clearing sounds drown out their end, until Neil is ready to fire his snarling comeback. On his show Poolside Chats, call-ins are futile and mostly result in Hamburger shouting obscenities at a phone and slamming the receiver. But, the afternoon of our chat, Hamburger was pleasant, since he considered me to be “a nice polite and reasonable person with some good questions.”

In a lot of the clips I watched leading up to this interview you seemed to be quite cranky. I was somewhat nervous about this interview, considering how you respond to phone calls on Poolside Chats.
Well I think it depends on what you get. If you get someone throwing old frozen waffles at you and yelling out your punch lines, well the crankiness will set in. It also depends on the time of day. It’s certainly easier to be cranky late at night or early in the morning. During the daytime when I’m just driving from show to show, it’s a pretty pleasant day out…so I would say no, I’m not cranky right now.

You seem to thrive off the shouts from hecklers. I feel as though your style baits them some. Deep down do you love it?
I wouldn’t say I encourage, but I’m prepared for them. Honestly some of these hecklers are just so witless and plain annoying that there’s no reason to encourage that. Some of these people are committing the equivalent of crapping on the floor of the nightclub, you know? Somebody has something clever to say that’s a whole other story, but that’s not always what you get.

Plus what a comedian finds clever and the average audience member finds clever probably greatly differs.
Well, let’s put it this way. When you get guys that come out and they go on YouTube and they see the show from the night before and they come out to yell the punch lines ahead of time. That’s not really heckling. That’s just shitty. Nobody cares for that. So those are the sorts of folks I’m talking about that we have no use for.

Do you have any new comedy records coming out?
We just did one with Jack White, you know? It just came out last month. There’s a couple 7-inch singles as well. So yeah, lot of new records.

What was it like working with Jack White?
The man is a true professional and knows what he wants. He knows how to put on a great event. We recorded it live, and he’s got a studio there in Nashville. We did the show and it came out as a record in a very quick turnaround. Just an all-around pleasure. I wish there were more folks in the business like this, but as you know a lot of them aren’t. You get your Britney Spears and this sort of garbage. It’s not always so nice.

You’ve got a couple film roles coming up. You’re in Hamlet A.D.D. What was it like working with Shakespearean material?
It’s a strange film. I haven’t seen it, but it’s an animated film with live actors. I guess, they do it with this modern technology and you’re interacting with cartoon characters. It’s hard to say. It was fun to be a part of it. We were in front of a green screen. Certainly, I was not actually interacting with these cartoons, but I will be when it comes out. That’s something to look forward to.

You got your start doing prank phone calls. Do you ever do them now for nostalgia’s sake?
You know, sometimes I’ll get on the phone and do an interview or order a pizza or something. Nowadays, you get the death penalty for making prank calls, so you really can’t do that anymore. They changed the rule. It’s instant death.

I was unaware of that.
Oh yeah, check the news. You’ll see. I guess they prosecuted the first couple people and started the executions. There are some human rights activists and things that say it’s a bit extreme punishment, but you know, unless it goes to the Supreme Court and is overturned, that’s what we’re stuck with.

What celebrities are in your crosshairs these days?
Well, they all are really. Most of these folks are not the best people you may come across in your travels. A lot of these people are really quite unpleasant, quite overpaid and overexposed. Some of these movies really break your heart, if you get a look at this junk. To see these people thriving off poisoning our children with their bad films and their bad everything, that will break your heart again. Some of the bad music, I don’t know if you’ve heard some of this music they’ve got… It sounds like somebody crapping into a porcelain bowl. You know, they put a techno beat over it and that’s the new hit single. I’m sorry, that’s not my idea of a good song.

Neil Hamburger will play the Sacramento Comedy Spot on Friday, March 30, 2012. Tickets are $15 and can be purchased through http://saccomedyspot.com/. If you go (and you should), do yourself a favor, and leave the jokes to the professional.