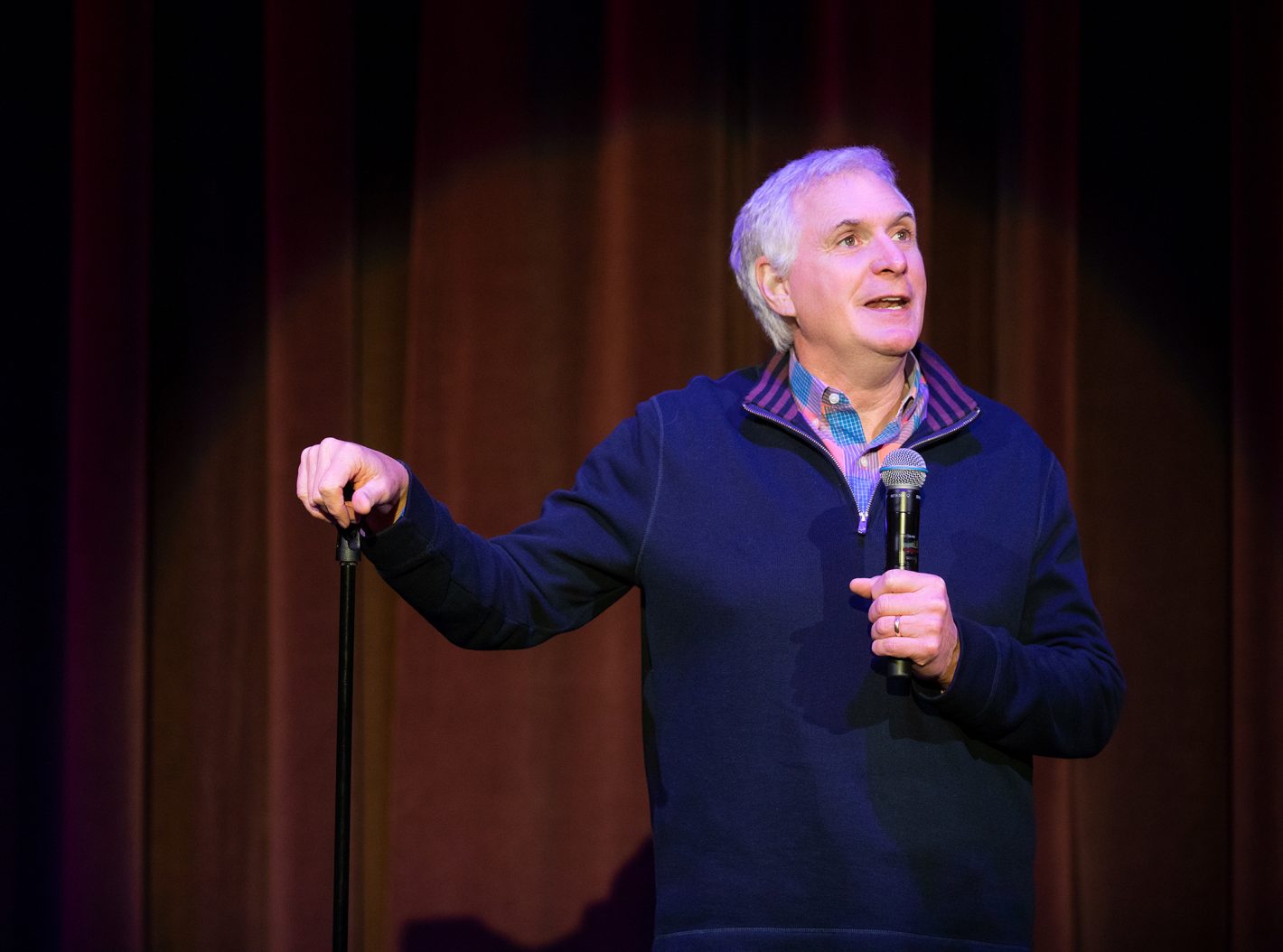 The comedic presence of Jack Gallagher is the sort of natural charisma one gets from a beloved family member. Where one comedian might take the stage and rush to fill every inch of empty space with their self, grabbing fists and armloads of attention like a gameshow contestant in a cash cube, Gallagher shrinks the distance between him and his audience, bringing them into his experience gradually, his narrative never bearing a whiff of a set-up. When you laugh, it’s not just because he told you about a funny thing that happened; it’s funny because it happened to him, and by the end of his disarming, revelatory sets, you feel like you know him well enough to have lived it alongside him.

Storytelling has been a key trademark of Gallagher’s comedy since his days on the Boston scene during the stand-up gold-rush of the 1980s, but it wasn’t until midway through his life that he worked his longform style into a series of one-man shows that have left few stones of his life unturned. The earliest of these, Letters to Declan, coming after the complicated and nerve wracking delivery of his firstborn son, tackled a newfound sense of mortality brought on by fatherhood, and the need to leave something tangible behind for posterity. The comedian’s raw vulnerability, paired with his knack for balancing gravity and levity, made a big impression. Network scouts saw in it the potential for a sitcom, which was well under way with six episodes and several years of development in 1995 before the plug was suddenly pulled—an experience later woven into another illuminating one-man project.

Since then, Gallagher has rarely slowed down, appearing in everything from commercials to public television programs (where you can see him do everything from discussing personal finance to flying jet fighters) to a recurring role on Curb Your Enthusiasm. Since 1987, Sacramento has been his home base.

“I’ve never been crazy about L.A.,” he admits. It’s here in Sacramento that one of his most fruitful and long-lived artistic partnerships has been forged, with The B Street Theatre. The facility has given him near free-reign over the years to explore intimate topics with a live audience, among them the trove of personal recordings his father left behind posthumously (What He Left); the emotional journey he took upon his younger son’s diagnosis of autism (A Different Kind of Cool); and grappling with recovery and newfound memory problems after a serious bike accident (Concussed). Treated as a series, the curve-balls thrown into Gallagher’s life seem to move toward a central idea, and possibly his greatest talent: that of picking up everything that life gives him and treating it with empathy and introspection, letting the heart bleed and the mind wander a bit, if only to help himself and others step back and see the greater picture.

Now, the series has come full circle: The subject of Gallagher’s first show, Declan, is now in his late twenties and taking an active part in the composition of his father’s latest work, A Stand-Up Guy. The show loosely traces four decades in the business, recounting gigs high and low, from office parties to the stages of the late night pantheon. We caught up with Jack to get a preview of the journey he’s prepared for us.

You’ve described yourself as being shy as a child. How does that translate into everything you’ve become since then?
Yeah, I was really shy as a child. I’m still not incredibly social. I don’t like parties. When you’re on stage, you’re in control. There’s nobody asking you questions, there’s no awkward silences in the conversation, you don’t feel like you’re not holding up your end of the bargain … When I’m on stage, I’m in charge.

Was there a specific epiphany in your youth where you found your calling?
I had an uncle that was a comedian. He was part of a comic team, and I used to get to go to see him every once in a while, but I also used to love watching the comedians on Ed Sullivan. I’ve thought about it a lot … I don’t know why, as a shy person, not a good student, not a good athlete, it was a way for me to sort of step out from the crowd a little bit. I like the sound of jokes—the rhythm. I like to make people laugh. I never thought I would do it as a career. I was teaching at a boarding school, and at the same time I was doing stand-up, and it came down to me doing one or the other. I thought I’d end up doing stand-up for two or three years, and then the craze would be over, and I’d go back to teaching. But I just kept moving along.

What’s the charge you get from a one-man show versus stand-up?
Well, this one is different from other shows I’ve done. The other shows I’ve done are written to be sort of an emotional rollercoaster. With A Stand-Up Guy, this show is just a journey of my stand-up career, stories about people I’ve met on the road, how to build an act, the first time I did The Tonight Show, stuff like that. When I wrote Letters to Declan, that was the first time I’d been on a stage for that amount of time without getting any laughs—on purpose—but that was really difficult to adjust to. As a comedian, without getting too technical about it, you want to have a certain amount of laughs per minute … You want a laugh every 20 seconds, and I’m going two minutes without a laugh, because I’m talking about my sister dying! But still, in my head, there’s a part of me thinking “Shit! They’re not laughing! I gotta get ‘em back!” Once I got used to it, then I got to enjoy this other type of ride. I know I still have the audience, just on a different level. They’re not laughing, but they’re listening. Plus, I’m working in a theater—these are professionals. I’m used to working in comedy clubs where you’d literally have to beg the bartender not to run the blender during a punchline!

How was the experience of cowriting your latest show with your son?
I’ll write a draft and send it to Declan, and he’ll recommend moving something from one place to another, you know, improving the chronology, pointing out that one joke works better in front of another joke. He wrote the very first line of the show, which was on page three, but he insisted, “This should be the first thing they hear you say.” And it was. We just go back and forth. It worked pretty well. These shows are pretty hard to write, because you write something, you wake up the next day, you read it and go, “What was I thinking! That was a piece of shit!” And you delete the whole thing and start again. With Declan, I’d give it to him, and he’d be more constructive, point out what was good, what could be kept. And I’m his dad, so take it with a grain of salt, but he’s very smart. He’s very funny, he knows where the joke is, he knows where to find it. It was just a real joy to work with him. He lives in Brooklyn now. I don’t know how well it would’ve worked if we were in the room together!

What’s the story behind your first one-man show becoming a sitcom and then sparking the relationship with B Street Theatre?
The second show I wrote was about that experience. It was called Just the Guy. Because after the show was cancelled out of nowhere, I was in the car on the way to the airport to go to New York and be on Regis and Kathy Lee, and I got a call telling me to come back to the studio, the show had been cancelled. I couldn’t find out why. Very typical Hollywood story. There’d been some infighting, and they sort of used my show as a pawn to rectify this political situation. Just the Guy referred to something the vice president of programming said in our conversation—”I don’t know why you’re so upset about it, you’re just the guy it happened to.” Like it had nothing to do with me … So in seven days, you go from the prospect of having more money than you know what to do with, to going back to some dimly lit club in Akron, Ohio. It takes some muscle to say, “OK, fuck you. Let’s pick it up and move it forward.”

Are there any particular tales of a bad gig you can recount?
I did a cruise once, and they hated me. It was 30 minutes of silence and staring. I was stuck on a boat with them for the rest of the week!

How would you sum up your feelings about making a home in Sacramento and having a decent career?
I hate it when it’s 110 degrees, but other than that … I’m just very lucky, very happy where I am. I just turned 66, and you have a tendency to look around and think, “This isn’t gonna last forever.” You start thinking of what you’d like to do that you haven’t done, or what you’ve done wrong that you’d like to rectify. But coming to live here was not a bad decision …

I’ve been doing this for 41 years now, and no one knows my name, but I’ve made a living at it. I have friends who are very well known, and it’s hard for them to keep their anonymity. I’m not saying I wouldn’t have liked to make a million dollars doing something, but I like being able to fly under the radar. As my friend Bobcat Goldthwaite would say, I’m not the kind of guy that’ll go to the opening of an envelope.

Jack Gallagher’s new show, A Stand-Up Guy, will run at B Street Theatre (2700 Capitol Ave., Sacramento) now through Oct. 20. For more info and to order tickets, check out Bstreettheatre.org.