Kathy Griffin Wants a (Minor) Protest • At the end of the day, Kathy Griffin just wants to make people laugh. Or piss them off. 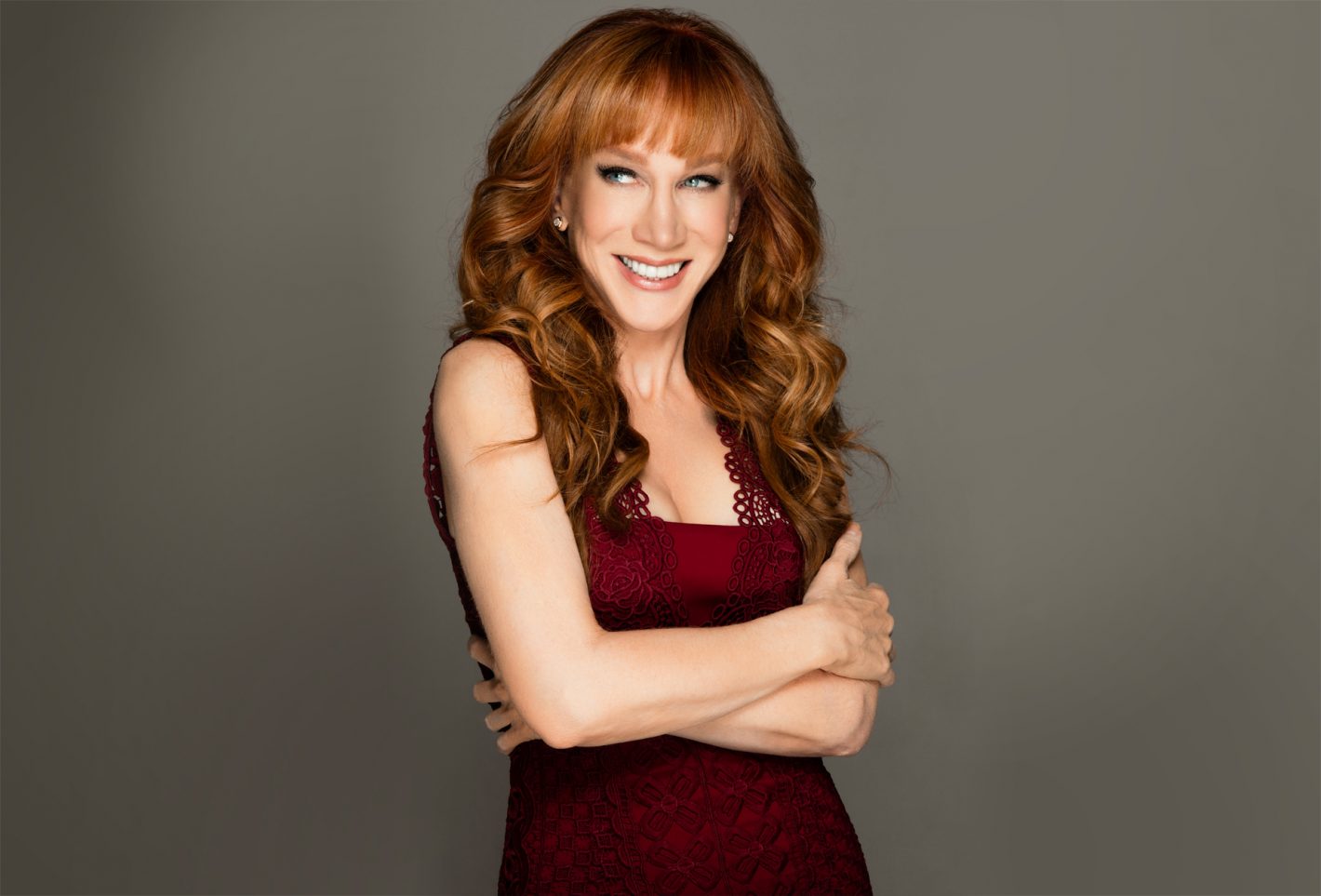 When Kathy Griffin calls me, I have a list of questions I plan to ask her—about her new tell-all book, her tour, her feelings on body image (Griffin is outspoken about her history of plastic surgeries and a near-fatal reaction she had to one of them), and even to make a joke about the fact that my middle name is “Griffin” and my sister’s name, Maggie, is the same as her mom’s (which basically make us, like, related)—but our conversation starts off immediately with something I wasn’t predicting … Donald Trump.

“I don’t know if you heard,” says Griffin, “but they just passed this fucked-up health care bill … It’s just crazy, the world we live in now.”

She gets serious before adding, “I mean, I’ve got to keep track of the Kardashians as well as the Trumps—there’s a lot of families I have to keep up with now!”

Known for her pull-no-punches approach to comedy and inability to hold back when it comes to her thoughts on celebrities, religion, politics and sexuality, Griffin has built up an impressive resume, from co-starring in the hit TV show Suddenly Susan, to her long-running reality show on Bravo, Kathy Griffin: My Life on the D-List (which landed her two Emmy awards), to recording Grammy-award-winning comedy albums, to landing on the 2013 Guinness Book of World Records for writing and starring in an unprecedented 20 televised stand-up specials, to hosting the highly-rated CNN New Year’s Eve special with Anderson Cooper since 2007. Kathy Griffin is nothing if not committed to her act.

“Do you know who my neighbors are?” She quizzes me: I admit that I’d spent the past 24 hours internet stalking her.

“Kim and Kanye!” I squeal, giddy to know the answer.

“I am such a committed artist that I moved next door to my act,” she laughs, noting how awkward it is to live next door to one of the most noted couples in pop culture. “Not a lot of comics can say that. It’s hysterical. Half the time we’re running around closing our curtains and then there’s this awkward wave … but I think they finally get it.” Kim and Kanye are used to Griffin’s comedic jabs in their general direction, and take it in stride. “But if they move, I’m moving in next to Ryan Seacrest.”

I mention Kanye’s less-than-favorable visit to Sacramento last November when the artist walked off stage after a bizarre rant that left fans scratching their heads and asking for refunds. Griffin added that she hopes to stir up a little controversy during her visit, and is hoping for a protest—but maybe just a small one.

After admitting that Grass Valley (where Griffin will perform on June 16, 2017) is more progressive and liberal versus Trump-loving-conservative, Griffin is disappointed. “You mean I’m not going to be protested by anybody? Don’t you have friends? I’m going to turn into my mother, here—what if I give you girls $2 each and you just walk around carrying signs that say, ‘Kathy Griffin is Dangerous!’ and my ticket sales go through the roof! Damnit, I want a protest!”

Griffin admits that every time she performs in Kansas, she is protested by the Westboro Baptist Church (you know, the folks famous for their “god hates fags” hate speech? Yeah, those guys). She says the first time she saw them she was legitimately scared for her life. She called her friend (who happened to be Dave Grohl of the Foo Fighters … lucky), and he told her he found them truly “sad” and harmless. He then said, “Honey, you’ve arrived.” So now she sits back and enjoys the “minor protests,” because sometimes people show up to counter-protest in a “way that is hilarious.”

“None of the Trump family—and that includes Eddie Munster [Don Jr.] and Eric—I just call him ‘Date Rape,’” she says.

I ask her how she came up with that one.

“It’s a full name,” Griffin jokes. “First name Date, last name Rape. You know, like when Gwyneth Paltrow looked at her baby and said, ‘She’s so sweet I’m going to name her Apple?’ I just look at Eric Trump and I think, Date Rape. I don’t know if you even can print that in Submerge …” (Yeah, editors, can we? Please?) [Editor’s note: We’ll have to ask our lawyers.]

“I think old people like when white people shout at them,” she muses. “My mom is half deaf now and I think they feel comforted by that.”

Scientologists may also want to consider skipping (or protesting!) Griffin’s show—although she is hesitant about this one and it takes some convincing her that I am not a Scientologist (or ‘Sci-Ti’, as she calls them), nor am I speaking to her from Clearwater, Florida (look it up, trust me, it’s fascinating), and the Kardashians may want to stay away because “the material may not exactly go their way …” says Griffin.

So what can we expect from a live show? Griffin says that it’s not a typical book tour—her best-selling book, Kathy Griffin’s Celebrity Run-Ins: My A–Z Index, came out last November—and that fans willing to spend their hard-earned dollars on her book deserve two hours of brand-new material, which is what they’ll get.

“You should have a disclaimer. An evening with me is not going to be Stomp or Mama Mia or Blue Man Group,” she warns, “It’s gonna be an evening of vulgarity, negativity—and there might be some rage.”

While Celebrity Run-Ins reads like a hilarious tell-all of the sometimes bizarre and awkward interactions she’s had with people such as Woody Allen, Amanda Bynes, Bryan Cranston, Barbara Walters and yes, Donald Trump, to name a few—I ask Griffin if she has a celebrity that she’s dying to meet. Had she met them all already?

“You’re going to make fun of me, but it’s President Jimmy Carter,” her voice dips. “No one ever gets it. I know he’s like 100, but I think he was an amazing president that tried to change the world and I feel like he gets a bad rap,” she says, in all seriousness. “Or, you know, Verne Troyer.”

Bring your picket signs to Kathy Griffin’s upcoming show at the Veteran’s Memorial Auditorium in Grass Valley on June 16, 2017. Or, just buy a ticket (starting at $42 for members/$52 for the general public) by pointing your web browser toward Thecenterforthearts.org.

[Editor’s note: As of Wednesday, May 31, 2017, Kathy Griffin’s show in Grass Valley has been cancelled due to backlash over a photo that went viral of the comedian holding a fake Donald Trump head. Read an explanation from the venue at The Center for the Arts’ Facebook page.]