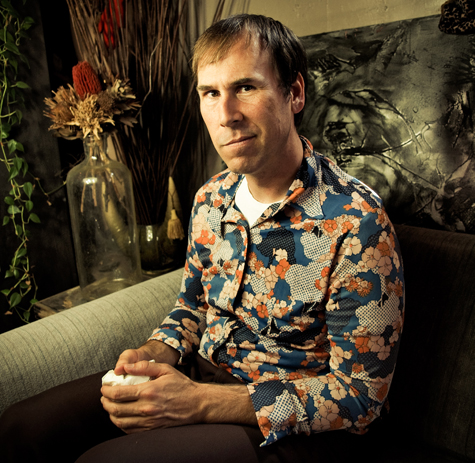 A drawing of four naked human female torsos with rabbit heads is not the definition of marketing genius, but it could be. At the bottom of the DVD box it reads, “How great is this DVD? You haven’t even opened the box and you’ve seen a bunny rabbit with boobs.”

Keith Lowell Jensen’s comedy CD/DVD Cats Made of Rabbits was recorded at the Sacramento Comedy Spot two years ago, but its content remains timeless, save for a Jonas Brothers reference. I want to tell you the juvenile humor ends on the box and that Jensen is a thoughtful comedian, pushing the envelope of correctness (which he does) and subversively challenging our values with humor, but then I think about his duck vagina bit and think better of such grandiose statements.

He’s an atheist (and has a wife and child–guffaw), so he is often referred to as the Atheist Comedian, mostly on the Coexist? Comedy Tour, but Jensen’s compulsive interest in all things worthy of critique keeps the nasty “pigeonhole” effect off his back. In discussing his next album, Jensen said he had 45 minutes of material on things he’s been arrested for and jobs he’s been fired from, as well as over an hour of observational comedy. Once in San Francisco he threatened to do an entire set of racist jokes strictly based upon the characters in Lord of the Rings, which is possibly the finest testament to his multi-dimensional talent. “I didn’t intend to be the Atheist Comedian, but that’s what I am on the tour,” he said. “It just sort of happened. It feels very true and feels like I’m talking about very important shit, so that’s cool.”

Jensen knows there are gigs he won’t book due to his atheism, but he casually sidesteps the haters with a “fuck that bigot” attitude. “The gay comics or a black comic, they don’t have the choice of not being that,” he said. “It’s who they are. This is who I am. Even if I wasn’t doing my atheist material, those same people wouldn’t appreciate what a liberal I am or what a geek I am. Those things all kind of go together.”

Did having a daughter shake up your atheism at all?
Not even a little bit. In fact, having a daughter has not impacted my life as much as it has impacted every other parent I’ve ever known. I suspect that part of that is because I’m in my late 30s. My wife and I have been together for 14 years. We’ve settled into our lives a little more than most people who are having babies.

Some comedians have said that happiness is the worst thing that can happen to your career.
I think that’s bullshit. You know, when me and my wife met, my romantic first words to her were, “How can you say something so fucking stupid?” I still remember the debate we had. We argued for two hours straight and were best friends by the time we were done.

Political humor can be alienating and risky. Outside of comedy you’re a very opinionated person, particularly in your blog and Facebook posts. Have you come to any conclusions on whether it has a place in your material?
On Cats Made of Rabbits there is politics in there, but it’s hidden. On the actual joke “Cats Made of Rabbits” I tie “shock and awe” and the Trail of Tears to the Holocaust, and people who would be offended by it don’t even catch it, it’s said so matter of fact. I just give a list and those three are on it. It’s not making a big production out of the political statement that’s within that joke. And of course there’s a vegan joke within it, regarding how we base which animals are OK to kill based on cuteness.

Is your writing process thought out, in that you intentionally weave that many political statements into one bit?
It happens subconsciously out of me being insecure. A lot of writing happens on stage where I am surprised something came out of my mouth.

You strike me as an obsessive consumer whether it comes to comedy or music, but that collector side of your personality does not translate to the stage. Have you ever considered letting the nerd flag fly more in your material?
I have a lot of material about Lord of the Rings right now. I don’t know why now. I think maybe excitement about The Hobbit. I just re-read the books. I’m also telling my daughter the Lord of the Rings story, only in our version the Orc “scratched” instead of “stabbed”–she’s 2.

Then again, I was talking to the audience about [Doug E. Fresh] at the Comedy Spot a few weeks ago and nobody knew what I was talking about. I said you have to be kidding me. That’s ridiculous you guys don’t know Doug E. Fresh.

It would seem that Sacramento’s comedy scene is stirring with talent right now; much like our music scene has had little pockets of glory. Given that Mike E. Winfield will be on the next season of The Office, does it feel like an opportune time to be a comedian in Sacramento?
Yeah. It could be. There were periods with music when the Deftones and Cake and Papa Roach and all these bands in a short span of time all took off out of Sacramento. It sort of put Sacramento on the map. I feel like that could be happening with comedy mostly from the perspective of, boy, we have an awful lot of really good comics here. We just have a phenomenal bank of talent in this little town.

It’s interesting that Mike E. is staying. He’s on The Office! I was thinking well, there he goes. Bye Mike. But, nope, he’s keeping his place in Sac. He’s in Los Angeles a lot, but he’s keeping his place here. I like that a lot. Ian MacKaye from Minor Threat is one of my heroes, and I like that sense of your own community, and you don’t have to betray it to be famous.

Will the next string of dates in the fall be your first time out on tour alone?
This is the first time I’ve gone out and every day it’s just me and I’m the headliner.

How are you internalizing that?
I have shingles. You don’t normally get that as young as me.

Yeah, my grandma has shingles.
I wonder if I’m more nervous than I realize. I feel all right, but then again I did get shingles.

Have you found the humor in that yet?
Just now [laughs]. I’ve broken my collarbone before and so I know it’s going to stop hurting eventually. It’s not like the first heartbreak you get when you’re a kid, and you don’t know if it’s ever going to end. Now it’s like, “Ah, I’ve got to wait this out. Didn’t want to do this right now, but…”

I don’t get nerves that bad anymore. I got stage fright for the first eight years and didn’t think it would ever go away. If there’s anything I think you should say to comedians before they go on stage that might help it’s, “You know there’s not really that much at risk.” You’re going to get up and do what you’re going to do and then later you’ll get up again. 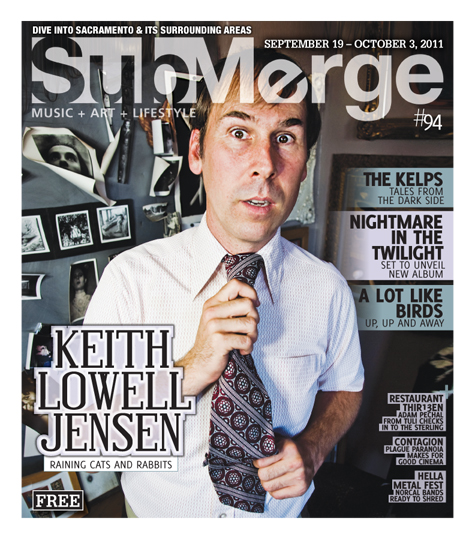 Keith Lowell Jensen’s Cats Made of Rabbits CD is out now and available to own on Amazon.com. It can also be purchased digitally on iTunes. His DVD of the same name will be available Sept. 27. Jensen will perform a CD/DVD release show at the Sac Comedy Spot on Sept. 23 at 8 p.m. (tickets are $18). You can also catch Jensen do his thing the following Thursday, Sept. 29, as part of the Sacramento Comedy Festival, once again at the Sac Comedy Spot. More info and tickets for both these performances can be found at Saccomedyspot.com.