The Proof is on the Stage • Lance Woods, Humble International Sex Symbol 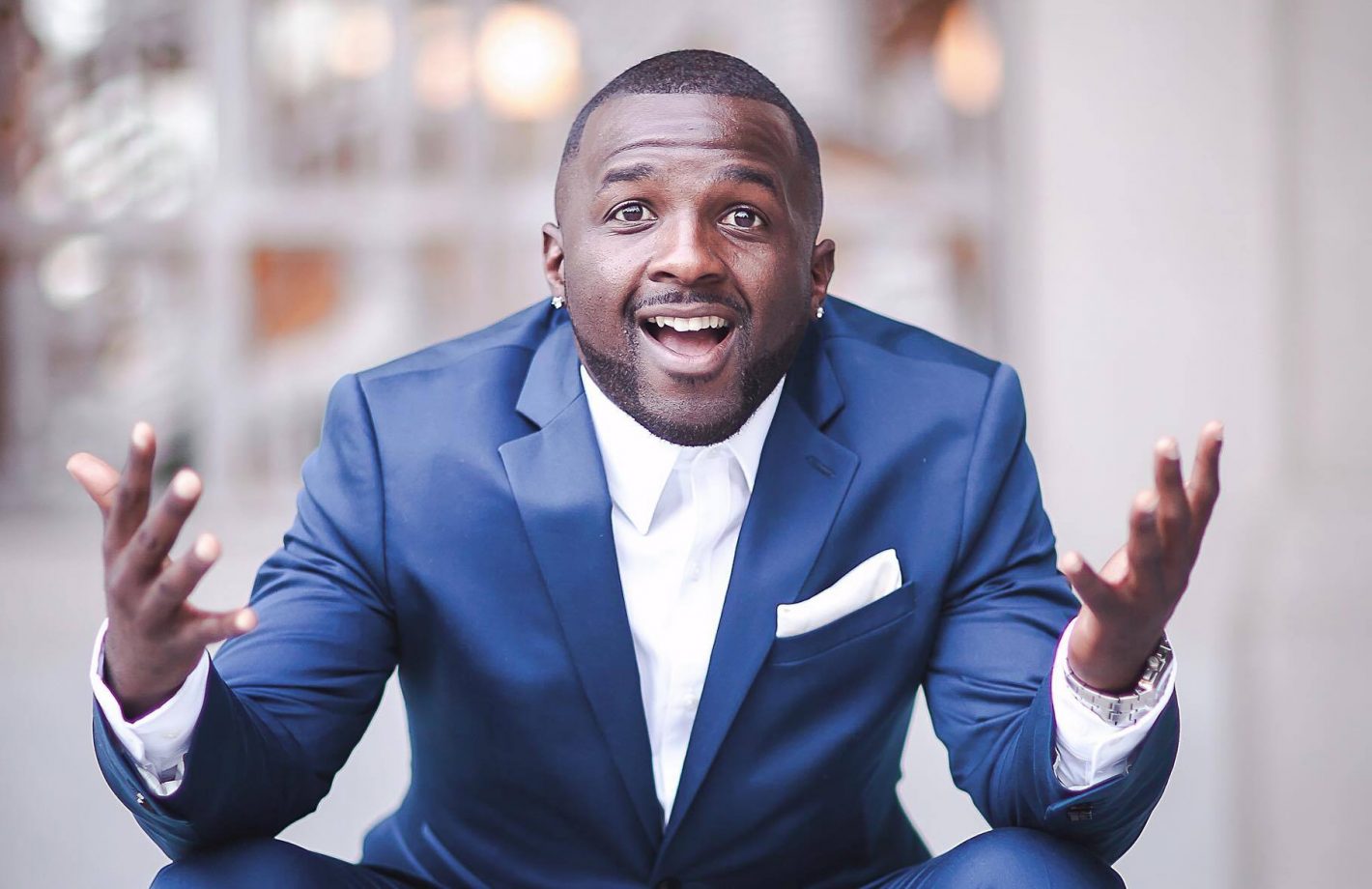 Lance Woods is a comedy force of nature. In just seven years of performing stand-up, he’s gone from hosting variety shows at his church, to opening for Dave Chappelle and hosting parties for Too Short on Treasure Island. His “Lance Woods and Friends” shows are a near-monthly staple of the Sacramento Punch Line and Cobb’s Comedy Club in San Francisco and are regularly packed thanks to his nonstop drive to promote. From Facebook and Instagram selfie posting contests for ticket giveaways, to video sketches based on current events that may have happened less than a day before, he’s easily one of the most consistently funny and recognizable local comedians.

I’ve seen him perform no less than 20 times in the last five years and his material rarely repeats. His early “mistakes” of not repeating jokes, ended up giving him skills to amass a monstrous array of subjects that range from skewering pop culture to helping a friend move. Sometimes it all just goes out the window and he’ll do some of the funniest crowd work I’ve ever seen.

On social media and on stage, he refers to himself as “The International Sex Symbol,” but Woods exudes an over-the-top charm and charisma that lives up to the hype. While sitting with him for the interview at East Sacramento’s Tupelo, there wasn’t a person that walked by that didn’t get a smile and a moment of his time. 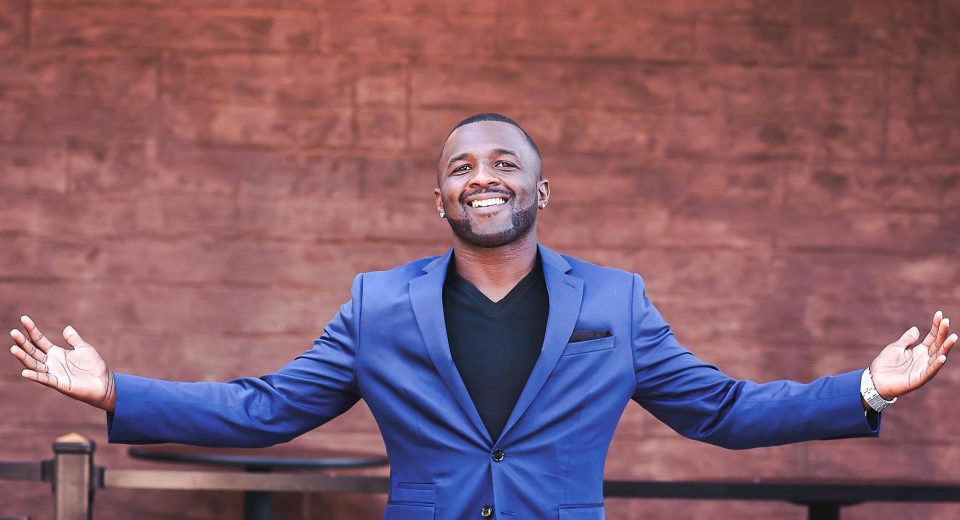 I was talking with the editor of Submerge, and we were both agreeing that it’s ridiculous that we haven’t done a story on Lance Woods yet.
I agree! Totally! Wholeheartedly! Every time I see the magazine I wonder why I’m not here!

How long have you been performing stand-up comedy?
My first time on stage was June 2, 2010. I didn’t understand what to do. In my first nine months, I probably got on stage three times, because I thought you could never tell the same joke twice. My first set ever was at the Sacramento Punch Line Showcase.

That’s unusual because it takes some time to get noticed and booked on that.
It’s almost like getting into Submerge! It takes time. You gotta put your work in [Laughs]!
I started comedy in my church, which was directly across the street [from] Punch Line. My pastor created an event for me to host called “The Uprising,” and I would do comedy and we’d get gospel singers, dancers and poets. I told my girlfriend I wanted to do comedy; she started acting like an agent and was looking up places on the computer. She said Punch Line had what she thought was an open mic. So I thought you could just show up there and just do comedy.

I told everyone I worked with and everyone at church that I’m going to perform. The doors open at 7, so I got there at 6:50 and the girl at the door told me to come back in 10 minutes. So I got there at 6:59:59 and I said, “How do you sign up for the show?” The manager said, “Who are you?” That’s the first time I felt this isn’t going to go how I thought it was going to go. The way he said it made me know I couldn’t sound like I was brand new, so I just said, “It’s me, Lance Woods! What do you mean you don’t know who I am? Baby I’m here!” He told me there were no sign-ups for the show.

I felt like the smallest person in the world. I start walking down that hallway and I start hearing that sad Titanic music playing in the background. Then I thought, “I can’t leave, I told everyone I was going to be here!” I remembered D.L. Hughley on the extras of that Kings of Comedy DVD said, “Back in the day, we used to have to fight just to get five minutes!” That stuck with me. I go back inside of the club and started talking to him.

He’s busy getting the club ready, but every time he’d come by and just say something new then walk away and was dismissive. Then at 7:40, I had like 45 people walk in right in front of the bar saying things like “Hey, Lance! Kill it tonight!” So he sees this [and] five minutes before the show he tells me I’m going up first. I didn’t know you were supposed to be nervous about that.

Comics get scared because they think the crowd isn’t warmed up yet.
The reaction was good and the material was good for the level I was at. The comics told me I did a good job, and I thought Hollywood was going to call tomorrow.

A month or two later I performed at A Toucha Class. Two months after that I did Laughs Unlimited. I met a guy named Andre Paradise who did a competition up in Oregon called “The Shades of Laughs.” This is when everything changed. I went out there, and out of 19 comics I placed fifth. These were really good veteran comics. We had six shows.

You weren’t doing any open mics at that point?
No … This was maybe my fifth time performing. I was doing OK, but there’s a level of confidence you feel when you deliver a joke because I wasn’t there yet. These other guys have been in the game 10 to 20 years. They were telling me, “You’re really funny, but you don’t have a clue what you’re doing on stage. We can tell you don’t perform because none of your jokes are finished!” I asked them how often they performed and they told me every day. They told me about open mics. So I got back and did at least 11 mics a week.

So a couple years in doing these mics, what’s different now?
The main thing was that I got the confidence in my jokes. I started delivering jokes with an exclamation point instead of a question mark. The question is no longer if they’re going to laugh, but how big will that laugh be.

Well, it’s like that reluctance to repeat material. Some comics get sick of their jokes. But you’re polishing up a bullet.
When comics ask me questions or run a joke by me, there’s nothing I can tell them. The stage will tell you.

I told a joke to a comedian in the car on the way to a gig at The Throckmorton Theatre [in Mill Valley] and he loved it and asked if he could use it on stage. Nobody laughed … just crickets.
The first time I went to Throckmorton I met Robin Williams. I was at the balcony. I was just going to watch the show, and Kevin Meaney was on stage. I hear to my right this laugh, and I looked and was like, “Is that Robin Williams?” Then he elbowed me and said, “This is funny, right?” We were just speaking about the bits from the background, just comic talk. 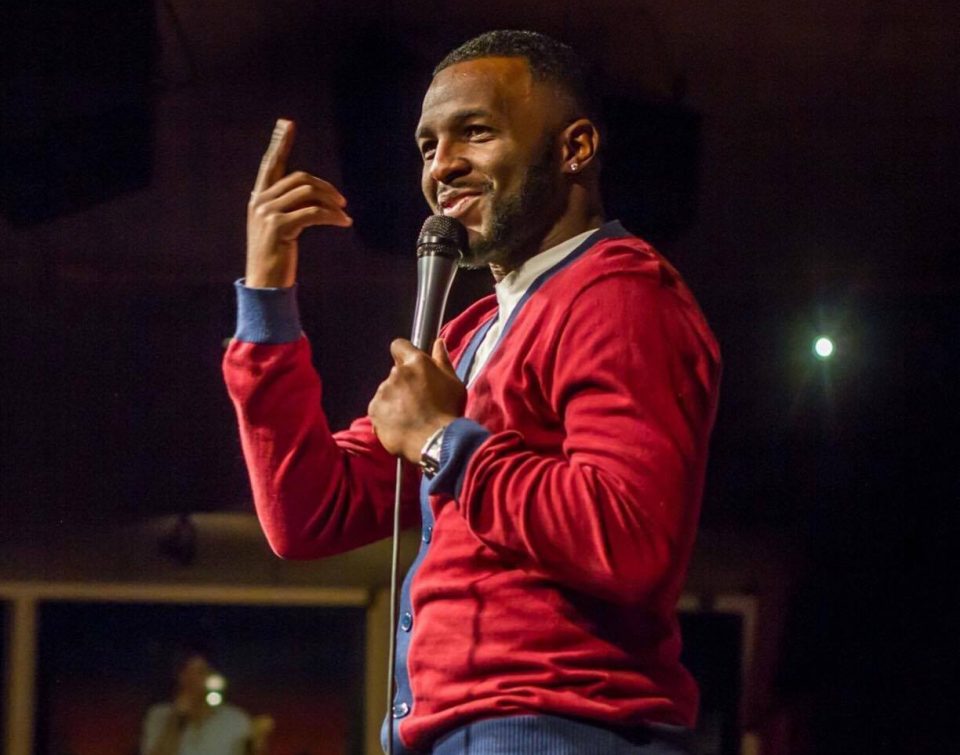 You’ve been producing your “Lance Woods and Friends” shows at Punch Line for about four years now. You always have a great draw and a great following.
I’m a special guy [Laughs]! Whenever you produce something, they are coming to see you. Some people just try and grab people that’ll get a bunch of people to come to the show, but they’ll never come back.

But it’s also a different show each time with you, too. You don’t have an hour-long set that I can nail down. If you had to from start to finish, you’d probably have hours and hours of stuff.
It’s a gift and a curse. I think what I do is good for live performance. I don’t know how it translates to television right now. That’s just another step that I have to look into. If I got a call to get on late night and do seven minutes, I don’t know what that seven minutes would be.

How would you describe your comedy to someone that’s going to see a Lance Woods show?
It’s honest and funny. I noticed that I had points where I was thinking something wasn’t funny enough because it was too wordy. I had to find the jokes in the funny things I was talking about.

You probably have one of the more broad material bases I’ve seen. It’s like there’s nothing that’s off limits.
The toughest transition I made was to be in front of “the hood” crowds. I was always just getting by in those rooms. It took me the longest to get good there. I had to up my level of aggression. My natural state is really chill. Sometimes you go to certain rooms, and you have to grab their attention. When I say “hood,” I’m talking about bar crowds. There’s black hood crowds and white hood crowds. Neither one of them want to hear what you’re talking about. You have to make them listen to you.

Your sketch humor and memes kill on Instagram. They’re really funny. So much different than stand-up. When did you start getting interested in that?
The higher you go, the more you see people ahead of you, so I saw a lot of guys with a million-plus followers, so I’m looking at my 21,000 as measly and pathetic. Every day they do a new sketch … every single day. They’re really good at promoting themselves.

You’ve had a lot of crazy experiences with fans.
I remember once at Punch Line I was on stage and some guy in the audience had a high-pitched voice. I couldn’t see what was going on … [mimics his voice] and he said, “All right, I’ll see you after the show.” I walk out and he’s there. He has a fresh out of jail look. He had a big upper body and his legs were weak like he’s just been doing push-ups and pull-ups for years. He had a style that looked like maybe he’d been away for eight years and he doesn’t know people don’t wear that no more.

Like a FUBU jacket?
Yeah! A FUBU jacket with one pants leg up. And he walked up and said, “If someone tells you they’re gonna be waiting for you, they really might be,” and just walked away. That was it!

Lance Woods will be bringing his “Lance Woods and Friends” show to Punch Line in Sacramento on Aug. 27 and Sept. 26, 2017. You can become one of his 21,000+ followers on Instagram at @lancewoods.