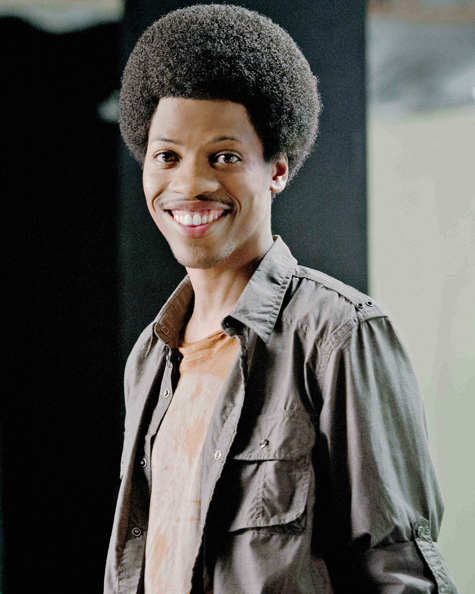 Sacramento Comedian Mike E. Winfield gets ready for the premiere of his new comedy/music mashup on FUSE TV

The first thing you notice about comedian Mike E. Winfield before he ever tells a joke is his smile. He has the kind of contagious, ear-to-ear grin that you can hear over the phone.

These days that smile might have a lot to do with the fact Winfield is counting down to the premiere of his new TV show, Off Beat, on the FUSE network Sept. 14, 2012, a dream he has been working toward his entire career. Winfield will host the weekly viral video music/comedy mash up with sidekick Mal Hall dissecting and analyzing the most outrageous music themed videos and viewer submitted clips (think “Chocolate Rain” and “Hot Cheetos and Takis”).

Off Beat features a heavy hitting production team including the legendary Vin Di Bona as one of the executive producers as well as creative consultant Mike Gibbons who worked on Tosh.0. “It’s viral videos that have a connection to music,” describes Winfield. “There could be someone at church dancing and they fall out the cathedral window. That could make the show.”

With the first season wrapped, and Hollywood notoriety around the corner, Winfield is still incredibly humble when speaking about his comedic roots and the path to his current success.

“In school I was hilarious to about three people only,” Winfield says when asked if he was the class clown. “I feel that everyone else knew me as Michael, the dude chillin’, trying to make the team.”

At points, growing up in East Baltimore, Md., was anything but comedic for Winfield. “I didn’t know how bad areas were where I lived until I got older,” he reflects back. “By eighth grade I was able to recognize that people were selling drugs on the block where I lived. I knew where not to get shot. I even knew how to spot an undercover vehicle.”

It wasn’t until moving to Sacramento after high school that Winfield would even step on stage for the first time to try his hand at stand-up comedy. His sophomore year at American River College, a small audience caught the first glimmer of greatness. Or something like that.

Three years later, after graduating from Sacramento State with a bachelor’s degree in English he is faced with the decision to enter the teaching profession or attempt stand-up comedy again.

“I built the courage to return to the beast,” Winfield says. “But this time, I actually write material, which is the difference.”

The rest is Sacramento comedy history.

“I just started going to open mics and hitting them every week until more shows and doors started opening.” This was 2004.

It feels lightweight clichÃ© to draw a comedic style comparison between Mike E. Winfield and Chris Rock, but the same charisma, originality and ability to relate to a crowd that made the latter a household name has propelled Winfield to where he is today. There is a definitive everyday feel to Winfield’s stand-up that he has maintained throughout all of his mainstream successes.

Since dedicating his life to the art of making a crowd laugh Winfield has been featured on BET’s Comic View, Comedy Central’s Live at Gotham, Showtime’s Comics Without Borders, Comics Unleashed, The Late Show with David Letterman and NBC’s The Office before being selected for his latest role as host of Off Beat.

The audition process for Off Beat started last year in Los Angeles when Mike E. Winfield and thousands of other comedians and on-air personalities of all kinds auditioned for the gig. It wasn’t until this past February that Winfield got word that he had beat out the competition and was Hollywood bound.

“It’s funny because I said, ‘I want my own TV show,’ but something like Off Beat I would’ve never planned,” Winfield says. “It’s weird because I don’t know what else I would be more fit for.”

Though he is the figurehead for a team of writers now, Winfield promises the same personal connection with the audience that has fueled his stand-up success.

“With Off Beat it feels so much like it is mine and people will really get to know me. They see so much of me just being myself so it’s more fitting than anything else I could even imagine.”

Now living back and forth between Los Angeles and Sacramento, Winfield is touring to promote Off Beat’s upcoming premiere. A comedian’s comedian, Winfield isn’t spending all of his time talking to morning news shows though. In fact, he is known for making impromptu appearances at local open mics from Sacramento to New York City. He explains, “Whatever town I find myself in, I’m trying to hit the stage.” 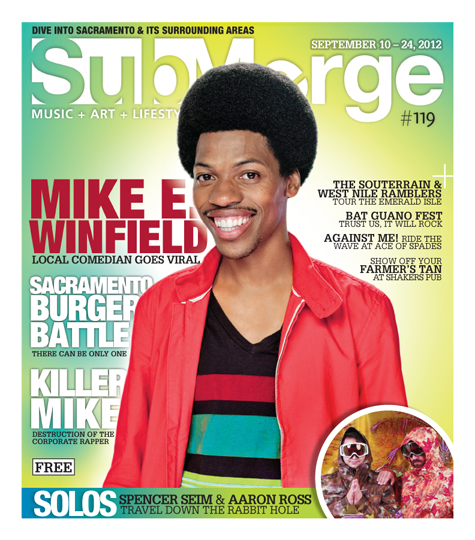 If you don’t Google him, you might spend an entire night hanging out with Mike before you realize that he’s sort of famous.

A few weeks ago, while back home visiting, Winfield dropped by a showcase at Luna’s Cafe, hosted by comedian Johnny Taylor, to do a set completely unannounced. “Mike E. is on the verge,” described Taylor, “but he’s different, because you know he’s one of those guys that really wants to bring the city with him.”

When asked how he plans to deal with the fame monster, Winfield jokingly responds that he has already scouted out a place to buy afro wigs to outfit his army of imposter drones in true pop star fashion.

“Britney Spears has to leave her house through some hidden chamber in the basement and has imposters that look like her,” he explains. “I have this place where I go get afros, throw them on people, and then have them leave before me.”

In reality, the gradual climb up the ladder of success has readied Winfield for the upcoming wave of (much deserved) recognition. “I feel like there was a set up for this,” he explains, “It’s a slow, gradual… BOOM.”

When asked his advice to aspiring comedians, there is no hesitation. His answer is immediate and fires off like a mantra. “Everything is about the work you put in,” he says, “I believe when you work hard at anything you see results even if it comes back to you another way. So it’s not talking about it. It’s doing the actual work. I’ll perform anywhere. I’ve performed at poetry shows, open mics and cafes. I’ve performed in the back of a vegan restaurant. If there is a microphone, I’ve been on it.”

It would be remiss to credit Winfield’s relentless work ethic and fail to mention his secret weapon, wife Kisha, who has stood by the comic’s side every step of the way and played the most important role behind the scenes. “September we’ve been married 10 years,” says Winfield. “The thing is we’re stronger than ever. She’s the one behind the scenes getting stuff done.”

Though his marriage is not off limits as fodder for his stand-up, it is clear that she is another reason for that famous smile. You have to respect and admire a wife that can truly support a struggling comic with showbiz dreams. And clearly Winfield does.

Mike E. Winfield will be back in Sacramento headlining at The Punchline on Oct. 4, 2012 as well as multiple shows over Thanksgiving weekend, also at Punchline. …And you never know where he’ll show up between now and then.

Keep up with Mike E. Winfield as Off Beat hits the airwaves and set your DVRs for the premiere Sept. 14th at 7 p.m. on the FUSE network. You can also follow his misadventures in viral video via his Twitter, @MikeEWinfield, and his website http://mikewinfield.com/. You can see Winfield live at the Punchline in Sacramento on Oct. 4. For tickets and more info, go to http://punchlinesac.com/