The video currently featured on Margaret Cho’s website is “My Puss.”
You have been forewarned—the comedienne’s humor is not for the prudish type.

“My pussy so fine that I flaunt it, your pussy so old that it’s haunted,” she raps in an Asian accent, sitting in a bubble bath with a teased fro across from co-rapper Diana Yanez. In other scenes she rocks a sweatsuit, as well as a bad perm and a onesy whilst rubbing her face against a wood floor next to a stripper pole.

I wouldn’t expect much else from the longtime outspoken comic, who starred in her own TV shows All American Girl and The Cho Show, continues to co-star in the series Drop Dead Diva, and has made appearances on Sex and the City, Seinfeld and 30 Rock, not to mention numerous film appearances. My first Cho exposure was sometime in middle school, when I stumbled across one of her stand-up routines on VH1. She was being really loud and raunchy and making ugly faces. Not long after that I found her featured in the back issue of the feminist publication BUST magazine.

My impressions were good. I was excited to finally see a fellow Asian woman in the public eye stirring controversy, breaking away from the dainty “Asian persuasion” mold. And in what better fashion than as an over-the-top comedienne?

For some reason I stopped following Cho for a while, so when I read up on the latest Cho news prior to our conversation, it seemed like she had only gotten more adventurous. She had since: tattooed the majority of her body, tried her hand at fashion design, dabbled in burlesque via her live variety show Sensuous Woman, wrote her second book (I Have Chosen to Stay and Fight), produced a musical comedy album and is currently in the process of working on another.

So imagine the slight disappointment I felt when, expecting to get a blast of the real Margaret Cho over the phone, I instead heard a very subdued and low-key Cho on the other end of the line. Why did she have such predictable, well-manicured responses to my questions? It almost seemed I was talking to a pre-packaged Cho, whose answers were stifled by…well, maybe overkill.

I get it, the woman is busy. She’s sat through dozens of interviews, and likely doesn’t have time to entertain or pal around with every writer she talks to. Check out more than one Cho interview, and you can see how many times she is pried on the same topics. Her sexuality almost always comes up (Cho is bisexual), in addition to her Korean mother, who named her Moran, which sounds an awful lot like “moron.”

Speaking of Cho’s mother, Cho is currently on her national tour, which she appropriately titled MOTHER. My Q and A session was limited to half-an-hour, because she had another interviewer waiting to talk to her at 1:45. Perhaps our interaction would have also been different if her publicist wasn’t listening on the line the whole time.

When we spoke, Cho had just performed in her hometown San Francisco, a show she summed up as “really phenomenal,” and had since moved onward to Los Angeles. After L.A., she was scheduled for shows in Denver, and then Chicago. But she stopped in L.A. first, because as she explained, the next day she would be making a small appearance on the set of Joan Jett’s upcoming film, Undateable John. She was thrilled about it.

“Any excuse to see her perform or hang out with her is amazing, I just adore her,” she said.

Oddly enough, she wasn’t sure she remembered the name of the film when asked about it.

I think, I don’t know the title as of right now,” she said, her voice trailing.

Well, the woman does stay really busy, so perhaps that explains the memory lapse. At some point in her schedule, she finds time to co-host a new online podcast series called Monsters of Talk with comedian Jim Short, most recently interviewing the likes of Joan Rivers, Kurt Sutter (maker of the TV series Sons of Anarchy), and musicians Billy Bragg and Frank Turner. When we spoke she was eagerly anticipating an interview with the long-standing alternative band Wilco.

“I’m looking forward to interviewing some of the guys from Wilco, which is a band that I really love,” she said. “We have very different types of people [on the show], but it’s always really fun.

“It’s just people that we like and a lot of it is social, too,” she adds. “If you’re a fan of somebody, like I’m a big fan of Frank Turner, who we just had on Monday, who’s a great singer/songwriter, it’s so great to be able to reach out to him and get to know him. He came over and we had a really great conversation.”

Earlier this year, Cho also started up her first Web series called In Transition. She stars as Tawny Kim in the dark comedy series about three women just out of prison.

Additionally, she just wrapped up her second musical comedy project, which she says will likely result in a double album, accompanied by a book. If the tracks turn out anything like how she described them, then listeners will be in for a wild ride, spanning hip-hop, country and dubstep.

This will follow her 2010 release of Cho Dependent, on which she not only sings but plays the guitar, banjo and dulcimer.

Cho is insanely well-connected in the independent music world, it seems. On Cho Dependent, for example, she was joined by guest artists like Ani DiFranco, Tegan and Sara, Andrew Bird, Fiona Apple and Ben Lee.

In fact, the most unmeditated response I got from Cho was when I asked her about Amanda Palmer (former frontwoman of the musical duo the Dresden Dolls), who she has been friends with since touring together in 2007. I asked if she had read Palmer’s written response to the well-publicized exchange between Miley Cyrus and Sinead O’ Connor. She hadn’t, but she did say this about Cyrus:

“My mother said, after she saw that performance, ‘Oh, she is shaking out all of her luck.’” (Imagine Cho imitating her mother in a deep, Korean accent.)

“It’s so typical of her to say,” Cho added, “because you know, with Korean people, they have a thing where, if you shake a part of your body, you’ll shake out all your luck… I was just disturbed because that guy, Robin Thicke, seems so much older than she is.”

If you have to peg Cho for a trademark, it is imitating her mom. Watch one of her performances, and you’re bound to hear her voice transition from well-spoken Valley Girl to native Korean, as her face morphs into an expressive old Korean woman.

I was sure she must catch herself exaggerating sometimes during her routines, just a little bit, at mom’s expense.

But, au contraire, she interrupts me mid-question and says, “No, no, no, that’s the thing. It’s actually a really accurate portrayal of my mom that’s actually really perfect. She has a really, really thick accent, and even though she’s been in America for a long time, she still totally speaks that way.”

And, apparently the family loves her impersonation, like most of her material, she says.

That wasn’t always the case, however. As she told Arsenio on the Arsenio Hall Show in early October, while she was taking her cues from comics like Eddie Murphy, Richard Pryor, Joan Rivers and Whoopi Goldberg on TV as a kid, her family didn’t get it at the time.

“I never really could explain to my family that I did comedy,” she said on the show, “because when I first told my mother I was going to be a comedienne, I was like 14. I said I want to do comedy and she said, ‘Maybe it’s better if you just die.’”

To my dismay, she had already told the same story about Cyrus “shaking out all of her luck” on that same night’s broadcast of the Arsenio Hall Show.

I guess I can’t blame Cho. She has to save the best for the stage.

Check out Margaret Cho in her element when she plays The Crest Theatre in Sacramento on Nov. 2, 2013. Jim Short will be opening. Tickets can be purchased at Tickets.com and range from $49 to $69. For more info, go to Thecrest.com or Margaretcho.com. 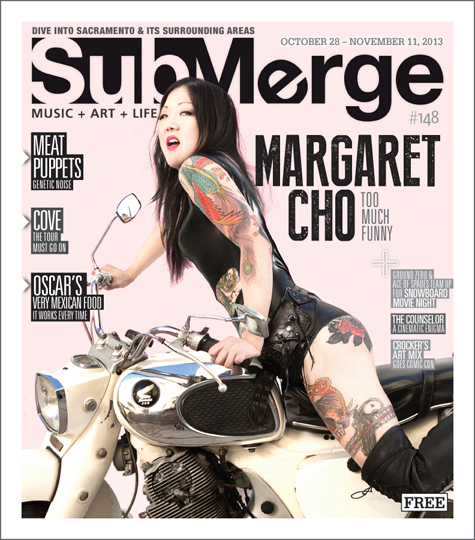