Comedian Melissa McGillicuddy Discusses Dirty Microphones, Pat Benatar and Why You Shouldn’t Invite Her on Your Next Camping Trip 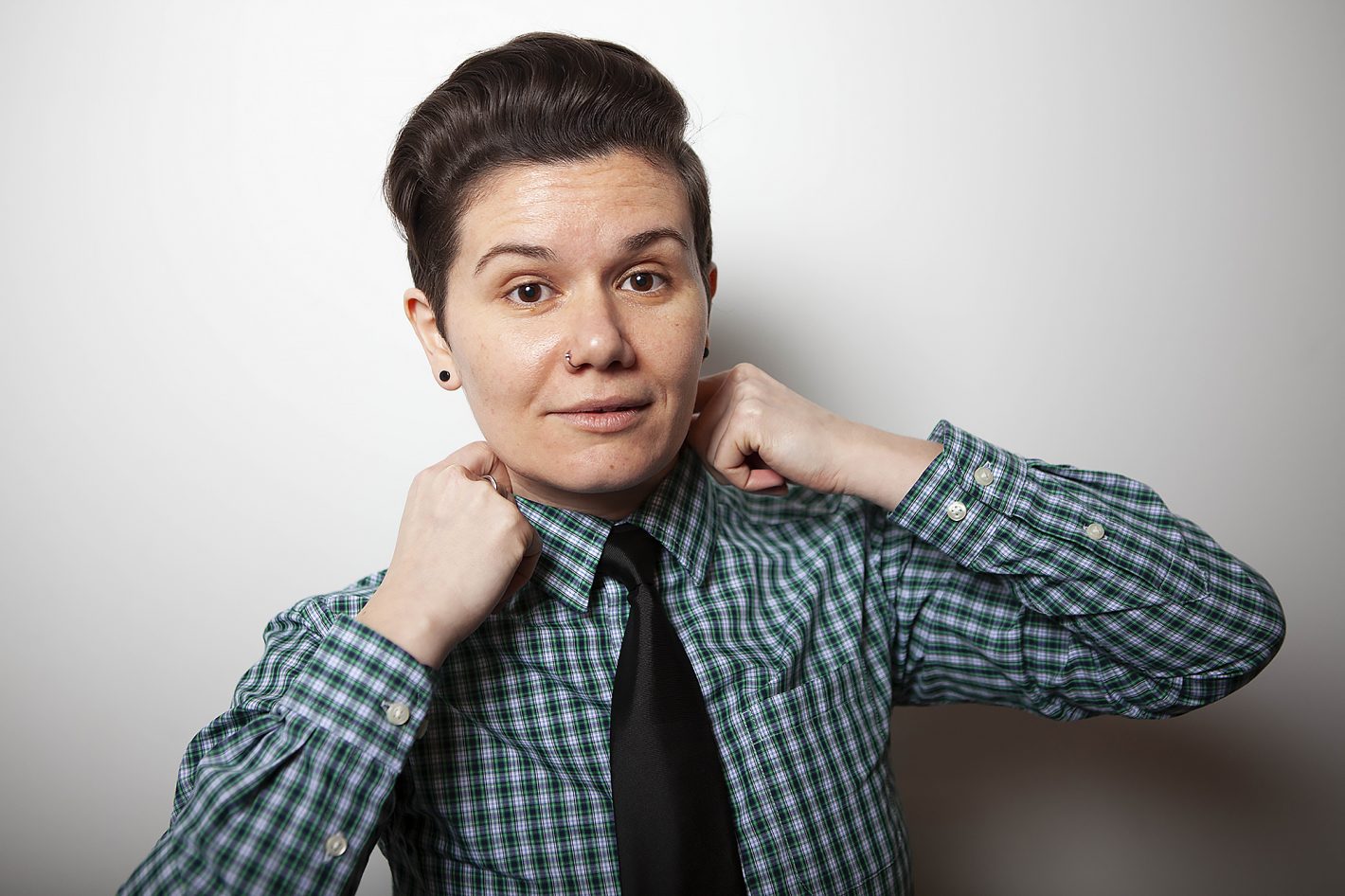 Melissa McGillicuddy hates camping, but she loves comedy. A part of the Sacramento comedy scene for more than four years now, she’s gone from an open mic performer to a leader in the community. Recently promoted to the role of Stand-Up Program Director at Sacramento Comedy Spot, McGillicuddy also co-produces FemmeFest, the pop-up Moving Van Show and the improv/stand-up hybrid Comedy Exchange. Top that off with hosting a comedy workshop and teaching weekly stand-up classes, she’s one of the busiest comedians in town. Known for material that is dark, racy and often shocking, I’ve seen her create a mixture of shock, confusion, and hilarity with a crowd that few comics can imagine. Whether it’s talking about accessorizing her black outfit with a black tampon while performing at a Satanic Temple meeting, or reminding folks how tasty we are to bears, her mixture of cute and revolting is hilarious. But her style has evolved.

McGillicuddy is well-loved and respected among her peers. Fellow comic Shahera Hyatt told me, “Her timing is impeccable, and you’d be hard-pressed to find a better host. She’s never afraid to have a wrench thrown in her spokes during a set; in fact, her quick humor thrives on it.”

Luke Soin, producer of Epic Tiki Podcast (which is filmed in a hot tub) says, “Melissa has a very unique and strong comedy mind.”

Comedy Spot honcho Brian Crall mentioned that she was a great producer and instructor citing, “Her work ethic, professionalism and ability to bring out the best in people make her the perfect fit!”

I’ve been enjoying her comedy since she started, and it’s been fun to see her evolve from a disturbing waif talking about “pussy eyes” and asking the crowd if anyone wanted to fuck her, to a more positive-minded performer who … still talks about equally gross stuff. A longtime Comedy Spot open mic host, McGillicuddy would often be the only one laughing when I told a joke with a punch line that involved my father’s semen. So when I was asked by the Submerge royalty to write an article about her, you can bet that I leaped at the chance. Full disclosure, I am performing on a show McGillicuddy produces on Aug. 16, but I was booked before I was going to write this, so it’s not like this is some fucking scandal or something. Sit back and savor this interview I conducted while I had a nut burger and she enjoyed a Cubano with jalapenos at Selland’s on Broadway.

So I understand that you’re a germaphobe. Is that true?
Where did you hear that from?

I heard once you were performing at Luna’s Café and the microphone touched your mouth and you were really freaked out.
It’s just so gross to me. That microphone. Everyone else’s mouth is touching it. I see a lot of people who put the mic on their mouth. That thing probably never gets cleaned. With that metal and stuff, how could you get in there and clean it? You’d have to soak it in alcohol or something.

Then you’d ruin the microphone.
Yeah. It hit my mouth during a set and everyone could just see how it impacted me at that moment. My whole face changed. Stuff like that grosses me out. I think I used to be way more of a germaphobe. I’ve just sort of accepted the fact that everything is disgusting and dirty. But I try not to touch the microphone with my mouth.

My same source said you were shocked to learn that there are not flushing toilets available when you go camping.
Yeah, I have a joke about that, too, about my friends and I going camping. I don’t ever go camping but I look like I should know a lot
about camping.

Why?
I think being a more butch lesbian there’s an expectation that I’m probably outdoorsy. This is just a look. I’m actually quite the diva. Some friends of mine talked me into going camping and to not worry because there’s a bathroom. That was my only criteria. But when we get there, it’s just a port-a-potty in a bigger room. It was gross, too. I’m not really the camping type.

I went a couple of times as a kid; we’d go up to Clear Lake. There was a campsite there and we camped a couple of times, but then we discovered hotels, then we were like, “fuck camping!” We never went back.

What was the day before you decided to try out stand-up comedy like?
I had a friend and she was also sort of an artist type, a musician. We both decided we wanted to start pursuing the arts that we were interested in, even if it was on a small and local level like an open mic. Even if it was nothing more than that. We didn’t want to look back on our lives and have never done it. She was a musician and she painted.

So she was a real artist.
Yeah. But we both had the same mindset of motivating each other and holding each other accountable. When I was younger I always wanted to be on Saturday Night Live. But now I’m like, well you know how realistic that is. I wanted to do something, even if it was just a hobby.

Were you funny in school?
I think so. I don’t know if you can believe it or not, but I was always awkward and not cool. I was pretty smart but I also had to work really hard to get good grades, so I couldn’t just walk in the day of the test and ace it. I put effort into doing the work. I remember in math class sitting by some girls that really didn’t get what was happening, so I’d make jokes to make the class go better. They were the cool girls, so for them to think I was funny was really cool. I wore a Stevie Nicks T-shirt and white corduroys so I was not cool. I thought combing my hair was overrated.

What decade did you go to high school?
It was in the late ‘90s.

Long past Stevie Nicks’ heyday for popularity.
Very much. I grew up on country and classic rock. For my 16th birthday I went to see Pat Benatar. I thought that was the coolest thing, but it was way past her prime. But here’s how old this story is; I went into a pager store, and the guy working there was kind of older and he was like, “Dude, where’d you get that shirt?” and I was like, “I got it LAST NIGHT! I saw her in concert!”

Your comedy has a fairly consistent style the four years that I’ve seen you perform, that funny dark, somber persona.
I don’t do any self-deprecating stuff anymore. I’m a big proponent that when you say those kinds of things you manifest them. If I say I’m sad and depressed, then I’ll get sad and depressed. Your subconscious doesn’t have a sense of humor. So I’ve gotten away from that a little bit. I don’t like to say anything that I don’t believe or don’t want to happen. There’s a bit where I talk about how I make poor life choices and I don’t even like saying that. I try to be aware of that kind of stuff. I do like dark stuff, though, so I definitely gravitate toward that.

Tell me about FemmeFest.
Brian Crall and Betsaida LeBron said they were putting together an all-female festival for the weekend. They wanted me to co-produce and pick the stand-up performers for it. We worked together to figure out what acts we wanted. We have such a great pool of folks from Sacramento, but we pulled people from Los Angeles and the Bay Area. I think there was a time when people would be against the idea of something called FemmeFest. Like, “Well men don’t have a Men Fest!” I was so pleasantly surprised to see that wasn’t the case. Everybody was so all about it and we even got spots on TV and Capital Public Radio wanted to interview us. I had never even been on TV before. It was so cool to see how that mentality had changed.

Why do you think that there are measurably more women starting stand-up comedy here in Sacramento than there used to be?
Well, over time more women have certainly trickled into the scene. Other women look in and see more women in here so more women will continue to get into it. It’s like a domino effect.

You used to ask the audience, “Does anyone want to fuck me?” Has that ever caused any trouble?
I’m surprised it’s not been more problematic for me. There was an incident where a guy came up to me after my set at The Comedy Spot and he put his arm on the wall next to me and was like, “I don’t mean to be creepy, but …” I don’t even know anything he said after that, I just walked away. Most of the time people are receptive and they cheer, but one time these people were booing me and screaming, “No thank you!” I had paid to get that clip recorded so you can hear it all. Normally I would say something like, “OK, Dad, that’s the right response,” but it was a competition so I just kept powering through it. But I don’t do that joke anymore.

It felt depressing to get on stage and tell the audience that I’m not having any sex. It comes back to creating that persona that I don’t want to have as my reality because I keep saying it.

Melissa McGillicuddy’s show Comedy Exchange will be performed at Sacramento Comedy Spot on Thursday, Aug. 16 at 8 p.m. You can also catch her at the LGBTQ Comedy Night on Friday, Aug. 30 at 9 p.m., and again on Friday, Sept. 13 as part of the FemmeFest Showcase. Both of those shows are also at Comedy Spot. Tickets are available at Saccomedyspot.com. Keep up to date with McGillicuddy on her website, Meowlissamcg.com.