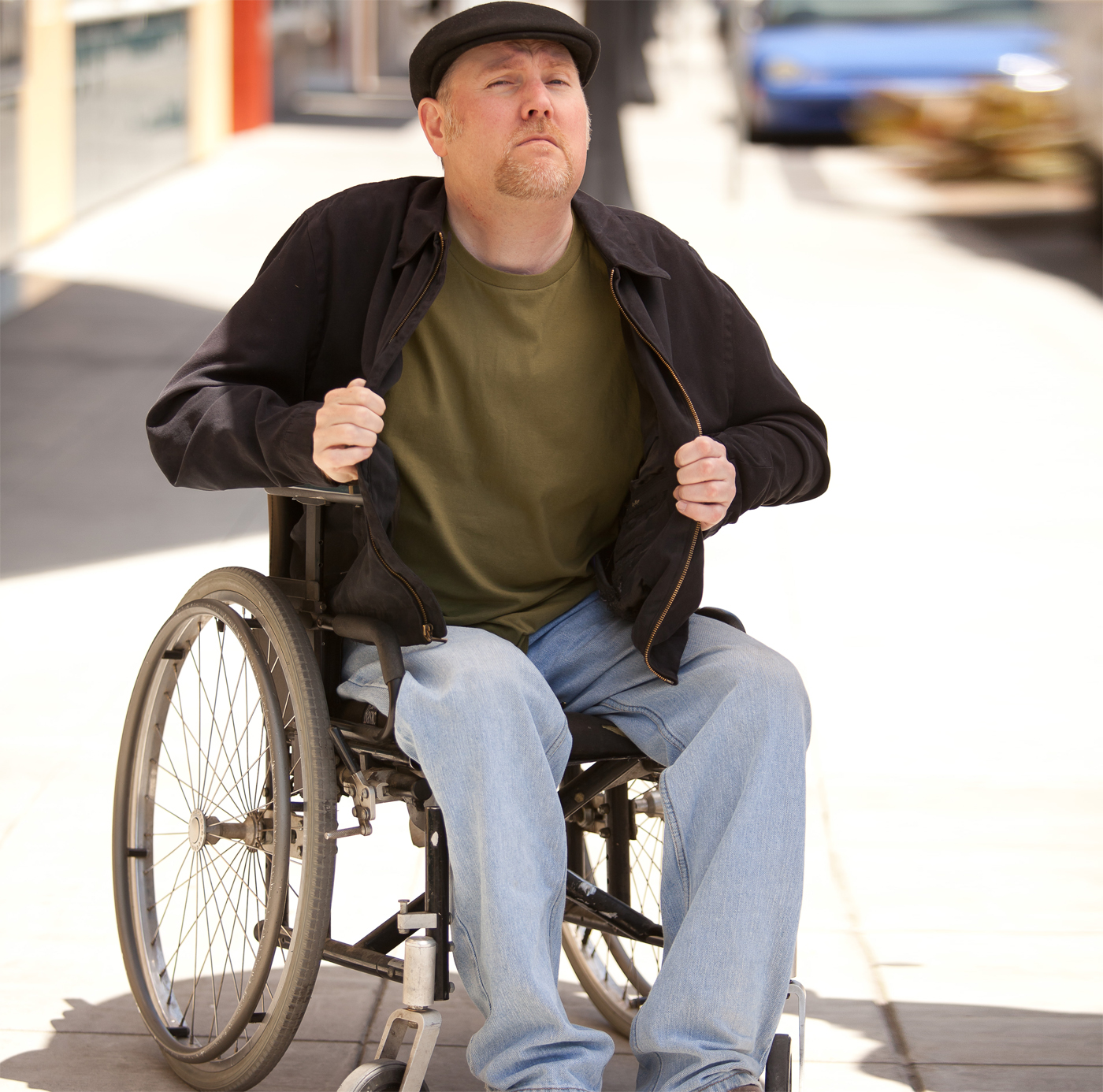 Editor’s Note: This article originally appeared in issue #152 (December 2013) in advance of Michael O’Connell’s Comedians with Disabilities Act performance at Sacramento Comedy Spot. O’Connell passed away on June 29, 2016, so we wanted to re-visit this interview to remember one of the brightest stars of the local comedy scene. RIP Michael! You will be missed.

Comedian Michael O’Connell has a simple formula for local comedic domination. “I’m not really making fun of myself, I’m really just making fun of you,” he says. The good ol’ reverse last laugh.

Michael has been fighting Muscular Dystrophy (MD), a disease that weakens muscular fibers and slows locomotion, most of his life. About four years ago, his symptoms became increasingly worse, and he had to rely on a wheelchair for mobility. After losing his job as an auto claims adjuster, Michael sought a renewed endeavor in comedy. He performed at an open mic, absolutely killed it and felt like his true purpose had been found: To use his disability as the base of his shtick, but to also use the podium to educate. “When that first performance was all done, I just was wondering why I had been missing out on this my entire life,” he says.

In the last few years, O’Connell has performed at colleges and universities around the nation, The Laugh Factory in Hollywood, and of course the Comedy Spot and Luna’s Cafe either solo or with one of his comedy troupes. With the help of fellow comedian Keith Lowell Jensen, Michael helped build the wildly popular “Comedians with Disabilities Act” comedy troupe—a group of disabled comedians who travel venues, poking fun not only at their own disabilities but at the people around them who act weird because of their disabilities. “I’ve had people think I’m homeless and throw dollars on my lap because I was just sitting in my wheelchair trying to enjoy the sun and eat a bag of M&Ms!” the soft-spoken comedian says right before indulging me in a stripper joke.

Submerge sat down with Michael near the Comedy Spot to talk about the past four years, the present and why we should all just laugh and find the will to find a way. 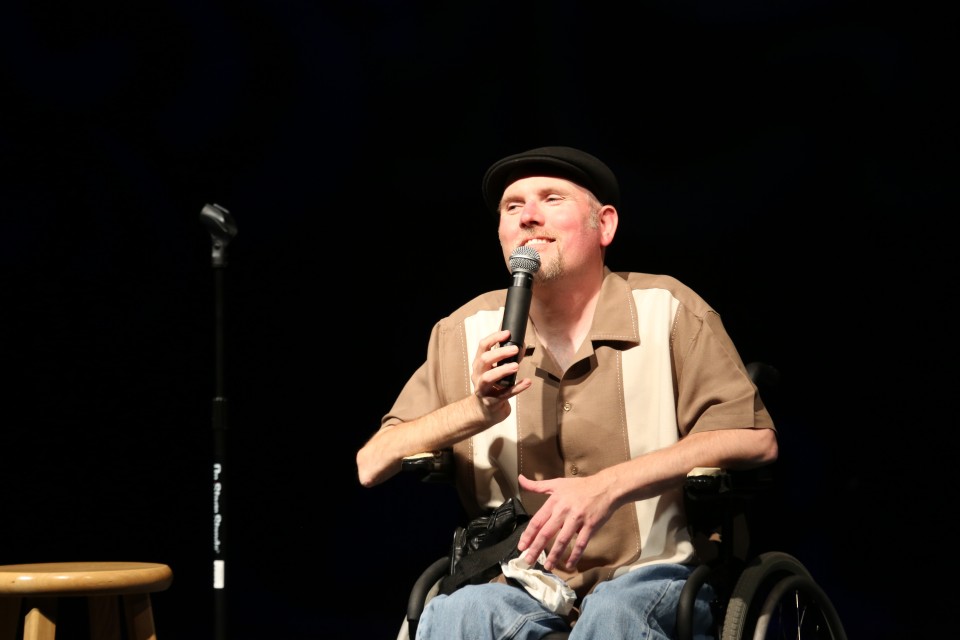 Can you remember the joke that broke the ice at your very first performance?
It was definitely the wheelchair lap dance joke. Sometimes people who work at businesses are a little patronizing to you, like they say, “Is there anything else I can do to help you?” in a really condescending way. And I look up at them and say, “Will you just finish the damn lap dance?”

You have MD. What are some of the major symptoms you have?
I was diagnosed at 2 years old, and there are a ton of different types of MD. Doctors didn’t expect me to be around longer than 12 years old and I’m 45 now. It’s a slow progression; I walked regular, then with a cane for a few years before the wheelchair. I have a bad heart, a pacemaker and only about 30-percent lung capacity. Of course it makes stuff I used to do way more difficult.

You have a 30 percent lung capacity and a show called Smokes and Jokes?
It’s a show where I tell jokes over cigars…and I do smoke cigars. You don’t inhale those, but I realize they’re probably still not that great for you. It’s just the last of my vices that I haven’t given up yet. It’s just my thing and let me have it!

How has MD changed your comedy performances?
In the past few years, things have been going downhill pretty quickly and started getting pretty bad. I can’t get out of the house as often or hit open mics like I used to. That sucks because I cannot get out there and connect like I want to, or see all of the amazing new talent I admire from Facebook. I can’t travel, which makes me miss some shows; but I do what I can and try to save my strength for the bigger shows.

Tell me about The Comedians with Disabilities Act.
The Comedians with Disabilities Act has gone national and was raved about in the SF Examiner recently. A lot of the time they have to perform without me. I’m getting a big surgery soon that will enable me to travel more with them and it has to do with bodily discharge…because I’m that dedicated to comedy. I have learned a lot from them, like what to say and what not to say. On the troupe, we have a little person, a blind man and a woman who stutters. We were on Laugh Factory live on the Playstation network for a while, and our shows usually sell out. Each one of the members are unique and hilarious; there is no other comedy experience like it.

How do you want your audience to see you?
I have a unique niche in comedy as someone in a wheelchair with big motor skills. I’ve gone through a few different phases of how I want to present myself. I’ve gone through dark humor, which was completely not me. I found a comfortable place in finding humor in the little things I go through and the people who are around me when they happen. My goal is to have people laugh along with me rather than to feel sympathy.

How do you poke fun at other people using your disability?
Well, people always want to do weird stuff like tie your shoes. I stopped wearing shoes with shoelaces because people would just randomly kneel down and try to tie my shoes. People often think I’m homeless, which is also a little awkward because I’m usually just trying to sit there and enjoy my surroundings. Also, people like to come up to me just to tell me they know someone in a wheelchair; I suppose it’s their attempt to empathize, and I totally see that.

Does stuff like that ever make you upset?
No! Some people are just too darn sensitive. As a disabled person, I know all of that stuff comes from a good place. I may make fun of all those people, but I definitely see where they are coming from and I appreciate it. There are some angry disabled people out there. I just see a lot of stuff as funny.

How has your experience been working with the Sacramento comedy scene?
Absolutely fantastic. Other cities are just not as funny as Sacramento. I have had amazing mentors and the comedians here are just close-knit and understanding.

How was performing at the Laugh Factory?
I got to perform in Hollywood for several celebrities in the audience whom I will not name drop here, but I will say that they are awesome. After my performance at the Laugh Factory, Dane Cook was supposed to come on. Instead of staying for that performance, I ended up at a place across the street smoking cigars with these celebrities and bonding. Nights were made.

What is the main message of your performance?
My MD is getting worse every day. I want people to know that they have a choice. They can focus on the crap or focus on the awesome. If you can’t do certain things anymore, then find a way around the obstacle; For example, I couldn’t use the shower like I used to, so I installed bars. I have problems in my life, but I could choose to let that define my life or not. No one ever found happiness focusing on the bad things, so just laugh and always find a way.